Before anime became so mainstream that Netflix and Disney got into a bidding war over the streaming rights to Naruto, the genre was largely confined to children’s programming (Yu-Gi-Oh!, Beyblade and Digimon) or late-night blocs on the Cartoon Network (primarily Toonami). Meanwhile, die-hard fans who wanted the series that were popular in Japan had to torrent them, risking viruses or fines, or find bootleg DVDs or VHS tapes.

The latter obviously were more often than not still in Japanese, and therefore, incomprehensible to most fans living in the English-speaking world. Inevitably, this meant that English-speaking fans, enthusiastic to share undiscovered anime to others, created their own “subs” (i.e., subtitles) and “dubs” (i.e., voice dubbing).

And this is where it all goes to hell. 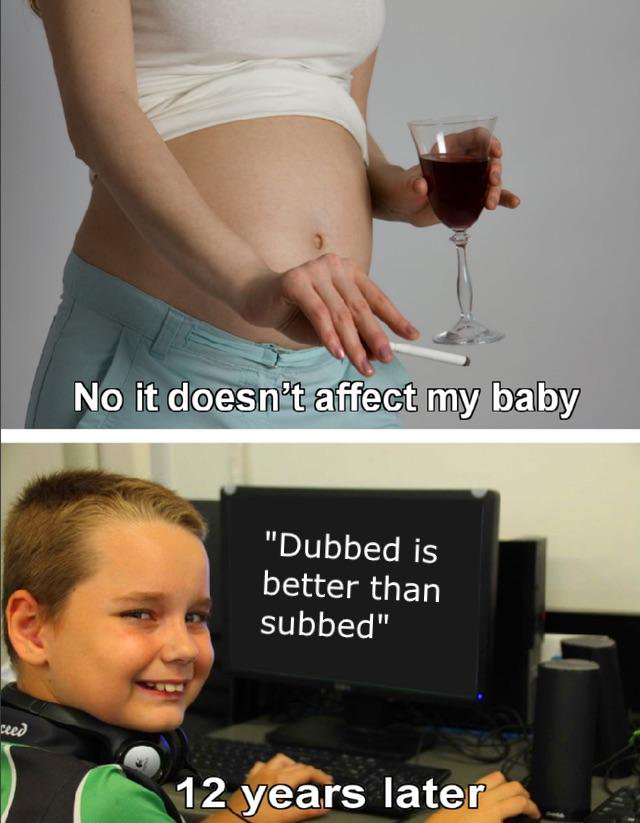 See, while anime fans are united in their love for giant robots and melodramatic dialogue, many believe that watching anime in anything other than Japanese (or in “sub” form) is a betrayal. So much so that those who prefer dubs have been labeled “cucks.” In fact, some sub devotees believe that dubs — especially those created by fans — are “opting to watch a kid’s show” (at best), and deliberately misleading and misinterpreting storylines (at worst).

That, however, hasn’t stopped a growing number of people from making their own dubs — sometimes in ways that purposefully deviate from their Japanese translation. “I started making my own dubs because I was always into how exaggerated the anime I watched [in Japanese] was,” explains A.J. Lapis, who posts fandubs on his LandofLapis YouTube channel.

The Bay Area native creates them with friends, using podcast-worthy microphones and Adobe, where he can edit the audio, add effects and align it with the video. For him, dubbing is a hobby that he doesn’t take too seriously, but he does note that some of his viewers have become anime fans through his videos. “That shows that dubbing is pretty useful,” he tells me. “I don’t go out of my way to get more people to watch anime, but I do think it’s less intimidating for a first-timer than watching subtitles.”

That said, Lapis has no personal preference over subbed or dubbed animes, and he’ll gladly watch both — no matter the pitched battle between the stans of each. “Even back in the torrenting days, anime obsessives would say things like, ‘Dragonball isn’t real anime,’ or they’d dismiss people who liked anime they thought was mainstream. They’d even say that classics like Ghost in the Shell or Akira were for ‘n00bs.’”

Mostly, though, they’ll argue that subs preserve the original form of the anime and treat it with the proper respect. As a 2016 Inverse piece argues, watching anime with subtitles means that Japanese honorifics are respected. For example, in the official English dub of Naruto, the term dattebayo is translated to “believe it,” despite the Japanese translation being the more casual “well” or “y’know.” Similarly, because the Japanese language places so much importance on suffixes like kun, san and shin, which are used to indicate a character’s relationship to another, dubbing the anime in English, especially by someone unfamiliar with Japanese, could mean that a character’s true feelings may be lost in translation.

This, then, is where voice actors come in, says Stephanie Sheh, an L.A.-based actress and one of the English-speaking world’s most notable voice actors in anime. Sheh, whose voice can be heard in Sailor Moon, Naruto and the critically acclaimed anime movie Your Name, tells me that professional dubbing not only requires an actor to emotionally understand and relate to their character, but also demands a technical and linguistic knowledge of dubbing.

“Some of the big studios and anime distributors have their own in-house dubbing, but in most cases, the dubbing is outsourced to sound studios or to individual actors,” Sheh says, adding that the technical process requires performers such as herself to precisely match their lines in English to the mouth movements of their character and to adapt their lines to best capture the emotive elements of an anime dialogue. “There’s a lot of work that voice actors have to do, even before they start recording, so that they can do justice for their character and for an audience that cares deeply about the show.”

But when it works, in her opinion, it brings the viewer a far more direct relationship with the actor — a bond she says is readily apparent in the long lines that greet her whenever she attends anime conventions. “The fandom expands from being about a specific character to include the person who voices the character and even the production crew behind the anime,” she explains.