The Forever War Between Cops and Firefighters

As with most conflicts these days, the fiercest clashes happen on a digital battleground, with memes the chosen weaponry

This month witnessed a breakdown of municipal trust in the city of Troy, Michigan: Some 20 police officers admitted to entering a local fire station and thieving snacks from a locked pantry. Seriously, there was an internal investigation and everything:

The problem, or so the investigation found, was that after the fire station had been remodeled, the firefighters’ snacks were moved “from an open area in the kitchen” to the pantry in question. The cops, accustomed to snack access in their “working relationship” with the fire department, didn’t realize they no longer had authorization to satisfy their munchies in this way — and all had to be “disciplined” for the infraction.

Now, the Troy Police Department insisted that they remain on great terms with the Troy Fire Department. But let’s be realistic. This was one more act of aggression in the ongoing secret war fought by cops against firefighters, who pretend to be simpatico as emergency personnel despite their status as natural enemies.

Even the subtle distinction between our “finest” and “bravest,” as the respective professional classes are commonly known, hints at this friction. Oh, they love to pretend the rivalry is all in good fun, usually by sparring in allegedly casual softball games. Ask yourself, though, if you really buy such camaraderie. The cop-firefighter rugby match toward the beginning of Martin Scorsese’s The Departed, after which Matt Damon calls the firefighters “queeahs,” feels much closer to the truth of the dynamic, if not the sport itself.

That Damon’s character is (spoiler alert) a mole for the Boston mob also reminds us of a key divide: Cops, in dealing with crime, are seen as corruptible, while firefighters generally don’t take kickbacks for ignoring major conflagrations. This was also a trope of the cult-favorite comedy series Reno 911!, in which firefighters were portrayed as the attractive, moralistic foils to the bumbling, bigoted, self-destructive sheriff’s department. The firefighters’ relative purity is likewise conveyed by the prominence of their beefcake calendars versus similar “hot cop” merch — not to mention their role, sneeringly alluded to by Damon, in rescuing adorable animals of all kinds. Hard to compete with that!

What is a cop to do? Especially in light of their well-deserved reputation for, um, killing unarmed and mentally ill people? There are a couple of routes to go, judging by the “cops vs. firefighters” jokes I found, and it turns out Damon’s line of attack isn’t uncommon: “If you need your cat saved, call a fireman. If you need your ass saved, call a cop,” is another version of the jab. A bit off the mark, as I see it — firefighters do save quite a few asses. I prefer when the police smear the firefighters as lazy for lying around the station in want of a call. An especially good one: “How do you know when a fireman passes away? The remote falls out of his hand.” Even better are the disses that nail firefighters for their juvenile pyromania: “What is the difference between firemen and Boy Scouts? Boy Scouts have adult supervision.” Man, they’re gonna need ice for that burn, and it’s not without merit: In 2013, Spanish riot police grappled with firefighters who were evidently starting blazes to protest austerity measures in the Catalonia region.

Yet, as with most conflicts these days, the fiercest clashes happen on a digital battleground, with memes the chosen weaponry. Here, there are no laws or limits. Each side aims for the jugular — intelligence, incompetence, sexual prowess, cowardice. As an internet rabbit hole, there’s nothing quite like it: straight normie-on-normie violence. 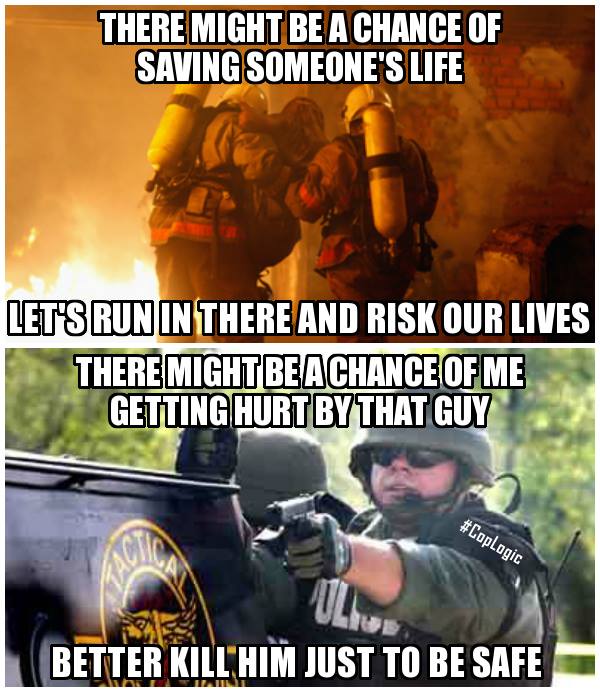 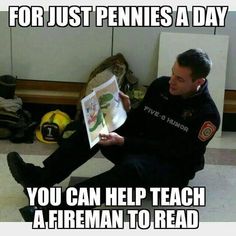 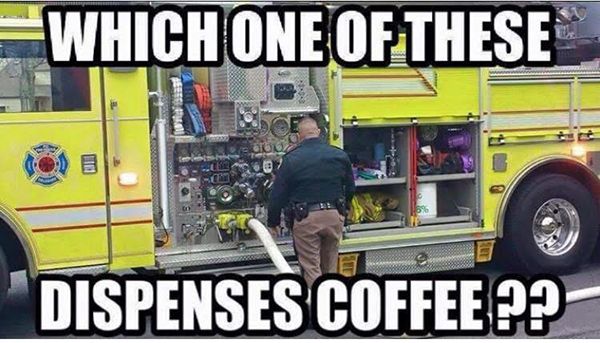 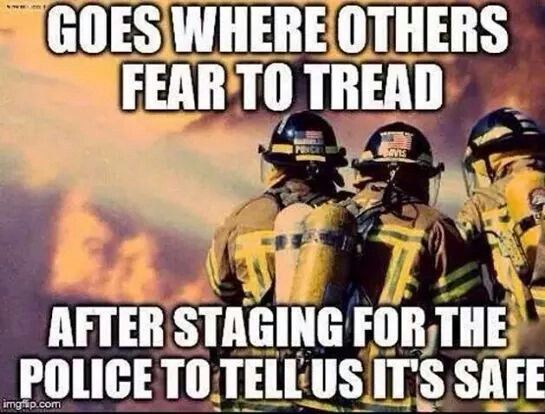 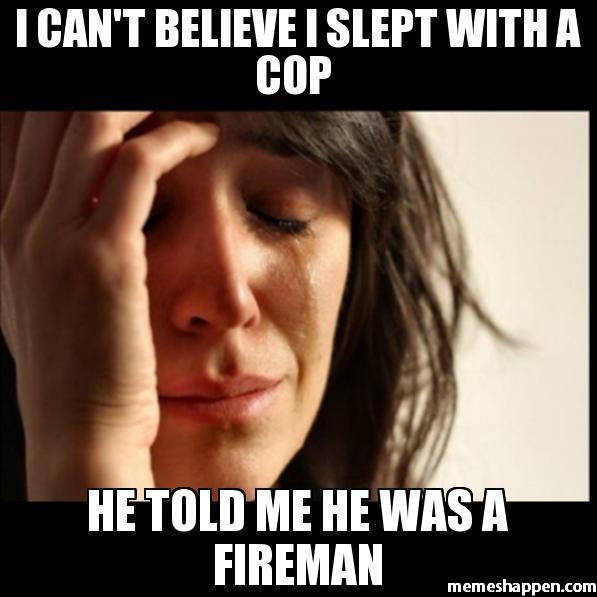 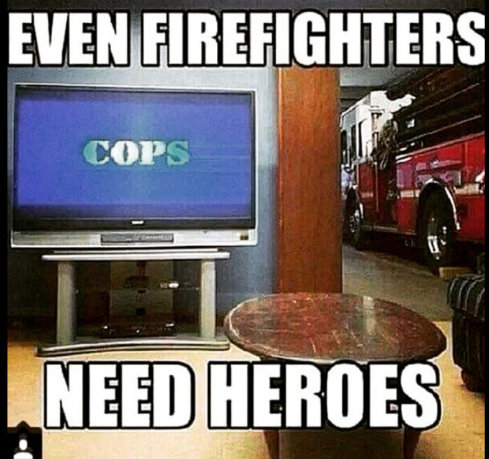 What is it like to be trapped in this existential stalemate with people in a career parallel to yours? Only cops and firefighters can say for sure. The closest thing I could imagine in my own world is a disdain for the publicists who flood my inbox with terrible story pitches (and, very rarely, a good idea that I begrudgingly accept), while I’m sure the publicists have few kind words for the snooty bloggers who won’t reply to their emails. But that antagonism would still pale beside the animus firefighters and cops share.

Can this dispute ever be settled? Perhaps by measuring conversion. Tim Dees, a retired cop (who actually did work in Reno!) writes on Quora that in his experience, cops will quit to become firefighters — never vice versa. Career firefighters, he says, “work about 12 days per month, they make at least as much money as the cops (most places), they often sleep as much as a third of the duty hours, and they can work out and wash their cars while their on duty.” As a result: “Cops are often envious of firefighters.” 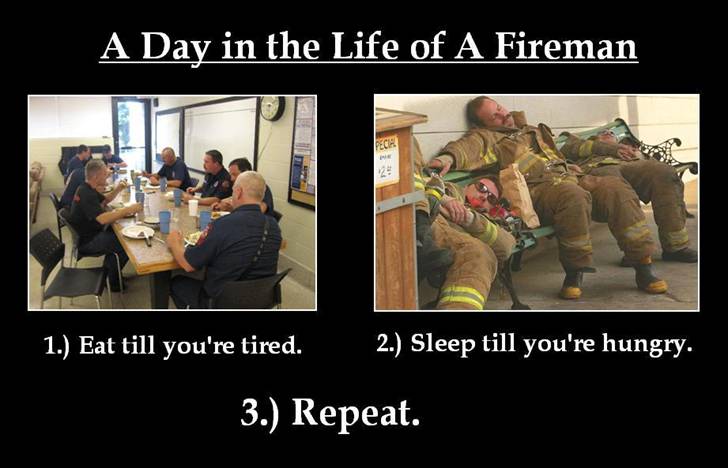 A better job, however, doesn’t mean that firefighters are better. It doesn’t resolve the heart of the schism. Luckily — and unusually — there is a third option that satisfies.