In the upcoming live-action ‘Sonic the Hedgehog’ movie, Sonic’s wit, speed and cursed, gaping maw are on full display

Teeth. Teeth. TEETH. Sonic the Hedgehog has human teeth. He runs fast, he has jokes, and most of all, his mouth’s full of teeth. In the trailer for the upcoming live-action Sonic the Hedgehog film, Sonic’s wit, his speed and his cursed, gaping maw are on full display.

Molars, cuspids and all the other teeth. TEETH. LOOK AT THE TEETH.

And yes, it could be argued that this movie is for children, not thirtysomething wet blankets on Twitter. But I will not look past those teeth.

There’s something about a mouthful of human chomper bones on something decidedly not-human that lodges itself in my brain until I need to proverbially floss it out.

IMO, live-action Sonic’s legs, eyes and body could use a do-over too. But why is it that human faces (case in point: Detective Pikachu) and especially human teeth freak people out? Why is it so alarming that Sonic the Hedgehog has entered the uncanny valley?

And at the very least, does Sonic take care of his little Chiclet chompers? We reached out to a few people in the oral industry to find out.

Why Not Actual Hedgehog Teeth?

Why couldn’t the animators have given Sonic animal teeth? After all, there are subreddits dedicated to dog teeth and cat teeth — r/toofers and r/teefies respectively. We like animal teeth; they’re cute!

Moreover, why not actual hedgehog teeth? Dr. Gary Glassman, a dentist in Toronto, says, “real-life hedgehogs can have up to 44 tiny teeth: incisors, premolars, molars and canine teeth just like us.” They get these teeth at three weeks old, he explains, which means they have a mouthful of little razors their entire lives.

And while hedgehog teeth allow the animals to “easily able to grab and chew their food,” Glassman says, “they are easily prone to staining and accumulating a lot of plaque.” In other words, if Sonic animators went whole-hog on making Sonic’s teeth realistic, it would look like a mess: Real-life hedgehog teeth are disgusting.

It’s for this reason Glassman argues the movie went fully in the opposite direction. “If you look at a picture of a real hedgehog with its mouth open and sharp brownish teeth showing, you will notice how angry and scary it looks,” he says. “Now imagine that on the big screen. It could be very frightening, especially for children.”

We grown-ups “are most likely taken back by this look because it doesn’t look natural,” the Toronto dentist adds. But “since the movie is a family movie, and Sonic is meant to appeal to a younger audience,” Glassman concludes, “I would say that the studio decided to go with a more child-friendly look for its main character, and did so by humanizing Sonic’s teeth.”

Frankly, I think kids are going to hate it even more.

Sonic’s Teeth Are Too Human

Dr. Greg Grobmyer, a dentist and mental health coach in Tennessee, says Sonic’s teeth “seem creepy for a few reasons”: “First off, no other animal has human teeth. We are unique in the way we are made,” he says. “Whether you have consciously had this thought or not, you know it to be true. If you saw human teeth on a bear, a fish or any other animal that ‘shouldn’t’ have them, it would be unsettling. We are expecting a certain thing, and when we see something else, it disturbs us.” In the same way removing Will Smith’s nipples makes his Genie a little more bearable, perhaps Sonic’s teeth are just too close to ours.

Grobmyer argues that the realism that comes with CGI makes it even worse: “Human teeth on a cartoon bear don’t bother us, because our subconscious realizes nothing about it is real,” he tells MEL. “With CGI, there is a phenomenon called the uncanny valley. It’s when a thing looks mostly correct, but something is just… off.”

What is “off” in Sonic’s mouth, exactly? “The shape of the dental arch is a perfect half circle instead of a horseshoe shape like every other creature in the universe,” Grobmyer says. “That just doesn’t happen. But they are digitally colored like human teeth, with translucency and everything. They aren’t opaque-white like in the cartoon version.”

He goes on: “Additionally, the front teeth all look somewhat alike. They are basically the same size and length, which I could live with, but there are no real canine teeth. Those are the pointed teeth at the corners of your mouth. Most animals, at least omnivores and carnivores, have pronounced canine teeth. This guy has basically none. It bugs me. He doesn’t need to look like a vampire, but he needs SOMETHING there, not just another incisor.“

Grobmyer compares live-action Sonic to the movie Polar Express, which features animated kids that look… slightly human. “The kids look real enough that my subconscious tries to make sense of what is seen, but it just isn’t quite right. It leaves you with a disturbed feeling.”

Sonic looks a lot like the creepy kids running around in Polar Express, Grobmyer adds. “Although Sonic isn’t humanoid, … Sonic’s mouth is just off. It’s not what we thought we would see, and our subconscious brains are trying to make sense of it.”

For example, Stitch of Lilo and Stitch has sharp chompers, but he’s fully a cartoon.

On the opposite side of the spectrum, the live action Goombas of Super Mario Bros are, well, not so cute: Just imagine the dumpster fire Twitter would’ve been had it been around when that movie came out.

Despite the CGI and realistic facial features, Grobmyer says, Sonic’s teeth “are only vaguely human.”

“The arch is overly wide and a perfect half circle,” he says. “The teeth are straight across and the front teeth are all identical. We recognize it as trying to be human, but it’s not. It’s creepy.”

Anastasia Turchetta, a registered dental hygienist for 28 years, says Sonic’s teeth look like “a perfect set of primary or baby teeth,” which might be a little off-putting as well.

“Trustability, approachability and likability are known to align with a nice smile,” she says. “Now, add hero ability. With which smile will Sonic save the day at the box office?”

And if you want to be truly scientific, maybe Sonic somehow has some human DNA in him. “Fun fact: SHH is a protein in humans called the Sonic hedgehog gene,” Turchetta tells MEL. “It has a major role in craniofacial development — including tooth development!”

In sum, Sonic’s teeth are a little too human for a hedgehog, but at the same time, they’re not human enough — and they look like baby teeth. There’s a lot going on. But are his teeth at least healthy?

We reached out to the American Dental Association to find out. Dr. Tyrone Rodriguez, spokesperson for the ADA, had this to say: “I’d have to examine Sonic’s teeth to be sure, but they do indeed look healthy. Sonic likely does what we all should — brush our teeth with fluoride toothpaste for two minutes twice a day, clean between our teeth once per day, eat a healthy diet and see a dentist regularly.”

How Should Sonic Look Instead?

But knowing Sonic takes care of his human teeth doesn’t dislodge them from my brain. I need a new image of Sonic in my brain so I can stop thinking about him forever. So I reached out to Curt Chiarelli, one of America’s greatest monster creators — he’s worked on James and the Giant Peach, the Mortal Kombat video game and Robot Chicken — to see how he would’ve created the speedy hedgehog.

“Re-interpreting characters from one medium to another is always a tricky proposition,” he starts. “Especially in the case of a character as popular as Sonic, it’s a minefield because the potential for alienating his rather sizable fan base is enormous.”

Still, Chiarelli says, he “can agree with the fans that his chompers now look too human,” and that the “oversized Chiclet look might have been a better choice.” 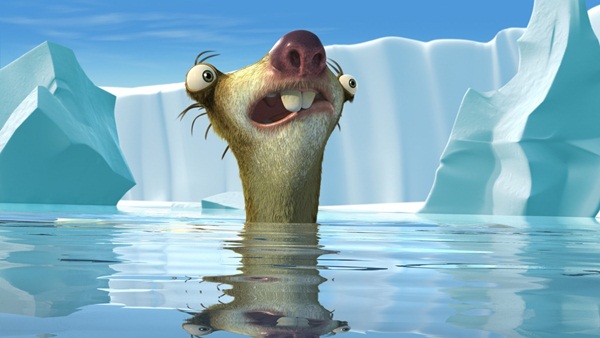 Chiarelli adds that it’s not just the teeth, but the overall look that sets people off. “In my opinion, the elements of Sonic’s new look that violate his unique, original design aesthetic the most are his eyes and legs,” he tells MEL.

“The old uni-eyeball look is gone and is now replaced with two anatomically believable eyes. But in re-configuring them, the designers have also shrunk their diameter and in the process lost much of the expressive, neotenous charm of the character. And his new set of human legs are not aesthetically compatible with the rest of his cartoonish body.”

In summary, he says, “it’s a mishmash of approaches that doesn’t quite mesh. The lessons of Masahiro Mori‘s Uncanny Valley Hypothesis apply here: The filmmakers responsible for Sonic’s re-design are pushing this character too far toward an anthropomorphized version.

“Sometimes the wisest move is to do nothing and leave well enough alone.”