How do you tell your kid with Asperger’s you used to shoot and kill these huge birds yourself?

Robb Stewart is the owner of Calthan Cattle Co. in the small rural town of Seymour, Texas. Born in North Central Texas, Stewart grew up immersed in life on the ranch and later chose to continue a family legacy. Stewart is the second in a trio of people we’ve interviewed who bring a uniquely cultural perspective — and dish — to the Thanksgiving holiday.

When I was growing up, we had to kill many of the things we ate. I grew up eating quail, dove, deer, wild hogs and beyond. This was North Central Texas, and we weren’t in a town, but rather out on the range. And one of the animals that always came around was turkeys.

When I was young, my dad usually shot a couple of turkeys and served the meat for a Thanksgiving dinner. When you feed cattle, sometimes the turkeys will come afterward and pick at the scraps. You’d see these gobblers come around the hay pile, so it was pretty easy to get you a turkey while on the job. I remember him smoking up a couple breasts at a time. I have nostalgia for those days being good — where everyone ate together instead of being in a hurry and having to be somewhere.

Wild turkeys aren’t giant like the ones you buy at the grocery store. The grocery store ones don’t really have a taste, compared to wild turkey. It just seems like they bred these birds to produce four pounds of breast and taste like nothing. It’s completely different when you try the wild ones. It’s not a gamey taste — it’s just… different. It’s more.

The first time I shot my own turkey was when I was 16. I don’t know if it was for Thanksgiving, but it was around November. I was actually out coyote hunting, and for a predator like a coyote, you blow into a call that makes you sound like a rabbit that’s in distress — coyotes are attracted to the sound. But on this day, for some reason, the gobblers kept answering my call. Every time I blew it, sounding like a hurt rabbit, I’d hear a bunch of gobbles. They came off their roost and kept coming, so I decided to shoot a turkey that day.

I think about the act of killing an animal because I’m 56 years old and my kids are in college. I see how that generation thinks that food comes from the grocery store. There’s not much thought in a lot of people about how it actually gets to that store. Even my kids, who grew up on a ranch where they watched calves be born, get big and go to the feed yard in Kansas.

I remember talking to my son, who has Asperger’s, about this. He felt a connection to animals that most of us ignore. He could understand their visual cues more so than people. I remember his asking me where we were sending the cows: Why did they have to leave? That kind of stuff. It really hit me in the heart because his concern was, why do we do this? I told him the animal will become food for a lot of people. He’s grown up eating steak and hamburgers — that’s all he liked. But for him to really make the connection that what he was eating were these animals we raised, was a challenge he had to work past.

That moment reminded me that we need to take care of these animals when we can, provide a good home, make sure they don’t want for something and protect them when the weather’s bad.

So yeah, I think it would be a good thing if people grappled with this more. But I have a lot to be thankful for this year — I’m glad almost everyone in our family will be together. It’s harder when kids move away and go to college, or when you’re trying to alternate hosting with the in-laws. Still, Thanksgiving is a good day to slow down and think about the blessings. Nobody in the family is off fighting a war somewhere.

To be honest, now that my kids and parents are older, I’d say 90 percent of Thanksgivings lately we just cook ribeyes on the grill, maybe with some jalapeño peppers stuffed with cream cheese and wrapped with bacon. A couple of baked potatoes and a pecan pie, too. It’s easier to clean up that way [Laughs].

The wild turkey breasts are something else, sure. But the only thing about Thanksgiving that’s never changed in our house is that we all watch the Dallas Cowboys game. 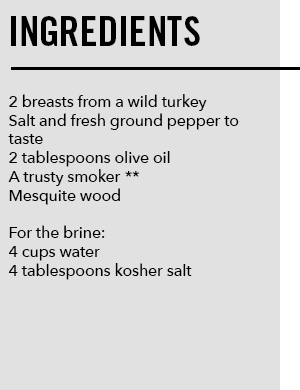 ** Note: Don’t have a smoker? Try these alternatives.

Whisk 4 tablespoons of kosher salt into 4 cups of cold water to combine. Drop in your wild turkey breasts and let them brine for 4 to 6 hours in the refrigerator. Once they’re almost ready, light a fire in your smoker (or grill, or oven rig…) and get the temperature hovering at 250 degrees.

Pat the turkey breasts dry and then rub them with olive oil and a generous sprinkle of salt and pepper — don’t skimp! When your smoker is ready, toss them on, sit back and wait. Wild turkey breasts are much smaller than farmed ones, so ballpark the cook time by calculating 30 minutes per pound and use a probe thermometer to confirm the cooking progress. When the temp hits just over 160, pull the breasts, rest, carve and eat.