Did the Slipknot Frontman Really ‘Blow Out’ His Testicle From Singing?

A urologist weighs in on the most important news in music. Uh, what does it mean to blow out your balls, anyway?

Last week, in a tweet, Slipknot frontman Corey Taylor dropped this extremely metal visual on our psyches: that he “blew out” one of his balls from shrieking really high.

Shortly after, metal blogs and music sites picked up the tweet, stating that Taylor may have actually ruptured his left testicle while trying to sing the high notes of Dokken’s 1987 song “Kiss of Death.”

But wait! Taylor’s reaction to the news coverage suggests that he was using “blew out the left testicle” as a figure of speech of sorts — and his testicle remains intact. (Taylor didn’t return my request for comment about his balls.) 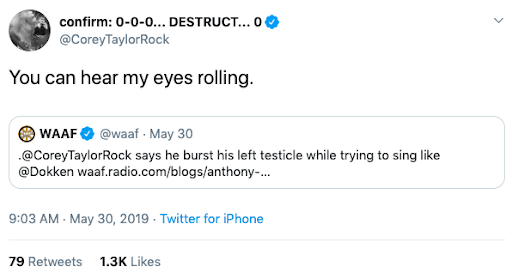 While I’m glad to hear Taylor’s genitalia is still in fighting shape, I can’t help but wonder: Is it actually possible to rupture your testicles from singing, like an opera singer breaking a glass with their voice? And what kind of strain does it take to rupture the boys?

I reached out to a urologist, Orlando-based Jamin Brahmbhatt, for answers. “In my 12-year experience in urology, I have never seen a testicle that ‘blew out’ from singing,” he says. However, “there are things that can happen when you have excess strain on your groin: hernias, varicoceles [enlarged scrotal veins], sore muscles, etc.”

But what about, well, blowing them out? Was it just an expression, or can you actually blow out a testicle? That would mean “the testicle and its contents are traumatized,” Brahmbhatt says. “I see this more when there is trauma to the testicles either from being hit in the ball by another ball (for example, a softball), penetrating objects (gunshots, knives) or anything that can hit the scrotum with high velocity.”

Obviously, this kind of damage would result in a lot more than just some minor discomfort. “This level of injury is rare, but when it does happen, it’s a surgical emergency where we would take the patient for an attempt at repair of the testicle,” Brahmbhatt says. Worst-case scenario, the testicle may actually need to be removed. Symptoms of this kind of damage include “major scrotal swelling, changes in skin color (purple/red) and pain.”

Purple/red? If this is what happened to Corey Taylor, I guess you could say it was more of a testicle “Duality.” I’m so sorry.