Welcome to the Glorious Age of the Shrigma Male

Alphas, betas and even sigmas must bow to the mighty mushroom

“Are men okay?” has long been a purely rhetorical question — we all realize the answer is “no.” But what if, from a notorious online cesspit of male toxicity, a beacon of hope emerged? Unlikely, to be sure, but the internet has always been more surprising than predictable. And when you find out that fungus is involved… well, it’s fair to say that all bets are off.

Don’t be alarmed. The Shrigma Male may appear strange at first, though he means you no harm. Indeed, the mushroom-person hybrid is unassuming, almost benign, a rarity in our extremist and aggressive web culture. The character is the work of an anonymous poster on 4chan, who shared their original “Wojak” — that is, a new mutation of a well-known, highly customizable MS Paint meme — on the /b/ board in January, to extremely hostile replies. (The first comment was “kys,” an abbreviation for “kill yourself.”) After the initial wave of criticism, however, a fellow anon declared their intent to spread the reviled image on Reddit. 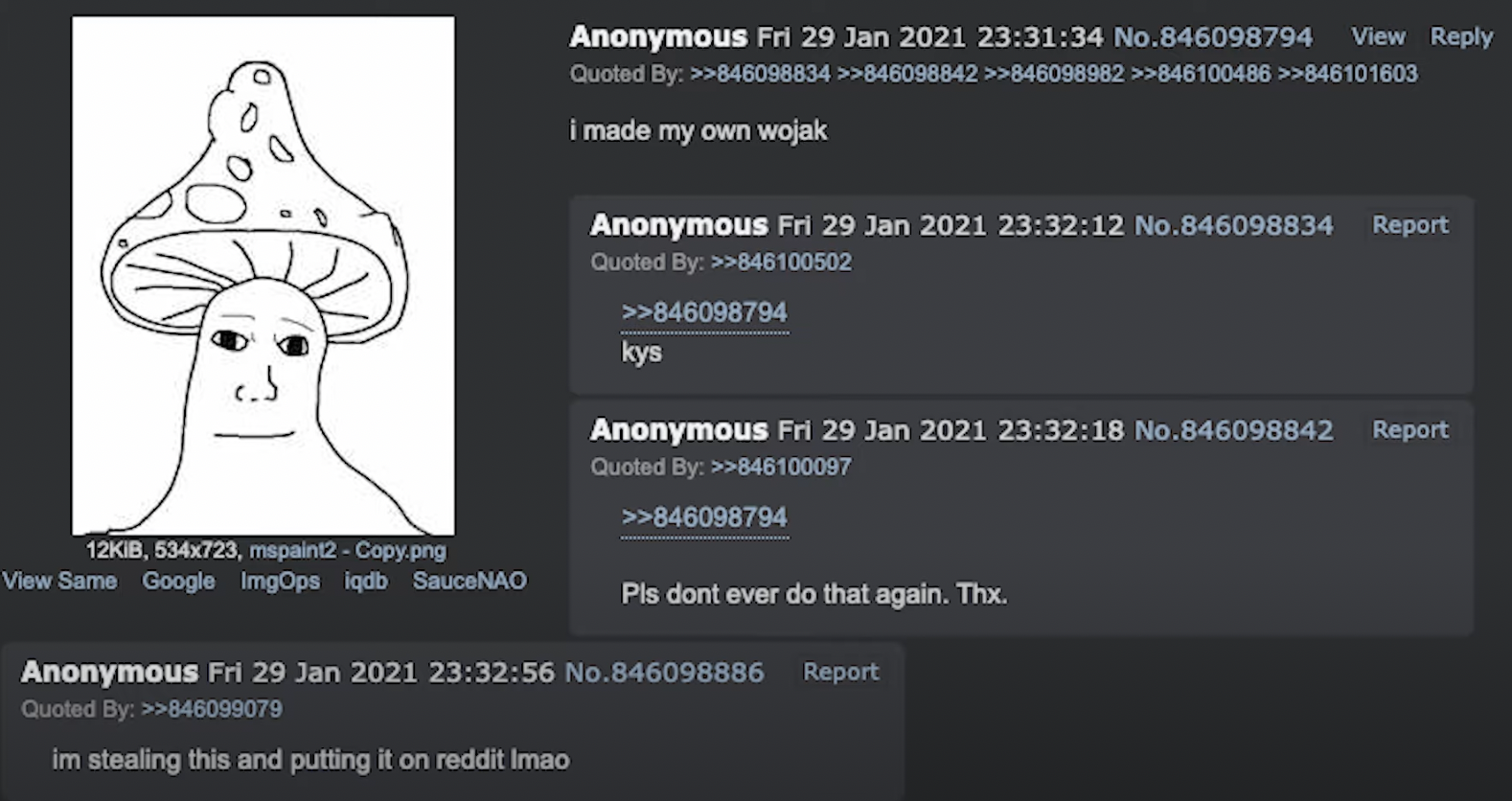 Despite the current saturation of Wojak content across digital platforms, or maybe because of it, the appetite for new spinoffs is immense. Six months after the 4chan thread, “Mushroom Wojak” or “Shroomjak” captured the attention of meme communities on Reddit, Twitter and Instagram. By July, people were referring to the illustration of the fungal fellow as a “Shrigma Male,” in an inspired portmanteau of “shroom” and “sigma.”

At this point, the meme had jumped from being an oddity for its own sake to a pointed satire. The so-called “sigma male” is a baseless archetype of masculinity cooked up by Red Pill and MGTOW (Men Going Their Own Way) communities, often defined as a confident lone wolf, operating outside the sexual dominance hierarchy that the manosphere uses to assign individuals the status of alpha, beta, etc. The conceptualization of the sigma male is a way of reframing your alienation or perceived rejection from society — along with your lack of career and relationship success — as positive.

This, as they say online, is self-deluded “cope,” i.e., a transparent coping mechanism. The “Shrigma Male” heightens the absurdity of the theory to make the claim that actually, anthropomorphic mushrooms are the most elite type of guy, and therefore have their pick of romantic partners. It’s really no more ridiculous than insisting you’re an ultra-rare sigma male, a dude who is “too independent” to have close friends and can only identify with John Wick.

But is the Shrigma truly a male? Mushrooms don’t have gender — at least as we apply the term to humans — and a single species can exhibit tens of thousands of sexes. Perhaps the Shrigma’s uber-Chad power level derives in part from transcending our pathetic mammalian limits. The fungus kingdom, evolutionarily distinct from both animals and plants, encompasses an incredible biodiversity of organisms that thrive in many habitats and dazzle us with their mysteries. Some are delicious, some are poisonous and some are hallucinogenic. They may be able to survive in outer space. One, a gigantic honey fungus in Oregon’s Blue Mountains, is the largest living thing on Earth, about two miles across. And about 90 percent have yet to be classified.

The Shrigma’s potency, too, is unmatched: That mushroom cap is the spore-bearing structure of a fungus that grows above ground to disperse genetic material, so you could say it nuts through the top of its head. How could we possibly hope to compete with such a mighty specimen? 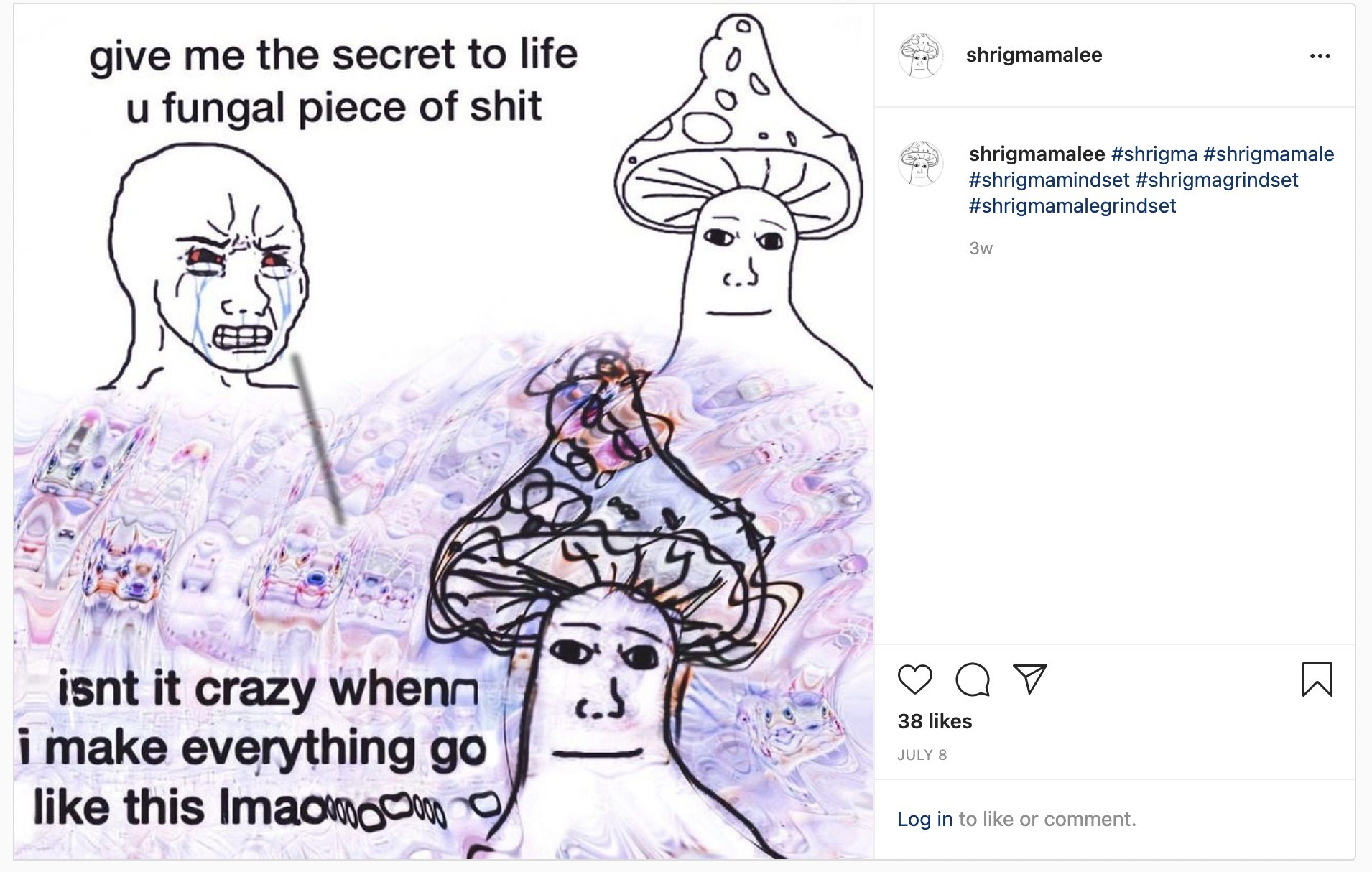 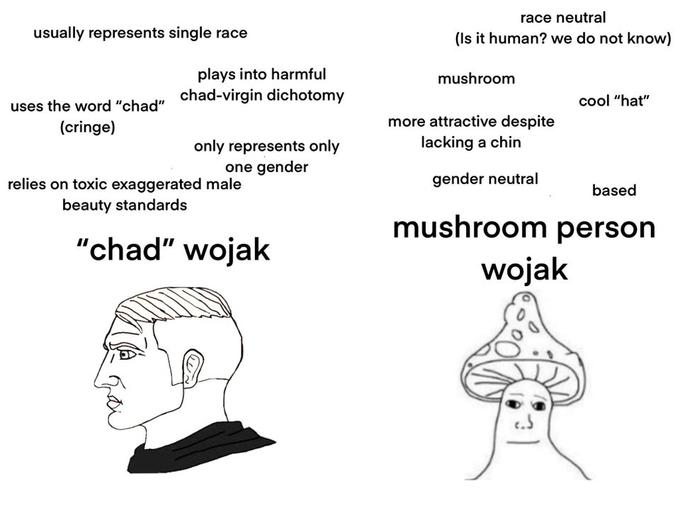 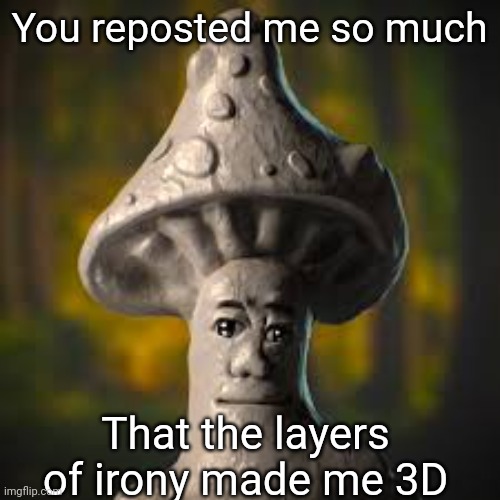 Naturally, that vast power isn’t lacking in dark potential. A legendary Tumblr shitpost from 2018 imagined a confrontation between a gunman and a cryptic, probably omniscient talking mushroom who informs him, “You cannot kill me in a way that matters.” That dialogue returned in a Shrigma meme, as if to drive home our smallness and terror in the face of the unknowable. Alongside the “Shrigma Male” posts ridiculing the bogus sociology of the manosphere, this suggests the final outcome of positing ever more idealized embodiments of superiority: In the end, you give life to something beyond your control, and it no longer obeys our laws. Around the time the Shrigma trend took off, an anonymous critic went so far as to call it a “literal demon.” 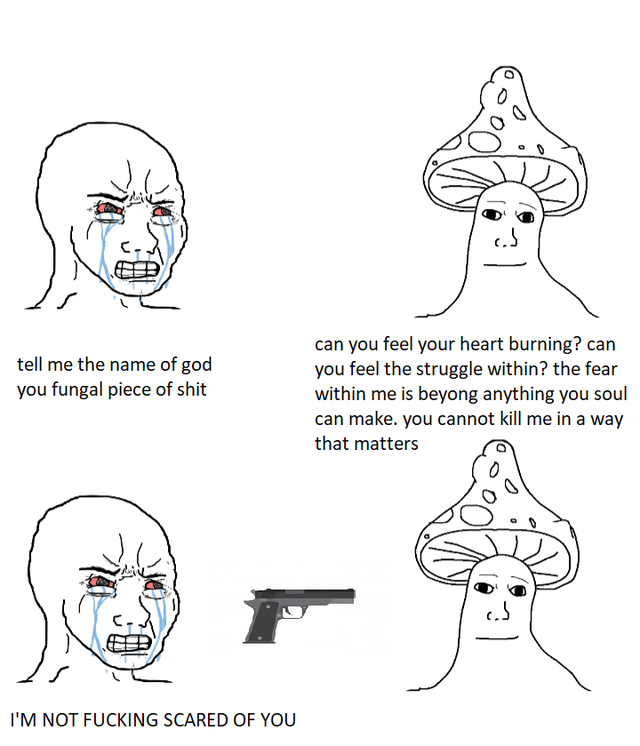 Still, as an alternative to Red Pill jargon around dating and sexual competition, you have to admit the Shrigma Male is a welcome addition to the pantheon. It dissolves our usual categories and is, from I can see, remarkably chill in its demeanor (even when threatened with harm). It’s simply vibing, and therein lies both an appeal and a threat — the latter only when we dare to challenge it. However, should we model ourselves on the Shrigma, we may find a contentment that eludes us as ordinary humans. Reject modernity; embrace the mushroom. This is the way. 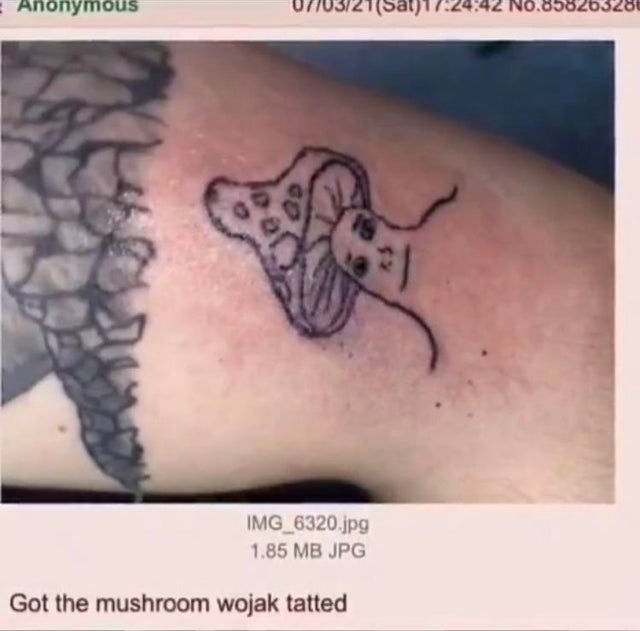