What Can I Do About My Disgusting Runny Nose While I’m Out in Public?

I promise I’m not sick! My body is just stupid!

To add insult to injury, this whole pandemic just had to align with allergy season. Now every time I have to leave quarantine for groceries or whatever other essential tasks that require fulfilling, my nostrils are like a goddamn faucet. I promise I don’t have any other coronavirus symptoms. Stop looking at me like that!

Having a runny nose is obnoxious, but worrying that other people think you’re spreading a highly contagious illness is worse. I’m not even that mad about the allergies — I love to support pollination. But is there anything I can do to avoid looking like a filthy mucus monster?

Allergic rhinitis is the clinical term for allergies pertaining to the nose, and it affects between 10 and 30 percent of the American adult population. It refers to allergies to pollen, dog hair, dust mites, mold spores, what have you — the general irritants that enter through the nose and cause an overflow of mucus, sneezing and itchiness. But the symptoms of allergies aren’t actually a result of these micropollutants themselves. Instead, they’re the result of our bodies trying to get these micropollutants out.

Those of us who have allergies basically just have immune systems that are wrong. Our immune system sees a little puppy fur and thinks it’s gotta send the SWAT team in to defend us. To do so, it releases histamines, a chemical that helps flush our bodies of the intruder.

And how exactly does this “flushing” work?

Through sneezes, runny nose, watery eyes — you know the drill.

Because our bodies are wrong, we can take Benadryl or other medications with antihistamines, which, as the name suggests, stop the histamines from doing their thing. So, next time you have to leave the house, you could preemptively take some Benadryl. The problem, though, is that Benadryl and its close cousins can have some whack side effects — notably, they can make you drowsy enough to impair your ability to drive a car. Too much of them can make you trip balls as well, and not even in a fun way. As someone who is allergic to most of the basic shit — pollen, animals, etc. — I refuse to take Benadryl. I prefer to suffer. 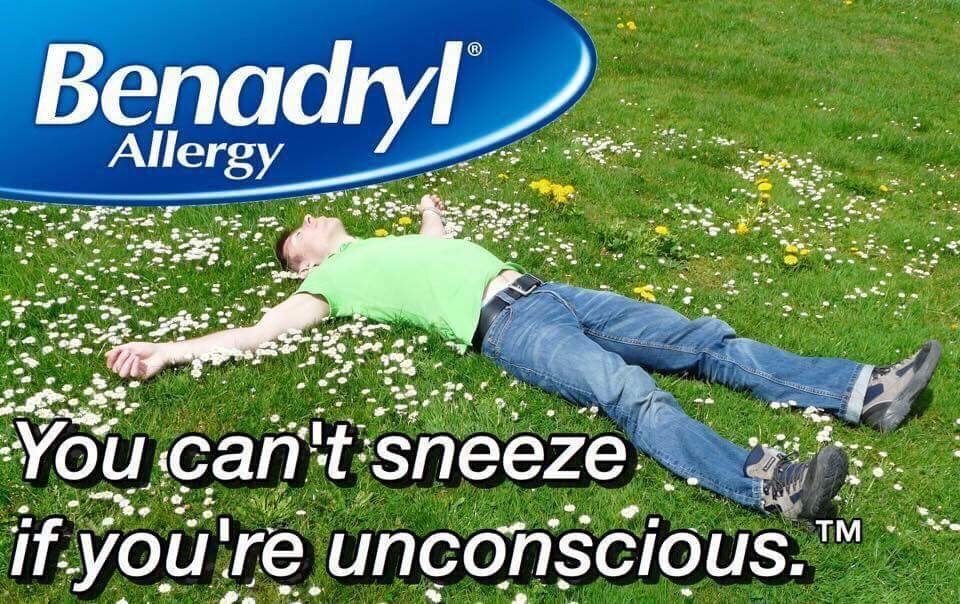 Beyond antihistamines, the common advice for allergies is to “avoid known triggers.” Unfortunately, this time of year, the air is a known trigger.

So what else can we do?

Well, you can shove some liquid up your nose.

Other than that, my best recommendation would be to cover your face or carry some type of bandana while out in public. You definitely shouldn’t reuse the bandana, and it will need to be tossed in the washing machine as soon as you’re home, but at least it looks a little less gross than a crumpled-up tissue you pulled out of your pocket.

Along those lines, this week, L.A. Mayor Eric Garcetti recommended that everyone wear some form of non-medical facial covering when conducting essential errands. While actual surgical masks need to be reserved for medical professionals and first responders, a “tucked-in bandana” will do for the rest of us, according to Garcetti.

As gross as it might be, nobody will be able to see your runny nose from behind whatever cloth covering you choose to cover your nose and mouth with. Be sure, though, to choose a dark color, so no one can tell that it’s drenched in snot.

Stuff You Should Know About the Coronavirus