The Mueller Report is coming.

I suppose that’s been true for nearly two years, ever since former FBI Director Robert Mueller was appointed special counsel in May 2017 to investigate Russia’s interference in the election that gave us President Trump. Over that short eternity, we’ve been left to speculate, based on a slew of indictments and plea deals, exactly where the probe has led and what it has uncovered. But now, at last, we are on the cusp of… uh, not sure?

Yes, it appears that we can’t anticipate the nature or timing of this incipient news cycle any better than we could penetrate the air of secrecy around Mueller’s process. It’s been extremely rare for the special counsel’s office to issue any statement whatsoever. As NPR’s Mary Louise Kelly said of Mueller last month: “He doesn’t talk. His shop almost never says anything on the record.” And almost nothing has conveyed this silence like Mueller’s nonetheless omnipresent face — a poker face. A face of granite.

That’s a cop’s mug, all right. No two ways about it. And in the absence of definitive truths around the sprawling Trumpworld scandals that may or may not lead to impeachment, that mug is like an inscrutable map. Whenever media outlets report on developments in the Mueller inquiry — without direct input from the team itself — they have to run a photo of the man, the boss, the lantern jaw of justice.

That jawline. That grimace. My god. 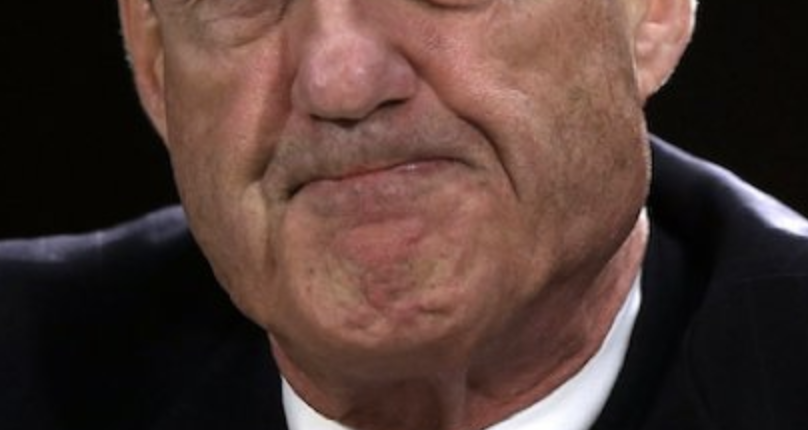 I wonder how news agencies pick from the dozens of file images in which Mueller’s face expresses nothing but his seriousness.

The Mueller countenance is so indelible that you can also find it on his cartoon proxy, “Robert Moral,” the musclebound, shirtless, leggings-clad idol of a children’s book by popular #Resistance grifters. 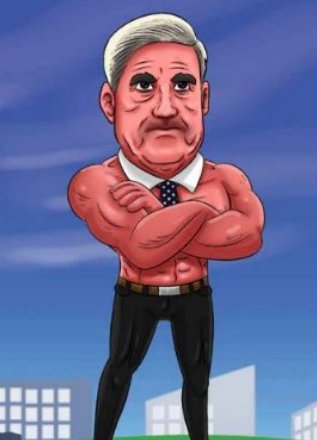 Time after time, Mueller’s placid and sober affect put me in mind of Melania Trump’s most notorious tweet: What is he thinking? Clearly, he’s a master of tuning out the noise, listening for the words that matter. Projecting different possible futures, running through strategy and worst-case scenarios.

Everyone knows that Mueller is methodical; we even know what kinds of things he knows. But his exact position eludes us, lost behind that clinical gaze and skeptical brow.

Of course, Mueller has every reason to stay tight-lipped, with that unchanging look — a disappointed yet unsurprised high school principal. There would be no advantage in divulging information before he absolutely must, and his reserve happens to draw the sharpest divide between him and Trump’s circle, whose unifying characteristic is a profound inability to shut up when that course of action would suit them best. Google pictures of Trump and, aside from the sulky frowning shots, you’ll find only images that capture his open or puckered maw in the midst of a rambling diatribe.

It’s as if by not speaking, Mueller makes room for others to talk themselves into deeper trouble.

Could it be, despite this composure, that Mueller is as gobsmacked as the rest of us by the downward spiral of Western democracy? If so, the performance is all the more remarkable. Here on the eve of a theoretically momentous turn for U.S. politics, he’s yet to betray the smallest hint of what’s in store, heightening the suspense with his immovable visage. We remain utterly in the dark about how much we’ll be able to learn, how far his findings have reached and whether the end of this investigation will be a proper ending to anything. His role in this ridiculous opera, for now and perhaps forever, is compressed into a resolute and undramatic image — the stern gray head that floats over chaos in mute judgment. Any outcome in which we, the people, do not gain access to the meat of the final report would be too cruelly apt, considering this aloof persona.

And so I cling to our single hope of catharsis: the chance that when Mueller stops searching and staring and studying, he finds a voice to goddamn say whatever’s on the tip of his tongue.

It’s a shame, too — he was clearly a cheerful, chatty guy in his youth.