Why Do Rich People Love to Spend a Fortune on Bones?

Fossil collecting is hot fad for the ultra-wealthy, who yearn to be surrounded by death

In a memorable bit from the Netflix sketch comedy series I Think You Should Leave, the bass player for a Johnny Cash-type country singer ruins a studio take with aggressively weird improvised lyrics about skeletons coming to life. Committed to building out the world of this scenario, he winds up describing skeleton economics: “The bones are their dollars,” he sings. “The bones are their money.” It’s pure, unadulterated nonsense.

Or is it? I found it impossible not to think “the bones are their money” when reminded that Russell Crowe once drunkenly agreed to buy a $35,000 dinosaur head from Leonardo DiCaprio. The two men struck this deal, Crowe explained in a recent interview with Howard Stern, because Crowe’s kids were into dinos at the time — and Leo had his eye on a different skull that was coming up for sale. Years later, Crowe resold his specimen through a Sotheby’s auction meant to pay for his divorce, and it fetched $79,300, a figure that did not entirely escape the actor’s attention: “I think it’s almost doubled in value since I sold it,” he told Stern. That’s likely thanks to a surge in fossil-collecting among the ultra-wealthy. Artnet reported earlier in 2019 that the market for remnants of long-extinct monsters is “booming,” much to the dismay of researchers. 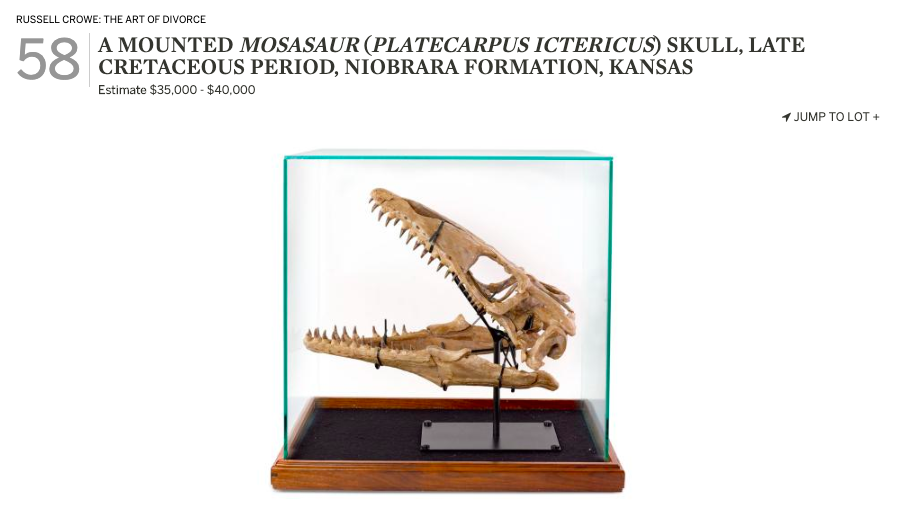 Those same scientists would be the first to point out that fossils aren’t literally bones, but mineral copies of them created over thousands of years. The effect of a fossil display, however, is that of decorating with bones — the final traces of an organism whose brief candle was snuffed out eons ago. And the ruling class is obsessed with this somewhat morbid aesthetic.

Why? It could be that our pop-cultural fascinations (see: the unending Jurassic Park franchise) have driven demand. Or perhaps, as Artnet speculates, the more cultured set appreciates old lizard skeletons as elegant design objects. Yet neither reason quite explains why Nic Cage supposedly has a billiards parlor full of such items. “[Cage’s] poolroom is sort of a prehistoric cave and it’s full of fossils and the skulls of different animals,” recalled actor Sean Bean in telling the story of how Cage, intoxicated, accidentally smashed a prehistoric bear skull, then insisted on burying the pieces. That’s hardly the only strange fossil anecdote involving Cage, who once outbid DiCaprio for a Tyrannosaurus bataar skull at the price of $276,000, only to return it to the government of Mongolia, the country from which it had been smuggled.

Good thing there’s a baby T-rex skull on eBay right now that he can cop for $3 million. 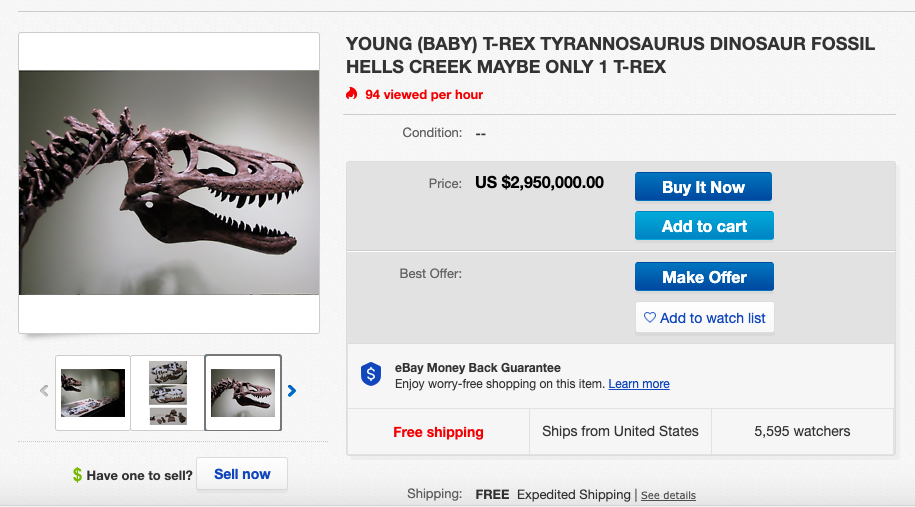 Along with the drunkest leading men in Hollywood, even richer collectors are now pricing museums out of the fossil market. Do you really think Amazon founder and CEO Jeff Bezos stopped with his $40,000 Ice Age cave bear skeleton — one that came complete with a penis bone? Millionaires and billionaires have a proven thirst for immortality, whether metaphorical (legacy, dynasty, getting us to Mars) or literal (medically cheating death, vampirism). Showcasing the creatures cut from the animal kingdom at, say, the end of the Cretaceous period, may be crucial to that flex. It has all the “I’m alive and you’re dead” ridicule of a deer hunter’s mounted trophy buck, and all the scarcity cachet of a Vermeer painting. It conveys every kind of unearned superiority.

The bones are their money. Yes, exactly. This is what DiCaprio can purchase with the expendable income he still has after picking up tabs for the Pussy Posse and whichever 24-year-old woman he’s dating at the moment. It’s a lovely manifestation of late-capitalist hubris to treat the source of our planet-killing, non-renewable fuels as an accent piece for the living room of your fourth home, where the public will never see it. This is ownership for the sake of owning, and spending, and uselessness. On top of that rests the implicit claim that we, as a species, would never be so silly as to let ourselves be wiped out by a drastic shift in the global climate. Stupid-ass dinosaurs! Sit there and listen to us debate the best yacht brands as we swig 50-year-old Scotch.

What are the aristocracy collecting, then, if not the shapes of death? Is this how they fill their garish tombs for the afterlife, with totemic pieces of great beasts who went before? And does the bubble finally pop when someone grounded in reality points out, “Hey, you’re kinda just spending a fortune on bones”? I assume a darker eventuality: that people with too much money will start to buy human ancestors. Your Australopithecus, your Homo erectus. Next thing you know, I’m selling my skeleton to Mark Wahlberg to make rent that month. Oh well. Hope it looks nice in his pool cabana.