What’s in This?: Sriracha Sauce

All eight ingredients in the sauce that goes with everything, explained (yep, even sodium bisulfite)

We’re often told that you should never eat anything (or put anything on your body) if you don’t recognize everything on the ingredients list. But since most of us have no idea what xanthan gum or potassium benzoate are — or more importantly, what they’re doing to our bodies — we’re decoding the ingredients in the many things Americans put in (and on) themselves with the help of an expert.

This edition: Huy Fong Sriracha Sauce, which is made from eight separate ingredients that we’ve broken down in the exact order they appear online.

1) Chili: This is actually red jalapeño, which gives the sauce its relatively mild heat.

2) Sugar: This helps to round out the sauce so it isn’t too bitter. Plus, sugar can act as a mild preservative. One teaspoon of Sriracha contains one gram of sugar, which really isn’t much at all.

3) Salt: For flavor. One teaspoon of this sauce contains 80 milligrams of sodium, which also isn’t too much. That said, if you’re one of those people who puts Sriracha on literally everything, this has the potential to add up over time.

5) Distilled Vinegar: Vinegar produced from the fermentation of distilled alcohol. The extra acidity it provides helps the numerous ingredients in Sriracha mix together, enhancing the flavor and acting as a preservative. Vinegar also adds a bit of an extra tart punch to the sauce.

6) Potassium Sorbate: Potassium sorbate is a widely-used preservative. It has the capacity to damage DNA when exposed to human blood cells, according to a 2010 study published in Toxicology in Vitro; however, long-term studies on the effects of regularly consuming the ingredient are required to provide a more definitive answer on the matter. Plus, it’s hard to imagine that the small amounts in a squirt of Sriracha are really worth worrying about.

7) Sodium Bisulfite: Another preservative, sodium bisulfite is pretty harmless in small amounts — and generally recognized as safe by the Food and Drug Administration. However, while relatively rare, some people can develop a sensitivity to sulfite-based chemicals like sodium bisulfite, which can cause nausea, abdominal cramping, diarrhea, difficulty breathing and swelling, itching and reddening of the skin. So if you know sulfites don’t agree with you, watch out for this ingredient.

8) Xanthan Gum: Xanthan gum is a thickening agent, and it’s relatively harmless. That said, those with bowel issues should be wary when consuming it, as a study published in the British Journal of Nutrition found it to be a highly efficient laxative. But if you have bowel issues, you’re probably steering clear of hot sauces, anyway.

This is a pretty standard hot sauce, and I really don’t have anything bad to say about it. Sure, it contains a few preservatives, but I highly doubt the small amounts in this sauce could cause you any harm. And yeah, the sodium can add up if you put Sriracha on a lot of stuff. But overall, this sauce is pretty harmless — provided you’re not spraying it into both your eyeballs. 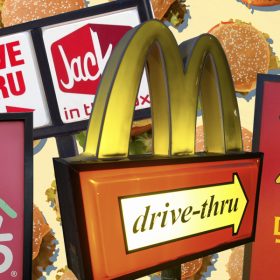 Where Are All the Healthy Drive-Thrus?