Ranking Hot Dogs by How (Un)Healthy They Are

Veggie Dogs? Turkey Dogs? Kosher Dogs? Which is contaminated with the least amount of scrap metal?

Gobbling on hot dogs and washing them down with shitty beer until you flip over the barbecue and set fire to the entire backyard has become an American tradition on Memorial Day. But when you inevitably awaken from your alcohol-induced slumber, eyes glued to the ashen remains of a once-magnificent garden, trees smoldering, police hammering on the front door, neighbors still screaming, you’re bound to find yourself wondering: What the hell was in those hot dogs, anyway?

Since hot dogs come in many forms, all of which are notoriously mysterious in their components, I asked Dana Hunnes, senior dietitian at the Ronald Reagan UCLA Medical Center, to help me rank all kinds of wieners by how healthy they are — from not awful to literally full of metal.

First, though, I want to emphasize that we’re only talking about hot dogs today. We already ranked sausages and other encased meats, so you can check that out if you plan on serving the more high-end stuff this Memorial Day.

Furthermore, before we delve into this ranking, Hunnes insists that basically all hot dogs are deeply unhealthy. “Processed meats, especially red meats, are considered Group 1 carcinogens by the World Health Organization,” she explains. “I simply don’t recommend eating the hot dogs below — they’re filled with sodium, saturated fats, nitrates and nitrites, and of course, most of them are red meat.”

Basically, these are all potentially bad things: Too much sodium has been linked to high blood pressure, as well as increased risk for heart disease and kidney disease. Meanwhile, while saturated fats have traditionally been linked to heart disease, it’s worth noting that science continues to go back and forth in that regard. Finally, studies show that nitrates and nitrites, which act as preservatives, can significantly increase your chances of developing cancer.

In other words, hot dogs, especially those made with red meat, are basically sweaty cancer cylinders.

Bearing that in mind, let’s rank some franks… 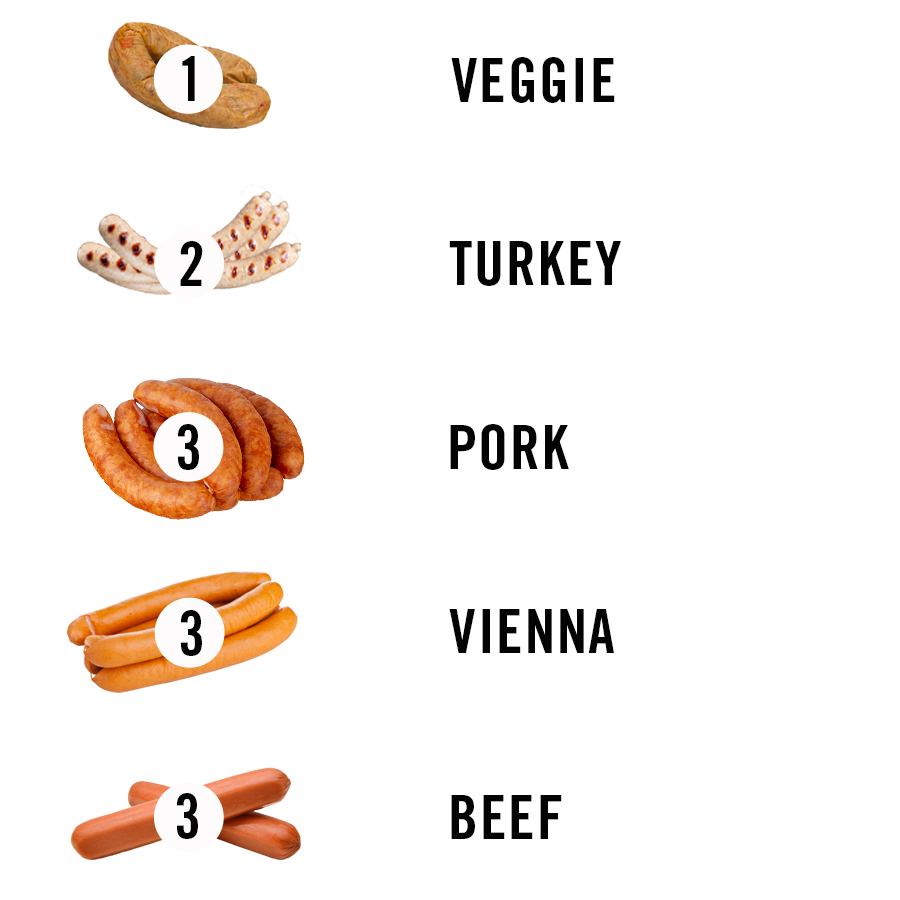 1) Veggie Dogs: Unsurprisingly, Hunnes says veggie dogs are the healthiest option. “These are the only dogs made without meat, although they still tend to be high in sodium,” she explains, reiterating the notion that processed meat is dangerously cancerous. One Morning Star veggie dog, for instance, contains 430 milligrams of sodium, which is a significant amount considering the average person seldom stops at only one frank, and the American Heart Association recommends consuming no more than 2,300 milligrams per day, while in an ideal world, they say that most adults should have no more than 1,500 milligrams. Otherwise, though, these veggie dogs contain little in the way of unhealthy fats, and one weiner contains a marginal 50 calories.

Plus, Hunnes is confident in the flavor that many veggie dogs boast these days. “They do a good job at ‘mimicking’ the real thing, and you might not even notice the difference,” she says.

2) Turkey Dogs: Turkey dogs, especially those without nitrates and nitrites, have the potential to be a somewhat healthy choice. At the very least, they usually boast fewer calories and unhealthy fats than hot dogs made with pork or beef. Plus, turkey is high in protein, as well as several vitamins and minerals that help the body function properly.

That said, while many hot dog companies have made a push toward natural ingredients, claiming to have removed nitrates and nitrites in the process, food scientists warn that the replacement ingredients could be equally damaging. So, as always, be on the lookout for so-called natural products that actually boast a lengthy, unnatural ingredients list.

3) Pork and Beef Dogs, Including Vienna, Kosher, Organic and Butcher-Made: Once we enter into pork and beef territory, no matter how these hot dogs are made, Hunnes says any semblance of healthiness goes out the window. “These are red meat and not healthy whatsoever,” she emphasizes. “They’re slight variations on the same theme, so I could lump them together, even the organic dogs.”

She does mention, however, that Vienna Beef hot dogs, which are basically standard highly processed franks, were recently recalled due to a possible metal contamination, so you should probably avoid those altogether this Memorial Day.

That said, even without scrap metal, the average frankfurter is nauseating. The National Hot Dog and Sausage Council explains that all hot dogs begin with so-called trimmings, which is a purposefully vague term that essentially emcompasses leftovers collected from the slaughterhouse floor. But don’t just take our (and Hunnes’) word for it. According to a since-removed post by the Food and Agriculture Organization of the United Nations, “The raw meat materials used for precooked-cooked products are lower-grade muscle trimmings, fatty tissues, head meat, animal feet, animal skin, blood, liver and other edible slaughter by-products.”

Now, while Hunnes is confident that all these dogs are unhealthy, it could be theorized that those made by a butcher are strictly meat in a casing, which would obviously be healthier than anything with extra additives. But that poses the question: Does that really count as a hot dog, or is that a high-end sausage?

Whatever the case (or casing), hot dogs are pretty shit. Swallowing some wieners on Memorial Day isn’t going to kill you on the spot or anything, but when hot dogs become a regular part of your diet, maybe reconsider your life altogether.