Ranking Grains by How Healthy They Are

Quinoa? Sorghum? Rice? Which grass seed should I eat so I can humblebrag about being my #bestself in 2020?

Grains are both some of the healthiest and unhealthiest foods we consume. On one hand, whole grains — oats, brown rice, quinoa — are loaded with fiber, vitamins and minerals. On the other, refined grains — white rice, white bread, regular white pasta — have been stripped of their nutrients, making them empty calories that cause your blood sugar to spike, your hunger to intensify, and in the long run, your waistline to resemble a hot air balloon.

So if you want to at least pretend to eat healthier in the new year, sticking to whole grains — again, grains that are eaten in their “whole,” unrefined form (no, a bowl of Lucky Charms is not a whole grain, sorry) — is a good start. The high achievers out there, however, might consider going one step further and opt for the best of the best whole grains. To help you make the right choices, I asked Dana Hunnes, senior dietitian at the Ronald Reagan UCLA Medical Center, to rank an assortment of grains by how healthy they are — from supremely healthy to pretty meh.

Another thing I should note before jumping into our ranking is that many grains (and plants in general) contain antinutrients, i.e., compounds that essentially prevent the body from absorbing all of the good stuff in your food. This is normally no problem for people with a varied diet, as they consume enough nutrients to negate the antinutrients. However, people who have a diet that relies almost entirely on grains — this mostly happens out of necessity in developing countries, where grains often make up a massive portion of the food supply, but even vegetarians and vegans can end up relying too heavily on grains if they’re particularly picky — should watch out for nutritional deficiencies. Moreover, cooking your grains correctly, which often means boiling or soaking prior to cooking, is a good way to reduce the amount of antinutrients in them, so make sure to Google a recipe before pouring a bunch of grains into your mouth.

Now, come along, because your health journey begins today (and probably ends in a couple of weeks, when you realize, while drooling over a platter of orange chicken, that resolving to eat healthier was a terrible idea, but YOLO). 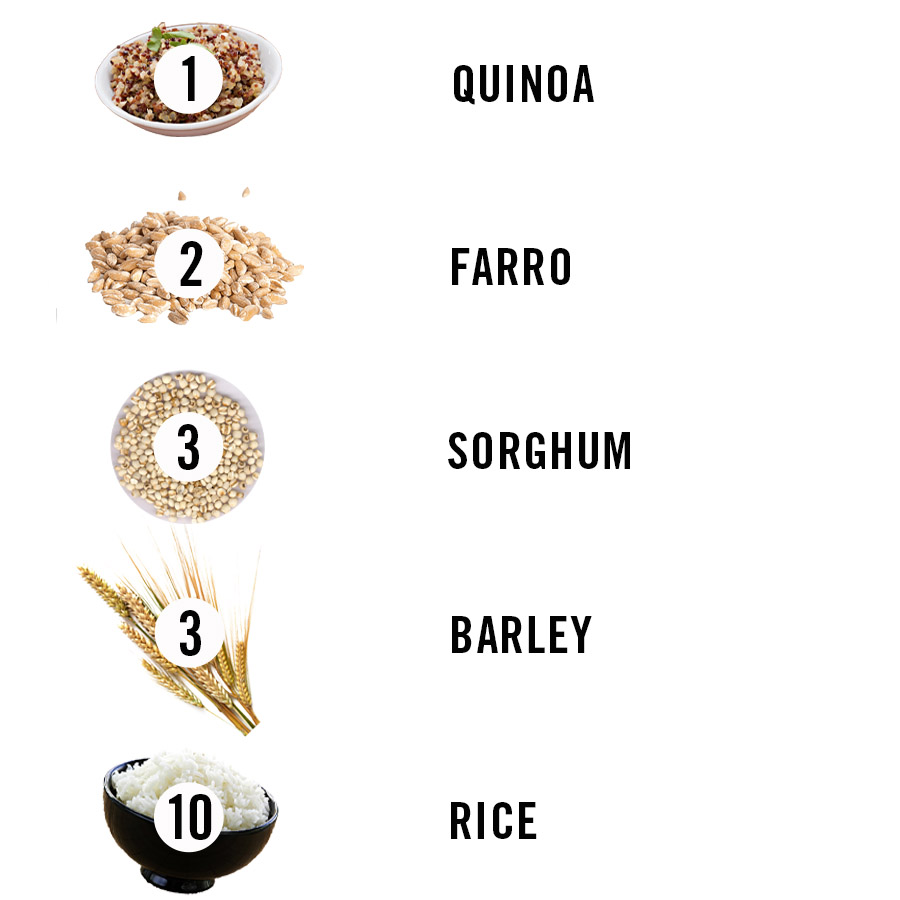 1) Quinoa: According to Hunnes, quinoa, those little pods that your vegetarian friend always forces you to eat, is “very healthy, high in protein and high in fiber.” Moreover, quinoa is one of the few plant foods that contain decent amounts of all nine essential amino acids, which help the body in all sorts of ways. In other words, quinoa meets essentially all of your nutritional needs.

Hunnes does mention, however, that you should take care to rinse quinoa well before chowing down, as it can be packed with saponins, a naturally occurring phytochemical that tastes bitter and can make you itchy.

2) Farro: An ancient grain that’s been around for thousands and thousands of years, Hunnes explains that farro is similar to quinoa in that it boasts a good amount of protein, fiber and nutrients like magnesium, zinc and some B vitamins, which help break down and convert the food you eat into energy. Like many other whole grains, farro also contains a number of antioxidants, which help protect your body from diseases.

3) Sorghum and Barley (tied): Hunnes says that sorghum and barley are similar in that, like most of the grains on this list, they boast high amounts of fiber, protein, important nutrients and antioxidants. Sorghum is notably gluten-free, which is good news for anyone with celiac disease, and can actually be popped like popcorn for a much healthier alternative to the crap they give you at the movie theater.

One thing to watch out for with barley, though, is that it contains high amounts of short-chain carbohydrates called fructans, which are a fermentable type of fiber that can cause gas and bloating in people with IBS or other digestive disorders. Also, no, slamming beers with the boys isn’t a healthy way to include barley in your diet.

5) Millet and Rye (tied): Millet and rye mostly contain the same nutritious stuff as the grains listed above, albeit in slightly lesser amounts. Like sorghum, millet is another gluten-free grain option. Rye, meanwhile, often comes in bread form, and all sorts of studies have found that rye bread is incredibly filling, since it contains loads of satiating soluble fiber. So swapping out white bread for rye bread might keep you from going back for a second sandwich. Hunnes does note, however, that rye has a sour flavor that “only some will like.”

7) Oat: Oats, like oatmeal, “are always good for you,” says Hunnes. Nutritionally, though, she says they sit lower on our list than the grains listed above. Similar to rye, oats contain large amounts of a soluble fiber called beta-glucan, which can increase feelings of fullness and prevent you from going back for a second or third bowl of cereal.

8) Wheat: One of the most commonly consumed grains in the world, despite being low on this list, wheat is still pretty healthy, particularly when eaten in a pure wheat berry form. It contains a decent amount of fiber, nutrients and antioxidants. However, those with celiac disease should avoid wheat altogether.

9) Corn: Strangely enough, technically, corn is a vegetable, fruit and whole grain. While lower in protein than a lot of other grains on this list, corn still contains some vitamins and minerals, fiber and a nice assortment of antioxidants. Plus, due to its low calorie count, air-popped popcorn can be binged without guilt, which honestly, is all I really care about at the end of the day. Still, Hunnes says, “there are other grains that are much better for you on this list.”

10) Rice: Before you freak out because rice is one of the only grains you eat, while Hunnes places rice at the bottom of our list due to its relatively low nutrient content, she does note that certain types of rice, particularly wild rice and darker variations, boast more healthy nutrients than the white rice you usually cook at home. I know you like white rice, but maybe considering expanding your horizons?

In the end, while quinoa is amazingly healthy, as you can see from this ranking, so long as you stick to whole grains, rather than that refined white bread shit, you’re doing a pretty good job. So when you make farro for the first time ever as part of your 2020 resolution, make sure to snap a pic for the Gram before you go back to plain old white rice two hours later.