Ranking Fast Food Value Menus by How Unhealthy They Are

McDonald’s? Taco Bell? Wendy’s? Which provides the healthiest bang for your literal buck?

When life — and my bank balance — beats me down, one of my choice coping mechanisms is balling out on fast-food value menus. Sure, my net worth might be equivalent to that of an actual salamander, but at least I have 10 Jack in the Box tacos and a heart full of shame.

Sadly, though, as I continue to cope with an ever-exasperating world, it seems as though value menus are becoming more and more expensive, and thus, less and less viable for depressed, broke people like myself. In recent years, fast-food aficionados watched, helplessly, as McDonald’s ditched its beloved Dollar Menu in an attempt to encourage customers to explore its pricier options. Of course, McDonald’s being the industry standard, fast-food restaurants across the board have been scrapping many of their value items and expecting customers to pay more in general.

Besides basic inflation, one possible reason for this increase in cost is the dawn of more expensive fast-casual restaurants. “You used to go to fast food places with $5 and expect to get change,” restaurant consultant Aaron Allen told TODAY Food. “But when fast casual came around, like Chipotle and Five Guys, you expected to hand over $10. This changed how much fast food [restaurants] could charge for a burger.” Increased wages for restaurant employees and sustainability efforts could be encouraging these establishments to hike up their prices, too.

Whatever the case, value menus are but a shadow of their past selves, something that will become abundantly clear in just a moment. But since we must work with what we have (and because I sense some necessary coping in my near future, as the one thing I had — my precious value menus — are being slowly taken away), I asked Dana Hunnes, senior dietitian at the Ronald Reagan UCLA Medical Center, to help me rank an assortment of fast-food value menus by how healthy they are, from unhealthy to unhealthier.

Now, since value menus are wildly different across the board, both in terms of pricing and what items they have to offer, Hunnes and I decided that the best way to rank them is essentially by which ones offer the single healthiest item. In other words, we took the healthiest item(s) from each value menu, then built our ranking around those.

Needless to say, before we dive into this ranking, Hunnes strongly believes that none of these menus have anything truly healthy on them. “Sure, they might fill up your stomach for a ‘cheap’ price, but they aren’t good for you,” she emphasizes. “In the long-term, if you were to eat these regularly, they’d be terrible for your health, and you’d pay for it through medical costs and treatments.”

Sounds like maybe I should find another coping mechanism. 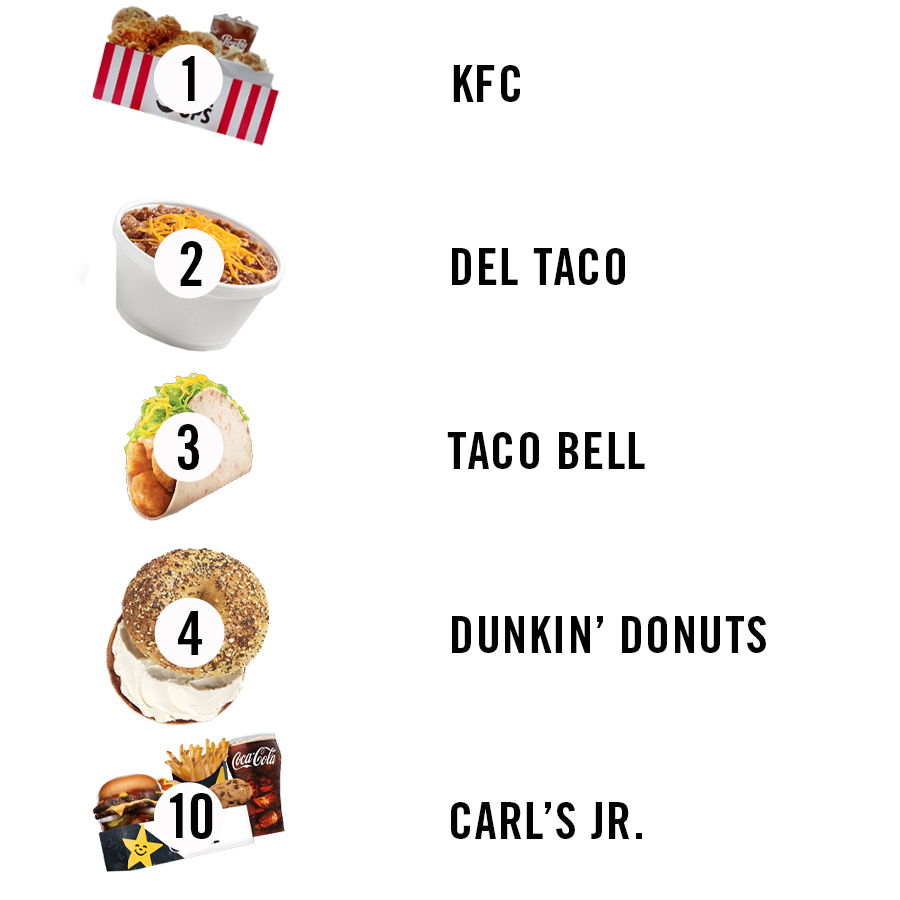 1) KFC $5 Fill Ups: This is a perfect example of how value menus, many of which once featured $1 options, tend to start at a higher baseline price nowadays. Admittedly, these value combos come with some chicken, a side, a biscuit, a cookie and a drink, so you still get a decent amount of food for a low price. Of all these combination boxes, and every other value menu item on our list, Hunnes says the kid’s meal is the healthiest, “Since it gives you a side of vegetables, applesauce and a baked chicken thigh that actually looks like real chicken.” Every other $5 Fill Up contains some variations of fried chicken or a pot pie, which means unhealthy trans fats that could damage your heart.

2) Del Taco Buck & Under Menu: God bless Del Taco for going against the grain and maintaining a value menu that actually allows me to buy 10 tacos for the cost of a tenner and tax. Fortunately, this menu also boast some reasonably healthy options. “The bean cup, especially if you can get it without cheese, would be the healthiest choice,” says Hunnes, adding that it contains a nice dose of fiber and plant-based protein. Similarly, she says the bean, rice and cheese burrito is a fine option.

3) Taco Bell Cravings Value Menu: Like Del Taco, Taco Bell sells a decent assortment of items that you can get for $1 or so, and some not too unhealthy ones at that. “The spicy tostada and soft potato taco would be best, as they both have vegetables and plant-based proteins in them,” Hunnes says. “Those would be my choices.”

4) Dunkin’ Donuts Go2s Value Menu: Now the prices begin to creep back up a little bit. Essentially, the Dunkin’ Donuts value menu features two egg-and-cheese wraps for $2; two bagels with cream cheese for $4; and two bacon, egg and cheese sandwiches for $5. Hunnes does say, however, that the bagels and schmear are an okay choice, although cream cheese can be pretty fattening, and she recommends choosing healthier kinds of bagels, like wheat. She also mentions that the egg and cheese wraps could be somewhat healthy, although she again suggests ditching the cheese. “However,” she adds, “since these are animal products and primarily white flour, I don’t strongly recommend them.” After all, white flour is basically just empty calories.

5) Arby’s Value Menu: Arby’s has a relatively affordable value menu (most things are just over $1) that sports smaller versions — what they call “Jr.” — of some of their normal sandwiches, as well as some sides. Hunnes specifically points to the Jr. Chicken, which is almost identical to the McDonald’s McChicken, and the side of apple slices as the healthiest options here. “At least there’s something to be said for the apples, and the chicken sandwich isn’t so high in calories and salt that it would be terrible for you,” she says, wistfully.

6) Wendy’s Value Menu: Much like Arby’s, Wendy’s delivers a reasonably priced value menu (around the $1 mark for most items) with smaller versions of some of their main items, like burgers, sandwiches and wraps. “The grilled chicken wrap or crispy chicken sandwich are probably the least bad from Wendy’s, though the grilled chicken wrap is probably better,” says Hunnes. “But the wrap is all white flour, so that part isn’t so great.

7) Jack in the Box Jack’s Value Menu: While Jack in the Box has an assortment of items on their value menu, ranging from chicken nuggets to cheeseburgers to small sides, the standout item is and always has been the two tacos for a dollar. Funnily enough, this also the healthiest choice, according to Hunnes. “Again, it will be primarily white flour and meat,” she says. “Not super healthy, but probably the least bad.”

8) McDonald’s Buy-One, Get-One Menu: Rather than sticking with the regular old Dollar Menu, McDonald’s now has a deal where you can essentially buy one of their staple items — a Big Mac, a Filet-O-Fish, a Quarter Pounder with Cheese or a 10-piece Chicken McNuggets — for the regular price, then you get another for $1. “The Filet-O-Fish might be the best choice, but it’s fried white fish on a white-flour bun,” Hunnes explains. While white fish is low in fat, especially compared to the likes of beef and other red meat, it also tends to be low in helpful nutrients, similar to white flour.

9) Burger King Value Menu: The Burger King value menu has some mini versions of their burgers and chicken sandwiches, as well as some sides, most of which are just over $1. “The Spicy Chicken Jr. appears to be the least bad item on the menu,” Hunnes says. Still, though, it’s fried chicken meat — or product, depending on what they use — and white flour.”

10) Carl’s Jr. $5 All Star Meals: Just like KFC, Carl’s Jr. sells $5 value meals, rather than value items, all of which are unhealthy as fuck. “The Carl’s Jr. $5 meals are just literally terrible for you,” Hunnes emphasizes. “They’re meat, white flour, more meat, more white flour, sugar from the drinks and fried potatoes. Nothing good to say here.”

Welp, knowing what I know now, I suppose it’s for the best that value menus are becoming less affordable, and… sorry, one sec —

— you should definitely not eat any of this stuff, ever.