Ranking ‘Fake’ Cheeses by How (Un)Healthy They Are

Few things are more American than processed cheese, that incandescent yellow sludge that nourishes our children and populates Instagram with mouth-watering cheese pulls.

Despite the questionable reputation that comes along with being processed, these products are indeed real cheese… or at least, they start out that way before being cut with other, non-cheese ingredients, like preservatives, enhancers and stabilizers. These ingredients could theoretically serve several purposes, such as making the flavor more consistent, making the texture more meltable or making the appearance more craveable. However, as one Bon Appétit article pointedly suggests, “What it comes down to is that grocers and distributors don’t have to care for processed cheese in the same way that they do for real cheese. It’s cheaper for the producer, the seller and the consumer. It’s about money and time.”

Whatever the case, there are plenty of “almost cheese” cheeses out there, and there are plenty of times when unprocessed cheeses are less than optimal (on a burger, say, or a 2 a.m. grilled cheese). In those situations, which one to choose? To help you make that decision, I asked dietician Abbey Sharp, author of The Mindful Glow Cookbook, to help me rank an assortment of near-cheeses by how healthy they are — from surprisingly okay to “death by golden muck.”

Here’s what she came up with… 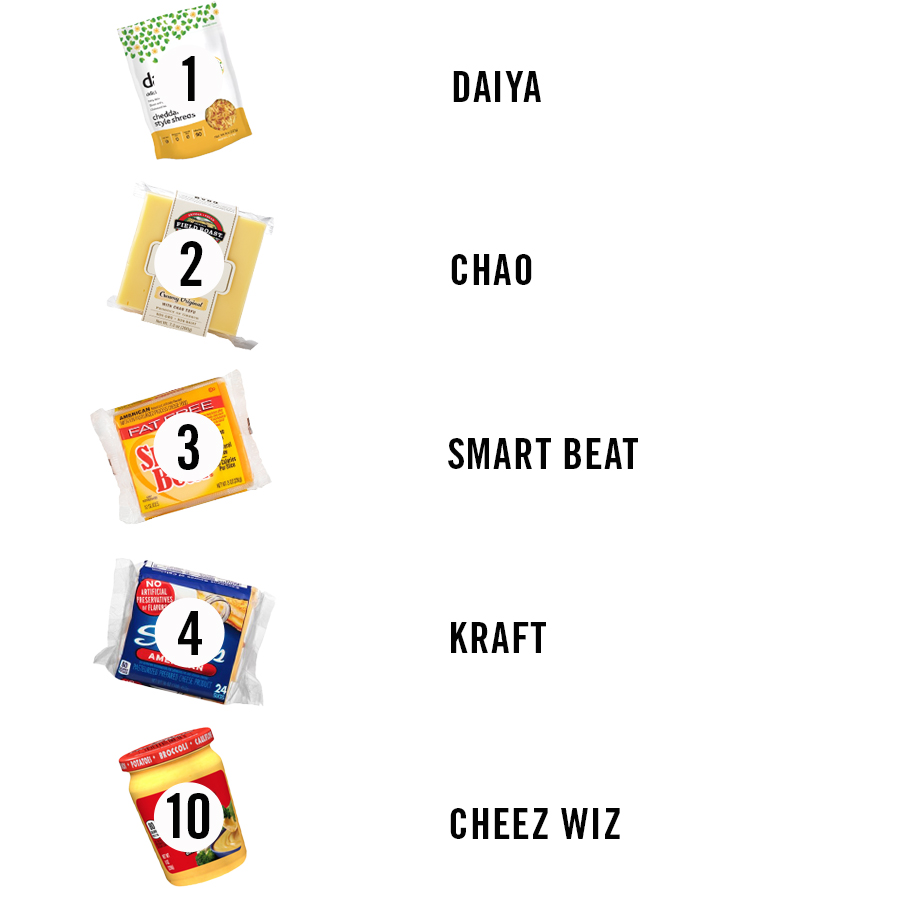 1) Daiya Cheddar Style Shreds: This is a vegan “cheese” product, which is good for our purposes, since dairy cheeses contain casein, an animal protein that has the capacity to promote the growth of tumors (and an ingredient that Dana Hunnes, senior dietitian at the Ronald Reagan UCLA Medical Center, never hesitates to warn me about). Vegan “cheese” also typically has less saturated fat — which has traditionally been linked to heart disease — than regular cheese, so that’s another plus. The simple fact that this is vegan gives it a slight head start in terms of nutrition.

Not surprisingly then, Sharp slots this product atop our list. “My go-to would be Daiya, because it’s a great way to sneak some extra plant-based food into your diet without losing out on the cheese experience,” she explains. “I like that Daiya products are also gluten-and-soy-free, so they can appeal to a wide variety of needs, and these cheese shreds have the same flavor, texture, aroma, stretch and melt-factor as their original counterparts.” In other words, you can totally make some Instagrammable cheese pulls with this stuff.

Full disclosure: None of this is to say that Daiya “cheese” is completely healthy, since it does contain several vegetable oils, which can boast some unhealthy fats, especially when consumed in large amounts.

2) Chao Creamy Original Slices: Another vegan “cheese,” Sharp says these are “not a bad option.” One slice contains a measly 60 calories and 180 milligrams of sodium, but as Sharp points out, “There are a lot of modified starches in the recipe and no fiber or protein,” unlike the Daiya product, which at least boasts a little bit of each. In this case, the sources of the modified starches are corn and potatoes, which have been chemically treated, hence being modified. These aren’t necessarily killer ingredients — they simply add some bulk to this “cheese”; however, they provide virtually no nutritional value.

3) Smart Beat Imitation Pasteurized Process Cheese Food: We begin to see the introduction of dairy with this product, which is notably low in calories and fat — one slice contains only 25 calories and literally no fat. A rather large but follows, though. “Just because it’s low-calorie and fat-free, doesn’t make it healthy,” Sharp emphasizes. “It has lots of processed ingredients, 150 milligrams of salt and two grams of sugar.” One of those processed ingredients, too, is MSG, which is always a little troubling.

4) Kraft Singles: “It was hard to decide which is worse between this and the Smart Beat cheese, but I ranked this one slightly worse only because of the higher amount of sodium and lower amount of protein,” Sharp explains. To be more specific, one Kraft Single contains 200 milligrams of sodium and three grams of protein, whereas one Smart Beat slice contains four grams of protein (and again, 150 milligrams of salt).

5) Tostitos Salsa Con Queso: “This one has 40 calories per serving and 280 milligrams of sodium, plus lots of processed ingredients,” Sharp says. Take note, however, that the serving size is only two tablespoons, or a few dips, which is completely lol-worthy. Also, once again, we see MSG make an appearance, as well as DATEM, an emulsifier that’s been found to cause heart problems in lab animals.

6) El Nacho Grande Cheese Sauce: These are little nacho cheese cups you might find in school cafeterias or janky gas stations. “They may look like the worst, but they have a larger serving size,” Sharp explains. “There are lots of modified starches, refined vegetable oils and additives. They have 90 calories, two grams of sugar, no protein and a whopping 790 milligrams of sodium per serving.” In other words, this is na-cho best choice — and that was quite possibly the most regrettable sentence I’ve ever written.

7) Trenton Farms Nacho Cheese Sauce: Since the nutritional information for 7-Eleven nacho cheese and movie theater nacho cheese is hidden away somewhere in a deep vault, I figured this large tub of nacho cheese might provide some similar insight. “Seventy calories, lots of modified ingredients and 510 milligrams of sodium per serving (two ounces) yields a highly processed choice,” Sharp says. Again, this is a case of lots of bad and virtually zero good.

8) Easy Cheese: We have cheese in a can here, so you already know things are about to get weird. Put simply, Sharp says one serving of this stuff contains “tons of processed and refined ingredients with 90 calories and 430 milligrams sodium.” Much like the El Nacho Grande cheese, this product also boasts two grams of sugar per serving, which is just unnecessary and strange.

10) Cheez Whiz: “This is actually really bad,” Sharp emphasizes. “It may look low-calorie (80 calories per serving), but a serving is just two tablespoons, and that packs 410 milligrams of sodium and three grams of sugar.” So, as I concluded in my previous analysis of the ingredients in Cheez Whiz, “Please promise me that you’ll take it easy on the Whiz, okay?”

Now, just to be clear, while many of these processed cheeses might sound disgusting, when consumed in normal amounts — i.e., not spraying a whole can of Easy Cheese directly into your mouth — the ones toward the top can make a perfectly fine burger topping, or whatever else you might use them for. In fact, when I explored the ingredients in Kraft Singles, I was surprised to find that they weren’t actually so bad.

So go ahead: Enjoy your processed cheese every once in a while. After all, most of us have had it streaming through our veins since childhood.