I ate all the jelly beans in the name of science, and now I regret everything

In a sense, artificial flavors are enigmas. The only people who genuinely understand their components are chemists at flavor companies, and since artificial flavors are considered to be proprietary information by the rules that govern our food, none of these corporations have (or want) to reveal how exactly their flavors are made — a fact borne out when not a single flavor company responded to my interview requests for this article (as expected).

The only things your average eater sincerely knows about artificial flavors are that they tend to be made up of a combination of chemicals created in a laboratory, and the goal in using them is to make food more craveable. So when my editor suggested I attempt to rank a bunch of artificial flavors by how well they replicate the real thing, I knew I was going to have a considerably hard time.

These concerns were confirmed to me by Purdue University sensory researcher Cordelia Running. “This is probably more challenging than you may have intended,” she emphasizes. “I interned for a flavor company during my master’s, and they had probably several dozen versions of each flavor you can imagine, some much closer to the ‘real deal’ than others. On top of that, most people wouldn’t recognize most flavors for what they are without some context.”

Running explains that the goal with artificial flavors is rarely to concoct a taste that clones a real one. Instead, she says, flavor companies could have hundreds of versions of any one artificial flavor, some of which are better for certain recipes, while others might be a whole new flavor that a food company asked them to create. In other words, even an artificial “strawberry” flavor could come in heaps and heaps of different forms, depending on the food product it was intended for.

When the options are endless, as they are with artificial flavors, the goal is simply to make a flavor that people crave, whether that be a natural taste or not. For instance, Running says the artificial cherry flavor in cough drops and Jolly Ranchers is meant to taste unreal — or at the very least, like what we expect of a candied cherry flavor, rather than the real thing. “People would be really surprised if any of those products did actually taste like the actual fruit,” she says, adding that our modern civilization has developed an expansive sense of taste that includes flavors we never could have experienced in the past. “Most of that is a cultural thing that we’ve developed as a society over the years, like what we expect candied strawberry to taste like based on what candy has tasted like over the past however many years.”

Running also suggests I consider that people often perceive tastes differently, explaining that someone might develop an unpleasant association with, say, cherry flavoring, because they were introduced to it in cough syrup while they were sick. Someone else, however, might love the exact same cherry flavoring, because they used to get cherry lollipops from the candy store, their happy place. To that end, what someone believes is a “real, natural” flavor could be skewed — they could have grown up drinking artificially flavored orange juice, so the fresh-squeezed stuff might taste off to them. Not to mention, thanks to genetic modification, many of the flavors we consider to be “natural” today are far from what they were years and years ago.

Koushik Adhikari, a sensory scientist who works with flavors from a human senses perspective, confirms this notion that people experience tastes — and smells, which play a huge part in how we understand flavors — differently. “No two humans have exactly the same receptor profile, which is the main cause for the differences,” he explains.

All of which is to say, accurately ranking artificial flavors by how well they replicate the real thing — and the idea that there even is a “real” thing at all — is basically impossible, not only because there’s such an immense number of artificial flavors, but also because what’s “real” for one person might not be for another.

Running did say I could try out this ranking personally by using jelly beans, since they’re a relatively concentrated source of artificial flavors, but she again emphasizes that the chemists who made the flavors that ended up in them were doubtfully tasked with staying accurate to the real deal. Instead, they were probably tasked with making addictive jelly beans.

For the sake of journalism, though, I snagged a large bag of Jelly Belly beans and convinced my girlfriend, Artemis, to help me out with a taste test (bless her). Here’s our ranking of artificial flavors, from kinda realistic (on a bad day) to artificially otherworldly. 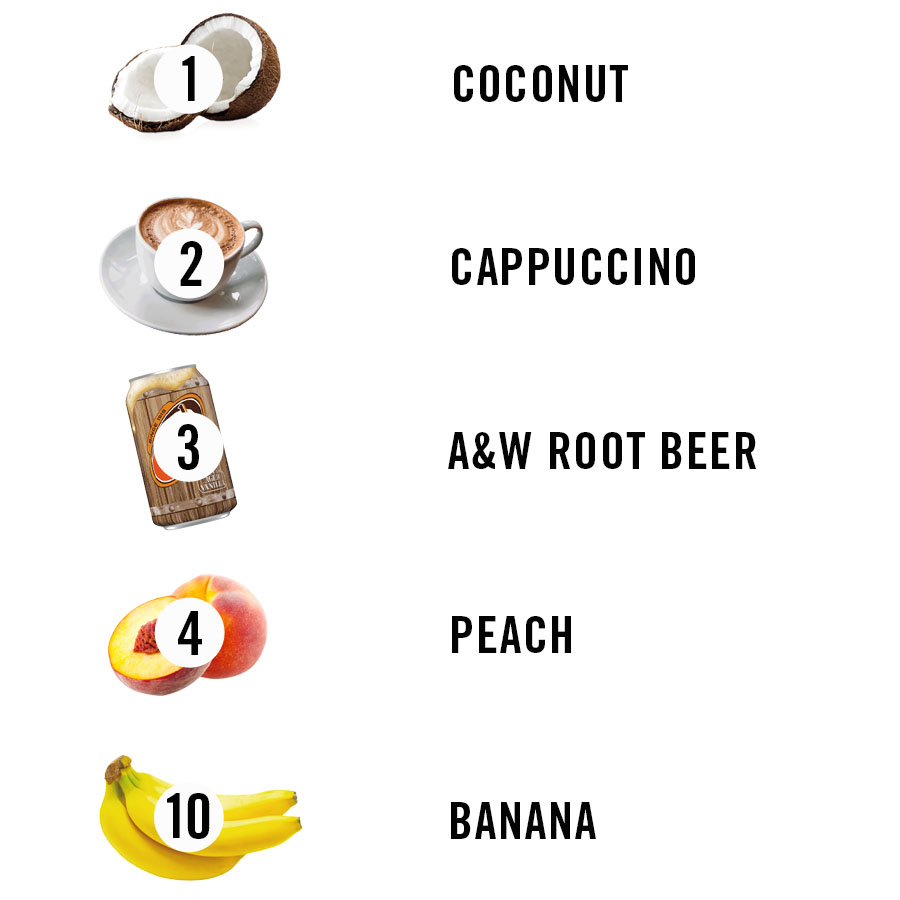 1) Coconut: Of all the jelly beans we ate, the coconut one tastes most like a real coconut, but perhaps more like a piña colada because of all the sugar. Unlike some of the others, it has a subtle flavor, rather than one that feels inordinately artificial. “It doesn’t have the fake soapy taste that a lot of the other jelly beans have,” says Artemis. High praise indeed!

2) Cappuccino: This tastes surprisingly like a cappuccino, but it does taste like one you might get from McDonald’s, where they add a bunch of liquid sweetener to it. “It doesn’t taste artificial,” Artemis says. “It tastes like really sweet coffee.”

3) A&W Root Beer: This tastes a lot like root beer right off the bat, but then it fizzles into what I can only describe as a licorice taste. It almost tastes too strongly of root beer, though, without that sharp bite you usually get from the soda. “It’s definitely root beer, but I’m not sure I like it,” Artemis says. “It did somehow taste fizzy at first, however, which was kinda cool.”

4) Peach: This does indeed taste like peaches, but the sweetness from the sugar quickly overwhelms everything else. “My first impression is that this tastes sour,” Artemis explains. “Wait, this tastes like peaches, but like overly sweet peaches, like Brisk Iced Tea peaches! Now I’m getting a whiff of foot toward the end. It’s like I have a toe in my throat.”

5) Very Cherry: If you’ve ever had some cough syrup, you know exactly what this tastes like — the outside of a candied apple. The problem is, as with many of these flavors, the sugar kicks in with too much sweetness, which gives it that artificial taste. Actual cherries have a nice balance between sweet and sour, but this only provides the sweet. “It’s the kind of cherry you’d expect to taste in Cherry Coke,” Artemis chimes in. “It doesn’t taste like cherries, to the point where I’m not even sure it’s the cherry jelly bean.” (It was indeed the cherry jelly bean.)

6) Blueberry: This tastes like a blueberry muffin much more than a plain blueberry, since it just doesn’t have that tartness.

7) Kiwi: Once again, this tastes only of sweetness at first, then comes the kiwi taste, which almost immediately melds into what I can only describe as a rotten fruit flavor.

8) Watermelon: This is the first one that doesn’t even come close to tasting of what it’s meant to taste like. It’s nauseatingly sweet: It tastes like watermelon in the way a Led Zeppelin cover band sounds like the real thing.

9) Green Apple: This has a combined fake sweet and sour taste, and the sour flavor somehow tastes sweet. “It’s not even sour,” says Artemis. “It was sour for second, and then it was an explosion of artificial sweetener.”

10) Top Banana: I’m not sure why they call this “top” banana, because it’s definitely toward the bottom of our ranking. I’ve never tasted a banana even close to this flavor, but anyone who’s had a banana candy knows the taste: It’s like if you were to put a banana in a jug of water, pour a bunch of sugar in and then take a sip. “It’s just like Laffy Taffy,” Artemis explains. “It tastes like dirt.”

Well, there you have it. Now, remember, the artificial flavors in these jelly beans were just a few of the hordes of flavors available to food manufacturers, which means there could be some out there that taste much more and much less like the real thing. Again, though, flavor is a subjective and constantly evolving thing, so just eat whatever you like and have some vegetables from time to time.

Also, send me good wishes while I go do a rainbow vomit into the toilet.