The Disappearance of Daddy Trump and Hope for a Shadow President

Last Wednesday’s inauguration of Joe Biden as the 46th president was packed with historic firsts and mercifully devoid of unpleasant incidents. (Apart from a maskless Garth Brooks hugging former heads of state, that is.) The peace was maintained by 26,000 National Guard troops deployed to Washington, D.C., to guard against further violence in light of the deadly assault by a Trump-loving mob on the Capitol two weeks prior. Those self-described patriots were in disarray following a slew of arrests and could never have mounted opposition to the hardened security presence around Biden — yet I still expected them to hold marches and demonstrations elsewhere throughout the country. Instead, we saw scenes like this one:

In some respects, the MAGA movement, especially the conspiracist QAnon believers that populate this base and came out in force to riot on January 6th, remained faithful until the last second of Trump’s presidency. Many believed that the very hour of Biden’s swearing-in would magically overturn the election “fraud,” triggering mass arrests and executions of Democrats. But as Sleepy Joe assumed office in a peaceful ceremony, a big crack opened in the dam of denial.

Some loyalists felt sick and betrayed. Ron Watkins, the web admin most responsible for the Q phenomenon, told his pals to move on — and signaled a “new project” ahead. In fact, there had been no update from the Q persona itself since early December, and Trump had been permanently banned from Twitter as of January 8th. He seemed to refuse most forms of communication after that, even those available to the president, and has been totally quiet since Biden took over his job. Apart from feeling like losers, the insurgent base has little leadership.

This far-right contingent has always made great sport of “decoding” material from Trump and Q, but they needed those disjointed primary texts from which to build their fantasy. In the absence of that content, some are too disillusioned to continue — others will try to pick up the pieces and keep the grift going. One available storyline now is that Trump will have a surprise, “real” inauguration on March 4th, the official date of the ceremony until 1933; another contends that he has become a “shadow president,” remaining in power with Biden acting as his proxy.

Both are responses to the trauma of abandonment. There’s no Daddy Trump, Professor Q or General Flynn; no tough, smart, fearless patriarch to guide them back to the comforting lie, so they must reinvent it for themselves. QAnon and much of MAGA life transpires online, through posts and a style of fanfiction. That Trump has left the White House is almost less devastating than the “censorship” of the accounts he used to incite followers. The term “shadow president” speaks to a paranoia of “shadowbans,” tech companies secretly suppressing their reach and engagement. 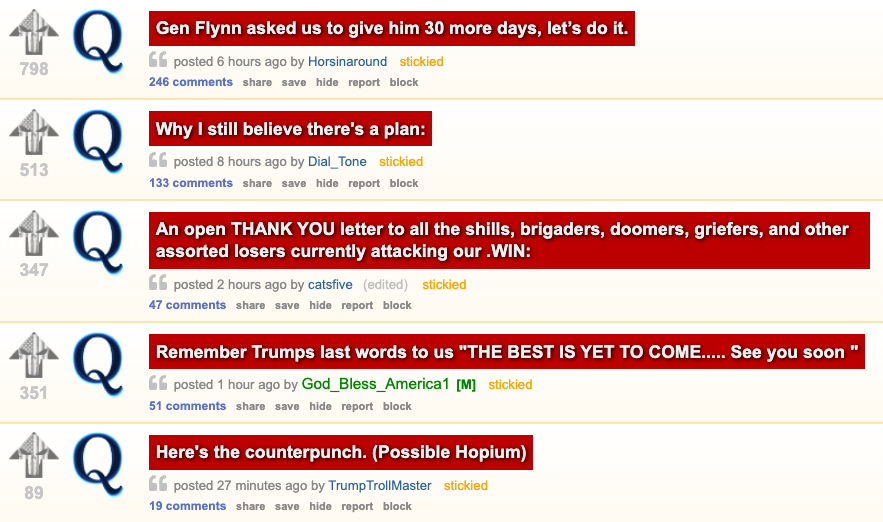 For the moment, the most deluded diehards on Trump’s side are seemingly splintered, bickering among themselves, hurling accusations of deceit or doubt. But they never really hit upon a shared consensus, apart from trust in a secret and mystic war fought against unspeakable evil. That was enough as long as they had messages of authority to interpret, memeify and spread.

Ron Watkins sounds as if he might return to scam them in this fashion again. Trump has no immediate use for this fringe if he’s not campaigning, though he, too, may figure out a novel way of fleecing them in the future. Something tells me, however, that they won’t wait long for either, and may soon coalesce around a different father figure, one they can look to as ruler-in-exile. A passionate and unmoored audience has great appeal to the next con man. Trump’s single term has ended. Posting and clout go on forever.