Zen and the Art of Produce Department Maintenance

When Ben Verdonik started a new job at his local grocery store, he had no idea it was going to change his life. The change was gradual, the 23-year-old explains, but it started when he took primary responsibility over the produce section — or as it’s known in the biz, “the wet rack.”

“I’d been working for about four and a half years, and I always appreciated the produce displays,” Verdonik tells me. “But as soon as I started training for the wet rack, I realized it was about so much more than ‘fruits and vegetables’ — it’s a way of life, a way of thinking and it truly affects the way you look at everything.”

Today, nearly three years into his stint managing the produce section of his store, Verdonik allows nary an upside-down label into his ever-verdant domain. Because in the pursuit of a perfect produce display, “everything matters,” he says. “Besides keeping everything trimmed and crisped, you have to pay attention to what side the stickers are on and that they’re all aligned,” Verdonik explains. “Color has to flow not only within each section, but with the neighboring sections as well — the same goes for organic and traditional, which should be separated, but have the same flow of fruits and vegetables and how they’re organized.”

And even if it seems the majority of customers hardly notice the work that goes into a highly-curated produce section, Verdonik has found a community of people on Reddit who appreciate the craft as much as he does. The subreddit r/produce has just over 7,000 subscribers and only two rules: 1) “Be cool as a cucumber”; and 2) “Attain the perfect wet rack.”

“How many feet is that wet set?” writes another user in response to a luxuriant display. “That looks like you could have fun with it!”

James, a 31-year-old who’s been working in the produce section since 2009, says that while he used to get compliments from customers for his displays just a few years ago, that’s pretty rare these days. Since discovering r/produce, however, the Pennsylvania-native tells me that he’s found a renewed sense of motivation and pride. “The community there is of like-minded people who take pride in their work and want to show it off to others who will appreciate it as well,” he explains.

The produce slingers’ displays aren’t just another entry into the “oddly satisfying” category of viral media either. According to food historian Ken Albala, grocers have taken great pride in a highly organized, visually-appealing produce section for centuries. “Arranging fruits and vegetables has been a perennial obsession for grocers,” Albala tells me. “It gives them, and presumably the customers too, a sense of mastery over nature — the ability to feel one has tamed the wild uncontrollable urges, a feeling that we are separate from and above animals and plants.”

Peruse the annals of art history, and you’ll see how artists have used food to communicate order and disorder as well. “Some artists want to show the haphazard, violent and disordered — hanging dead animals dripping blood, flies, vegetables in random piles,” Albala says. On the other hand, he continues, “The Renaissance and Neoclassical periods prefer tidy orderly markets and cheery fruit vendors — see Vincenzo Campi, for example.” 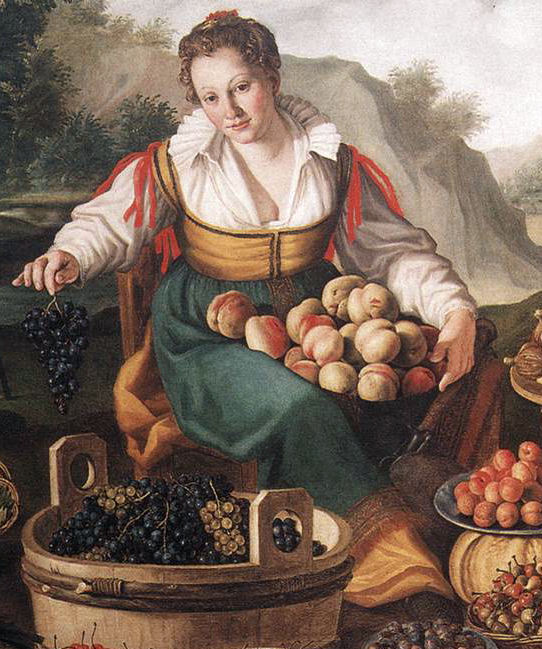 Essentially, in the same way Campi envisioned his “Fruit Seller” in 1580, Verdonik and his fellow purveyors of produce on Reddit are bringing order to an otherwise chaotic contemporary world. “Matter is never destroyed, only transferred,” Verdonik explains. “And if you put in all the energy and love you’re capable of, something truly beautiful comes out, and it truly betters the world — so whenever coworkers or customers compliment me, it makes me happy because I know they felt that energy too.”