This weekend, we met an incredible new Wife Guy. After three-plus months of being “locked up” for quarantine, a little-known sports podcaster named Jason S. Vicknair and his wife were out for dinner in the suburbs of Dallas, one of several states that reopened bars and restaurants to a surge of coronavirus cases. The couple were less concerned with the pandemic, however, than the service at Mi Cocina, the Tex-Mex chain they had chosen for the first night out since March. The problem? NO CHEESE. 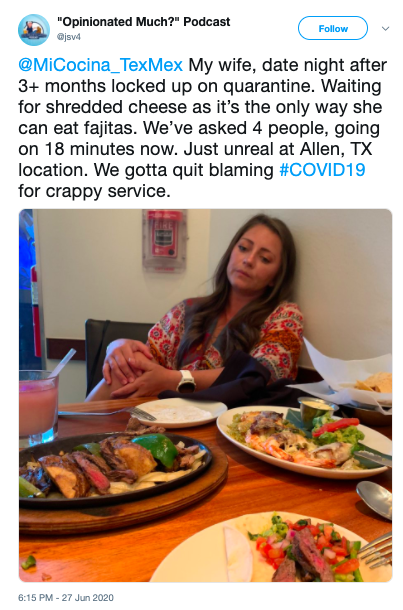 As you might predict, Twitter went wild for this content. Can someone be truly unable to consume fajitas without shredded cheese? Why hadn’t they touched the other food (including some apparently cheesy shrimp)? Was this posted with the wife’s approval or encouragement? Were other people at the restaurant indeed blaming the absence of crucial food toppings on COVID-19?

You can search “cheese wife” now and delve into all the jokey riffs and forensic detail if you like. But what turned out to be most illuminating was the rest of Jason’s account, which is largely devoted to griping at brands. If he’s patronizing a Chipotle or a Panda Express, he’s going to lodge a formal complaint.

It is startling to realize, even if it makes sense: This whole time we had the economy shut down, we were desperate to eat out — not because we like professionally prepared cuisine, but because we missed bitching about it. We are addicted to the entitlement that comes with overpaying for fajitas, the privilege of raising a stink when a waiter working a double shift ignores us for a few minutes. People weren’t envisioning the favorite dishes they’d enjoy when restaurants resumed table service; they were planning the one-star Yelp reviews they’d write afterward. God, we are a sick people.

Yep, that’s really all it is: Americans love the transactional meal where a wage laborer who lives off tips is forced to be glowingly polite and solicitous to them for an hour, and maybe longer. They must feel deprived of respect or status and imagine this is the easiest way to attain either. For sure it has not occurred to a man-child like Jason that the employees he belittles and snitches on had jobs that were grueling even before they were forced to work in conditions ideal for the spread of a potentially fatal virus. That’s not his problem! Cheese, now! Or he will be forced to annoy a social media manager with no control over individual franchise locations!

I don’t know that we can hope for these people to ever gain the perspective needed to understand that their disappointment with a given Denny’s does not fucking matter — or that acting like this only earns you contempt. If the plague gets bad enough, and everything closes down again, at least we will have the satisfaction of knowing Jason and his ilk are stuck inflicting their misery on each other, instead of the outside world.