Every winter for the last nine years, Dave — a 30-year-old in Chicago — has lugged up his 2001 Mongoose mountain bike three stories to his one-bedroom apartment. Biking to work in the harsh Illinois winters is obviously out of the question. Fortunately, back in college, Dave bought a nifty little contraption that helps him stay in shape throughout the cold weather.

It’s a heavy piece of metal, Dave calls it, with a locking mechanism for the bike. This way, the back tire and pedals move while the cycle stays in place. “All I do is clip my back bike tire to the stand and away I go! Except I don’t go anywhere, I just pedal real fast and exercise in that one spot. It gets the job done.” For Dave, that’s enough.

A Peloton is an internet-connected stationary bike with a screen on it. It’s as expensive as it is trendy. Most ads for the thing show it stationed near a fireplace at a mountaintop abode. On it, fit young people sweat it out to a virtual training session.

Sure, the Peloton bikes have video classes and stats showing your distance and speed, Dave points out. His bike has none of that. Instead, he’s perfectly happy propping up his old Mongoose next to an empty fish tank and dusty record player, putting his laptop on his bookcase to watch Netflix and logging 40 minutes pedaling. “I watched a lot of X-Files for a bit,” he adds.

This isn’t Dave, but he says it’s the closest picture he could find to his situation:

So, I wondered, what’s the best way to DIY a Peloton for a 20th of the price? My six-month get-me-through-the-winter gym pass is almost up, and I’m going to need something to do on the rainy days I can’t jog outside. Can I basically build a Peloton myself? And would it be any good?

First, I talked to Jeff George, an industrial designer who made a DIY Peloton himself. It’s pictured here, he says, “behind the dog, but you can’t really see what it is.” 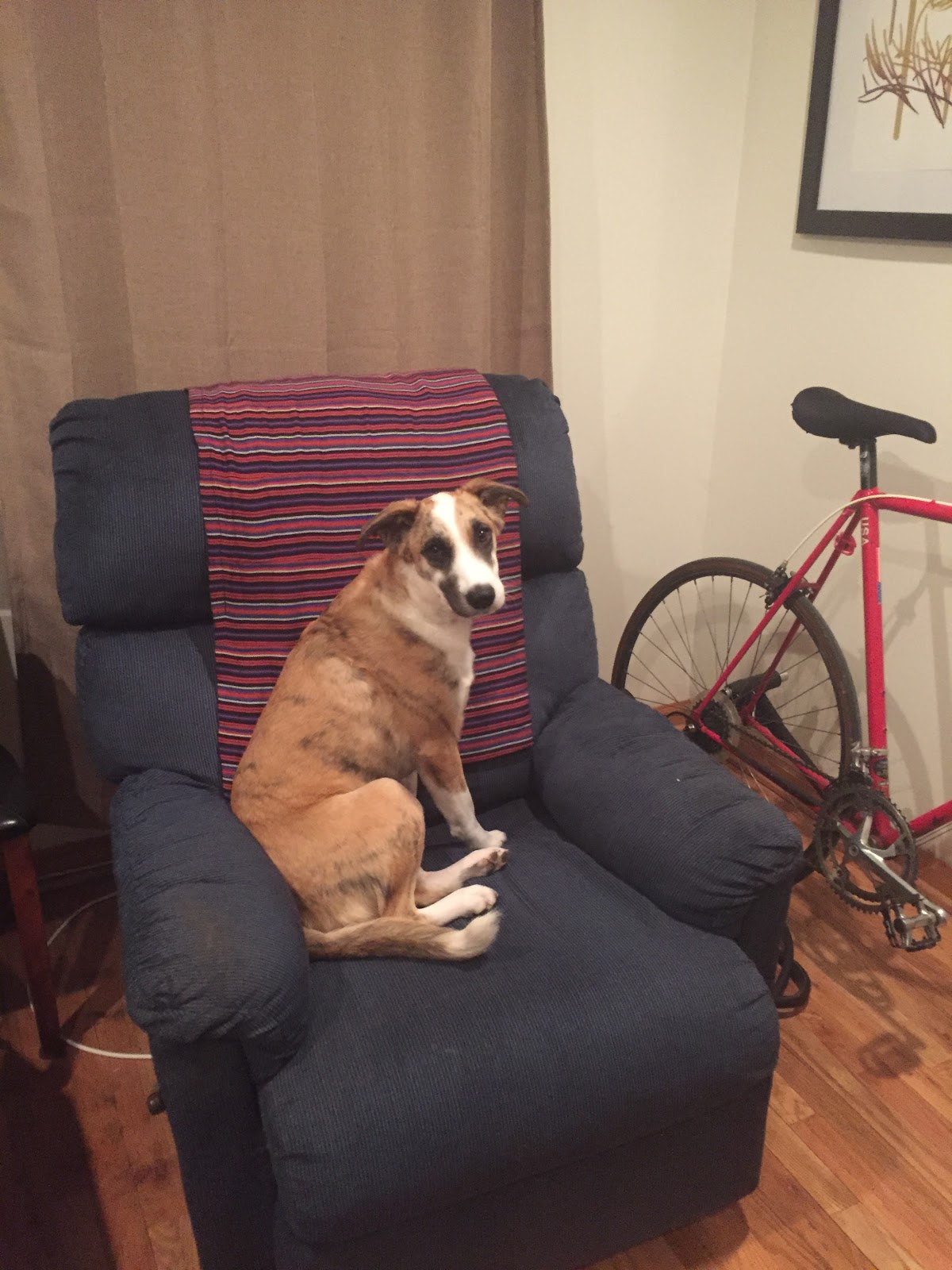 Peloton buys Google Ads on searches for “stationary bike trainer,” but don’t be fooled, George says: You can buy a stationary stand for “like $80.” I found the Sportneer Bike Trainer Stand, which sells for $90 new on Amazon but about $80 used, including tax.

So what if you wanted to DIY your own resistance wheel? This is tough, George says. Basically, you “need a tire to put your tire on.” You’ll need to connect the bottom tire “to resistance, which can be a number of things, [such as] a fan blade inside one of those giant water jugs.”

In other words, George says, “it’s very possible, but super-sketchy” and would require serious woodworking skills and DIY knowhow. Case in point, this video:

The cheap, stationary trainer “lifts the back wheel off the ground and has adjustable resistance,” George says. After buying one of those, he “put the front tire behind a cinder block so that if the back part failed I wouldn’t fly into the wall.” Pretty simple.

George found the cinder block in his back alley, and with the stationary bike and odometer hooked up, the whole rig cost him around $150.

The odometer proved difficult, however, and he’s largely given up on it. “As for fancy stats, I tried to install a odometer/speedometer to the stationary bike, but it was too complicated because most of those devices work with the front tire and only the back tire moves on the stationary bike. So I just ride for time now.”

But what about the fancy screen and training sessions you get on a Peloton? Hell, you can get an iPad Mini for about $100 and stream all the Netflix you want. Or find a YouTube channel for cycling workouts.

George prefers racing games. “I plopped [the bike] in front of my big screen. With the front and back stabilized, you don’t need to hold onto the handlebars, so I would play Xbox,” he tells MEL. “I usually played Rainbow 6 Siege. I would recommend playing some Forza [in] driver view.”

“There is something oddly satisfying about pedaling your hardest while in the driver seat of a Lambo,” he concludes. “And when you cross the finish line in Forza, there are virtual ladies screaming at you, so you get that too.”