Apple’s new releases are so universally reviled, 5-year-old models — cheaper and much more reliable — have become a new standard

Last week, Berkeley radio host Brian Edwards-Tiekert spoke with the author Dave Eggers, who despite living in the tech-saturated Bay Area is conspicuously unplugged: no Wi-Fi, no smartphone, barely active on email, and, so that he can write free of the digital world’s infinite distractions, a basically ancient laptop that can’t get online. People were quick to point out that such asceticism is a matter of privilege — those of us with 9-to-5 jobs are typically shackled to devices in one way or another — but no one argued the enviable luxury of semi-Luddite status.

Thing is, in our own less extreme fashion, many of us are also resisting the cult of endless upgrades, while clinging to old, reliable tools. A prevailing attitude now is that new computers, phones and the like are not appreciably better than the ones we bought several years ago.

I’m currently typing this on a 2013-era MacBook Air that still works great, with no intention of visiting the Apple Store anytime soon — except, perhaps, to replace the battery, if I can swing its cost: $129 or more. Even the gadget-minded folks who want to keep up with incremental improvements aren’t going for the top-of-the-line products anymore. Here’s a Business Insider writer explaining why he bought a refurbished year-old MacBook instead of the latest; a few months later, however, he listed all the stuff his 2012 MacBook did better than a 2016 model. Tech journalists have turned Apple’s ultra-clacky, superthin new keyboard, which is rendered useless after seemingly one speck of dust enters the frame, into a cause célèbre. “Appl Still Hasn’t Fixd Its MacBook Kyboad Problm,” reads one WSJ headline.

If you want added justification for continuing to spend relatively little for Apple laptops that debuted in the middle of the decade, the web has you well covered. Look at this guy boasting about his new 4-year-old MacBook Pro: 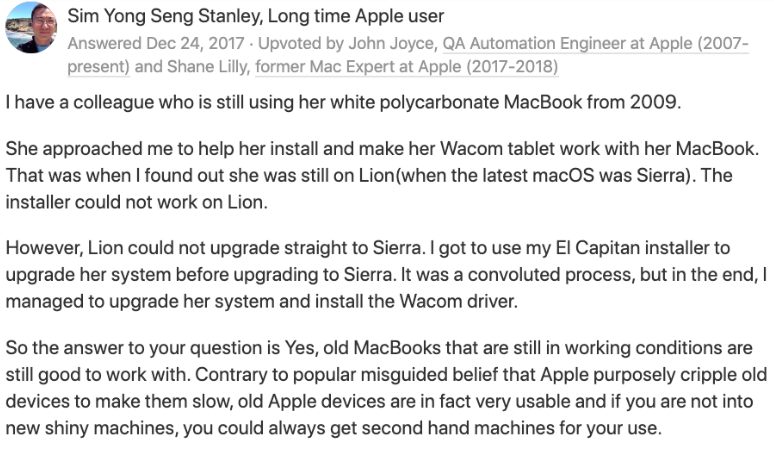 Buying the Newest iPhone Is Pointless

The same pretty much holds true for phones. Truly blessed are they who have hung on to the now prestigious dumbphone, capable of no more than texting, calling and incredibly grainy photos, but a relatively “obsolete” smartphone is a chill accessory, too. Apart from the jacked camera on the iPhone 11, I’m not at all tempted to give up my iPhone 7, which has been a loyal, dependable toilet companion for a good long while. Of course, I’m not the biggest Apple fanboy, and I sure don’t want to spend a few hundred on a shiny toy, but the other week I happened to interact with a tech expert who assured me that sticking by the iPhone 7 is a perfectly sensible move. What’s more, he said, while the iPhone 11 is cutting-edge now, 2020’s models will likely be worth holding out for.

My stubbornness hits a zenith when it comes to AirPods vs. basic earbuds. Why would I shell out $159 for the “fancy” version, which are easier to lose and eventually have to be charged? And that’s to say nothing of the headaches they cause transit authorities because folks keep dropping them on subway tracks. As it is, AirPods are little more than a fake-rich person flex, status symbols to be envied as much as used.

The point is underscored by the emergence of $60 magnetic-locking leather “carrying straps” for the gizmos, to prevent them from going astray. What a concept!

You know, when I continued to carry around a Sony Discman for years because I refused to get an iPod, I told myself it was about loving the album experience, but it was really plain contrarianism. Turning AirPods back into regular headphones, only uglier? You don’t need to come up with a reason to roll your eyes at that. The work is done.

Your Ancient iPod Is a Treasure

All Tech Is Dumb and Bad

And what the hell, while I’m at it: Books are better than Kindles; iPads are for babies and Boomers; 3-D movies always look like garbage; CDs are cool now but vinyl is even better. With the way Spotify scams musicians, maybe we should go back to pirating shit off LimeWire. I think I’d rather have cable back than 4,000 unwatchable Netflix shows (and their annoying Brand Twitter presence).

Yeah, yeah, this is me being a cranky, nostalgic old thirtysomething, but I don’t care — I’m right! I miss Blockbuster, too! Sometimes you have to hold on to what works. Otherwise, it’s already gone.