Say Goodbye to Winter With the Perfect Drink: A Mulled Wine… Cooler?

The end of winter is here — well, almost. Technically, the turning of the seasons arrives on March 20th, but I’ve long considered the beginning of the month to be the start of a new chapter. With all respect to Punxsutawney Phil, do we really need to wait around a few more weeks? I think we all could benefit from getting our heads out of the ass of a pretty awful winter, frankly.

For me, the onset of March means a changing mood when it comes to food and drink. My mind is already straying from rich, warming foods and drinks made with aged liquor and wintry spices — stuff like cognac, pumpkin spice, Scotch and port. Instead, I’m pulled to mai tais, spritzers and green juice.

All right, I guess I should admit that here in Northern California, I’ve been seeing gloriously clear and sunny days for much of the last two weeks. Still, winter isn’t merely a season. It’s a mindset. And with the final February chills fading in the rear-view mirror, it’s time for a drink that offers one last salute to the winter while also embracing the warm weather to come — all in a single sip.

When I think about iconic winter drinks, the first thing that appears in my mind is a warm mug of mulled wine. It was probably one of the first legitimate alcoholic drinks I got to enjoy in front of my family; during holiday gatherings, my aunt would pass me a dainty teacup filled with a couple sips of mulled wine made with shitty Merlot. Sweet and heady, braced by cinnamon and nutmeg, the drink always surprised my young palate.

Nowadays, I still consider mulled wine to be a perfect punch whether you’re drinking alone or sharing at a family gathering. But it turns out those spicy flavors work perfectly in a warm-weather version of mulled wine, served over ice with a hit of seltzer for an effervescent buzz. If you’ve tried any of my other cocktails that involve flavored syrups, whether hibiscus or CBD, the technique is identical: All we’re doing is making a simple syrup, with equal parts boiling water and white sugar, and tossing in spices to steep in the hot liquid. 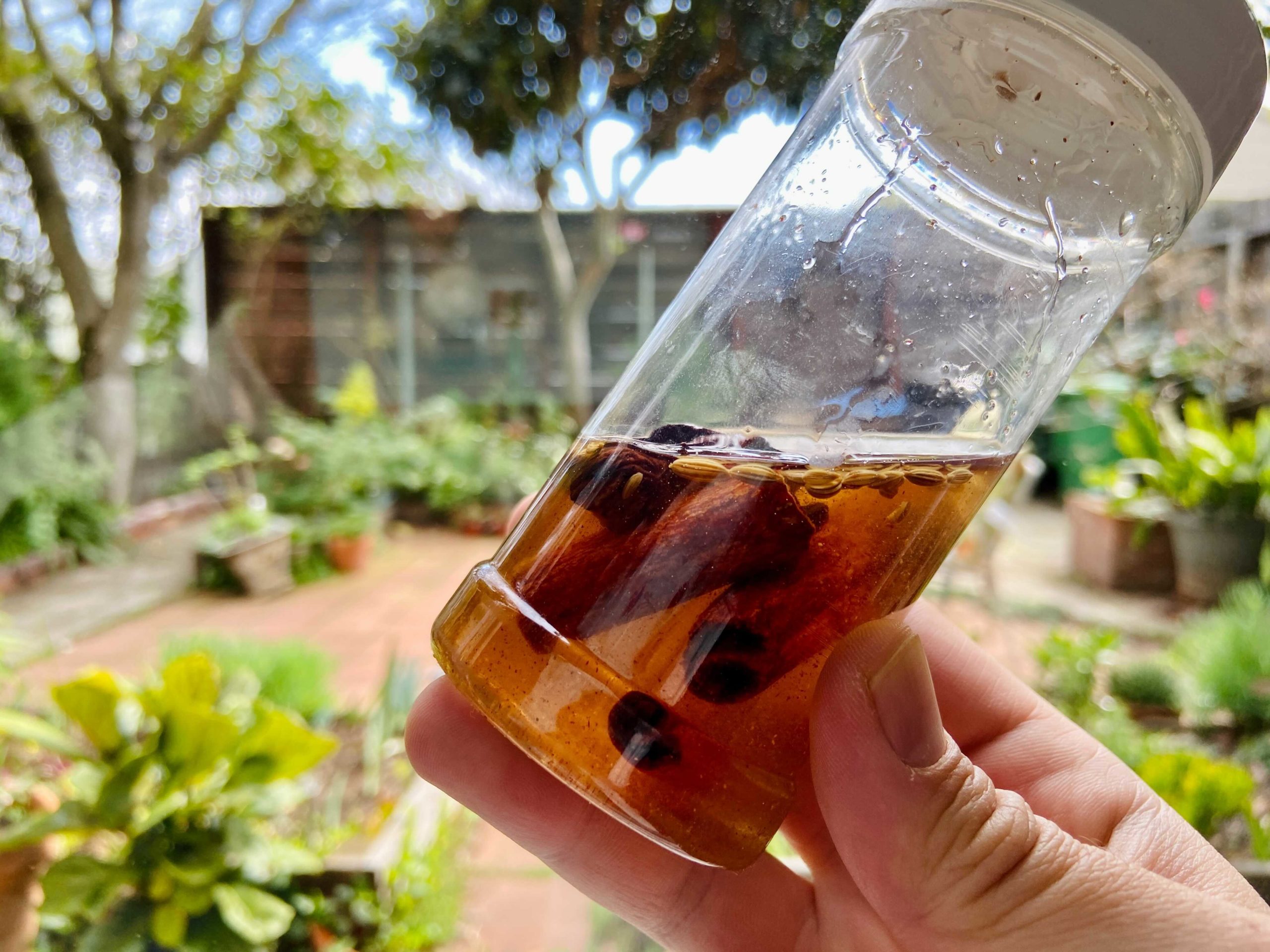 I chose the spices in the recipe based on what I had in my pantry, so feel free to tweak and experiment with flavorings (ginger, cardamom, allspice and citrus peel all work great). The other main ingredient, red wine, is worth some consideration. You need to get something light and fruit-forward, like a pinot noir or a grenache, and avoid wines that are heavy on tannins and smoke (like, say, a big-boy syrah).

Makes enough for four drinks. I recommend doubling it and stashing extra syrup in the fridge. Use it for coffee and tea, too!

Combine everything in a measuring cup or other vessel and let steep for 30 minutes. Once cool, pour everything into a small glass jar and store in the fridge. You can be a real pro and strain out the spices, but frankly, I don’t really think it makes a difference either way after the initial hot infusion. 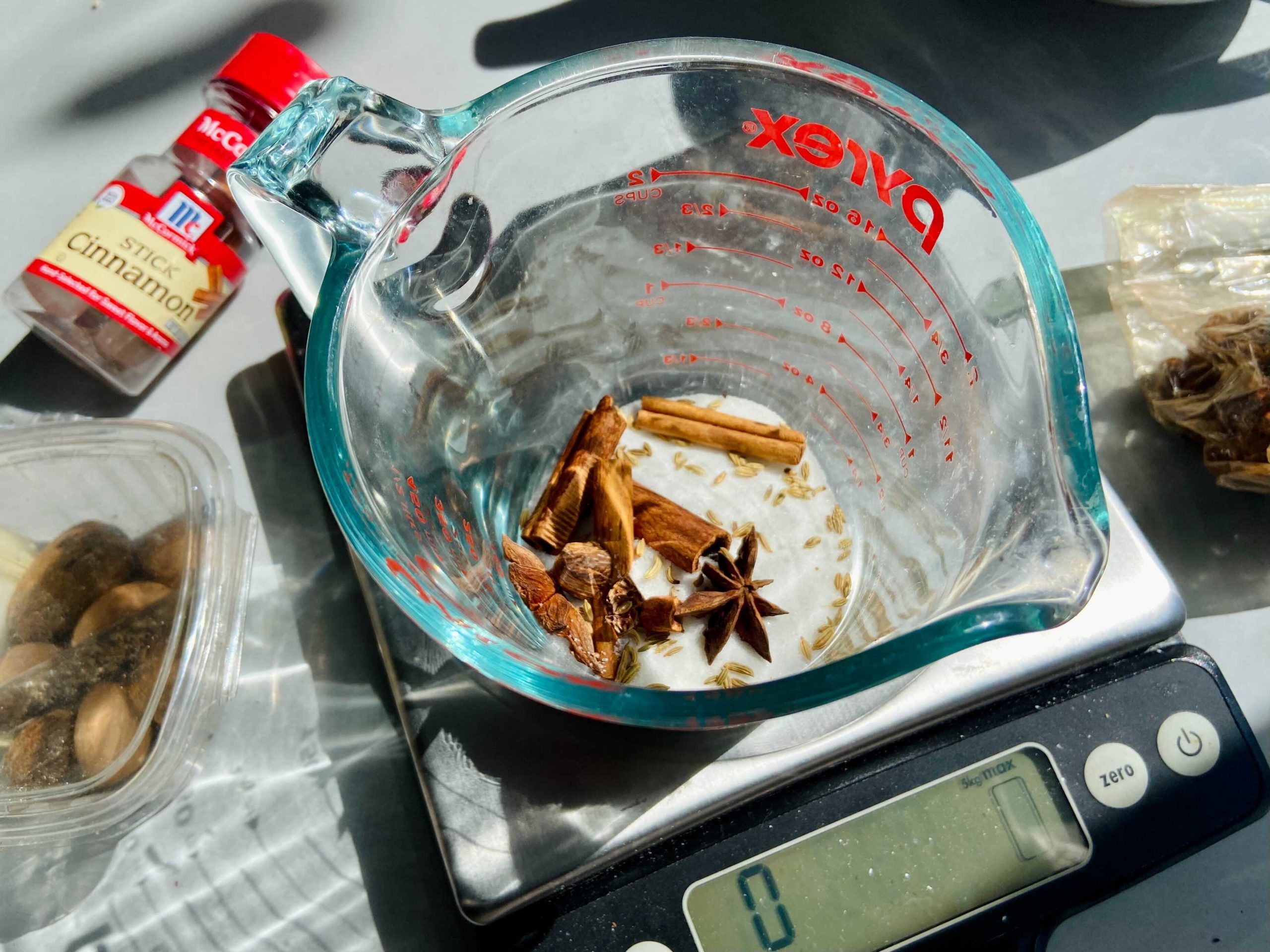 To serve, fill a highball glass with ice and add an ounce and a half of spiced syrup. Fill the glass about two-thirds of the way with red wine, then top the rest with cold seltzer. Garnish with an herb sprig (rosemary or mint works well) or a pretty wheel of citrus. Stir, sip and sigh as you attempt to find solace in a bunch of spring metaphors about rebirth.