Meme deception is a far bigger issue than you'd think, according to a psychologist and relationship expert

Since the beginning of their relationship, Dan S., a senior at the University of Chicago, has lied to his girlfriend almost daily. For his internship, he operates “multiple Twitter feeds all day,” so when she sends him memes, there’s a “70 to 80 percent chance” he’s already seen them. So he fudges the truth and laughs, pretending he’s seeing them for the first time.

Memes are arguably a love language all to themselves. Thanks to Instagram’s easy share tool, many couples and friends in my orbit share memes constantly. They’re a perfect way to express a precise but complex emotion, and for Dan, they let him know his girlfriend is thinking of him. Nice. But this brings up a strange new digital-age dilemma: How do you tell your loved one their meme is old as fuck without discouraging them from reaching out at all?

Meme Deception Will Tear Us Apart

“I’ve sent so many fake hahahahas when I’ve genuinely hahahaha-ed hours earlier,” he says. “When it happens in person, I’m usually way worse about lying. She can tell right away. The smile on her face is just gone and she just continues scrolling through her feed silently.” 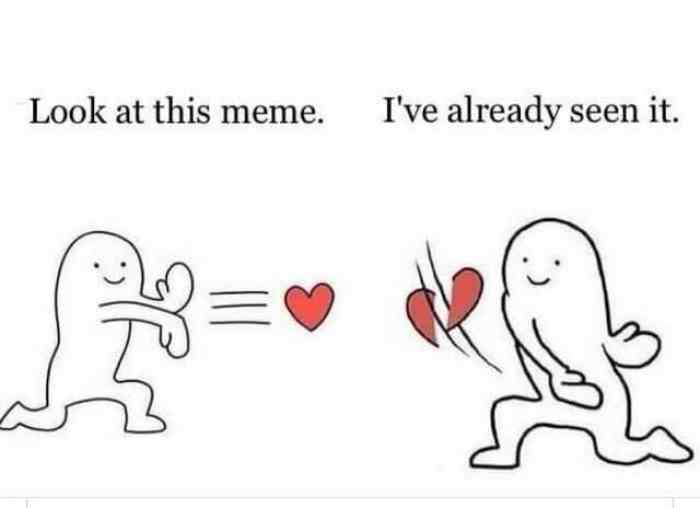 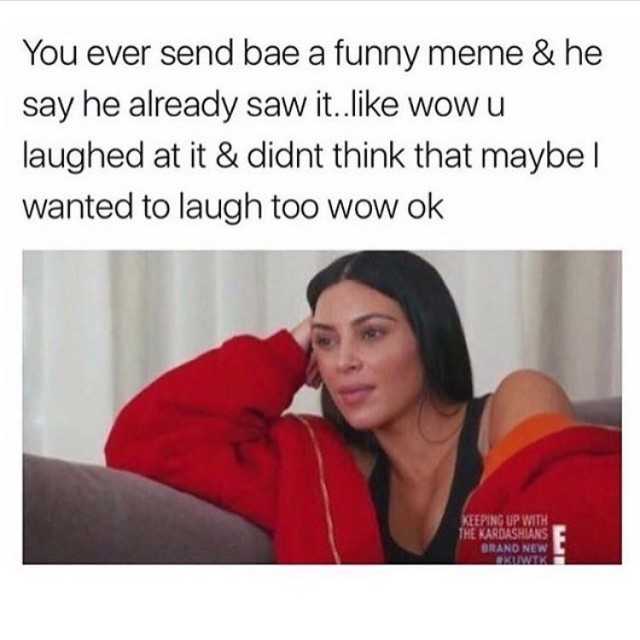 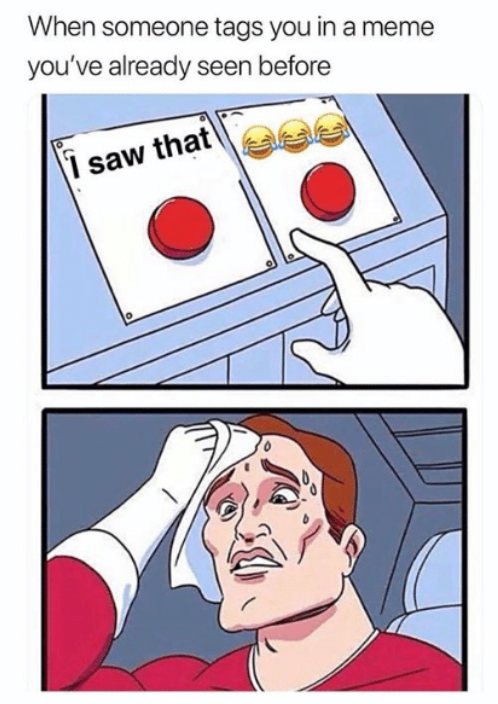 If your brain hasn’t already been broken by the deluge of content in your feeds, the fleeting and seemingly inconsequential nature of memes might make Dan’s situation seem trivial. But Kelly Bos, a psychotherapist and relationship expert, thinks otherwise.

A Meme Between Lovers Isn’t Just a Meme

Bos tells MEL that memes can be much more than just a funny image — they’re a signal from your partner that they want to connect and be recognized. “When a meme isn’t just a meme, the issue might be about feeling ignored or dismissed, and this can be important to discuss, especially if this is true in other aspects of your relationship,” she says.

This aligns with the research of Dr. John Gottman, who studied the social interactions of newlyweds in 1986. In the study, he measured what he deemed “emotional bids” — basically, moments when your partner vies for your attention, be it asking whether you saw a certain news item or telling you about their day — and how each partner in the couple reacted to them. Partners could either “turn toward” their partner and engage in the topic, or “turn away” and dismiss or ignore their partner.

If the act of sharing a meme is actually your partner trying to make a connection, it’s important to engage — but some guys just don’t know how to do it.

Memes From the Heart

Sera, a 22-year-old in Arizona, has a boyfriend who used to just shrug off the memes she shared with him. “I would say a good 90 percent of the time, he has seen something before me,” she says. “Before I told him it bothered me, he would just kind of brush it off, like, ‘Yeah, I saw that,’ and the conversation would end there. … Honestly, it would make me feel like shit [when that happened].”

Sera says she eventually talked to her boyfriend about how this made her feel, and the two are better at sharing memes now. “Now his approach is to have a genuine reaction,” she tells MEL. “If it’s something funny, he laughs, or if it’s something interesting, he tells me that it is, and then tells me he saw it earlier, even if he is recreating the reaction he had when he first saw it.”

“I think sharing memes is the same as telling a joke,” Sera adds. “This is just how it has evolved for our generation with technology. Laughing together helps us bond, sharing ideas together helps us bond. There are days where neither of us is very social, but when we do start talking, sharing dumb stuff we saw on the internet is just a way for us to interact and connect.”

Sera and her boyfriend are a perfect example of what Bos would have her meme-loving clients do in couples therapy.

“You might not feel that addressing a missed meme warrants a big discussion,” Bos tells MEL. “But you could examine best ways to communicate and what not responding means or doesn’t mean. When your partner is sharing memes you have seen, it doesn’t hurt to react — even if it is your fourth go-round on it.”

Where does that leave guys like Dan, whose strategy is to lie about seeing a meme for the first time? Bos advises, “You likely had a thought when you first saw it, so you can react as you did initially.” What if that begins to feel disingenuous for either you or your partner? In this case, “add words like ‘classic’ or ‘I love that one’ or ‘I forgot about that one — so good!’”

Dan says he used to acknowledge having seen a meme, but it didn’t work. “I pretty much never tell [my girlfriend] that I’ve already seen stuff,” he admits. “I used to, but after she got mad I’ve steered clear of that. … When I pretend I haven’t seen it, we both laugh and we’re both happy. Win-win.”

The same goes for Eli, a 32-year-old in Nevada, who says he is constantly lying to his wife about seeing memes. “She’ll show me a meme that I instantly recognize, but I still take her phone, slowly read the meme, then laugh and tell her how great it was,” he says. “I almost always just pretend like I haven’t seen it… but I do it to make her happy. She feels like she discovered something small, and she wants to share it with me. I don’t want to ruin the moment by passively dismissing it. So I take a moment, re-admire the meme and react accordingly. It makes her feel good.”

Like Eli, Dan says he lies about seeing memes to make his girlfriend happy. “I definitely do it to make her happy and let her feel like she’s the one making me laugh at the memes and content she’s sending me,” he says. “I think it makes her feel like she’s making a connection — like an inside-joke type of thing more than anything.”

Dan adds that he’s done it so much, he doesn’t really feel bad about it anymore. “I don’t think there’s any harm in lying about it. (Sure, it irritates her when I’ve seen, like, everything.) It’s so small and meaningless to a relationship that if me lying about seeing a meme is a major issue, I might need to find someone else to share memes with.”

Bos would advise against ending a relationship based on memes, however. She says the better way to react would be to do what Sera’s boyfriend does: Acknowledge having seen it but continue to engage rather than dismissing or fake-laughing. “The bottom line is, your partner was thinking of you, so it is important to recognize this and to be courteous. People communicate differently and through different means, and when you are communicating with someone, no matter what the form, it is nice to hear back.”

Dan says he’s “slowly but surely practicing how to respond to the memes [his girlfriend] shows him in a way that’s not an outright lie,” and one of those ways is to be proactive in sending her the memes he likes first. “I usually try to send her as much stuff that I can, but some stuff slips through the cracks,” he says, adding that “when she sees I sent memes to other people and not her… that’s usually where we run into even more issues.”