The Accidental Poetry of Those Jacking Off Extortion Emails

This blank daze in which we satisfy ourselves — believing the pleasure is blissfully safe — presents an opportunity for con artists who can introduce an element of paranoia. “Sextortion” emails, as they’re called, are spam whose senders claim to have infiltrated your devices or accounts, urging payment in return for not releasing embarrassing material they’ve obtained through the hack. I received one such threat over the past weekend, with my name as the subject line. The gist of this communiqué? The scammer had used my computer’s camera to record me jacking it to my pornography of choice, and now they were blackmailing me with it. Attached to the email was a file meant to look like the compromising video (clicking this, of course, would have actually granted them access to my laptop, and god knows what else).

I didn’t realize all this right away, however, because the writing was so… well… flowery. 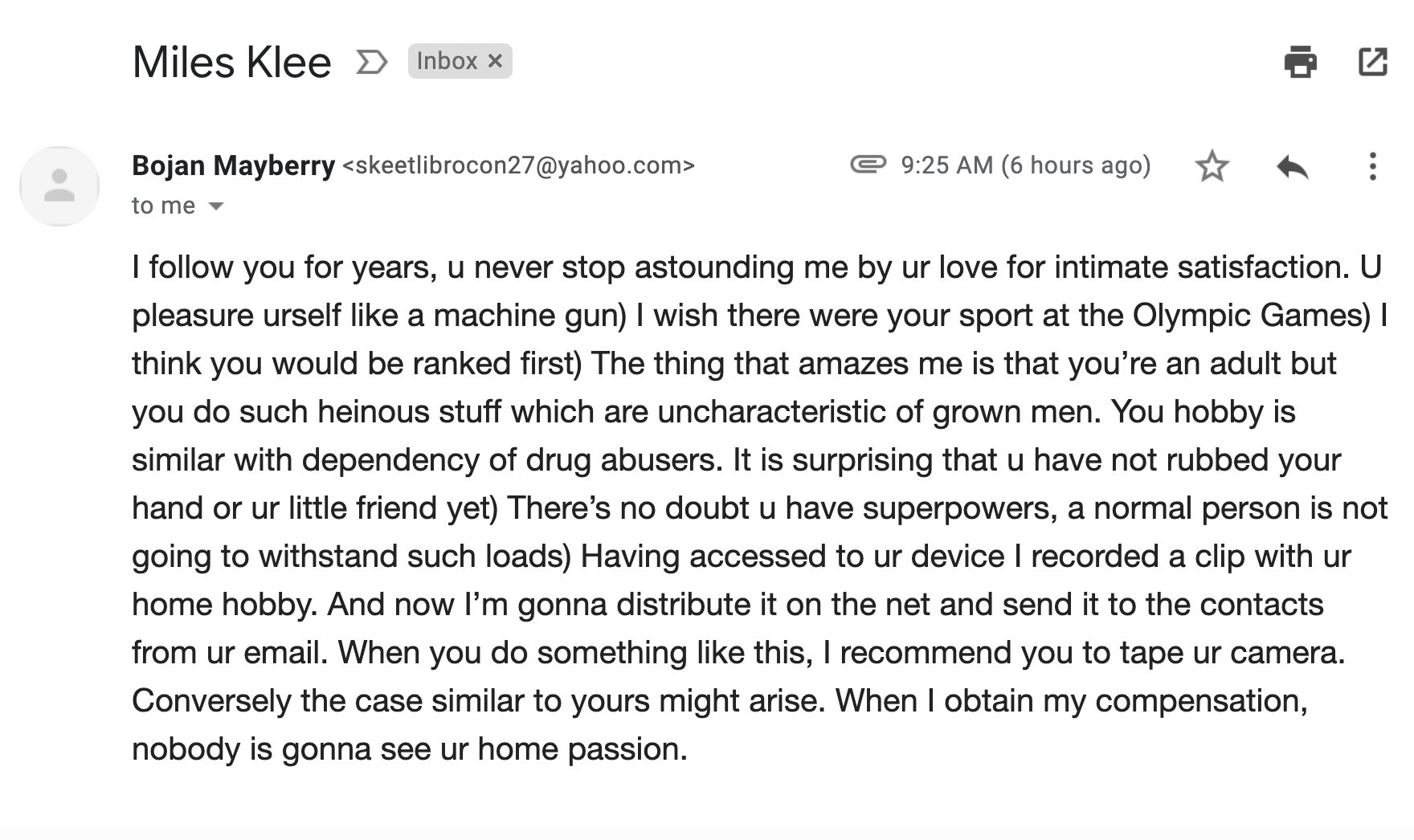 As a professional writer, I know an eloquent paragraph when I see one. Rather than get straight to the point, this missive draws you in. It reeks of Google Translate, yet the innuendo and provocations are undeniably the author’s own superfluous touches. In some places it’s almost complimentary. They consider my stroke sessions worthy of an Olympic gold medal? I pound my dick with the speed of an automatic firearm? I’m some kind of superhero because I fire off huge loads that would kill the average mortal? Wow! There’s so much flattery here that I almost missed the ultimatum, not to mention the bits of shaming that were supposed to make it work. Truly, if I look that impressive beating my meat, then I’m ready to have the footage go public.

In fact, this felt less like a swindle than experimental poetry. And, after sharing the email on Twitter, I learned that it’s not uncommon for these notes to get elaborate in their language.

“I’m afraid to think where did you get such a great penchant for wank off,” reads one sextortion email I’ve found. Another, supposedly from a scammer in the Philippines, explains that “your cam captured you hand partying.” HAND PARTYING. How have we not been saying this? It’s literally perfect. I also love when the writer is worried their euphemism won’t come across and decides to spell it out: “Where you work on yourself (perform sex act to be clear).” That message also threatens to turn the recipient into “the next Jeffrey Toobin.” Topical!

Perhaps the magic of this racket rests in the very fact that makes it effective: Almost everyone masturbates and takes momentary satisfaction from it, never suspecting they have an audience. While the judgments are unequivocal (“You are very perverted!”) the tone can elsewhere become understanding, even sympathetic. Occasionally the phisher advises you not to blame yourself, or remarks that despite their scheme, they take no moral issue with anyone getting their rocks off — you happened to be a convenient mark, that’s all.

The result is a style of correspondence that deviates from the hard-boiled instructions of the classic ransom demand to conjure weird parentheticals and insinuations. Since the supposed hacker doesn’t really have the goods, he must be both vague and exaggeratory. What genre of adult content have I been streaming? He has no idea, but boy, is he scandalized by it! I’m king of the freaks, no question.

Forget arguing over which of today’s poets or novelists will be added in the canon, for this is how the future will remember us — in prose that is playful, mysterious and inventive and refracted through neural networks and invisible global borders. It’s the song of this era, a shapeshifting epic that continues to unfold in thousands of inboxes, hour after hour, yet always telling the same timeless story: You rubbed one out, and I saw, and I’m gonna show everybody else.

Once you realize this isn’t true, you’re free to enjoy the beauty of the form. And go on crankin’ it in peace.