Look, if this squishy, textured baseball mitt doesn’t work as a sex toy, you can always play catch with it

But how does this apparatus work, and who in the fresh hell invented it? More importantly, who’s using it — and why? To find out, I dove into the annals of Shots America, a California-based sex toy wholesaler, and went ahead and answered all your burning questions before you even asked.

To answer this question, we’ll need to briefly return to Hellraiser. In the movie, a pathologically horned-up man named Frank tracks down a puzzle box that’s rumored to open a portal to a realm of new carnal thrills. Instead, the box summons a quartet of sex demons bent on subjecting Frank to the extremes of sadomasochism — and, eventually, an excruciating death.

Uh, okay. How does this thing work?

The original model, which came out a few seasons ago, is pretty straightforward. You wear it on your right or left hand, and it sports a dotted texture on all four fingers. (Think… corncobs. Four little sexual corncobs.) The rest of the glove features what the website calls “a sensuous ribbed design for some sensuous play,” which I imagine might involve everything from digital stimulation to fisting to running your hands over a partner. Most notably, the glove has a large hole between the thumb and the index finger that is, coincidentally, the perfect size for a partner’s mouth and/or the head of a penis. Ah, what fun we’ll have! The original model is available on Amazon, but out of stock at the Shots America warehouse.

Tell me about the new model.

Who… are these gloves for?

To find out what the community is saying, I trawled Amazon reviews. That was easier said than done since an Amazon search for “Fist It Silicone Glove” directs the user to a series of tasteful barbecue gloves. Eventually, I found a whopping total of five reviews for the original glove design, with two users reporting that the glove ripped almost immediately and one user reporting that it “tasted weird.”

Who hath wrought this foul thing?

You said there more of them? 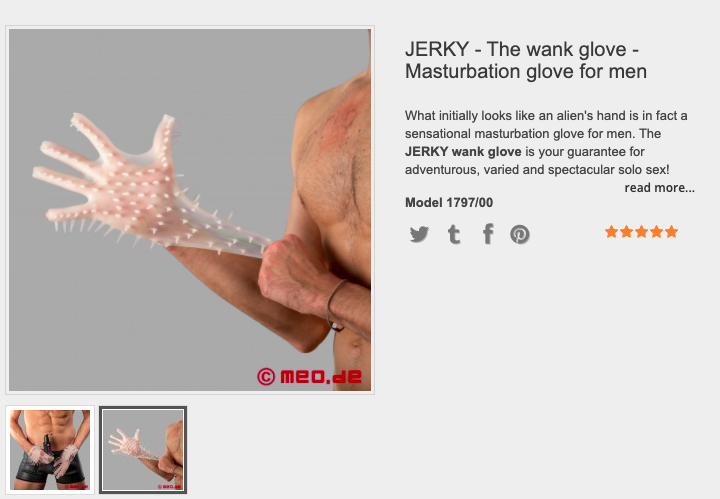 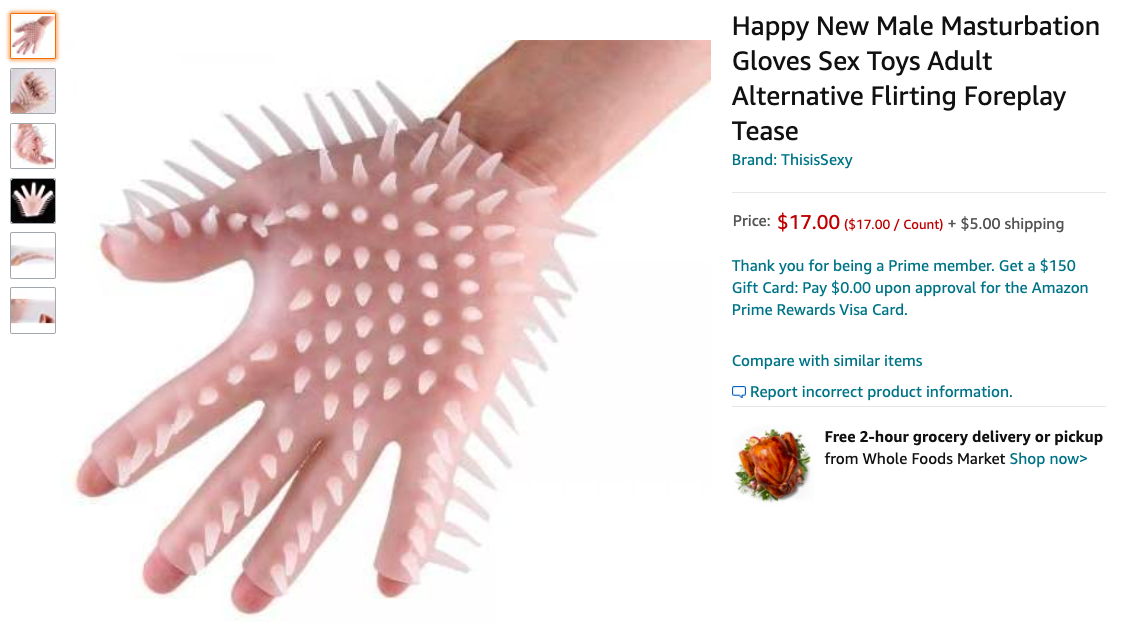 Where can I buy these strange gloves?

Like I mentioned above, the original FistIt Silicone Glove is available on Amazon. So are the others.

Wait, sorry — you can buy sex stuff on Amazon?

Oh, yeah. You can get all kinds of stuff. You can get this butt plug that looks like a horn of plenty. You can get this disembodied ass featuring “plump butt and sexy curves.” According to Nick, it’s a pretty straightforward market for sex toy retailers. Of course, Amazon has some restrictions — for example, something like a penis pump would need to be classified under “sexual wellness,” which, lol. It’s also important to note that sites like Shots America don’t usually sell directly to Amazon; instead, they sell to distributors who sell to stores, and some of those accounts put the products on Amazon.

I don’t want to buy sex stuff from Amazon.

Yeah, me neither. Shots America is a wholesaler, so you won’t be able to order the glove directly from their website. You can, however, find some of their products at major retailers like Walmart, the Home Shopping Network and sites like Groupon. If, like me, you’d rather not support a corrupt corporation in your quest for a blistering orgasm, your best bet is to head to your local sex shop to pick up the glove.

Last question: How does Hellraiser end?

Lillian Stone is a freelance humor writer and reporter. She has two thoughtless little dogs and writes jokes from her Chicago apartment where the theme is Grey Gardens, But Sexy.