Why Won’t Lloyd Blankfein Tell Us What He’s Really Afraid Of?

Suddenly, megarich investment bankers, war hawks and lifelong conservatives all seem to know what’s best for the Democratic party. Maybe they think we're too dumb to see right through it

Nothing is assured at this stage of the Democratic primaries. But so far, Bernie Sanders has done quite well. Or well enough that the party establishment and media are rattled. You have Chris Matthews worried he’ll be executed in Central Park if Sanders takes the White House, Hillary Clinton rehashing her grievances against him, that kind of thing. These warnings would be suspect even if they did not jibe with concerns from other extremely cursed corners — but they do. Here is a genius take from Lloyd Blankfein, senior chairman at Goldman Sachs: 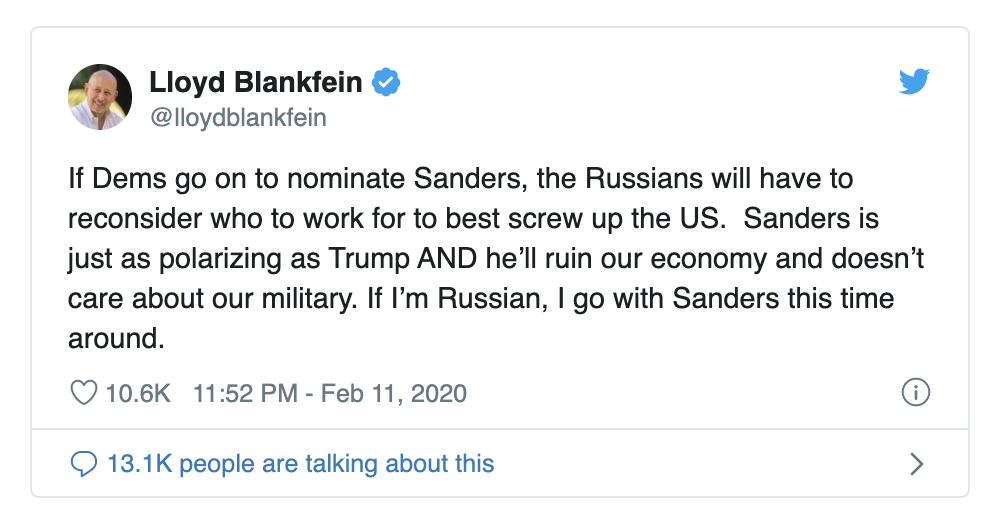 Vague doomsaying about “the economy” and a dash of Russophobia? Killer combo. Just one question: In 2009, didn’t you yourself publicly apologize for helping to destroy the economy? Because you were CEO at Goldman leading up the Great Recession? Remember? I think Bernie does…

Gee, that was back in the summer of 2019, and you’d hope Lloyd would’ve retired from Twitter in disgrace shortly after. Except shame’s not really his thing. So a couple months after complaining that Elizabeth Warren was mean to him in a campaign ad (making a “joke” at the expense of indigenous people in the process), he’s back to convince us that Bernie is all four horsemen of the next financial apocalypse. Well, he is the expert. But also, quite obviously, Bernie and Warren are the candidates threatening to tax his ill-gotten $1.3 billion fortune and regulate his lawless, exploitative industry.

You might respect him the tiniest bit if he came out and said, “I’m afraid of being less rich than I am right now.” Don’t be afraid of the truth, Lloyd!

Aligned with Blankfein, the sellout Democratic insiders and “liberal” but Bernie-skeptical media are the dwindling ranks of NeverTrumpers, former hardcore neocons alienated from MAGA nation, who are given space in the newspapers and on the cable channels that already undercut leftism in passive-aggressive fashion. Somewhere along the line, these tools decided that criticizing Trump now and then made them natural authorities on Democratic strategy, and wow, they hate the socialist guy with a shot at the 2020 nomination.

But sure, this Max Boot fellow is only worried about electability. It’s not like he was arguing last year that a forever war in the Middle East is good, actually. These are the same voices who defended Bush’s torture regime and couldn’t stop telling us why corporate tax cuts benefited the average American, and their annoyance at Trump’s boorish airs — he keeps saying the quiet part loud while incompetently pushing much of the vile agenda they’ve always dreamed of — in no way allows them to reckon with Bernie’s appeal. Therefore, Sanders is an aberration. And he “cannot win.”

What all these people have in common is that they’re frequently wrong and transparently self-interested in everything they say or write. Rarely have they acknowledged mistakes, let alone learned from them. The greater insult: They assume we don’t recognize who they are and where their interests lie. A Bernie victory would put the lie to their fundamental, endlessly repeated, stagnant conceptions of this country, and for anyone making a living as an “expert” in business, politics or media, that is an existential threat. Or so you’d believe. History tells us, to the contrary, that they needn’t fret.

Nobody to this point has managed to hold them responsible.