Justin Bieber Was Right to Corncob That Burrito

After watching the pop star tackle a burrito from the middle, I went to L.A.'s Mexican food experts to uncover the truth — and now I'm left with a theory that shakes me to the core

I’m not what you’d call a “foodie.” This week, I made dinner in a crock pot for the first time in my life; I’m also 33 years old. If you put objectively terrible pizza in front of me, I will eat three slices. The real reason I don’t switch to Soylent is because I don’t need diarrhea. What I’m saying is, you’d be smart to take my eating opinions with a grain of salt.

But, like a majority of the online commentariat, I was aghast at this photo of dirtbag pop star Justin Bieber, in which he’s poised to take a monster bite out of a burrito. Sideways.

Now, I don’t know what’s gone on in your life. Maybe chomping into a burrito like it’s corn on the cob is normal for you, in your family or wherever you come from. When I think about how I consume a burrito — which is to say by gnawing into one end while keeping the other wrapped in foil and eating down the length of the tortilla tube — I realize this approach was never taught. It’s only what feels natural to me, and I’ve never seen people handle burritos in any other way. When I have the benefit of the plate, and the burrito is quite messy, I’ll use a fork and knife. Yet even this strategy seems implicitly verboten. Our collective reluctance to deviate from the One True Burrito Ingestion Method™ makes me wonder if we’ve been slightly brainwashed.

So along comes Bieber to challenge this dogma. And people had a hard time with it.

Being an L.A. taco partisan myself, I needed a better grip on this outcry. And so, I reached out to my burrito-fixated buddy Nick, a writer, editor and longtime resident of the Bay Area — the California region of legendary burritos and zealous burritoheads — for an expert breakdown of Bieber’s technique. “What Bieber is doing (corncobbing, aka riding sidesaddle, aka breech birth) is obviously unacceptable on many levels,” he writes, proceeding to lay out his argument like beans and guacamole: “One, burritos should always come wrapped in two layers of foil (maybe his didn’t?), and you never wanna unwrap all at once. Two, the foil should be opened from top to bottom and either torn away in spirals or peeled down like a banana. This allows you to eat down the burrito, keeping what you haven’t eaten yet warm(er), the juices in and maintaining the cylindrical architecture of the burrito. Three, burrito ingredients are laid out in columns from top to bottom, so when you enter from the side, you get a blast of a specific ingredient.”

Fair enough, and plenty of reason not to attempt the maneuver yourself. The prevalence of such thinking, however, had people grasping to explain why Bieber did what he did. Was it his upbringing as a child celebrity that warped him? Do all Canadians eat burritos this way? Could the wrong combination of recreational and pharmaceutical drugs be at the root of the spectacle?

My colleague, MEL Deputy Editor Alana Levinson, thinks it’s nothing more than a deliberate goof to get people talking. If she were famous, she said, “I’d do stuff like this all the time to mess with people.” I can’t dismiss this theory out of hand. Still, a part of me believes it’s far more likely Bieber was kind of blazed and blew his own mind with a radical hypothetical: Dude, I always eat burritos the same way. It’s boring. What if I did it… like this?? Game-changer, man!

On Twitter, I saw speculation that he’d chewed through the middle and then nibbled on the remaining “stumps.” Yes, it would take fine motor skill, but it’s hardly impossible.

The more I studied the image, the less I felt any element to be definitive. We heard chatter about whether this guy was Bieber at all, or some hypebeast doppelgänger. And putting aside the hoax narrative, the food itself is unconfirmed.

So here’s my theory. Zoom in a little; suddenly the assumption of burrito looks a little shakier. The thing is barely cylindrical. Should we have been so quick to rule out a pita-encased gyro or shawarma, with their different orientation?

Yeah, I’m starting to hear the X-Files theme song in my head, too. But look! Maybe this burrito is terribly wrapped, or maybe that’s a food pocket with a long, open top. 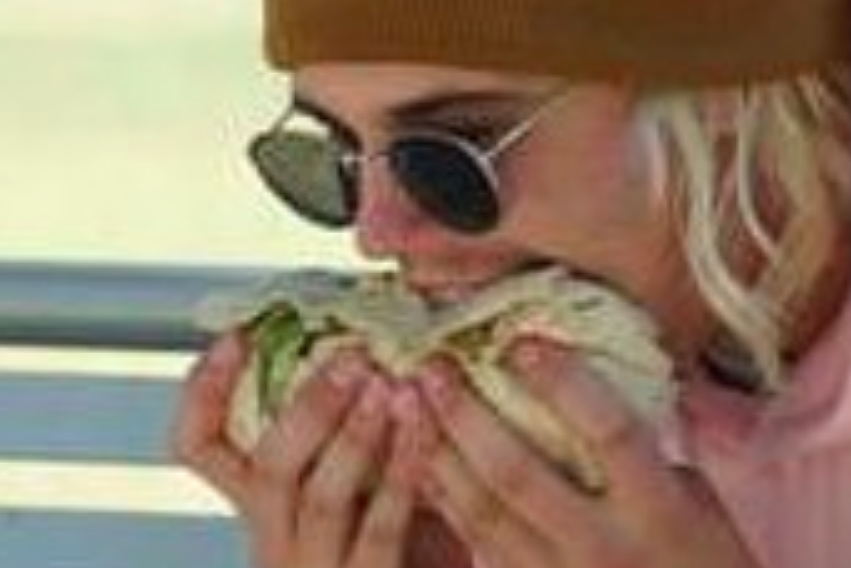 Or — bear with me — could the middle-out burrito method actually be a thing?

Taking all this as it first appeared: Justin Bieber is face-bombing into the equator of a burrito like he’s eviscerating a small creature with his teeth. Given that frame, there’s a decent chance he usually eats burritos this way — which increases the odds this is a fad not limited to our beautiful boy. He might have picked it up from someone else, or supposing it was his original innovation, he may have passed it on. (Think back to the Seinfeld episode about eating candy bars with utensils.)

To get perspective on this, I made a short trip to Tocaya Organica in Venice, perhaps the trendiest West Side taqueria at the moment. If middling-out a burrito was on its way to a countercultural, iconoclastic “cool” factor, I figured, this restaurant would already know.

After making my way to the front of the line, I ordered a taco (I told you I was loyal) and asked the two young women at the counter if they’d seen the now-viral photo of a dude who is probably Justin Bieber attacking a burrito-ish object on a park bench.

They hadn’t. I showed them, and they were as baffled as the rest of us.

“What? Why?” asked the one who’d taken my order.

“I feel like that would just… the beans…” she said, gesturing to indicate uncontrollable chaos.

“That is so weird,” her fellow server agreed, as both of them began to laugh. “I don’t know how you could do it that way. It would be a mess.”

But had they seen any customers lean into the style, defying conventional burrito wisdom? “Never,” said my server, shaking her head. “Nobody does.”

I wondered aloud: Would she take a friend aside and talk to them if she saw them doing this? “I think so, yes,” she answered. They need help.” The two of them continued to giggle at the idea.

Meaning, best case scenario: Bieber — or whoever — is too far ahead of his time. Though I hope that won’t change how he engages with burritos. Nobody ever blazed a trail without some sacrifice. To revolutionize burrito-eating, you’ll have to start out getting roasted by the entire burrito-eating world. Then they start eating like you. Then you win.