The Definitive Guide to the Web’s Most Important Meme Juices

I’m drinking coffee, but when I look at it, some irretrievably damaged part of my brain calls it “bean juice.” Tap water I have come to think of as “plain juice.” Shortly after I woke this morning, I drank a raspberry-lime Spindrift, a sparkling water flavored with real squeezed fruit — juice, in other words. All around me, in greater Los Angeles, people are driving to and fro with every juice you could name snug in their cupholders: celery and kale and carrot and apple-ginger-coconut. Maybe soup is a kind of juice, too?

The resurgent juice trend appears to be linguistic as well as health-conscious, infiltrating our slang and memes. Fluid, endlessly variable and enjoyed by almost everyone, it makes for a fine lifeblood. Millennials nostalgically thirst for perspiring boxes of Hi-C Ecto Cooler and shiny pouches of Capri Sun, and they also coin phrases like “dumb bitch juice,” a hypothetical beverage that one is said to be sipping on before committing an act of wanton stupidity, like drunk-texting your lousy ex. In fact, if you visit a bar called Mood Ring in Bushwick, you can literalize this experience with their tequila-based Dumb Bitch Juice cocktail. And if you think of yourself as more of a dumb fuck than a dumb bitch, well, there are other shitposts you may find relevant. Juice abounds. 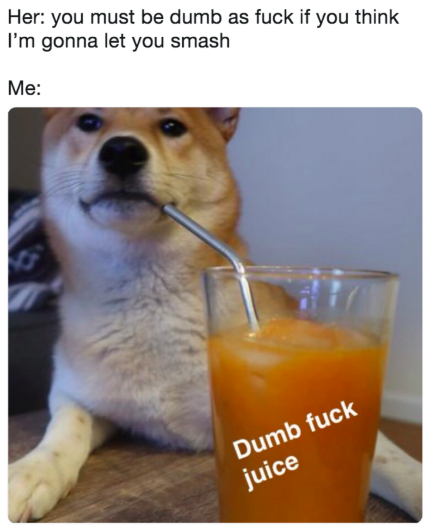 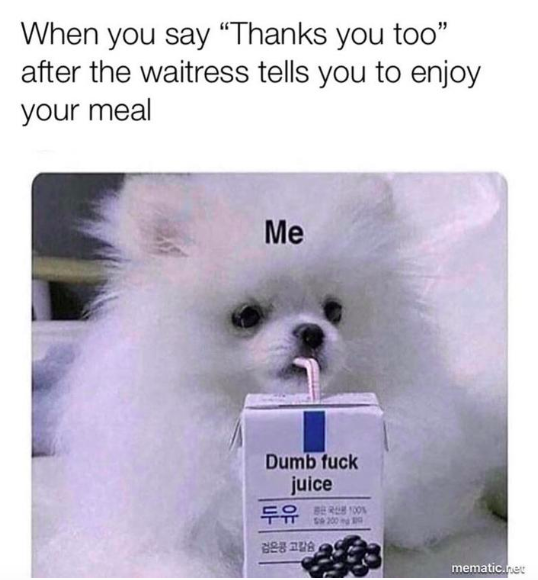 Such memes were obviously preceded by the ultimate metaphorical beverage, “tea,” a term for superb gossip that originated in black drag culture and gave rise to the popular image of Kermit the Frog sipping a cup while ironically stating “that’s none of my business.” A more direct forerunner of the dumb juices was “bone hurting juice,” which some have classified as an “anti-meme” for its meta-surrealist premise. This juice dates back to a Winnie the Pooh webcomic from 2016 that established the narrative arc: Someone accidentally imbibes bone hurting juice, which, as you might suspect, causes aching pain to the skeletal system of the drinker, who then exclaims, “oww oof my bones.” The formula for formula’s sake and deliberately dumb punchline (shades of Idiocracy’s “Ow! My Balls!”) make for a stealthy critique of internet humor at large — but the ingredient preserved in subsequent juices is that dose of bizarre, self-inflicted harm. 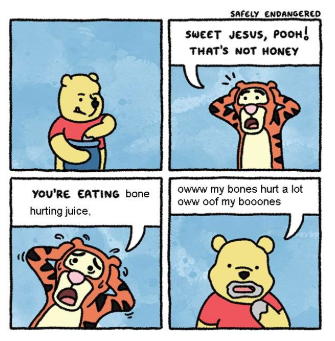 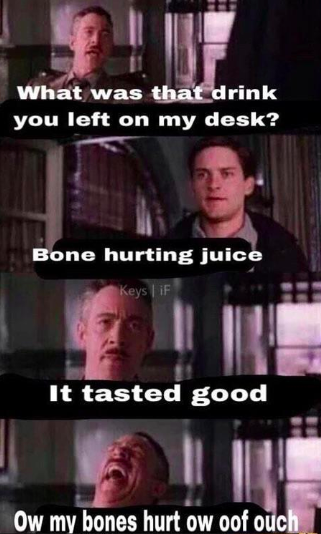 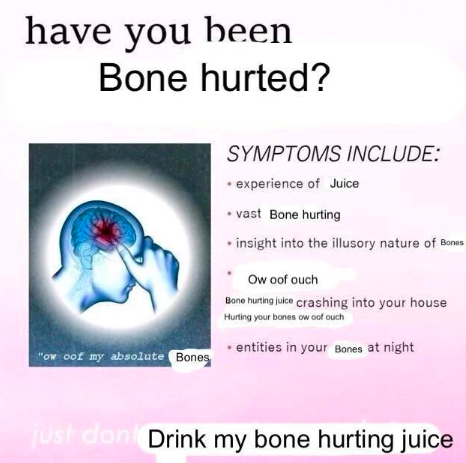 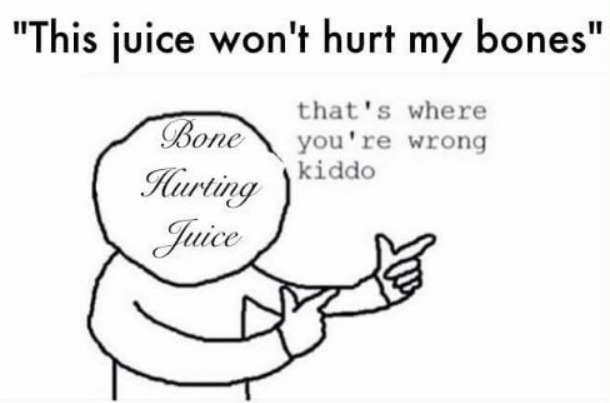 So, a couple questions: Who would drink any of this stuff? Why would a juice that hurt your bones or made you dumber exist in the first place? You might as well ask how people are still icing each other and buying Four Loko in 2019, or stirring a fake viral trend around the ingestion of Tide Pods. At some level these products, whether real or joking, reflect a generational fondness for physical and mental oblivion. Social media itself can be a fountain of toxic ooze that seems to erode our faculties, and day after day, we gladly lap it up. We poison ourselves with “hate-reads” and withstand the radioactive heat of “nuclear takes.” And wouldn’t you know it, there’s a juice that cuts to the heart of our appetite for harmful trash. Should you come across a ratioed tweet in which a person has articulated an uninformed, asinine viewpoint, you may see a reaction image of a bird taking a BIG SIP from a glass of “bad opinion juice.” 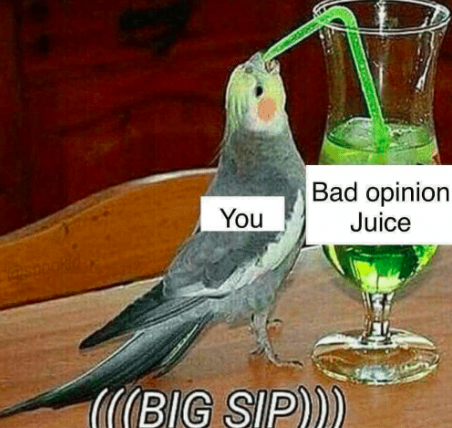 I’m tickled by the reflexivity of this accusation — the way it doubles back on the critic using it. For while it provides an unambiguous way to rebuke someone’s position (You’re drinking bad opinion juice; therefore your opinions are bad), is it not the respondent who, by absorbing the pundit’s foolish statement, drank the bad opinion juice? Are we not nourished by the steadily flowing ichor of bad opinions, cozy in the mindset that our opinions are correct, and the rotten ones will be mocked? Another version of this photo has the bird drinking “unsee juice,” alluding to the common web complaint of random exposure to stuff a normal human would rather avoid. But unseeing, of course, is not possible, nor is it what we actually want — by logging on, we assume the risk of stumbling upon deeply objectionable content, and for the most part, we don’t delete our accounts when we do. Saying you wish to “unsee” something you encountered online is a lot like saying “oww oof my bones” after downing a bottle of bone hurting juice: It was inevitable, and you probably knew better, but you also didn’t. 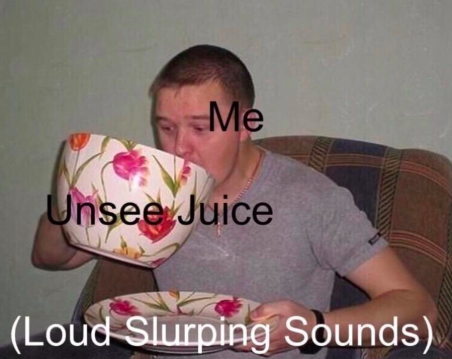 Crucially, in any juice meme — including the wholesome type, like “unconditional love and support juice” — we distill a cognitive state to its essence, just as fruits and vegetables are (allegedly) pressed for their key vitamins. Nowhere was this clearer than in the case of “Zucc juice.” Last spring, Facebook CEO Mark Zuckerberg testified to congress and came off as a stiff, robotic weirdo, right down to the way he raised a glass of water to his mouth. Already a favorite target for meme creators, who adopted the term “Zucc” to talk about the ways in which the Silicon Valley billionaire sucks, Zuckerberg here inspired the conceit of renaming water “Zucc juice,” and a petition to that end gained more than 50,000 signatures. It was as if to suggest that Zuckerberg cannot be anything but Zuckerberg, and is further unable to sip a beverage that doesn’t conform to his singular programming. To extrapolate: You are what you drink.

It may seem, then, that the juices drip from a determinist world — that you only know which kind you’ve been sipping once you pull a dumb bitch move, or your bones start hurting. Likewise, it took years of refreshing the timeline to realize what we had absorbed there, and looking at a ton of juice memes is a sure guarantee that juice-thought will start to take hold of your consciousness. As I admitted, juice is now an organizing principle in my own habits. Thankfully, we still have a choice here. Do I want to chug some lazy juice (take a nap)? Or sip on a little vanity juice (post a selfie)? Or could I break out the friend juice (invite folks over to a party)? My fridge is full, and I am the discerning drinker of any destiny in there. The only limit, I think, is my bladder.