The Jeremy Renner App Was Our Most Surreal Social Network

In the end, the irony-poisoned wouldn’t let Renner Nation exist

I remember the exact moment I knew I’d lost all contact with American reality. It wasn’t, as many would pinpoint it, when Donald Trump was elected president. The epiphany occurred in the spring of 2018, as I stood on line at a movie theater in a small California town, eavesdropping on the group in front of me. One of these guys pointed to a poster for the upcoming movie Tag, based on a real-life story of grown men who play the game for a month each year. The cast included familiar faces: Ed Helms, Hannibal Buress, Jake Johnson and Jon Hamm. Yet the dude in line seemed indifferent to this comic talent, drawn instead to the fifth, oddly serious-looking actor on display.

“Oh, I definitely want to see this,” he said. “It has Jeremy Renner.”

Reader, I did not understand. Like many moviegoers, I became aware of Renner through his star-making, Oscar-nominated performances in the gritty action dramas The Hurt Locker (2008) and The Town (2010). These were preceded by smaller roles and indie projects, and followed by a run in Marvel’s Avengers franchise as the oft-ridiculed Hawkeye, an emo sort of fellow who is handy with a bow and arrow. Overall, I viewed Renner as a workmanlike performer, capable of the moody masculinity that Hollywood often requires. Not once in the decade of knowing who he was did it occur to me that his image alone could be enticement to spend $14 on a theatrical experience, but here was a voice — a voice of the people — telling me otherwise. I recall literally nothing else of that night.

So I was not entirely unprepared to learn, a few days ago, that Jeremy Renner has an app. Well, had an app. It was shut down Wednesday. 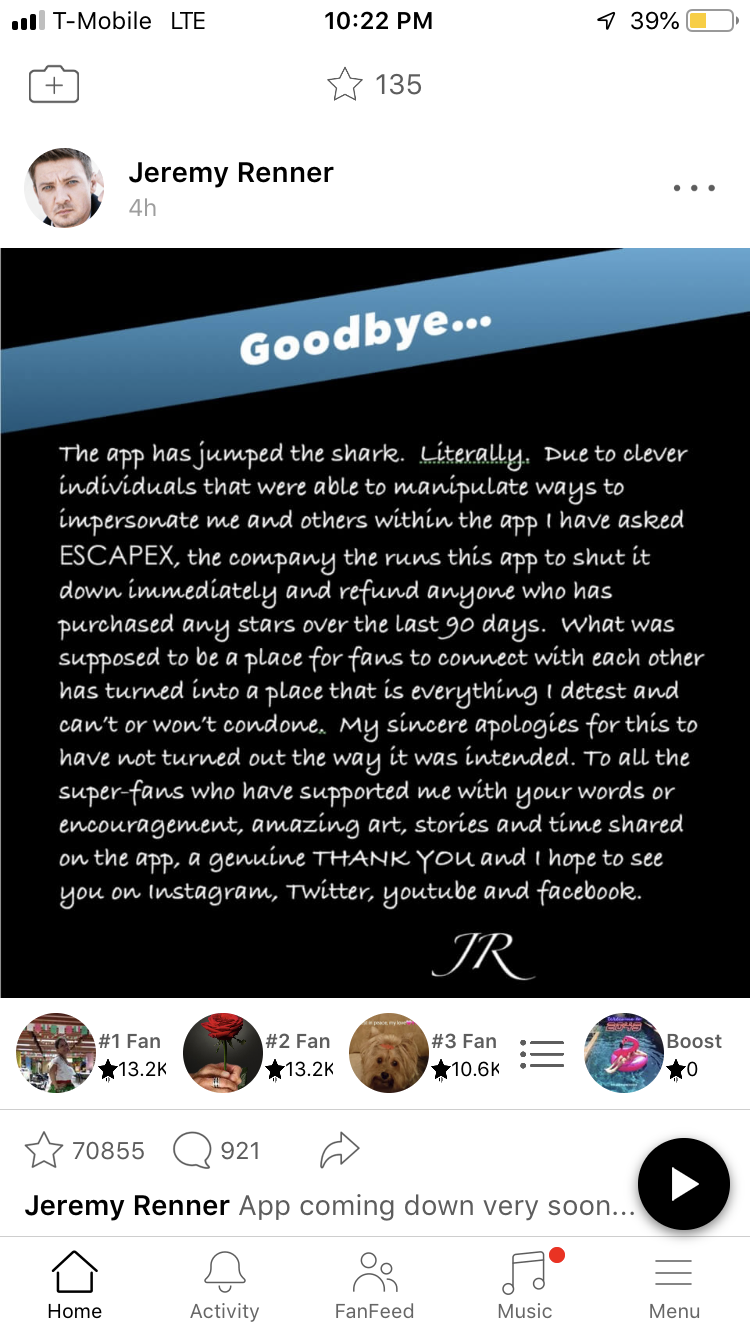 The app was called “Jeremy Renner,” as if to collapse the man, the brand and this social network into a single entity. Indeed, that was the user experience. When you first logged in, you were treated to an auto-playing video of Renner describing, rather vaguely, what the app is for; thereafter, the loading screen was a glamour shot of Renner. 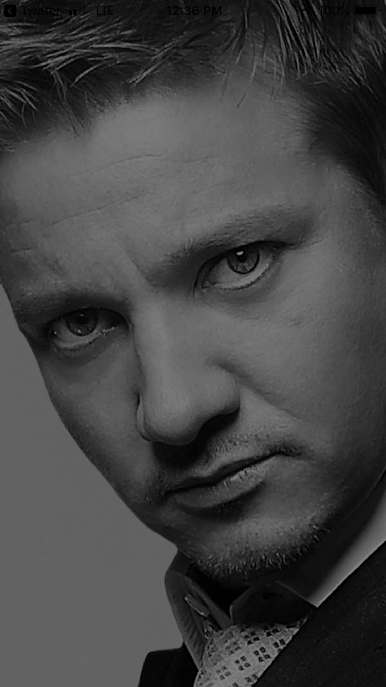 You received a push notification each time Renner posted on Jeremy Renner, and the main feed, as quite a few reviewers noted, resembled an Instagram clone on which the only person you follow is (you guessed it) Jeremy Renner. 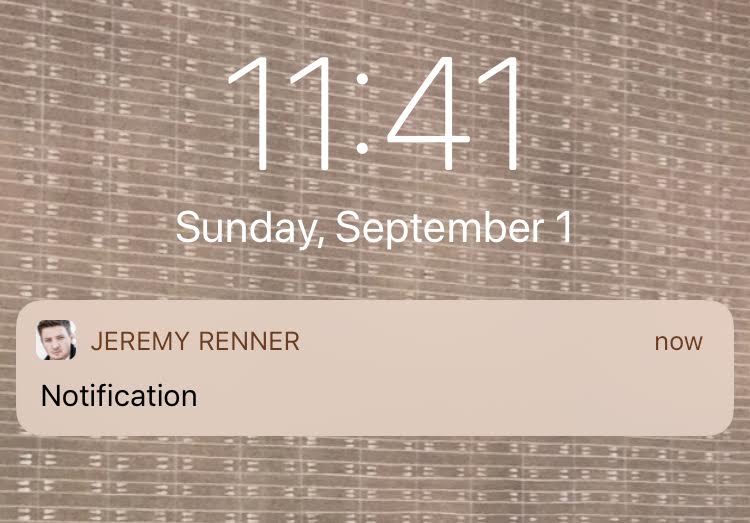 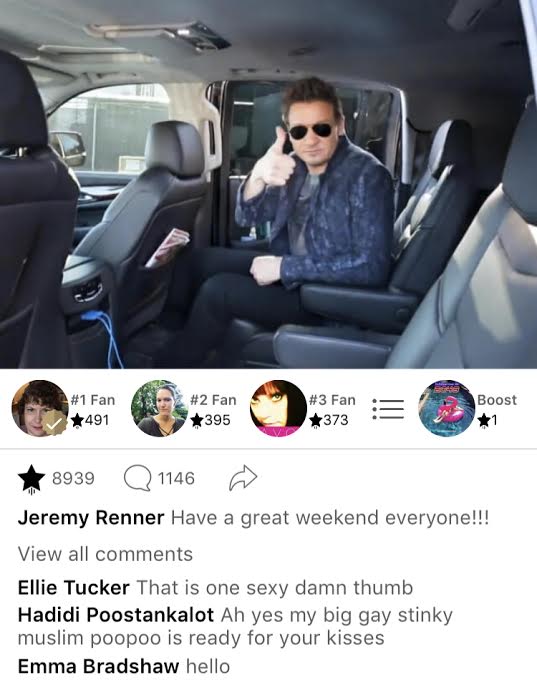 As most of this content was ported directly over from Renner’s pre-existing Instagram account — to the disappointment of some loyal fans — I’m left to conclude that the app’s real purposes were two-fold: 1) to promote Renner’s rock-star ambitions (while not exactly new to the industry, he’s released a handful of singles as a “solo” act this year, which you can sample in the “Music” feature); and 2) to milk the true devotees for any expendable income. To that end, a “star”-based hierarchy determined whose comments were promoted, allegedly to be seen by Jeremy himself, and you could purchase up to 14,800 of said stars (at a price of $99.99) per transaction. By Wednesday evening, I’d collected 128 stars, 100 automatically gifted to me for the favor of posting a single innocuous comment, the rest bestowed by actual Renner-heads.

However, no pure grift could last. Toward the end of its life, the Jeremy Renner app was infested with fakes and trolls. 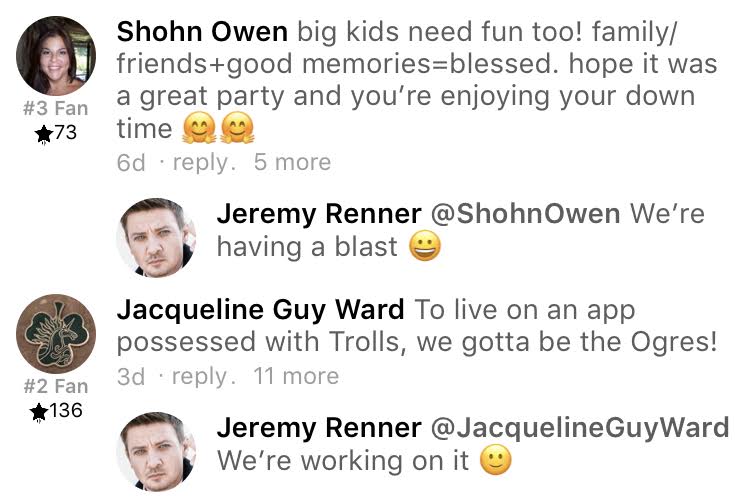 And while I commend the army of wackos who finally ran the app into the ground, I found myself deeply fascinated by — and sympathetic toward — the good-faith users who begged them to stop. When you toggled over to the “FanFeed” section, you found the normie fans battling for control of the space with a steady stream of Renner pics, wholesome selfies and admonishments of any jokesters not taking the platform seriously. This stuff far outweighed the occasional meme or shitpost, and its utter banality began to remind me of a “normal” social network like Facebook, even if the comments frequently devolved into the troll-speak typical of a place like 4chan. 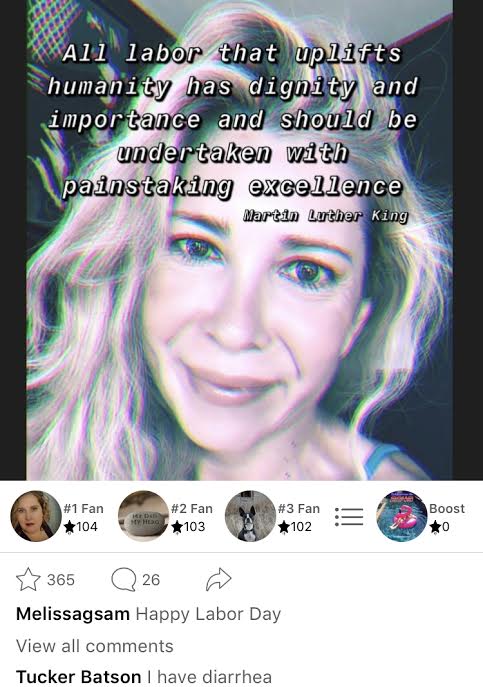 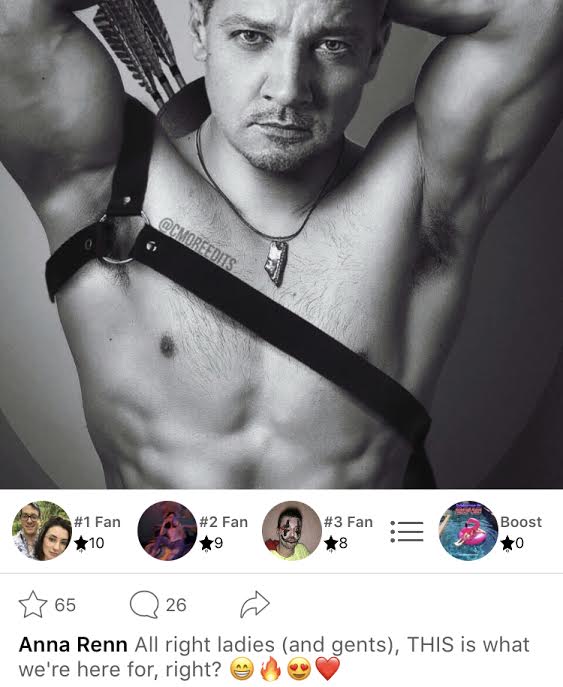 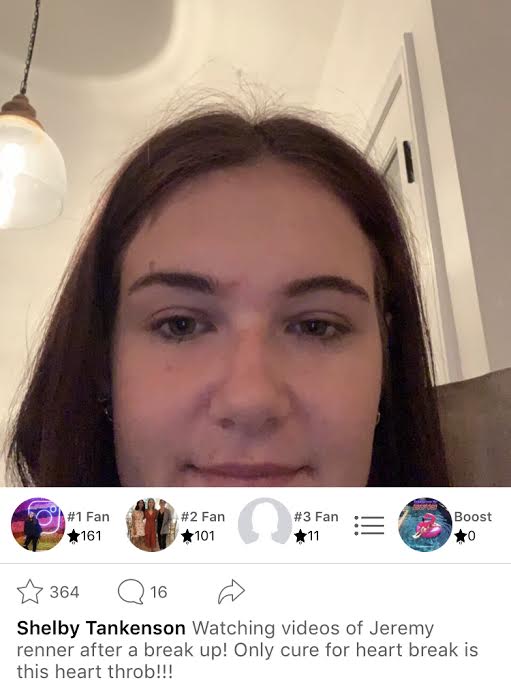 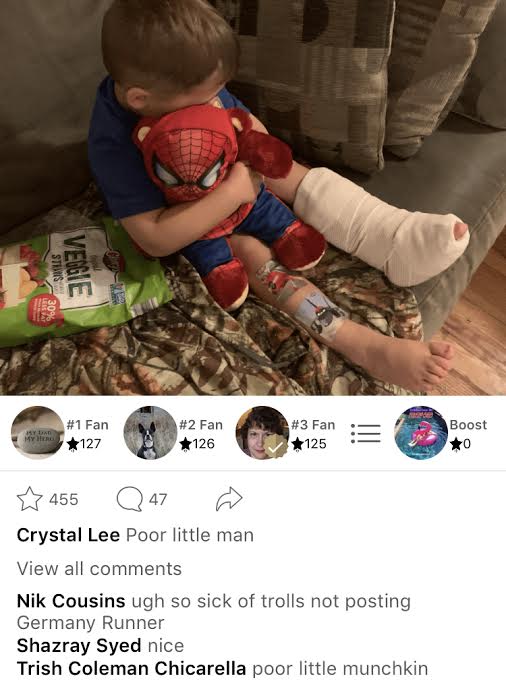 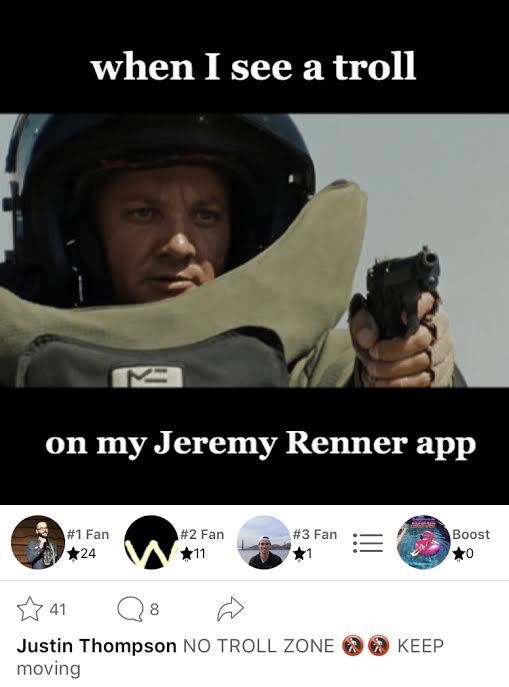 The mind-bending thing at that point: you could no longer tell who was a genuine Renner stan and who was play-acting as a Renner stan for the laughs. To the irony-poisoned like myself, it’s tempting to think the trolls had established a powerful majority committed to character work. But if the schtick of insincere support for Jeremy Renner is to possess any comic value, there has to be something inherently ridiculous about loving Jeremy Renner. As I learned on that evening at the cinema last year, there isn’t.

People do love Jeremy Renner. He’s a phenomenally well-paid movie star. He’s an Avenger. He and his music are in a Jeep commercial. The idea of a Jeremy Renner app, versus an app for any other celebrity, is only bizarre if you live in denial of his runaway success — which is another way of saying you can’t reconcile the cultural mainstream with your own presumably elevated tastes.

This whole time, a self-appointed class of online comedians has been asking, “Who on earth would join a social network devoted to Jeremy Renner?” The answer is: Jeremy Renner enthusiasts, and they are legion. Our disbelief, not Renner Nation, is what’s puzzling and laughable, the same way a certain population flies annually into a rage over pumpkin spice lattes while a gigantic customer demographic happily slurps them down, unaware of the slightest internet mockery.

All of which makes the fall of the Renner app actually quite sad. The normies deserved better. This was the final comment thread: 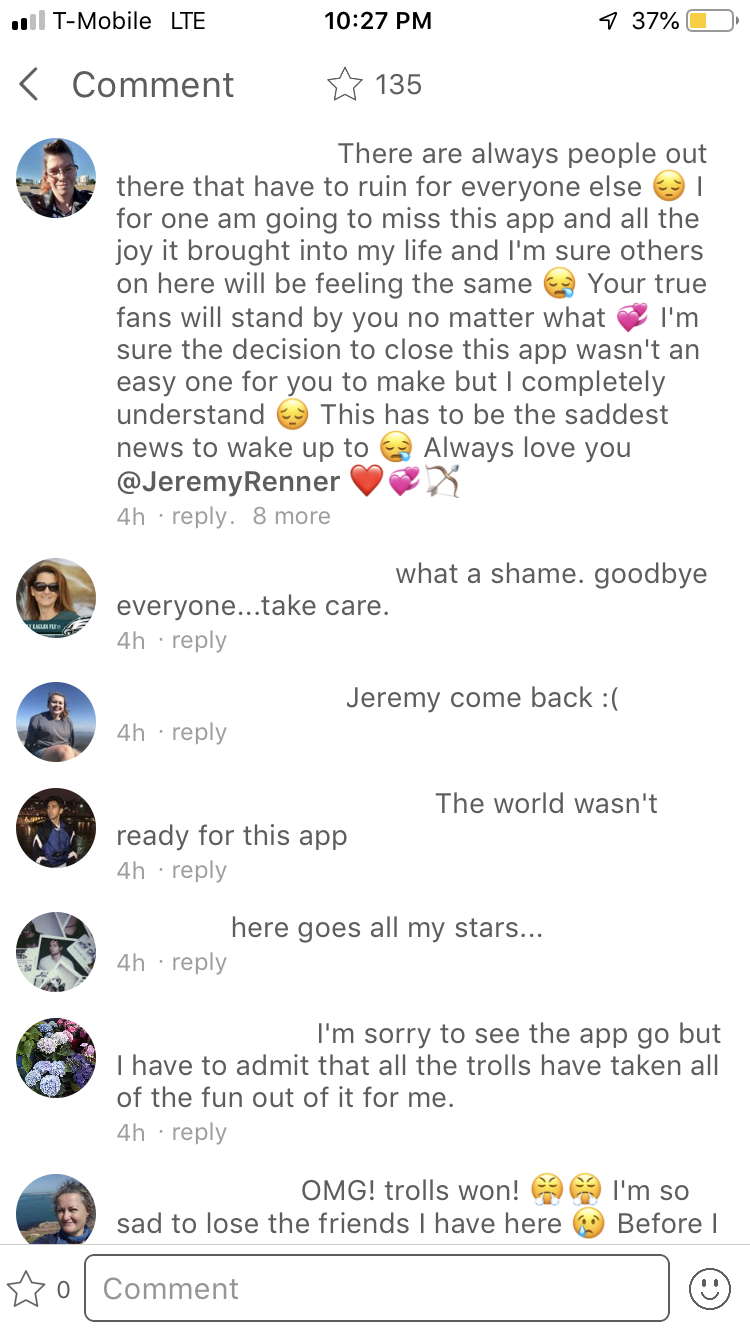 Somewhere down the line, we will have to face up to this, our mistaken belief that not giving a shit about Jeremy Renner means we’re immune to the world in which he thrives. I believe most of the users on his app were there to bask in his reflected glory. The rest of us lacked any such excuse.