These days, you have to try pretty hard to shock me with your October-only pumpkin-flavored food or beverage offering. The runaway success of Starbucks’ pumpkin spice lattes, which have reliably appeared each of the past 15 autumns, has given way to pumpkin everything — pumpkin bagels, Oreos, vodka, kettle corn, pasta and chewing gum — such that you hardly bat an eye at such novelties anymore. But the audacity of pumpkin-flavored chicken wings was enough to break through the pumpkin saturation and make people take notice, which is surely what beer/chicken/sports restaurant chain Buffalo Wild Wings hoped for when it hyped a a “BBQ pumpkin ale” sauce.

Now, B-Dubs has struggled lately, and last fall, it was taken over by a private equity firm in what some took as a sign of casual dining’s slow demise. Perhaps, by tapping into pumpkin spice’s assumed virality, they could ensure better sales over the course of big football weekends, baseball playoffs and the start of the NBA season. That people voiced disgust at the idea was hardly a problem — the point, you could say, was to get them talking about the brand, increasing the chances they’d visit. If initial horror gave way to a morbid curiosity about the pumpkin sauce, well, so much the better. And that is exactly how I wound up at Buffalo Wild Wings on the afternoon of Game 5 of the NLCS between the L.A. Dodgers and the Milwaukee Brewers, eating fucking pumpkin wings. 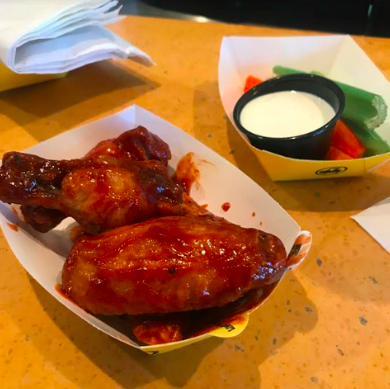 Why? What was I thinking? Only that I had to know what they tasted like.

After taking a seat at the end of the bar, I first ran into trouble when I couldn’t locate the limited-time BBQ pumpkin ale sauce anywhere on the menu, or a promotional sign for them. I briefly fantasized that this had all been a dream or a hoax, and the momentary spike of relief — I wouldn’t have to eat this shit after all! — was awesome. But, journalist that I am, I had to make sure. When the woman tending bar came to get my order, I sheepishly asked: “Uh, I saw, online, there were, like… pumpkin wings? Do you, um, have those?”

A flash of surprise and recognition registered on my server’s face. “Yes, we have them,” she said, hesitating slightly. “I’ll get those,” I told her, sighing. At this point, she looked concerned. (I am not revealing her name because I do not want B-Dubs corporate to punish her for being insufficiently enthusiastic about the BBQ pumpkin ale sauce.) I asked for the fewest wings possible — five — with the usual carrots, celery and blue cheese dressing on the side. On the drink side, I figured a boozy IPA would dull the pain. I sipped it and awaited my “meal” as the Dodgers tied up the score 1-1.

Rather too soon, the wings arrived. Sniffing them, I was assailed by hints of cinnamon and nutmeg. I selected a drumstick and tried to bite into it normally. An explosion of greasy sweetness on the tongue — the seasonal spices were there, but I instantly understood that maple syrup was the dominant force here. The sauce is only pumpkin-like to the extent that you associate the squash cultivar with the rest of the stuff that goes into a pumpkin pie to make it a dessert and not some weird veggie casserole.

Sitting to my left, also by himself, was a man around my age, alternately watching the game and reading articles on his phone. His name, I found out upon awkwardly interrupting his leisure time to get a fellow dude’s take on the pumpkin phenomenon, was Pierce. “I don’t know that I’d have that interesting an opinion,” he demurred. “It seems like it’s just everywhere this time of year, something that you live with — like at Christmas. It’s part of the season.” I agreed, speculating that in a place like L.A., which lacks most of the weather and colors we consider “autumnal,” markers of our place in the calendar are especially valuable. “Oh yeah, that’s interesting,” Pierce said.

Having drawn him in, it was time to strike. “I ordered these pumpkin sauce wings,” I admitted. “They’re bizarre. Do you wanna try one?”

Pierce’s answer wasn’t rude, but it left no room for persuasion. “No!” he said, aghast, then laughed at either my question or his quick reaction. “No, I don’t think so.”

So much for my focus group. I couldn’t blame him, having managed just two wings myself. While the first had been a kind of sugary agony, I found myself more positive on the second — as if it was slathered in chemicals both noxious and addictive. But by the time I attempted a third, my face felt numb and tingly from what I was ingesting, and I took a definite turn toward queasiness.

“How did you like the sauce?” my bartender asked. I was too dazed to be diplomatic.

“Really weird,” I said, explaining that I wanted to write a piece about them. “Have you sold a lot of these?” I asked.

“Oh, great,” I said. “I could tell you were worried for me when I ordered.”

“Could you?” She laughed. “I need to get better at hiding my reactions.”

“It’s right here,” she replied, indicating a tiny bit of text in the middle of the fold-out, without an accompanying image, amid more appetizing deep-fried fare. “But actually, we didn’t have it for a couple of weeks after we were supposed to.”

The game was heating up, and then the Dodgers were pulling ahead. Cheering became more frequent, boisterous. Desperately trying to salvage whatever reporting angle I’d walked in with, I asked Pierce if he thought that dunking chicken wings in pumpkin sauce would sway men toward the flavor, which usually seems the province of women, with the pumpkin spice latte a key measure of the feminine “basic” aesthetic. Pierce was skeptical. “You know, I think girls like wings more than guys do,” he said.

Just then, a man and a woman sat down to the other side of me, the fellow in full Dodgers gear. They ordered two sets of wings with relatively normal sauces/rubs. Then I tipsily held out the menu to them and asked if they’d seen that pumpkin-flavored wings were available. They seemed astounded.

“Or peanut butter,” his companion added.

“I don’t do pumpkin or peanut butter,” he declared. “Who would order that?”

I would. I had. And I’d eaten most of what they’d given me. I probably would’ve eaten peanut butter wings, I realized. I settled up and hit the bathroom and then lurched out of the restaurant, puzzled that my fingers continued to reek of maple-cinnamon-coated poultry after I’d washed them at great length. Maybe the stink and stain will stay with me for days, a testament to my foolish experiment. What I know is that I can never go back to that particular Buffalo Wild Wings. Until they do a peppermint sauce for winter.