RIP to the iTunes Visualizer, Every Stoner’s Favorite Toy

Apple is killing iTunes, and not a moment too soon. The indispensable mid-aughts version of the jukebox application — the synonymous digital music store opened in 2003 — is nothing like the “overladen piece of software” in your toolbar today. Not only do I find the iTunes of 2019 cluttered and unnavigable by comparison, I sometimes can’t even get it to play the entirety of an album in sequence. It used to be my biggest problem was straightening out the track names of the mp3s I’d pirated from LimeWire.

The eulogies for this program remember it as both groundbreaking and maddening, which strikes me as on-brand for Apple. As a college student in its heyday, however, I mostly recall the good stuff: burning CD mixes for my radio show (or a crush), checking out other people’s libraries on the campus network (I once even met a friend through our shared obsession with the Magnetic Fields), and DJing dorm room hangouts. But it was in that final context that iTunes really shone brightest, thanks to a feature that proved endlessly fascinating to the kind of students smoking weed with a sock covering the smoke detector. It was called “the visualizer,” and it could transport you anywhere.

The visualizer was essentially a neo-psychedelic screensaver “set” to whatever music you had on. I use scare quotes because the central argument, once you and your friends got high, was whether these digital animations actually picked up on the rhythm or dynamics of a given song. At certain moments, the drums and kinetics of this morphing, multicolored abstraction seemed in perfect sync; the rest of the time, shapes appeared to spin aimlessly, or else propelled you through a 3-D wormhole with 2001: A Space Odyssey vibes. Often it was the abrupt transition from one pattern to another that made everyone say “Whoa!” — and if it happened to do this when the music shifted gears, too, minds were well and truly blown. The visualizer… was feeling something. 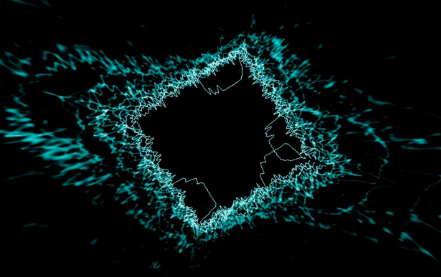 Soon enough, devotees were downloading tricked-out, custom-made visualizers to wow their fellow stoners, and Apple would eventually update their own to something a bit smoother and slicker. In fact, they bought another developer’s version, called “Magnetosphere,” and built it into iTunes 8. Even so, you still have the option today of toggling back to the “Classic Visualizer,” and I highly recommended it. The janky OG swirls and squiggles had the flavor of technology on the cusp of a different era, and yet its very inclusion in the software was like a funny afterthought — or the pet project of some coder who liked to drop acid every few months, smuggled into an otherwise exceedingly plain interface. Did Steve Jobs even know about the visualizer? If so, did it give him fond flashbacks to his druggy youth? What kind of portal had it opened for us?

In the grand tradition of potheads giggling over literally nothing, there are two ridiculous songs I closely associate with 2005–2006 visualizer usage. One was Imogen Heap’s “Hide and Seek,” which later became a full-blown meme and the “audio signifier for an overwrought TV death scene” thanks to an infamous sequence in the teen soap opera The O.C. and Saturday Night Live spoof. (Consequently, you may know it better as “Mmm Watcha Say.”) Whenever one good friend and I got cross-faded and had tired of old America’s Funniest Home Videos episodes, we cued up this hushed, self-serious tune and forced the visualizer to translate its haunting harmonies into a gaudy club rave aesthetic. Of course it was not up to the task, and the incongruity made us laugh like maniacs — or else we found ourselves zoning out, hypnotized by unlikely beauty.

The other track was Train’s “Drops of Jupiter,” a fairly cheeseball anthem you feel a bit guilty knocking because it’s about the lead singer’s late mother. Here, too, the humor was in the visualizer straining to do justice to something both deeply emotional and undeniably corny; because the weed imbued the display with separate consciousness, we chuckled at its evident “confusion.” In truth, I now believe we loved setting the visualizer to this song because both iTunes and “Drops of Jupiter” arrived in 2001 and together exemplified the turn of the millennium in all its try-hard, ’90s-hangover awkwardness. The combination made its elements into relics before they actually were.

It’s doubly strange, then, to relive or eulogize the visualizer experience, which was already a paradox of retrofuturism. Most of all, I see it now as a link to the blissful, wastoid idleness of pre-adult life — those years and nights when I had few genuine responsibilities and nothing better to do than light up in a darkened room and take this voyage into myself. When it wasn’t a comfort in loneliness, it was a silly ceremony for people who chilled together. But who has the time for this anymore? There are a billion shows to stream, social media feeds to check. Only a zen master might burrow into the visualizer of yore in a way that once came naturally to us. I’ve come through the other side to stand here blinking in the sun, wondering where the years have gone.