You can try, as I did, but you’re going to get burned — literally

Want to know why I lug around an extra 20 pounds on my formerly svelte frame? One word: Food. Well, that, and the fact that I haven’t the faintest idea how to get back into the gym in a way that doesn’t make me want to leave running (meh, walking quickly — don’t want to double over) and never come back. But mainly, I just fucking love food. The taste, the texture, the brightness, the perfectly crafted bite. I’m like Remy from Ratatouille — it’s my weakness.

I wish it wasn’t, I really do. I’d weigh less, that’s for sure. All those trans fats, all that sugar, all those empty empty calories — that shit adds up, the sum of which is love handles and high blood pressure. I’d also likely have more money. Trying to visit each and every one of L.A.’s best restaurants (a thing my girlfriend and I have made our “thing”) is expensive; so are nice ingredients, delivery fees and three-day stretches where everything you eat is takeout. I’d probably have way more time, too. When I do cook at home, which is still relatively often, you’ve gotta schlep to the store (10 to 30 minutes), buy all your stuff (30 minutes), take it all home (10 to 30 minutes) and sweat over a stove (1 hour) only to be left with a bunch of dirty pots, pans and dishes that need cleaning (10 to 30 minutes).

So I was intrigued when one of my coworkers brought up the fact that a friend of hers swears by her air fryer — a device that promises that deep-fried taste and texture, minus deep-fried fat and calories that comes with food being submerged in piping hot oil, and at half the cooking time of an oven. I’d previously been aware of the existence of air fryers, but had long ago dismissed them out-of-hand because I couldn’t wrap my mind around something that “fries without oil.” But the meals her friend was producing did look tasty, and after some mental gymnastics, I figured might be better for me, relatively inexpensive to make and take less time than anything I could otherwise make in a pan or in the oven.

Air-Fryer Tip #1: Do not, I repeat, do not try to flip food in your air fryer. You will hurt yourself.

Of course, that’s just scratching the surface of what this thing can do: It also dehydrates, steams, slow-cooks, sautés, bakes, roasts, and of course, broils. Which is to say, I may have overdone it a little.

This (probably) Alton Brown-approved multitasker can hold 6.5 quarts in its bowels, which makes it large enough to air fry a whole chicken, but still small enough that it fit relatively nicely on my countertop at home (for the record, I didn’t air fry a whole chicken). In addition to a bunch of racks, bowls and other accoutrements, the Foodi comes with a handy recipe guide and cooking chart, the utility of which wouldn’t become clear to me until after I both undercooked and burned food to within an inch of its life. Basically, this thing comes straight out of the box ready to do practically everything you want to do in the kitchen, cooking-wise.

But can it do any of those things well?

Air-Fryer Tip #2: If there was one single reason for air fryers to exist, it’s to reheat pizza — takes seconds, comes out perfectly crisped. You’ll never want to nuke a slice in the microwave or wait 10 minutes for the oven to heat up ever again.

The Science: So about that whole “frying” part of the air fryer. Yeah, in case you haven’t heard, that’s what’s called “clever marketing.” Air fryers don’t actually fry anything, because to fry is to cook in hot oil, and an air fryer doesn’t use oil, it uses air. Specifically rapidly moving hot air, a process known as convection, whereby a fan circulates heat more evenly throughout the air fryer, allowing food to cook more evenly and quickly.

If that sounds like a fancy oven, that’s because it is — an air fryer is, at its heart, a compact convection oven. Fancier, sure, but when you see those late-night infomercials and they’re talking about how an air fryer uses “75 percent less oil” than a deep fryer, now you know why: Because it’s baking your food, not frying it!

Air-Fryer Tip #3: Frozen French fries taste great out of this thing. Only problem is, you’re definitely throwing the “healthiness” out the window, since frozen fries have been previously cooked in oil. But really, it’s like eating actual fries.

The Experience: When I unwrapped the Ninja Foodi and placed it on the countertop, I was excited about its potential. I, however, was conveniently forgetting two extremely key pieces of information: First, as I mentioned above, an air fryer isn’t a deep fryer; as much as I wanted it to be, there was absolutely no hope I was going to make a bucket of Extra Crispy™ KFC fried chicken in this thing. Second, and most importantly, as much as I love a delicious meal, I don’t actually like, or really want, fried food — Extra Crispy™ KFC fried chicken included. Information I probably should’ve considered before shelling out the $200 on my new Foodi, and information that would ultimately be my downfall.

This is probably why I found it difficult to decide what to make with my air fryer. After all, fried food is rarely the main event — typically it’s a side, so unless you just looove French fries, you’re probably going to need to make a protein, which you can totally do in an air fryer, it’s just that none of those recipes sounded particularly good. Fish sticks? Taco dogs? Buffalo wings? I’m not sure what I expected, but this wasn’t it.

The first night my girlfriend and I settled on some panko-crusted chicken cutlets and honey-gochujang Brussels sprouts. The Foodi touts itself at being able to cook multiple items at once, stacked, a feature that you really need to take advantage of, as I learned the hard way, if you hope to have all your food hot and ready to eat at once. Problem is, overload this thing and the air can’t circulate as well, leading to unevenly cooked food. In fact, when the machine beeped to announce it was done, we noticed immediately nothing was cooked.

And so, it was only after a few more minutes, a shake of the basket and another few minutes that we pulled out everything. It was a disaster — the chicken was cooked, but there was no color on it, and the meat was rubbery. The Brussels were almost black, but hard as a rock. My girlfriend refused to eat any of it; I choked down both of our Brussels, because at least they tasted good, even if the texture was horrifyingly off. 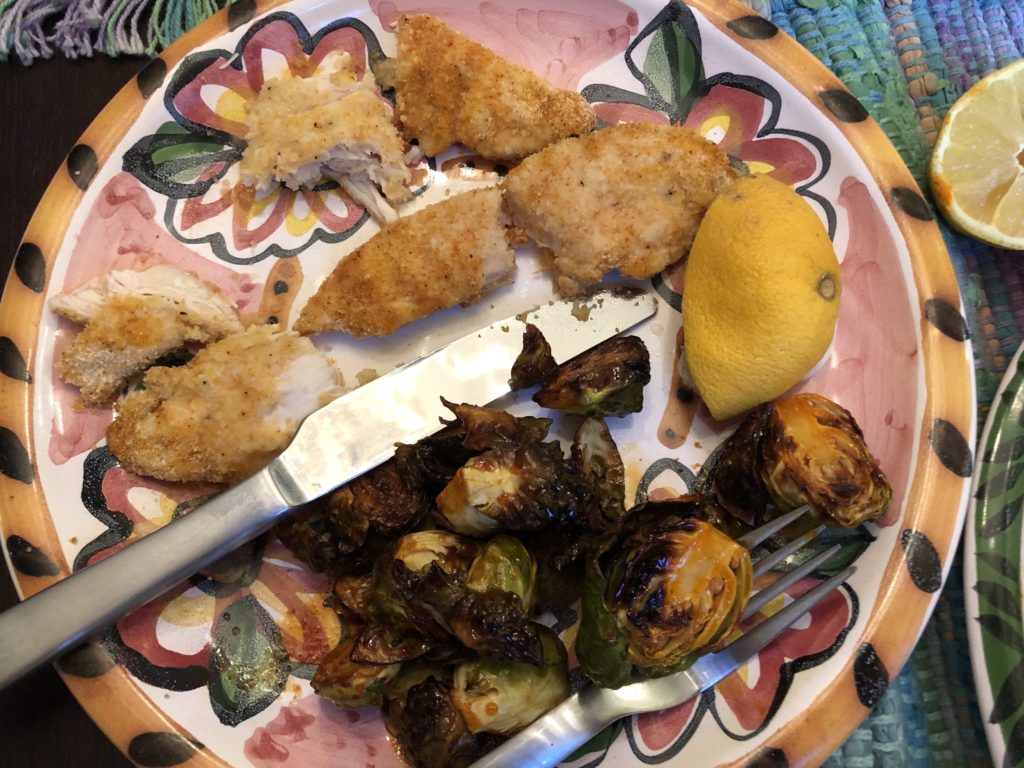 My post-mortem of the night’s myriad disappointments revealed one of air-frying’s other big problems: You cannot trust that a recipe made in, say a Philips Airfryer is going to work in your air fryer — they all cook/work slightly differently, which was why our food came out all janky. This is a problem, because you’re forced to take an already tiny pool of recipes and either discount them completely since they were made in a different unit, or do your best to convert the temps and cook times to yours. It wasn’t until a week later when I had the bright idea to make ginger-soy marinated chicken thighs — literally the one food anyone can make well (considering they’re impossible to fuck up) — that we had anything resembling a proper meal. 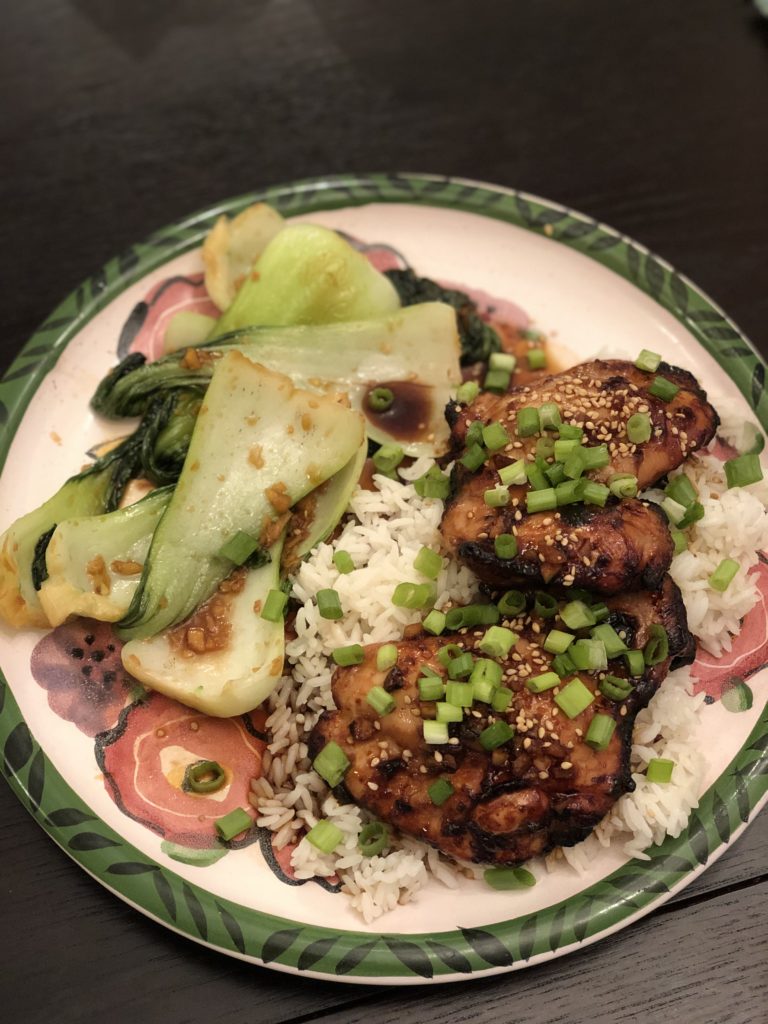 In fairness, once we got the hang of it, food started coming out relatively well. That second week we had some actually quite good cajun-spiced salmon steaks, and because no air-fryer write-up is complete without them, French fries. 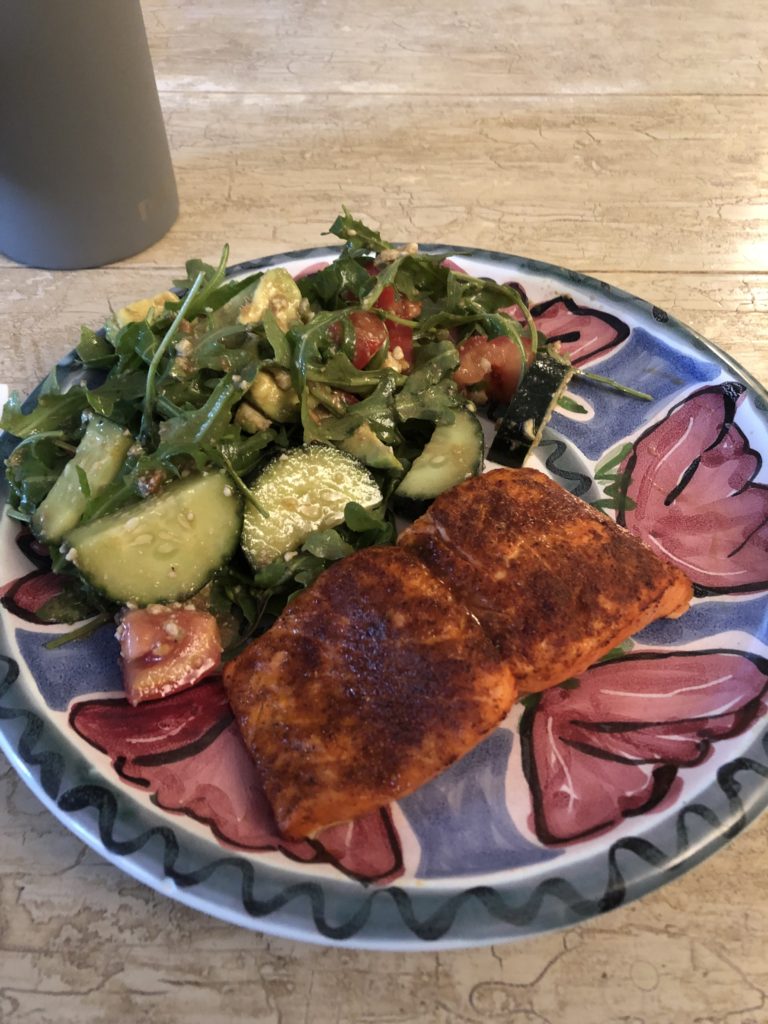 That said, if you think you’re going to air-fry French fries and get actual fry-fries, well, you’re kinda right. Right out of the fryer, these things had crunchy outsides, fluffy insides and tasted pretty good. Unfortunately, if you let them sit for more than a minute, they turn into limp, sad little things. 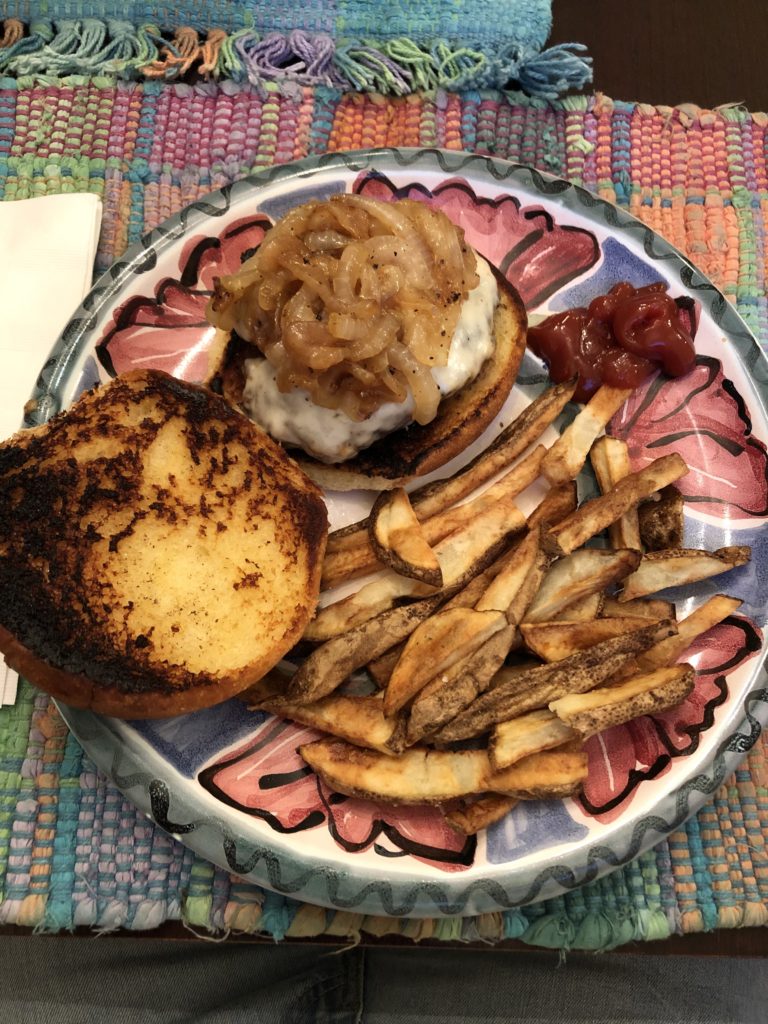 I bought ground beef to make burgers in the air fryer to go with the fries, but when we looked at the recipe and saw that they were going to take 10 minutes to cook (along with 28 for the fries, at a different temperature) we decided to cook them on our cast iron instead, lest we end up eating burgers 30 minutes before we got our fries. So much for speed and easy clean-up.

Air-Fryer Dessert Tip: Donuts are a cinch. Simply cut holes out of Pillsbury Grands and cook at 360 degrees for five minutes. Just make sure to let them cool before you add the icing — otherwise, you’ll have a less-than-aesthetically-pleasing donut and an angry girlfriend. 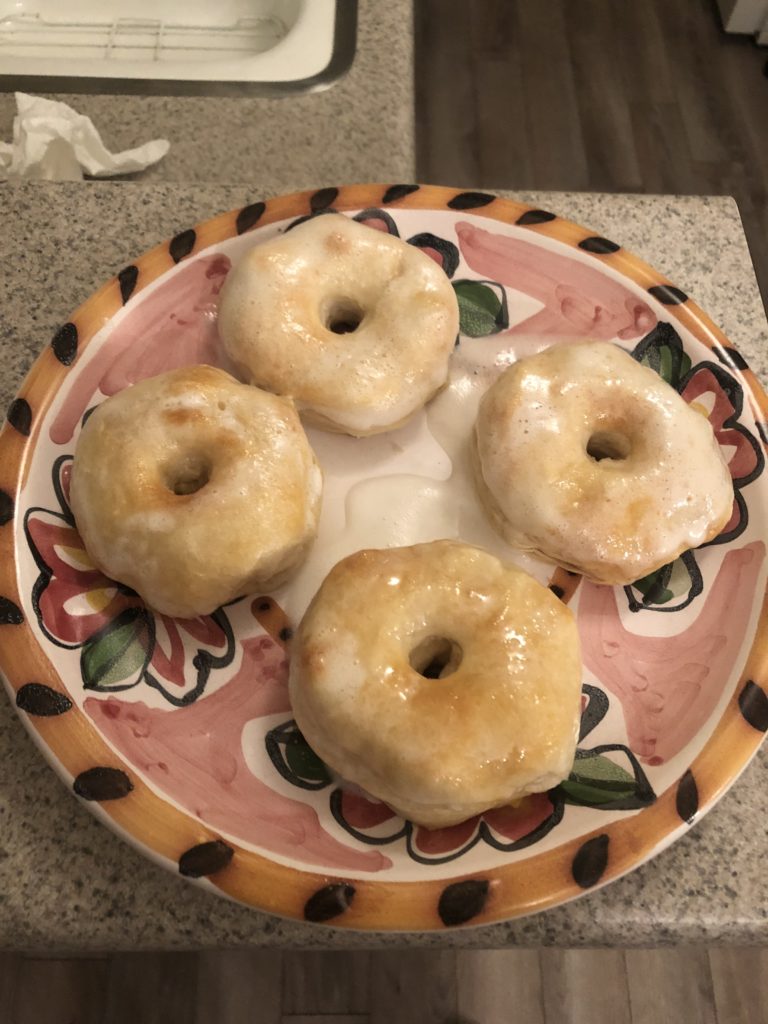 The Takeaway: Look, an air fryer is better than I’ve made it out to be. It really does cook most things faster than an oven, takes up little space, is relatively simple to clean and can make fairly recognizable facsimiles of the less-healthy foods you might want once in a while. But it’s by no stretch the game-changer I wanted it to be. It “fries,” but the food doesn’t taste as good as the real thing; it cooks faster, but the small-ish size means you can’t cook everything at once, all but cancelling out any time you save; the food you can make in it is relatively inexpensive, but you get what you pay for; and it does make “healthier” versions of unhealthy food, but it’s still unhealthy food you’re making (looking at you, Pillsbury Grands donuts). Essentially, the Foodi is a jack-of-all-trades, master of none.

But if I had to put my finger (pun intended) on my least favorite thing about my air fryer, it’s that I burned myself almost every time I used it. Because of the way the air circulates, you often have to open it up and flip and/or shake the food to allow every nook-and-cranny to crisp. Reaching into this thing made me feel like what George Bluth must have felt like when he invented the Cornballer:

Still, we’re going to keep using it, I suspect, which is something. It reheats food extremely well and fast, and that salmon we made was actually healthy and delicious. But it’s not like I’m going to lose 20 pounds eating nothing but fish sticks and “fried” chicken any time soon.