Why are people so goddamn precious about what they eat at weddings?

Given how seriously people take weddings, how hilariously personal they are and how often they go terribly wrong, it’s no surprise that it’s become a cardinal rule that if it’s wedding-related, it’s probably going to get shamed on the internet.

Wedding rings. Wedding dresses. Wedding dates. Inexplicably long and theatrical wedding dances conducted by mediocre and overconfident white men as bizarre mating rituals to woo their new brides. These things have all been roasted, and rightly so. Is there any reason then to think that wedding food would escape the laser-beam of scrutiny?

Hell no there’s not, and Facebook has the wedding shaming groups to prove it. In these groups, which are usually private and gate-kept by moderators, disgruntled wedding guests train their weapons (Sauvignon Blanc-drenched Midwestern women named Katie, mostly) at a near-equal combination of wedding dresses, invites and food. Of these three things, however, it’s the food that seems to garner some of the most impassioned responses.

It’s not hard to see why. Food is a microcosm of class, culture and tradition, and because of this, any attack on it can feel like a personal affront. Not that wedding shamers mind — for the people in groups like these, it seems that the more drama-filled a food shaming is, the better.

Currently, the most popular wedding shaming group is That’s It, I’m Wedding Shaming (Non-Ban Happy Edition), a Facebook community of 95,000 strong whose comments about cakes, menus and spreads can range from mildly spicy to downright vitriolic. 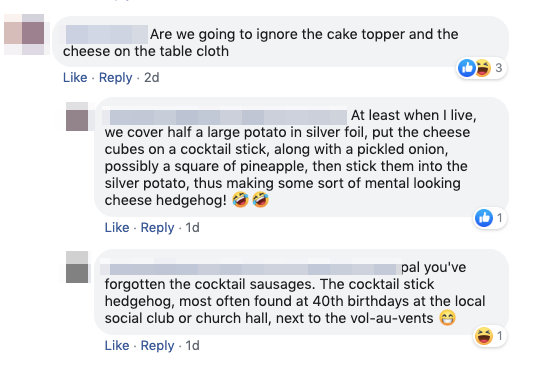 And while members have to acknowledge that these groups are meant for lighthearted fun in order to join, it’s also clear that some people take the word “fun” a little more seriously. That is, for many members, wedding shaming groups like TIIWS are safe spaces to air their dirty laundry and lean into the high drama of weddings, something they can’t necessarily do as well-behaved guests during the ceremony.

Admittedly, some of the comments about food wedding shamers make is warranted. There are certain instances of wedding food that are so objectively terrible that the fact that the couple got away with a few errant comments and not a full-blown court subpoena is surprising. Take, for example, the couple who served dinosaur-shaped turkey nuggets, “potato smilies” and a bunch of beans at their wedding: 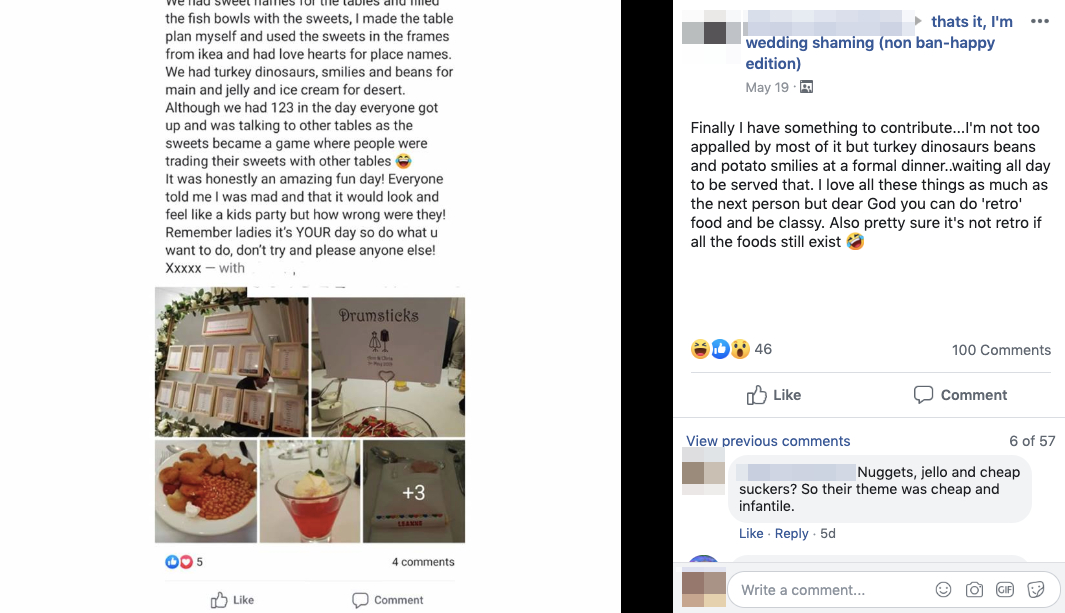 Look, I solemnly swear that no one (NO ONE) loves beans more than I do, but as several commenters pointed out, a little more effort in the food department at this particular wedding would have probably been a good idea. Wedding food is really an extension of gratitude toward guests who may have flown across time and space to be there, and while few people expect Michelin stars at Mike and Michelle’s Michigan Matrimony Moment, food this juvenile is, for some people, a slap in the face. (Though, to be fair, many commenters also said the dino nuggets looked awesome, so to each their own.)

At the same time, other commenters take their food shaming a little too far, straying from the path of understandable criticism into the thorny brambles of extreme — and kinda mean — pettiness: 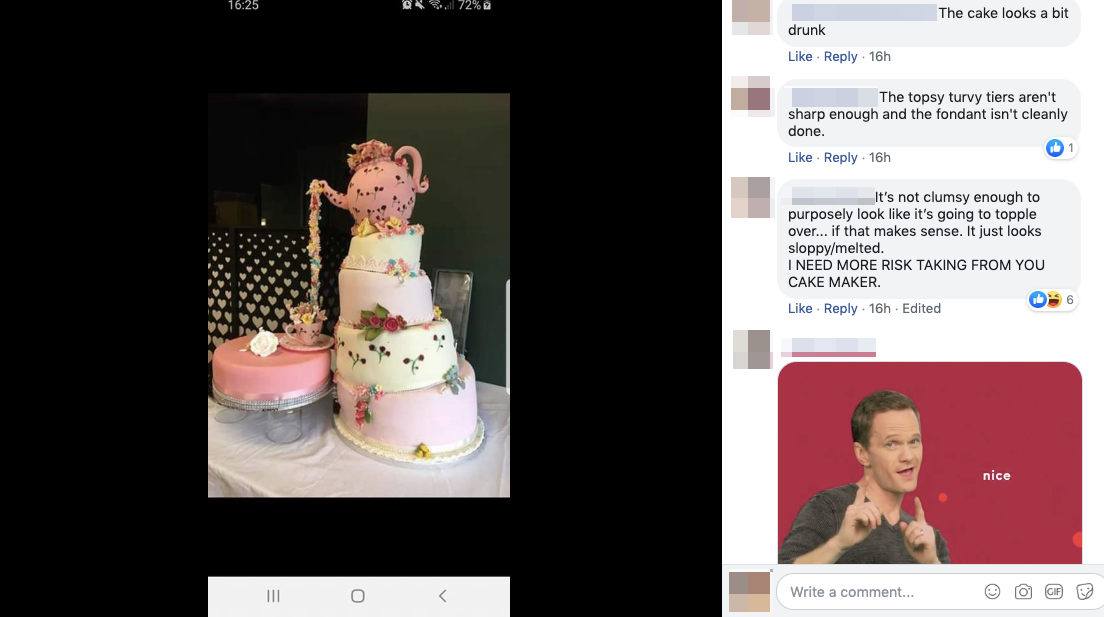 Look at this cake. I mean, just look at it. This cake is earnest. It’s ambitious. It has personality. It tells a story. It even has some semblance of fluid motion, what with the cascading thing coming down from the other thing into the cup area and all. I doubt it’s going to win any Great British Baking Show competitions, but it has an undeniable inner beauty that won my heart.

Nevertheless, the thing got skewered on TIIWS. “Is it supposed to be topsy-turvy?” asks one person. “If it is, then it’s not done crooked enough because right now it just looks like it shifted in delivery instead of being intentional. Probably doesn’t have the proper support system inside. Cute idea though.” Someone else invoked the laws of physics by stating that the teapot wasn’t tilted enough to spill over, and another person simply wrote, “Plain.”

… Plain?! I mean, I wouldn’t call it a perfect 3-D rendering of a whimsical tea experience or anything, but I’ll tell you this much: This work of sugary architecture is exactly one fuck ton better than the basic three-layer cakes most of us have been served at weddings.

However, the teapot cake response was nothing compared to the food-shaming armageddon that went down in April when a photo of an anonymous couple’s “pathetic” wedding spread got posted to an earlier version of TIIWS (now defunct). The spread — which included, but was not limited to, some slices of American cheese, a couple of carrot and celery sticks, a sea of melon blobs, a bunch of quartered oranges and a very modest-looking, homemade chocolate cake — caused what was perhaps the loudest uproar in wedding-food-shaming history, with major news outlets like Fox News and the Daily Mail clamoring to cover the building drama (much of which took place on Twitter).

Not surprisingly, TIIWS wasn’t kind to the couple’s menu. “This makes more sense for toddlers than a wedding, in my humble opinion,” one person wrote. “This looks like a catering spread for work — a low budget one,” wrote another. One guy even came through with the ultimate classist dig: “This is basically what we served at my three-year-old’s birthday party. Except we had quiche and strawberries.”

Other wedding shamers tore into the couple’s willingness to meticulously unwrap and arrange hundreds of slices of cheese, but complained that they “couldn’t be bothered” to take the stickers off the fruit (which, mind you, were on the peel — not the part you eat). Apparently, the couple also had committed the cardinal sin of forgetting to fold the pile of napkins they laid next to the spread, which people got mad about in spite of the fact that, last I checked, American cheese slices and melon chunks are hardly deserving of fine, folded linens.

Thankfully, plenty of people stuck up for the couple by shaming the shamers. Weddings are expensive, they argued. Maybe the couple couldn’t afford pan-seared scallops nestled atop a delicate bed of truffle risotto accompanied by a light dusting of pearl-kissed caviar. Maybe they liked processed cheese and balls du melon: Was that not their God-given right? Plus, aren’t weddings supposed to be celebrations of love, not filet mignon?

In the end, more people sided with the couple than the wedding shamers, but the incident — as well as the existence of wedding-shaming groups in general — brings up an important question: How much do people getting married actually owe their guests? Sure, you want to thank them for making the pilgrimage to see you on your big day, but is it your duty to bankrupt yourself on an ephemeral investment such as food? How contractually obligated are you to provide more than cheese, oranges and “potato smileys”?

Well, given that the average cost of a wedding in the U.S. is $33,931 — roughly $4,200 of which is for catering — the answer to that question depends squarely on what you can afford. If your mom invented jet fuel and you have $20 bills leaking out of your ears, then yeah, splurging on food, or at least putting some thought into the kind that might be enjoyable to eat, is a nice way to honor your guests and give them a positive experience they’ll feel good about (which is clutch, because they probably spent a shit ton of money on flights, hotels and wedding registry gifts to be there).

But if you’re more modestly endowed, it’s up to you to strike a balance between staying within your budget and showing your guests that you appreciate them. As Cooper Fleishman, MEL’s New York Bureau Chief who had to weigh these options at his own recent wedding, says, “The food needs to be great, but it’s not worth spending money on making it outstanding.” After all, people do remember the food they have at weddings, but in the grand scheme of things, the day isn’t really about that — it’s about you and being surrounded and supported by the people you care about.

After talking to a few more people, the general consensus seems to be this: Provided you can afford it, you have some responsibility to drop some dollars to ensure your food is at least mildly impressive enough to satisfy someone who may have flown across the entire country to be there for you. But if you’re not exactly rolling in it and your palate is more Lunchables than lobster tail, then you know what? Your guests can deal with it. In the words of Nick Leftley, another MEL editor, “Anyone who eats a free meal and complains about it is, in my opinion, an unsalvageable dickhole.”