There’s cause for optimism now — but only in moderation

During this morning’s commute, while I waited at a red light on Venice Boulevard, a chipper voice reached me through my open passenger window: “HAPPY IMPEACHMENT DAY!”

I turned to see the driver in the next lane — a fortysomething man in a business casual shirt — grinning from ear to ear. I could dimly hear what sounded like NPR on his radio, reporting the latest developments in the Washington intrigue that appears to have mobilized Democrats in Congress to launch an offensive against the president. “I hope it goes down!” he said, practically laughing. “I’m smiling for the first time in a while.”

His enthusiasm was infectious, and it broke through the general malaise of driving to the office in L.A. traffic. I started smiling, too. “It’s exciting!” I agreed, joking that I was unlikely to get much work done today. He made a gesture as if to say, me neither, and who cares. “I feel like drinking!” he added. The light changed, and he sped away.

Until this week, such optimism was the province of Resistance grifters who have, since before he took office, maniacally tweeted that Trump is bound for prison. Each individual scandal, and each clown-car pileup of related scandals, has convinced them this reckoning is a fait accompli. They’ve put their trust in everything from details of his tax returns to the election-meddling investigation carried out by Special Counsel Robert Mueller (who ultimately declined to say whether Trump had obstructed justice). The more cynical of the commander-in-chief’s critics have instead hewn to the wisdom of a tweet written by podcaster Jesse Farrar back in 2016: 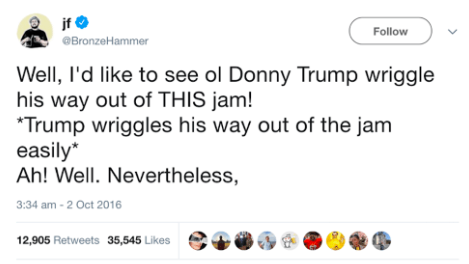 If you never get your hopes up, you can’t be disappointed. In the three years that followed this visionary pre-election joke, the institutions of American government let us down again and again when it came to holding Trump accountable for… well, anything. People retweeted Farrar’s warning whenever we seemed on the cusp of the president’s downfall, and the prediction always held. But as of today, the tweet is no more. Farrar says he “accidentally” deleted it.

Whether this is a meta-goof in light of this week’s headlines or Farrar was simply tired of seeing the original post do the rounds again, the revision aligns with the “seismic change” that allowed Democrats to move forward with an impeachment inquiry. It’s akin to one of the many hairline cracks in a dam that now looks fit to burst — Rudy Giuliani’s increasingly demented TV interviews, the Senate unanimously demanding the release of the whistleblower complaint that triggered new scrutiny of Trump’s dealings with Ukraine, the White House mistakenly sending Democrats their playbook for spinning the affair (and then asking them to disregard the email), the revelation that Ukrainian president Volodymyr Zelensky was unaware that his side of a phone conversation with Trump would be published in the transcript and Trump himself calling House Speaker Nancy Pelosi with the idea of asking her to somehow quash the entire narrative.

These call to mind the Hemingway quip about how to go bankrupt: “Gradually, then suddenly.”

The mistake, as ever, would be to regard what’s now unfolding as a necessarily coherent story — to treat the bombshell of impeachment proceedings as the premiere of a final season of some prestige TV drama. It’s beyond tempting to imagine Trump’s circle rife with betrayals, every villain looking for clean exit as their boss fights a two-front war in 2020, the grinding reelection campaign on one side and the avalanche of subpoenas on the other. But no outcome, even removal, is going to provide a satisfactory conclusion, let alone tie off the billion loose ends you’ve mapped out. If history is a guide, this will be a poorly plotted fucking mess, with most criminals evading punishment. See also: the New York Times publishing an anti-impeachment op-ed by John Yoo, an author of the infamous memos that sought to justify torture of detainees in the War on Terror under George W. Bush, as soon as the Dems formally took aim at Trump.

Just the same, these are days to remember — not as the prelude to a “final” act, only a moment of light behind the clouds. Whether or not the president wriggles his way out of this jam, we have broken through the fatalist assumption that he is indestructible, and that alone is a dear shred of hope. The tricky thing will be using that buoyancy to continue pressuring the representatives and senators who took this long to get serious. There is good cheer in the air as Trump begins to stumble sharply (I imagine by the time you read this, we’ll have seen a few more gobsmacking examples), yet if we grow complacent from it, this will be as far as we go. The victories along the way should be celebrated, especially insofar as our morale will crush any left in the West Wing, but confidence must not undermine the effort. That’s what the Resistance crowd has been selling all along: Blind, stupid faith in America’s self-correction.

So as far as impeachment fever goes? We don’t need a cure, exactly. We ought to run a little hot. And I’m still smiling because a stranger in traffic was eager to share his exuberance after months of downward spiral. But this newfound momentum won’t magically sustain without a measure of cold reality. Keep your eyes forward, feet on the ground. Now comes the hard part.