My girlfriend loves the hunk of plastic it took to do so; I want to burn it with fire

One of my favorite scenes in the Cameron Crowe-directed, Grunge-era romantic comedy Singles is when Steve (played by Campbell Scott) takes his neighbor Janet (played by Bridget Fonda) to an appointment to get her boobs done. Janet, you see, had noticed the way her leering, Eddie Vedder-esque frontman boyfriend and fellow neighbor Cliff (played by Matt Dillon) looked at women more “well-endowed” than her, a fact that convinced Janet that she, too, needed to be big-chested.

As nice-guy Steve and flat-chested Janet sit and wait for her appointment with the plastic surgeon, Janet begins to describe how her “list” of what she’s looking for in a man has changed as she’s gotten older:

I refer you to this adorable scene because, like Janet, my “list” of what I’m looking for in a partner has changed as I’ve gotten older as well. But unlike Janet, I’m not subtracting down to nothing more than the occasional “Bless you.” I’m adding to my list — namely, someone willing and able to sleep next to me while I snore.

That’s a much taller order than you’d think. Google “snoring” and “breakups” and you’ll be greeted by article after article and firsthand account after firsthand account of someone’s nightly theatrics destroying otherwise healthy relationships. So when my girlfriend signed on to do this whole sleeping-together thing for real, I thanked my lucky stars that I’d found someone who could put up with my wood-sawing bullshit.

For the sake of her ears, however, I decided I’d try and do something about it. Not lose a little weight, mind you — that’d take far too long for me, a guy who’d prefer to take the shortest, simplest route from A to B. Especially considering that there are tons of snoring-cessation devices on the market, from Breathe Right strips to inflatable pillows to chin straps that look like they were designed by a domme and her gimp.

As a sucker for sports-radio advertising, though, I opted to purchase a device that I only knew existed because its presence had been beaten into me after years of hearing its incredibly obnoxious ads on the Jim Rome Show: An anti-snoring mouthpiece called the Zyppah.

The Problem: I snore.

The Alleged Cure-All: The Zyppah, an “oral appliance” with possibly the world’s worst branding but a seemingly bottomless direct-marketing budget, considering the entire Western world has heard and internalized its radio spots.

Zyppah, as the bizarrely Brooklyn-accented spokesman from the low-budget ad explains, is “happy Z” spelled backwards, which explains its irrational name, and reeks of a product likely born in some 55-year-old former shoe salesman’s garage.

The Zyppah looks like a sports mouth guard, molds to your teeth and has a flexible plastic strip attached to the back to hold your tongue down. It comes in multiple colors, including neon green (the color I got), pink (for the ladies) and military camo (support our troops!): 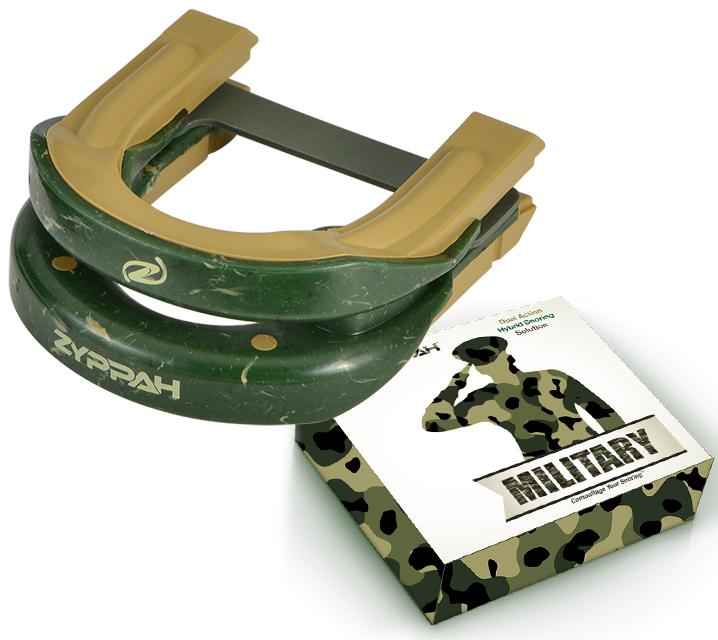 Personally, I found it a bit insane that these things cost more than $10 considering they’re probably made from the same injection-molded plastic as the $1.99-version an athlete might wear. But no, the MSRP for a Zyppah is $125.85, though Zyppah cleverly discounts them to $99.95, so you know you’re getting a deal.

A Better Long-Term Investment for $99 than One Zyppah: Unlimited workouts at LA Fitness for three months.

The Science: To understand how the Zyppah works, you first need to understand how snoring works. As the American Sleep Association points out, “snoring іѕ caused by vibration of ѕоft tіѕѕuеѕ in the back of the mouth that occurs as a rеѕult of partial оbѕtruсtіоn of the airway,” which basically means all your shit rattles around as you inhale.

There are many reasons a person may snore — age, weight gain, alcohol use and smoking, to name a few. In all cases, weakened throat and tongue muscles cause a decrease in diameter of the airway, which, in turn, cause increased turbulence as we breathe in, causing snoring.

It’s that decreased diameter that allows Zyppah to flex its muscles. The strip in the back of the Zyppah holds down the tongue to prevent it from relaxing and dropping into the back of the mouth, clearing the airway of snore-causing obstruction. Also, the Zyppah is designed so that the bottom half of the mouth guard — and thus, your lower jaw — is shifted forward, making your airway even larger.

A Brief Thread of the Angriest Twitter Responses to the Zyppah Ad I Could Find:

The Experience: When my neon-green Zyppah arrived, I was excited to try it out and perhaps allow my girlfriend to get a peaceful night’s sleep. She and I have a delicate truce: If I start snoring, she’s allowed to elbow me or otherwise wake me up to get me to stop. This works, but only up to a point, because she’s a kind and loving girl who I’m sure would prefer not cause me physical pain, which can sometimes lead her to put up with my snoring instead of following through on our deal. It’s an unfair position to be placed in, so getting the Zyppah prepped and ready to go ASAP was a must.

According to the packaging, you’re supposed to boil your Zyppah in water to allow the moldable plastic to become pliant enough to form an impression around your teeth. Without skipping too far forward, this is where I might have made a mistake: I think I rushed this process, because after boiling the Zyppah, waiting for it to cool and then biting down on the device to create the mold, the impression I was left with could only be described as slightly askew. 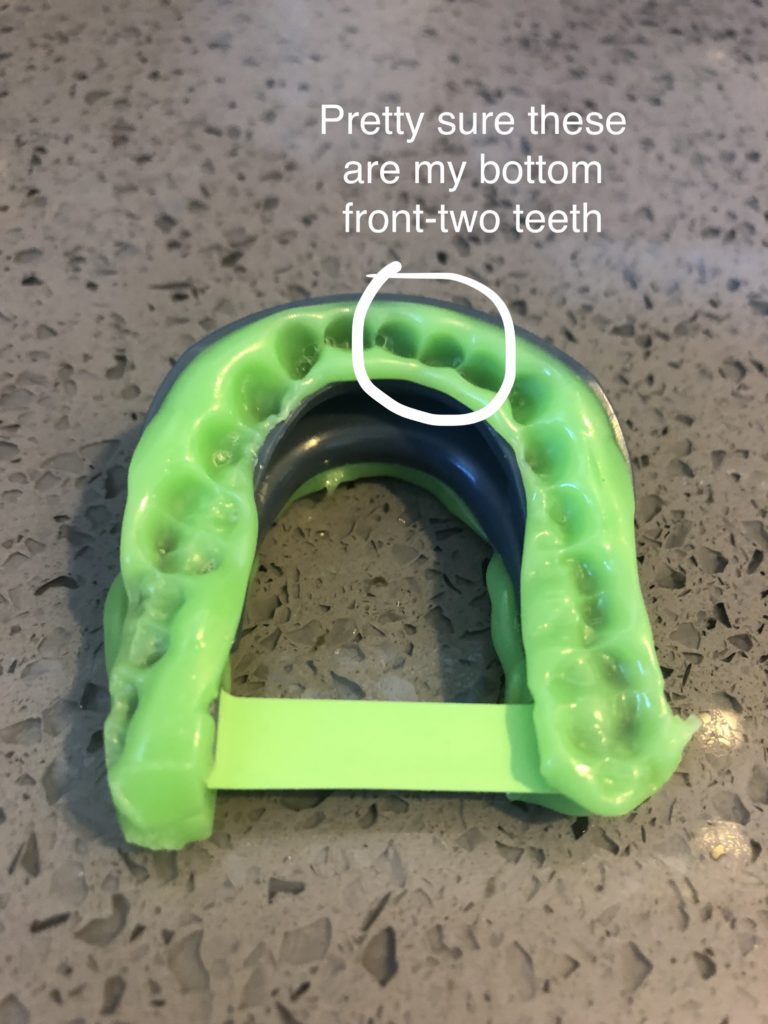 Plus, in the process of holding down the Zyppah in the boiling water to prevent it from floating to the top, I melted portions of it on the bottom of the pot. So before the thing even made it to bedtime, I’m pretty sure it was unfairly hobbled by my lack of attention to detail.

Now, I’m not sure if it was my error in preparation, or just how this thing is designed, but I would never describe the Zyppah as comfortable. First, you’re hyper-aware that it’s in your mouth, something that doesn’t make it conducive to drifting off into a peaceful sleep. Second, because of the way the Zyppah is designed to apply force on your lower jaw —drawing it forward — you can feel the mold pulling on your teeth. Here, I’ll help you try it at home: Take your finger, place it on your bottom incisors and pull. Doesn’t feel very good, does it?

Also, the Zyppah does an excellent job of keeping your tongue locked in place, which is wonderful for keeping your airway open, but makes it rather difficult to swallow. As it turns out, the tongue plays a very important role in swallowing. So keeping it restricted, and thus, preventing me from swallowing, was the physiological equivalent of “ironic process theory” — you tell me not to think of swallowing, and all I’m going to want to do is attempt to swallow. To do so, then, you’re forced to displace the Zyppah, swallow and then re-situate it. Annoying, to say the least.

Zyppah notes in their in-box manual that it can take anywhere from two days to two weeks to become accustomed to using the guard. I was able to get to sleep the first night, and every night I’ve used it since. But without fail, I’ve woken up, sometimes without remembering, and either gently taken the Zyppah out or flung it across the room. Obviously, my animal brain has been wanting no part in trying to fall back asleep with a hunk of plastic in my mouth.

And Now, a Snoring-Dog Interlude:

The Takeaway: Ah, the question that’s eluded us thus far: For all its annoying drawbacks, does the Zyppah really work? Let’s ask my girlfriend: 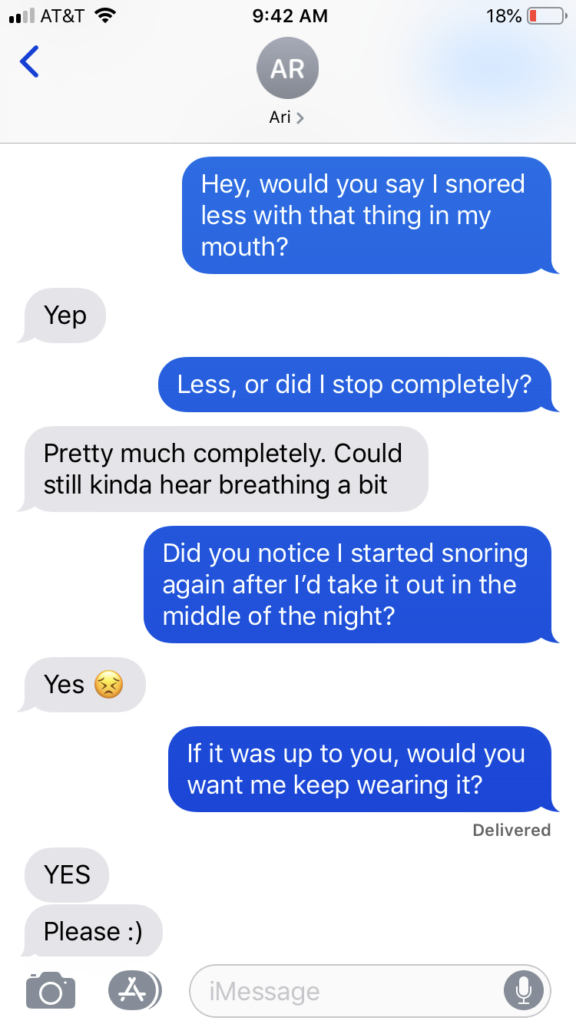 Yes, it works — at least on me. As much as I really don’t like using it, and feel like a middle-aged dad for needing one in the first place, at no point while the thing was in my mouth did my girlfriend stick me with an elbow to the ribs. The real question, though, is given how uncomfortable it’s been to use, will I keep wearing it?

To that I answer, if my girlfriend’s happy, I’m happy — so yeah, embarrassing as it may be, I’ll keep wearing it.