Obsessed with saving gas, these dudes practice techniques that may be great for the environment — but manage to piss everyone else off

Zach, a 26-year-old software engineer from Ohio, employs a few techniques to make his fuel go as far as possible. “I limit climate-control use, watch walk signs so I can better predict if I should coast to a stop instead of maintaining speed or accelerating and try to keep the car in electric-only mode as much as possible,” he explains. Zach, who drives a Toyota Prius C, says these strategies make him “hypermiler-adjacent.” But compared to others in the hypermiling community, he’s a mere dabbler: “I’ve seen that people will have OBD II MPG monitors and fold in their sideview mirrors, and well, I don’t do that — I just try to be really aware of my fuel economy while driving.”

Hypermiling is the simple act of driving a vehicle in the most fuel-efficient way possible. Wayne Gerdes, who coined the term, says that when you beat the EPA’s highway rating, “that’s hypermiling.” But as Zach notes, there are hardcore enthusiasts who take it much more seriously than he does, and who have become obsessive about wringing every last bit of juice from their fuel tanks. “I’ve heard of people doing it almost recreationally, shooting for high scores,” he tells me. “They drive in as controlled an environment as possible just to see how far they can go with as little fuel as possible.”

The fuel-economy challenges Zach mentions are real and numerous. Some are large, collective events, like the oddly nationalistic Craig Vetter Fuel Economy Challenge of the 1980s; others function as sponsored content for manufacturers like Honda and Audi. “Today we’re the lead car in a line of furious and confused Arizona motorists, who we assume cannot fathom why this Audi with its hazards on refuses to accelerate past 45 mph except when going downhill,” Automobile magazine reports. “It’s unlikely they’d be any less angry if they knew the reason for our plodding obstinacy — that a bunch of sweaty, stubborn journalists are engaged in a fuel-economy challenge, attempting to drive 834 miles from Albuquerque, New Mexico, to San Diego, California, on a single tank of fuel” — a journey that should require a refuel after 567 miles, according to the EPA rating.

These ultra committed and competitive hypermilers have built thriving communities, both online and off. There are dedicated subreddits, informational websites like Ecomodder and CleanMPG and even rudimentary memes. Here, they trade and endlessly debate tips on how to reduce fuel consumption. Some are rote and relatively uncontroversial — the stuff a frugal dad would tell his kid during a driving lesson — while others are more niche. “Mileage is part of the reason I drive a manual car, and a big thing I do is try to shift up ASAP so I don’t rev the engine too much,” says Em, a 22-year-old student from Minnesota. “I also don’t use the AC almost ever, except on the highway where I’m told cracking the windows creates a lot of drag. I also make sure I’m not carrying stuff in my car I don’t need. Plus, I’m pretty vigilant about keeping the tires inflated.” 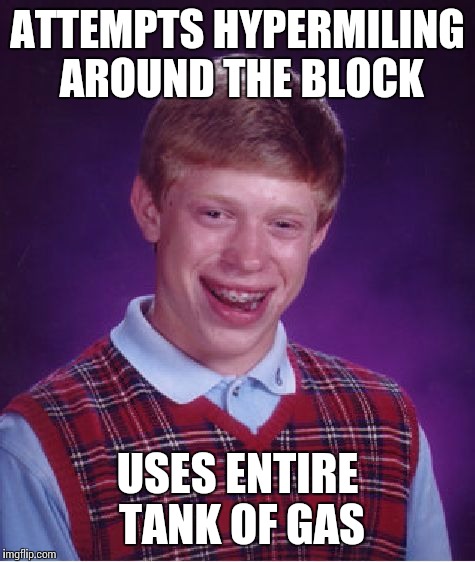 Katherine, a 41-year-old psychotherapist in L.A., says her “primary techniques” are “using cruise control all the time, planning routes with fewer stop signs and traffic lights, having the car empty, using the lowest viscosity oil allowed for the vehicle and constantly checking tire pressure and tread.” Stopping as little as often is crucial to not wasting fuel, which led Mr. Money Mustache, the influential and totally batshit early retirement guru, to coin the hypermiling rhyme, “If you have to brake, you’ve made a mistake.” Katherine also drives a manual, which she tells me is controversial in hypermiling, and “drafts,” i.e., she follows behind larger vehicles to drive in the wake of disrupted, lower-density air that follows them, which is “more aerodynamically efficient than bulling through still air.”

Drafting is among a number of hypermiling techniques that can be dangerous and annoying to other road users, and hypermilers are often acutely aware that their style of driving puts them at odds with regular drivers, as the Automobile report suggests (it makes repeated reference to “two livid blond women behind us in a lime green Kia Soul, gesturing wildly”).

From the vantage point of a hypermiler, though, regular drivers are hurried and inefficient, and so, the irritation cuts both ways. “Coasting can can be frustrating and difficult if other drivers keep cutting in front of you,” cautions the WikiHow page on hypermiling, and Liz, a 30-year-old assistant from L.A., tells me that she’s unfairly maligned for coasting to traffic lights when she sees the light turn yellow. “Other drivers seem to want to go as fast as possible at all times, so if I start slowing down a ways back from the light, people lay on their horns despite there being no way for me to actually get them where they’re going faster,” she says, adding that she wishes her fellow drivers knew about hypermiling techniques. “Let’s talk about it so people stop fucking honking at me to hurry up to red lights!”

Zach agrees. “I find that the act of considering my efficiency while driving leads me to be more relaxed,” he tells me. “You don’t whip around someone that’s pissing you off if you’re thinking, ‘Well, that’s kind of a dumb use of gas.’”

For all of these reasons, there’s a general reluctance to identify as a hypermiler, with people preferring to avoid the label even if they practice most or all of the techniques. Some tell me they weren’t even aware of the term, including Liz, who says she Googled it during our conversation. Others seem embarrassed about the irritation hypermilers cause other road users, and well, the general unsexiness of the hobby. Mr. Money Mustache once called hypermiling “an entirely new sub-field in the Online Nerd community” and Automobile says it’s a “woefully boring” and “monotonous” way of driving (“Maybe it’s an ego thing, but you can only be passed by so many Winnebagos before you feel like you’re going insane”). None of which makes it sound thrilling or cool.

There’s also potentially some embarrassment about admitting the motivations for hypermiling, which tend to be frugality (hence, the interest by Mr. Money Mustache); earnest concern for the environment; and an obsessive interest in maximizing efficiency through hacks and number-crunching. “I’d say it’s mostly being a tree-hugger, but also being a huge cheapskate,” Adam, a 33-year-old truck driver from Ohio, tells me when I ask him his reasons for hypermiling. “And I’d be lying if I said there wasn’t a little bit of being competitive just for the sake of it, too.” All of these motivations leave hypermilers open to mockery, and for the men among them, it risks having their masculinity questioned.

Despite the scorn hypermiling invites, my sources remain committed to the techniques — often for ethical reasons. “I’ve always liked cars, but I’ve also always been conscious of the negative side effects, like climate change and hundreds of thousands of deaths on the roads,” Adam tells me.

“Ultimately, it’s about being a thoughtful consumer of any resource,” Zach adds. “So if I’m going to have a car instead of biking around town or whatever, I feel a responsibility to do it thoughtfully.”

Why not just get rid of their cars altogether? For many hypermilers, especially those in cities with little public transport, it’s just not feasible to abandon them, even though they’d love to. “My therapist reminds me I cannot align with all of my values 100 percent of the time,” Zach tells me. “So the hypermiling, the electric car, they’re compromises I’ve made with myself. To opt-out of a car would mean a much lower standard of living for myself, so I’m trying to at least minimize their impact.”