Just How Old Is That Frozen Pizza You’re Eating?

Ranking frozen pizzas by how long they last, in case a possible frozen pizza shortage threatens our very existence

Obviously, the right thing to do about this is to react calmly and not hoard shit, but the prospect of a frozen pizza shortage turned my panic meter way the fuck up, so I wanted to find out which frozen pizza is best for hoarding. To do that, I couldn’t just look at expiration dates — I also need to know when they were made. That way, I could determine which ones last the longest from date of creation until date of expiration — or more simply, which have the longest shelf life.

At first, I figured that no frozen pizza company would tell me when their product was made. After all, who wants to tell the public that their frozen pizza was assembled sometime during the Reagan administration? But as it turns out, pretty much every frozen pizza company is totally transparent about this, and all I had to do was call them and ask how to decode the production date from that little string of numbers near the expiration date. Each has their own system, and each pizza lasts a different amount of time, but in case you’re curious about how old your pizza is, or you’re freaking the fuck out over a shortage, too, here’s how to decode just when that pizza in your freezer was made, from the longest-lasting frozen pizza to the shortest-lasting.

1) Newman’s Own — 12 months. I would have figured, with its reputation for fresh ingredients, that Newman’s Own would have a shorter shelf life than the competition, but much like the actor for which the brand is named, Newman’s Own frozen pizza stays fresh and relevant well into its old age. When I called Newman’s Own on the phone, they informed me that their frozen pizzas were all made one year before their expiration date, so, for the picture below, this pizza would have been made on March 25, 2020. At a full year of freshness, Newman’s far outlasts most of the competition, making it the best pizza for hoarding. Paul Newman would be proud. 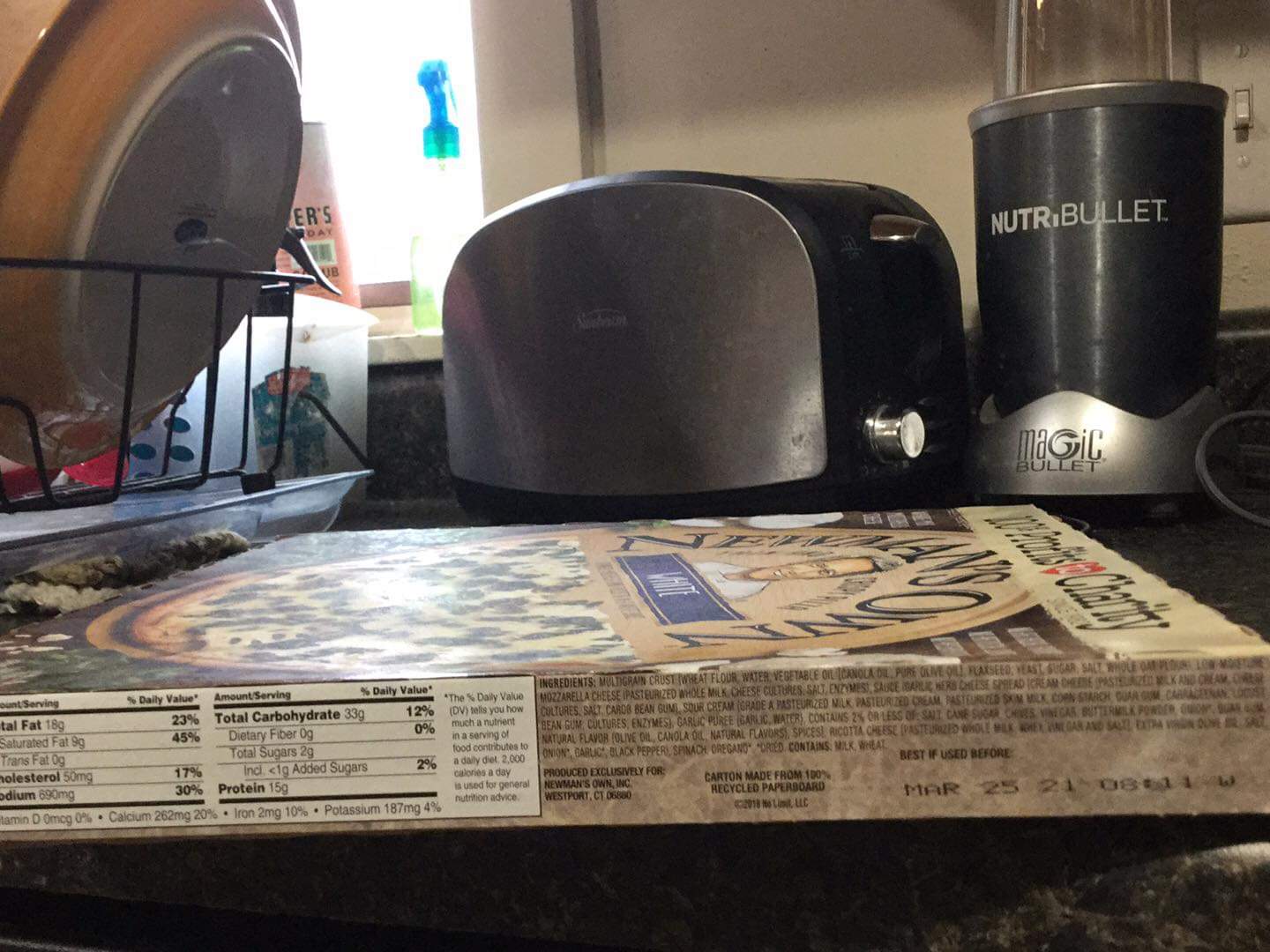 2) Caulipower — 11 months (probably). Okay, so I tried to include a healthy option in here, even though I abhor cauliflower pizza, which I discovered during my recent journey of eating 40 pizzas in 30 days. The problem is that the folks at Caulipower Pizza didn’t know when their product was made, so I’m forced to guess at this one. A friend of mine had the pizza below in her freezer, and she’d only bought it a week or so ago. While I originally thought frozen pizzas were years old, I’ve discovered that most end up on the shelves pretty quickly after production, so, since my friend bought the pizza in April 2020 and it’s good until March 2021, I’m going to guess it lasts 11 months from production, giving it the second best slot, even though cauliflower pizza is gross and no one should hoard it or eat it ever. 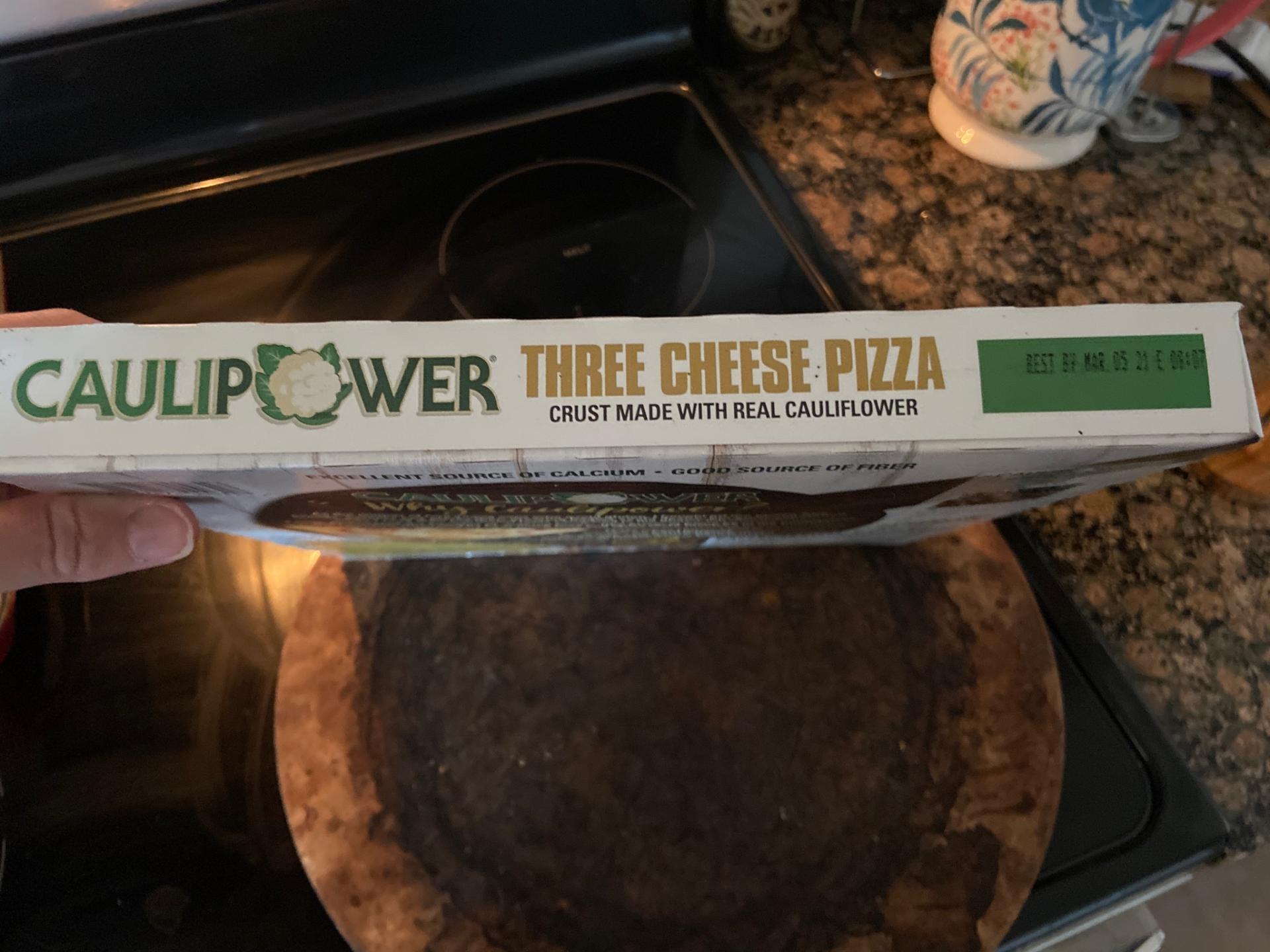 3) Ellio’s — 9.5 Months (I think). Ellio’s pizza isn’t even a top brand anymore, but I used to eat this shitty frozen pie all the time as a kid, so I include it here as a courtesy. If you’re unfamiliar with it, Ellio’s provides the stale taste of lunchroom pizza but in your home, and as a little kid watching my endless loop of Teenage Mutant Ninja Turtles cartoons, I couldn’t get enough of this stuff.

But the lady on the phone for Ellio’s was incredibly suspicious of my call. I’d told her that it was just a general inquiry, and that I just like to know when my food is made, but she asked me, “Why do you need to know that information?” and also said “I don’t think we share that information with the public.” It’s worth noting that no other pizza company reacted this way.

Anyway, from what I learned from other calls, I think that code below the expiration date — “30012051” — means it was made on January 12, 2020, which means it lasts nine and a half months until its expiration date. If you want to know how I got that number, keep reading. 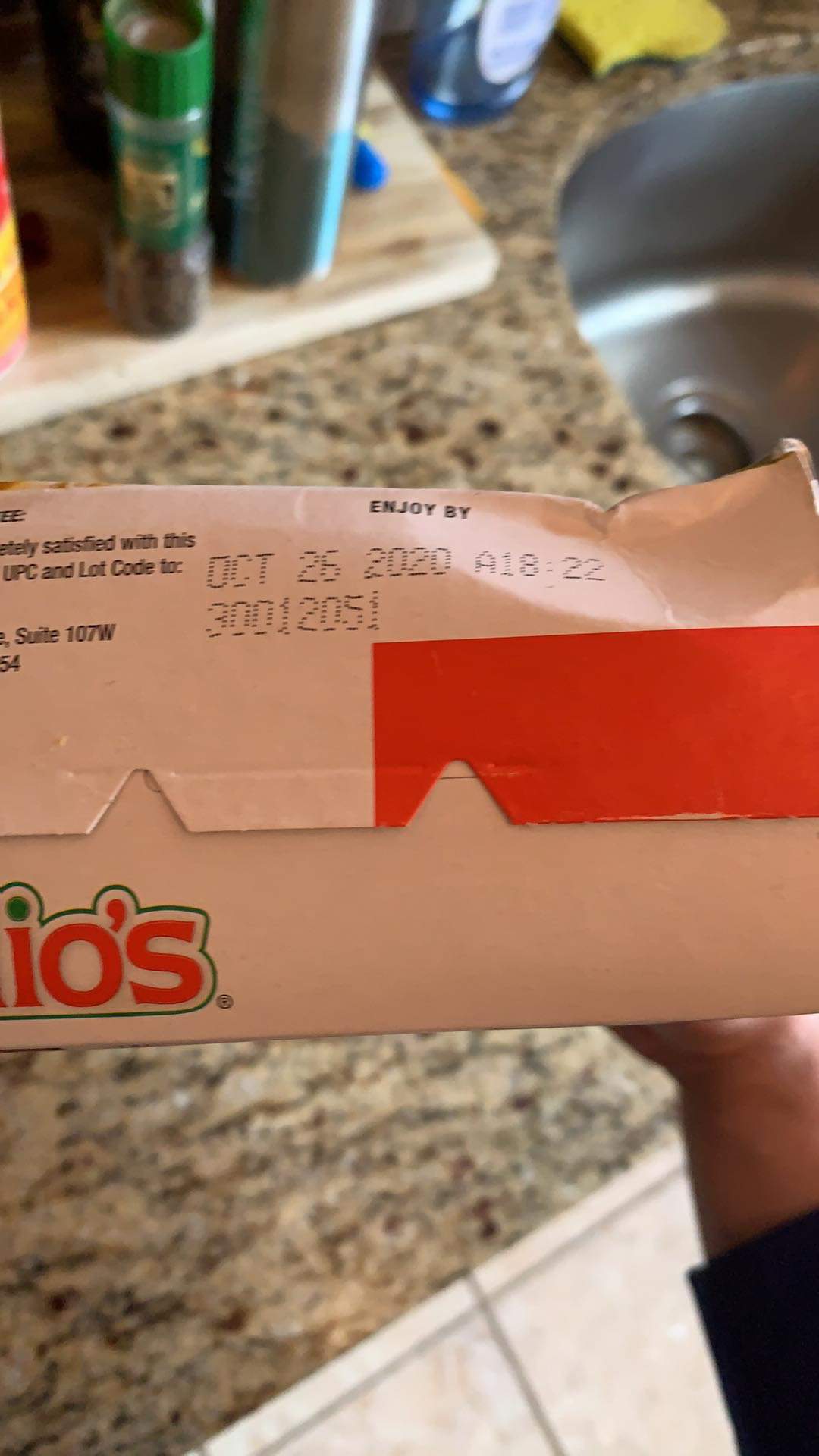 4a) DiGiorno — 9 months. Given that they’re the top-selling frozen pizza brand, I called DiGiorno first, and they were happy to explain to me how to decode when their product was made. While most of the numbers below the expiration date have to do with which factory the product was made in, the first four numbers tell you when it was made. On this box, the first four numbers in that code are “0085.” The first number in that code tells you the last digit of the year it was made, which means this was made in the year 2020. The next three numbers tell you the day of the year it was made, from January 1 (which would be 001) to December 31 (which would be 366). This one has “085,” which would be March 25th of 2020, meaning DiGiorno’s stay good for nine months. 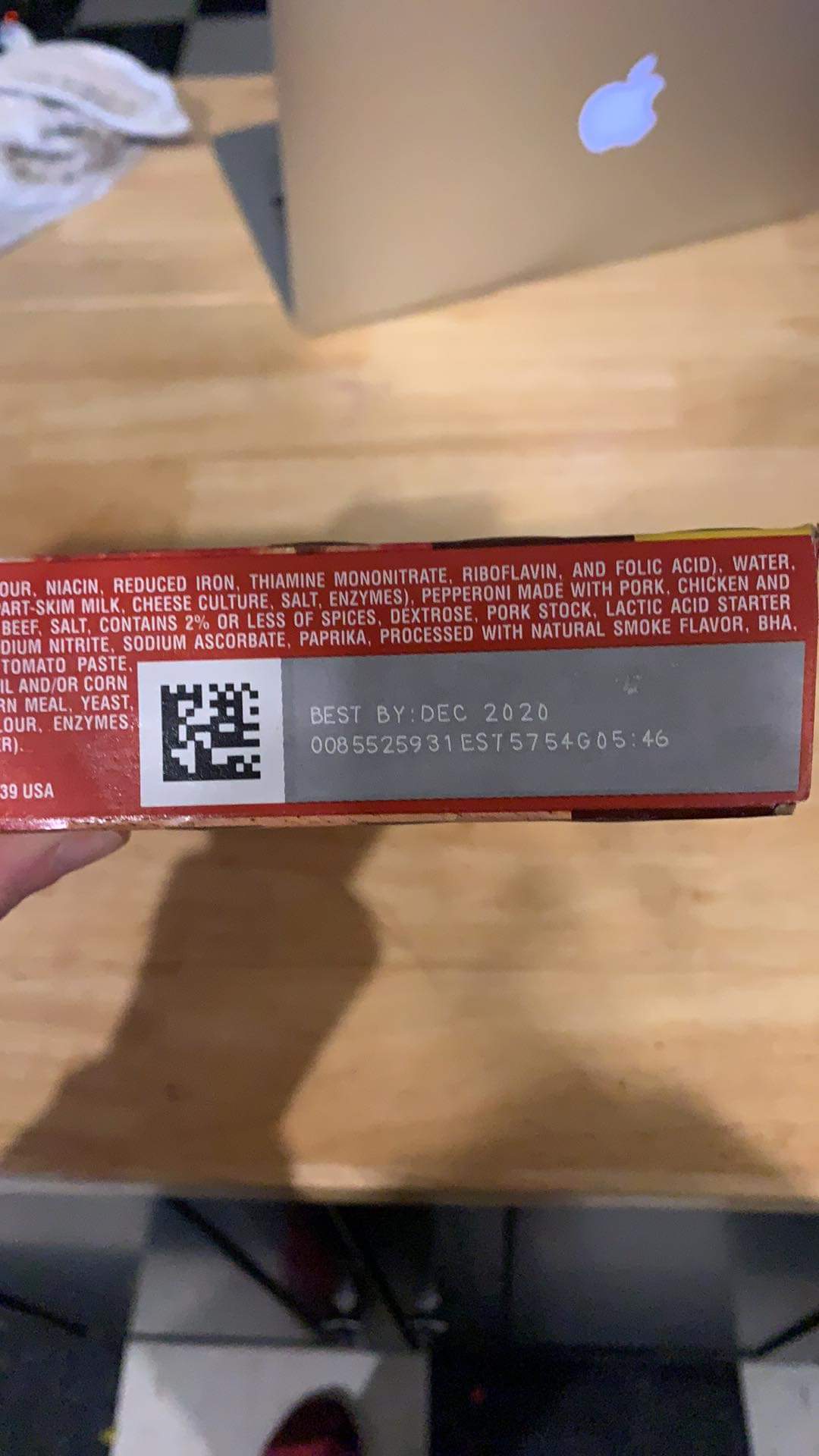 4b) California Pizza Kitchen —  9 months. In the interest of journalistic integrity, I must tell you that when I called California Pizza Kitchen, they offered to send me coupons for pizza and I didn’t refuse. After all, we may be facing a shortage and I’m a weak, pizza-loving man, so I couldn’t say no. I hope you still can trust my words here, because I promise to not let these pizza coupons sway my opinion of this brand.

Anyway, it turns out that California Pizza Kitchen has the same code as DiGiorno, which makes sense because the same company (Nestlé) makes both brands. So, since the first four numbers here are 9337, that means it was made in the year 2019 and on the 337th day of that year, which was December 3rd. And so, whenever I use my morally questionable coupons, my CPK pizzas will last for nine months after they were made. 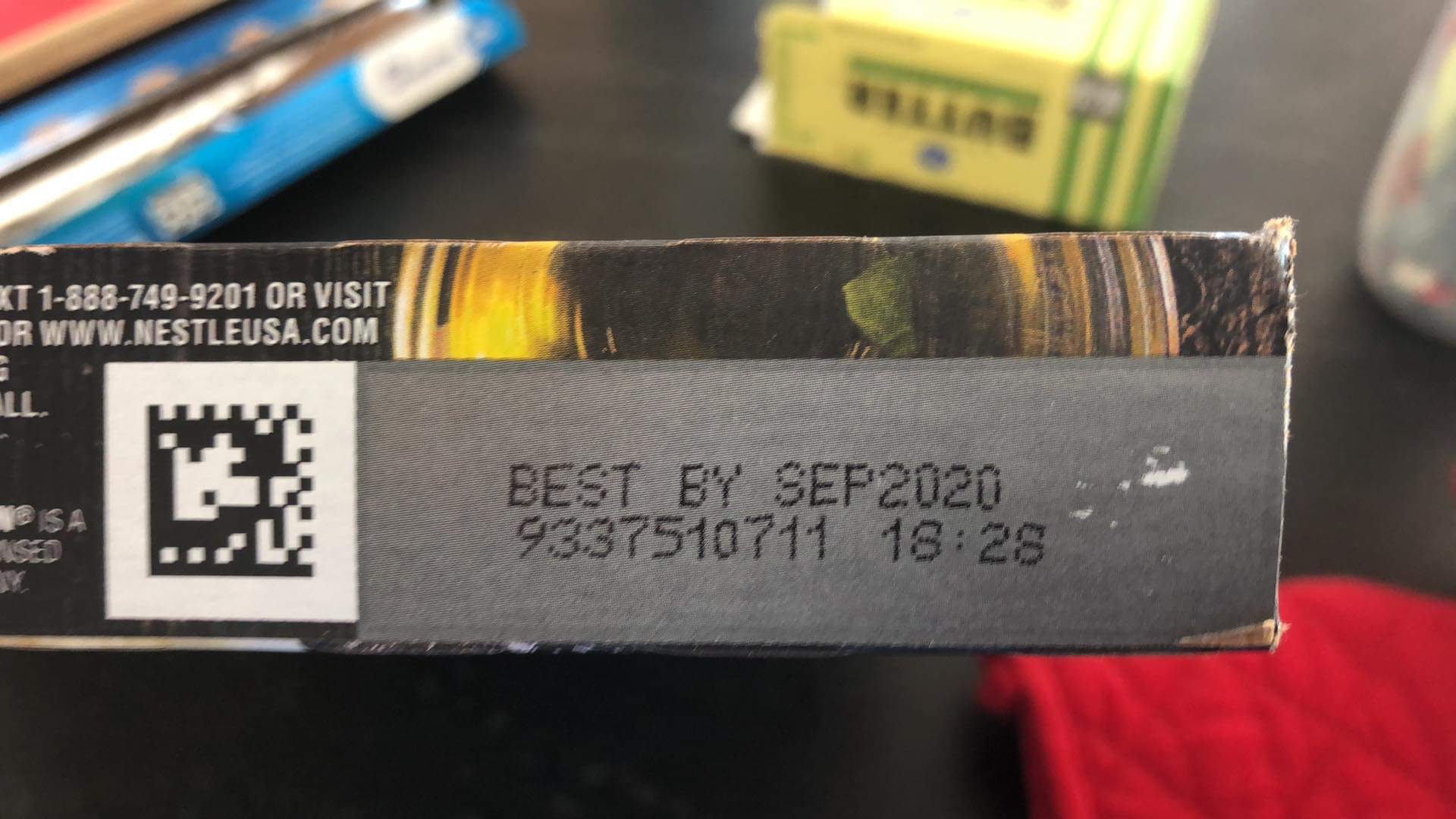 4c) Tombstone — 9 months (or 16 months, but it’s probably 9 months). I ended up calling Tombstone last and I’m pretty sure the person on the phone gave me some false information. Some of the customer service people were prepared for my question, but Tombstone wasn’t, which is totally forgivable. After waiting on hold for almost 10 minutes, the representative returned and explained to me that the code near the expiration date went by a “Julian calendar” just like the DiGiorno people said, but then she told me that it was made in August of 2019. This would mean that Tombstone pizzas last 16 months, which is far longer than every other brand, so I’m pretty sure that she just decoded it incorrectly, and that the pizza was really made on March 28, 2020 (as translated from 0087 in the production code). 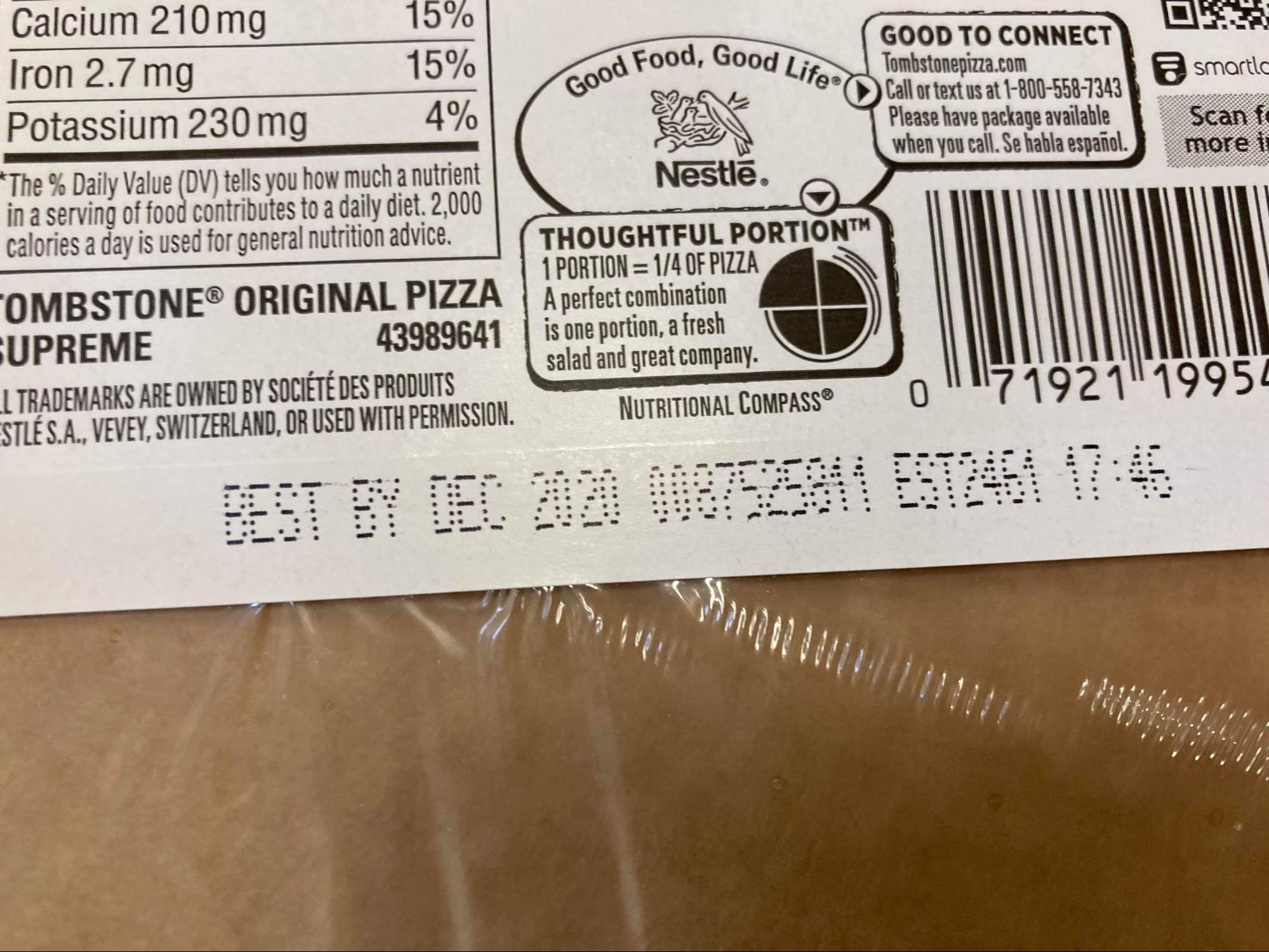 7) Tony’s — 7 months. For Tony’s pizza, the way to decode the production date is the same as the DiGiorno, but the first two numbers in the code refer to the plant they were made in, and then the next four numbers denote the production date. So, ignoring the “31” here, the number “0112” translates to April 21, 2020, which means Tony’s pizza lasts just seven months after production. 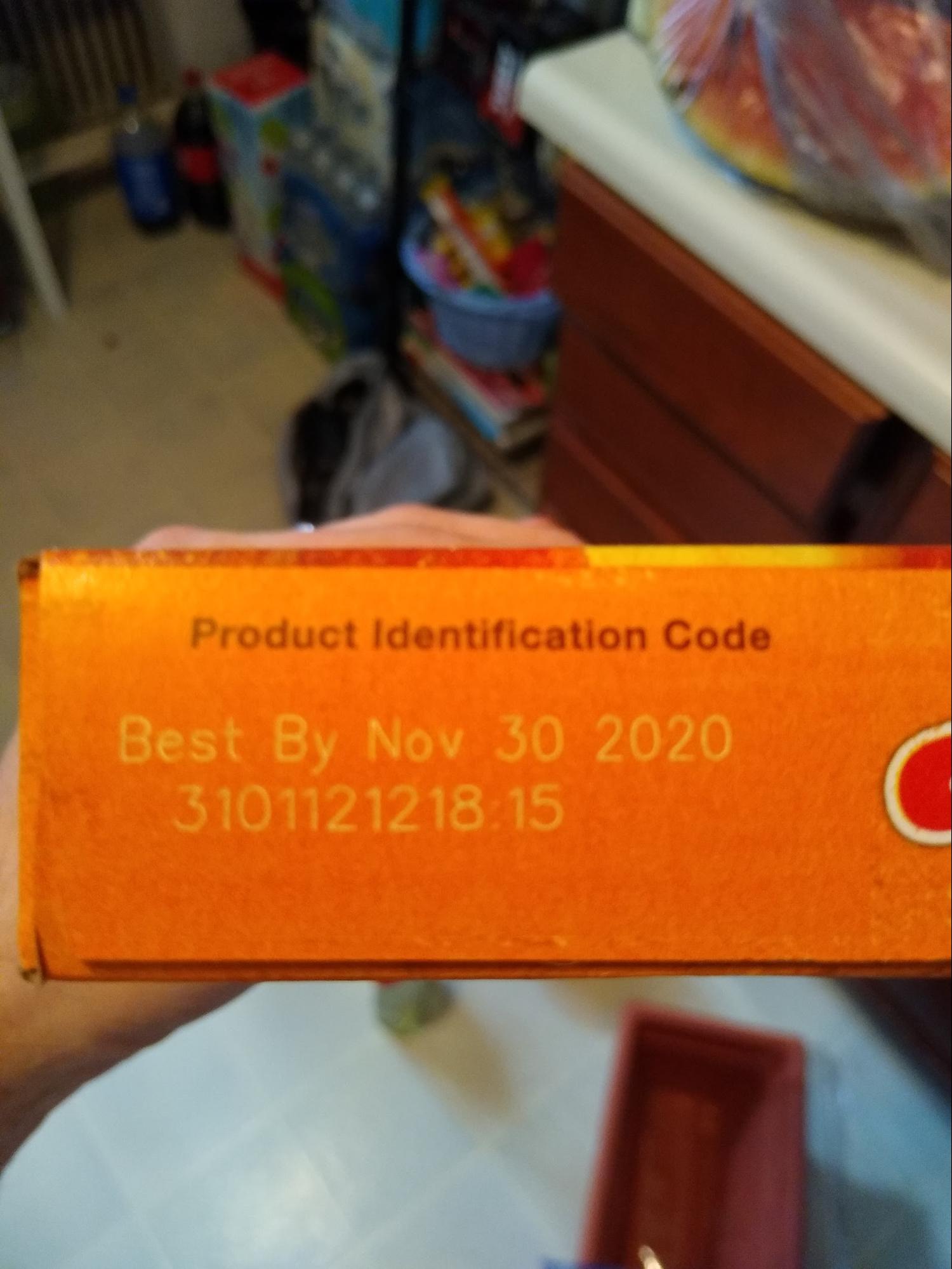 8) Jack’s — just under 7 months. The Jack’s people also offered me coupons, and I again accepted — DON’T FUCKING JUDGE ME!

This is the same kind of code as DiGiorno, probably because it’s also a Nestlé product. Thus, the digits “0062” translate to March 1, 2020, meaning Tony’s pizzas last just under seven months (which means I’ll have to hurry if I decide to hoard these with the aid of my incoming coupons). 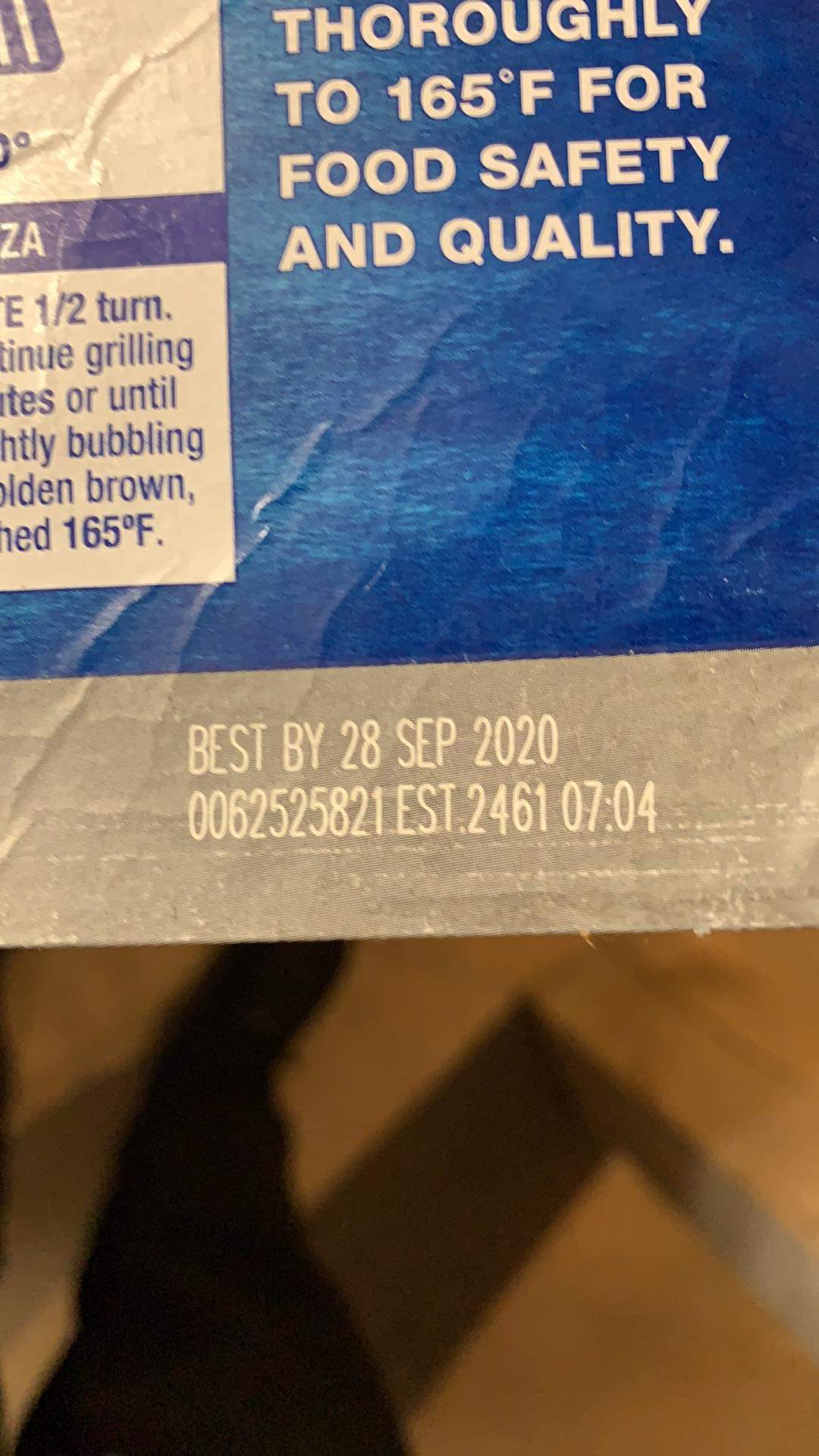 9) Red Baron — 6.5 months(ish). While the Red Baron in real life was nothing but an American-murdering World War I flying ace, their pizza is a fine product, and it has the same kind of production code as Tony’s. Those first two numbers are the plant, and the next four are the date. This means the “9318” decodes to November 14, 2019. So, their pizza lasts a little over six and a half months. 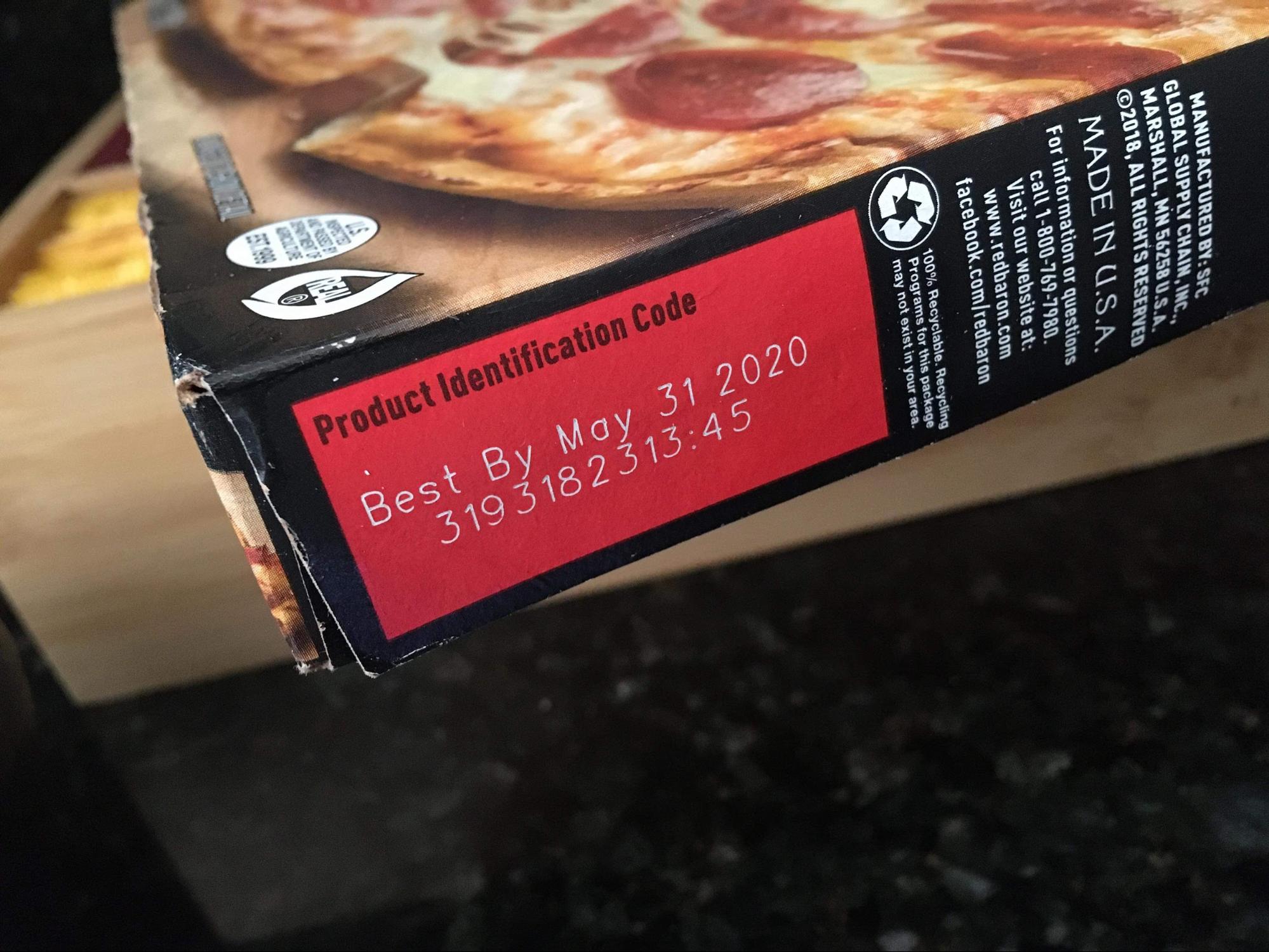 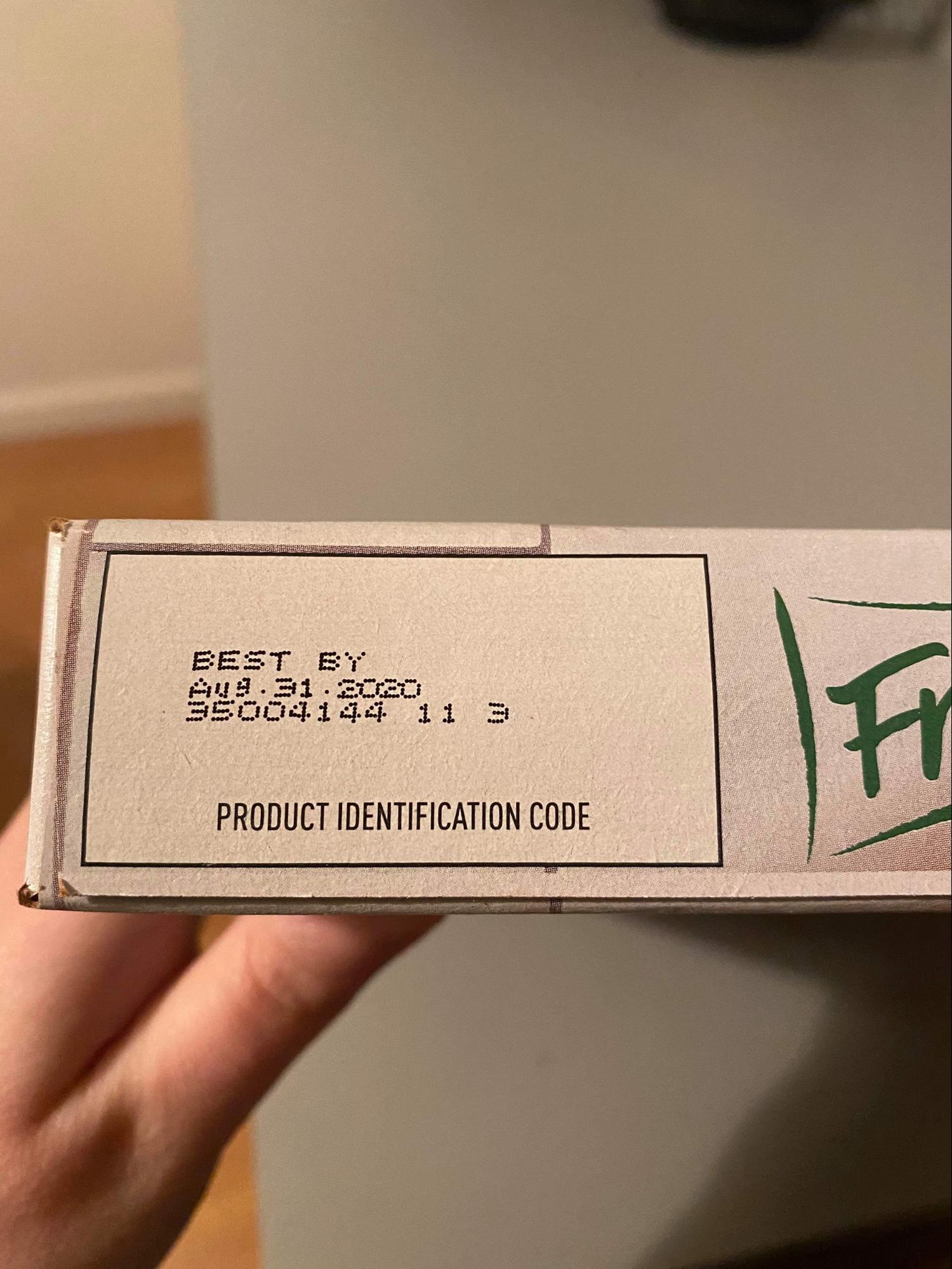 11) Totino’s — 5 months. While best known for their amazing invention “The Pizza Roll,” Totino’s also has a frozen pizza, though you can’t decipher its production date from the package. When I called them, they told me that their “Party Pizzas” have a shelf life of 186 days, which means you have to subtract that number from the date on the package. For the above, the date of production was April 7, 2020, or 186 days before October 10, 2020. 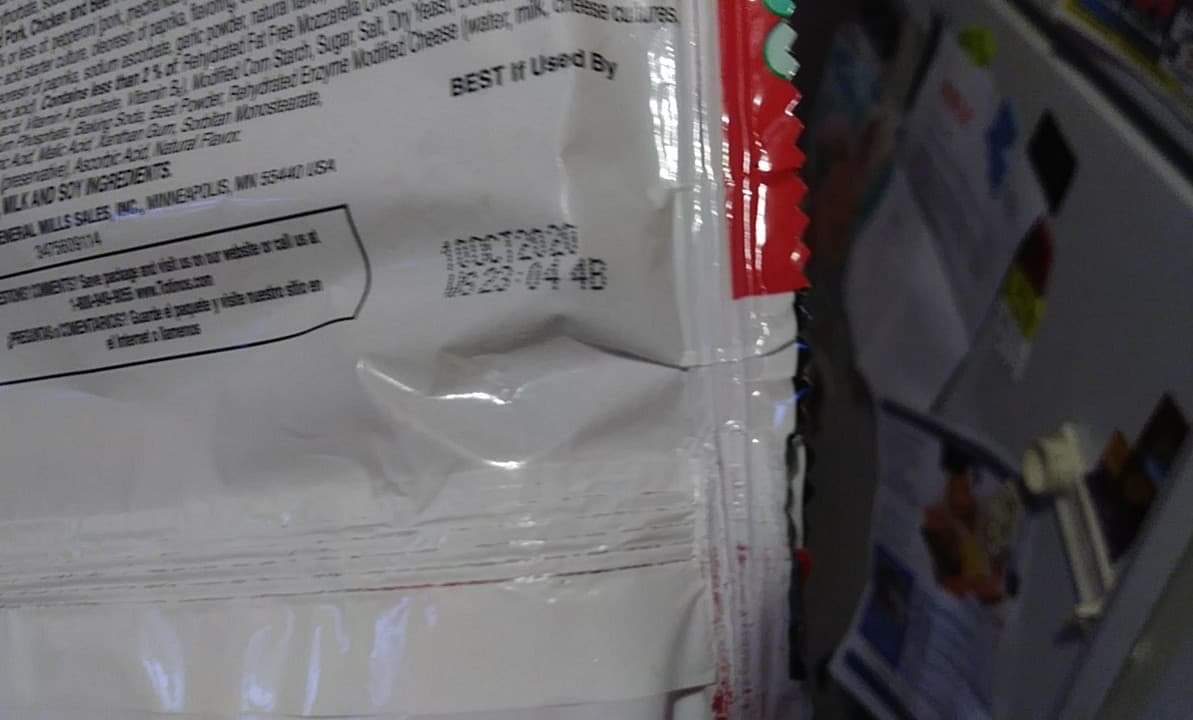 Now that you have the information you need, choose wisely when gathering your pizza stash and select the brand that best suits your pizza-hoarding needs — except for Ellio’s. I’m still not convinced that those guys aren’t hiding something.