For NBA fans, The Last Dance has been a treasure trove of 1990s nostalgia — especially for all things Michael Jordan and the Chicago Bulls. The documentary series covers so much — the shoes, the Dream Team, the championship runs, even Space Jam — but what isn’t acknowledged, despite its frequent appearances in the film, is a certain instrumental track synonymous with those Bulls teams. In fact, many listeners probably just think of it as “The Chicago Bulls Theme,” even though it has an actual name and origin long before its use at the United Center to announce the Bulls’ starting lineup.

“It’s a bit of frustration that people hear the music and says that’s the Bulls theme,” said the man who wrote that indelible instrumental. “I wish they did know it was the Alan Parsons Project. But they don’t.”

If people remember Alan Parsons, now 71, the chances are good that it’s as a shorthand for a specific kind of spacey, arty 1970s prog-rock that catered to brainy music fans who cared a lot about cutting-edge sound recording. He and his creative partner Eric Woolfson devoted whole concept albums to the works of Edgar Allan Poe (Tales of Mystery and Imagination) and Isaac Asimov (I Robot). They made symphonic pop music that was perfect for planetarium laser-light shows. They were huge dorks, which I say with much affection.

Thanks to 1980’s The Turn of a Friendly Card, bolstered by the hits “Games People Play” and the majestic ballad “Time,” the band was enjoying one of its commercial high points. And things were looking good for their next record, their sixth, which was to lead off with the groovy, slightly sci-fi “Eye in the Sky.” But Parsons, who wrote the group’s music — Woolfson handled the lyrics — decided he’d keep with Alan Parsons Project tradition and pen an instrumental to kick off the album.

“I was just tinkering around at home with my new computer musical instrument, the Fairlight synthesizer, back in 1982,” Parsons told Variety this week. “I came up with this little riff, literally thinking of it as a cool instrumental introduction to ‘Eye in the Sky.’” Pleased with the track, which is just under two minutes, he named it “Sirius,” which wasn’t a surprise considering the band’s love of all things intergalactic. “It relates to the star in the sky, which I felt was spacey and planetary, so we just chose it,” Parsons once recalled. “I think Sirius is the second-largest star in the sky.”

Before forming his own band, Parsons had enjoyed a distinguished career as an engineer on some of the greatest British albums ever made. He worked on the Beatles’ Abbey Road and Let It Be, and then hooked up with Pink Floyd for The Dark Side of the Moon. Even back then, he was obsessed with sophisticated sound technology — a tendency that was encouraged by the bands that employed him. “Just compiling the effects loop and getting all of the rhythmic sounds for [Dark Side’s] ‘Money’ took all day,” Parsons said in 2019. “You literally had to measure, with a ruler, the length of tape between each effect. If you did that on Pro Tools now, it would take 10 minutes.”

When Eye in the Sky (which was nominated for the Best Engineering Grammy) came out in the summer of 1982, it became the Alan Parsons Project’s highest-charting release in the States, and the title track hit No. 3, the group’s biggest U.S. hit. Most thought of “Sirius” as merely the adrenaline-pumping intro to the dreamy sweep of “Eye in the Sky.” (The instrumental’s bong-worthy guitar solos and far-out keyboard riffs wouldn’t have felt out of place on a Floyd album.) The band released new work over the next several years — and continued to have radio smashes like “Don’t Answer Me” — but Eye in the Sky was the end of their peak.

As can sometimes happen, though, songs end up taking on an unexpected second life. For “Sirius,” which was never released as a single, the resurgence came in the form of walk-on music. Eighties wrestler Ricky “The Dragon” Steamboat used “Sirius” when he entered the ring. But it was the Bulls who made the song an anthem. The story goes that the team’s public address announcer, Tommy Edwards, was sitting in a movie theater in 1984 when he heard a snippet of “Sirius.” Wanting to find a new theme for the team when they were introduced to the home crowd — they’d been using, among others, “Miami Vice Theme” at the time — he thought the track could do the trick.

When Edwards retired in 2019, he reflected back on lucking into “Sirius.” “The first memory [of my time with the team] that is most important to me is when I introduced the Bulls and Michael Jordan with the song ‘Sirius,’” he said. “I just knew it was going to work. … And then when it actually did, and the way the crowd responded to it, I just felt so good about that.” The song’s building keyboards gave the sense that something epic was about to happen — and the way that Edwards prepped the fans for the Bulls’ unveiling with a drawn-out “Aaaaand now!” only added to the drama.

Eventually, other teams, including the Nebraska Cornhuskers football program, incorporated “Sirius” into their intros, but for most sports fans, the song is permanently the Bulls’. Or as the Golden State Warriors’ Draymond Green put it in 2016, “Every time I hear it I think Michael Jordan” — even though Jordan stopped playing for the Bulls in 1998. In fact, if you do a search for “Chicago Bulls Theme” on Spotify, the top result is “Sirius,” which has now been subtitled “Chicago Bulls Theme Song.” 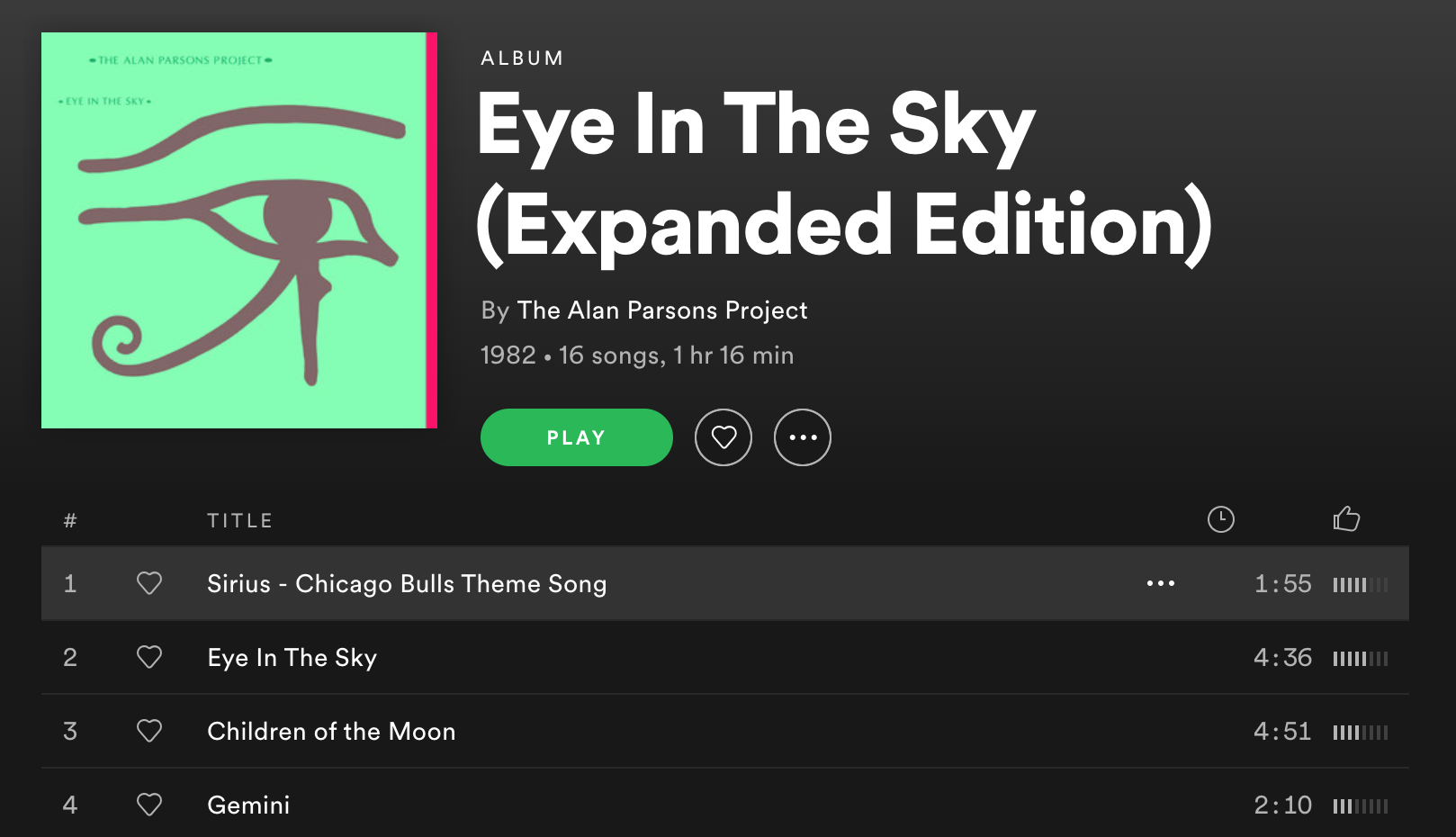 All this is probably funny to Parsons, who was never a big basketball guy. “I saw the Lakers [once] but I don’t remember who they were playing,” he confessed this week. “It must have been about 1981 or 1982.” And the one time he met Jordan, it wasn’t exactly memorable. “I shook his hand and said, ‘Michael, you probably don’t know who I am, but I wrote your walk-on music.’ And he said, ‘Oh, nice to meet you, man’ — almost like it hadn’t sunk in.”

But if you think Parsons makes bank off the song’s use in arenas, well, it’s complicated. “It would have been appreciated had [the Bulls] called me and asked for my blessing,” he said in that same interview. “But the fact of the matter is, venues have a blanket agreement with [performing-rights organizations] like ASCAP, BMI and SESAC. They can actually play whatever they want and just pay this blanket fee, which I am a small part of — like 1/100,000,000th of it. It would have been nice to have been contacted, but whenever it has been used in advertising or movies, I always get a nice little check for it. What’s interesting is that other basketball teams started adopting it as well. I guess they felt like the Bulls didn’t have any kind of ownership rights.”

Just how anthemic is “Sirius”? In 2016, Donald Trump used the song at his presidential rallies. “I think he has good taste in music, but he didn’t ask,” Parsons said at the time. “The powers that be made him stop.”

Was he offended to have Trump associated with his instrumental?