In 1939, Julius Fromm, the man who built a condom empire in post-WWI Germany, fled to London in fear for his life. Seeing the writing on the wall for Jews in Germany, Fromm knew he’d be no exception, especially since he was a prominent liberal Jew who had amassed a fortune off the sale of prophylactics, or “Fromms” as they were also known in Germany at the time.

Michael Sontheimer, co-author of Fromms: How Julius Fromm’s Condom Empire Fell to the Nazis, explains that a year earlier, the Nazis had forced Fromm to sell his condom factories for a fraction of their value to a prominant Nazi family. While this was a tragic development for Fromm, it was far from a surprising one: Back in 1930, the still-rising National Socialists had voiced objections to Fromm’s innovative condom vending machines, the first of which had been installed in Berlin in 1928. In 1933, when Hitler came to power, the Nazis banned condom vending machines from all public spaces, with only military buildings being allowed to have them.

On May 8, 1945, the Allies triumphed and Nazi Germany fell. Fromm was overjoyed at the news and excited to return to his native Germany to reclaim his rubber empire. Unfortunately, four days later Fromm would be dead of a heart attack. What was left of his factories after the ravages of war would be seized by Russia in order to provide its soldiers with much-needed prophylactics. 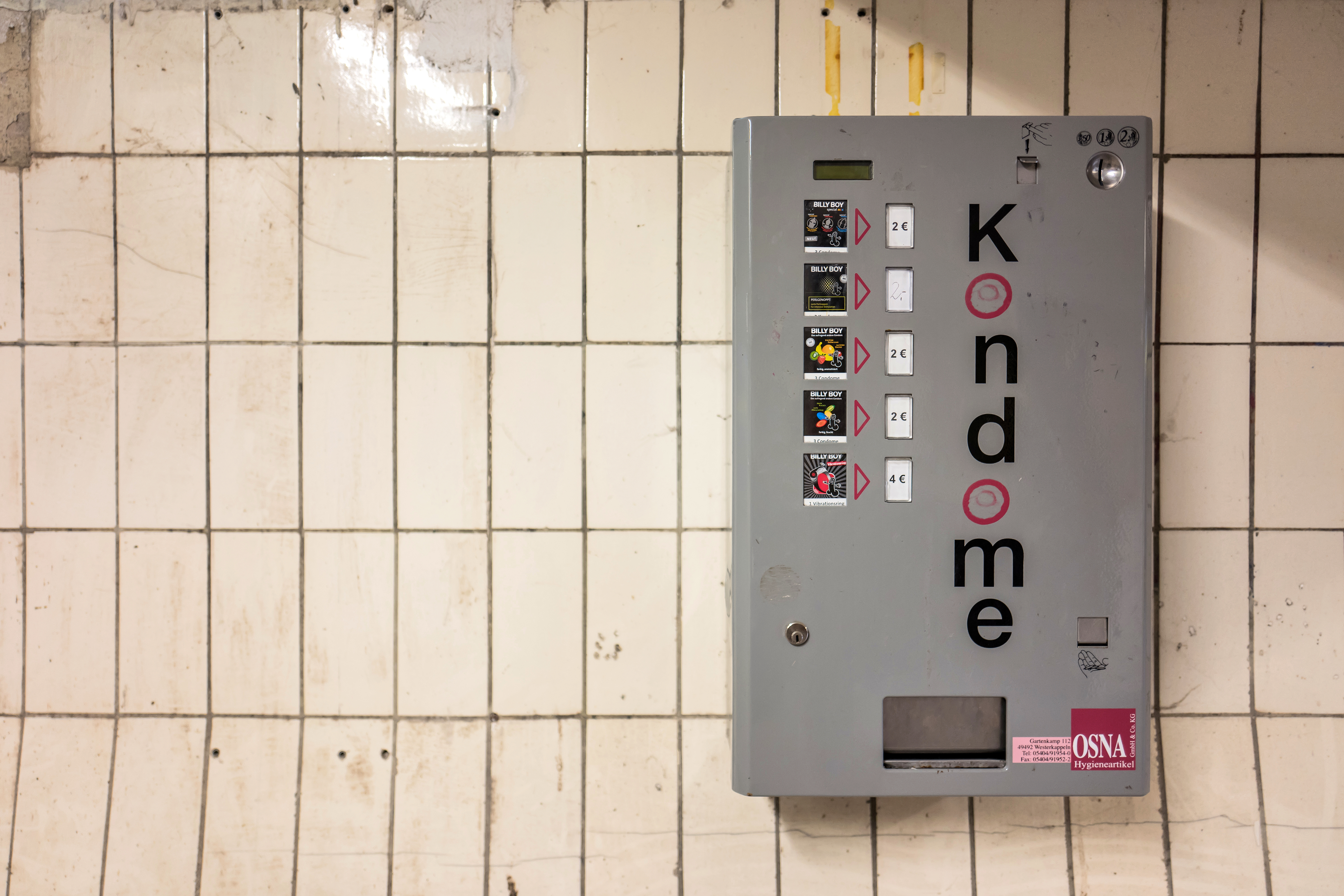 Here in America, while anything involving condoms wouldn’t be entirely without controversy, condom dispensers took a very different path. In its 100 years of existence, the American condom dispenser and the attitudes toward it changed decade by decade, as America worked its way through the tumultuous 20th century.

“The earliest ones came about around 1915 or 1916 — they were actually made of cast iron,” explains Sandy Lechtick, who owns one of the country’s biggest collections of coin-op vending machines. Back then, he says, the condom dispenser would dish out a condom for a penny in places like saloons and bowling alleys, and there was a level of discretion to those early models. “They were pretty sleek machines, so you wouldn’t know it was for prophylactics,” says Lechtick. They weren’t considered much of a novelty either, as coin-operated vending machines dished out all kinds of products back then. As coin-op collector Tim Claremont explains, “The vending machine industry was huge in the first half of the 20th century. You could buy anything from hard boiled eggs to fruitcake.”

What made them particularly advantageous, of course, was the fact that one could buy a condom discreetly and without the judgmental eye of their local pharmacist. G.K. Elliot, co-author of Remember Your Rubbers!: Collectible Condom Containers, explains that buying condoms back in those days was a bit of an ordeal: Although they also could be found at shoe-shine stands and cigar stores, when at the pharmacy, condoms were kept under the counter and would be shown to you on a velvet display, almost like you’d buy a piece of jewelry today. While people would do their best to make their choices with as little conversation as possible, there was definitely a stigma to condom buying, and the machines eliminated the need for such awkward situations.

In the carefree days of the Roaring Twenties, the condom dispenser would become more widespread and the designs would begin to vary. As it moved to places like convenience stores and gas stations, factories such as Harmon Machine Works began to create machines featuring risque cartoons to entice their customers. Classier joints like hotels, meanwhile, featured more ornate condom vending machines, highly artistic in their design and with a distinctive art deco influence. Mike Hasanov, who runs Vintage Coin-Op Restorations, explains that the 1920s and 1930s were the height of the ornate condom vending machine, with some of these models fetching upwards of $3,000 at antique auctions today.

Sadly, what was inside the dispenser often failed to live up to its fancy exterior. As the Chicago Tribune explained in 1986, “The [condom] industry’s boom days in the United States were in the 1930s and 1940s, in response to the alarming spread of venereal diseases… As the industry grew, however, there was a proliferation of unscrupulous ‘pirate’ products, sometimes of inferior quality, which were sold in such places as bars, restaurants, barber shops and gas stations.”

It was in this “pirate” market that the condom dispenser thrived. James Eno, of Maximum Amusements, who has been in the coin-op gaming industry for over 30 years, confirms that this would be a persistent issue for vending machine condoms, one that lasted for decades. “We used to wonder who would want to buy those condoms because we knew they were generic. The joke was that if you used them, you’d better use two or three at a time,” Eno says.

These low-end vending machine condoms did face some opposition, however — from none other than the New Jersey-based Youngs Rubber Corp., the original manufacturer of Trojans. As the Tribune explains, “Youngs led a successful, somewhat self-serving campaign to ban the sale of prophylactics anywhere but drugstores.” As a result, several states passed laws which would end up hurting the sales of vending machine condoms. Many of those laws wouldn’t be repealed until the 1970s, and by then, condom sales were at an all-time low.

In 1960, the birth control pill hit the market, sparking a sexual revolution — naturally, condoms sales plummeted, as everyone figured that the pill had it covered. The market wouldn’t revive until the AIDS crisis of the 1980s, during which time dispensers also boomed. As Nolan “Mr. Condom” Panisiak, owner of a condom-dispenser business, confided in a 1989 Chicago Reader profile, “Let me tell you, AIDS is the frosting on my cake.” And while Panisiak’s remarks are insensitive in any era, it does illustrate the fact that condom sales in every form benefitted from the AIDS crisis.

That profile of Panisiak, and another a year earlier by the Chicago Tribune, offers a glimpse into the world of condom-dispenser sales and supply during the latter decades of the 20th century. Much like vending machines today, the stores where they stand rarely own the machines: Instead, someone else owns and supplies the devices and the stores get a cut. Guys like Panisiak would buy the machines from a factory, install them in stores and supply them on a monthly basis. In many cases, this was all they did — their business was simply owning, fixing and refilling condom vending machines.

It was looking into this unique profession that led me to a man named Rod Berg, who supplied condoms and condom dispensers throughout the Midwest from 1979 to 2012. When I ask Berg how I should describe his profession for the sake of this article, inquiring if he should be called a “salesman” or a “distributor,” he tells me proudly, “I was a rubber man!” Berg not only ran his own business for over 30 years, he also followed his dad into the profession, who began as a rubber man back in 1959. “I used to ask my dad what he did for a living, and he’d say to me, ‘I’ll tell you when you turn 14.’ Of course by then, I’d already figured it out,” Berg shares.

Berg recalls going to the Harmon factory in Wichita, Kansas and buying the machines, then installing them and replacing them on his regular route. He also remembers having to clean off the graffiti that had proliferated. “I eventually figured out that the machines that had a picture of a girl on them gave the artists something to work with, so I started to replace those images with more of a pharmaceutical-looking image. That cut my graffiti down to almost nothing.”

This would be the trend of the time, too: While dirty logos were common in the 1920s, things became more conservative in the decades that followed, only to become raunchy again during the 1970s. But in the 1980s, the medical benefits of condoms became a better way to sell them than the sexual angle, so the imagery changed accordingly, remaining that way ever since.

The AIDS crisis would end up being the last big boom for the condom dispenser. While they’ve never completely gone away — and many colleges even have free dispensers now to encourage safe sex — the 1980s and 1990s would see a number of changes that would affect the business profoundly. The biggest one, without a doubt, is that after the sexual revolution and the AIDS crisis, many people stopped being too embarrassed to buy condoms. It was during this time that condoms began to be sold everywhere (Walmart, grocery stores, etc.), thus no one needed to discreetly buy them from a vending machine anymore.

But, as Berg explains, that wasn’t the only thing that hurt the condom-vending industry. “Corporations are the biggest problem,” he explains. “Back in my dad’s day, everything was independently owned. You’d walk in and say, ‘Hey Joe, how about putting up a machine?’ And Joe would say, ‘Hell yeah, I’ll take a few extra few bucks.’ But now, you’ve got to go to the head of the corporation and that can be a real hassle.” So whereas a locally owned diner in the 1950s might have been happy to put a condom machine in their bathrooms to stop kids from not wearing socks to their own private sock-hop, once the 1980s rolled around, you couldn’t stroll into a Denny’s and offer the same kind of pitch. Even if you did end up trying to hit up some corporate suit, it’s more than likely they wouldn’t want to be seen as encouraging sex at their establishment. This is why, as Berg explains, more restaurants eventually stopped carrying condom machines and his business mostly shifted to gas stations in the late 1980s. 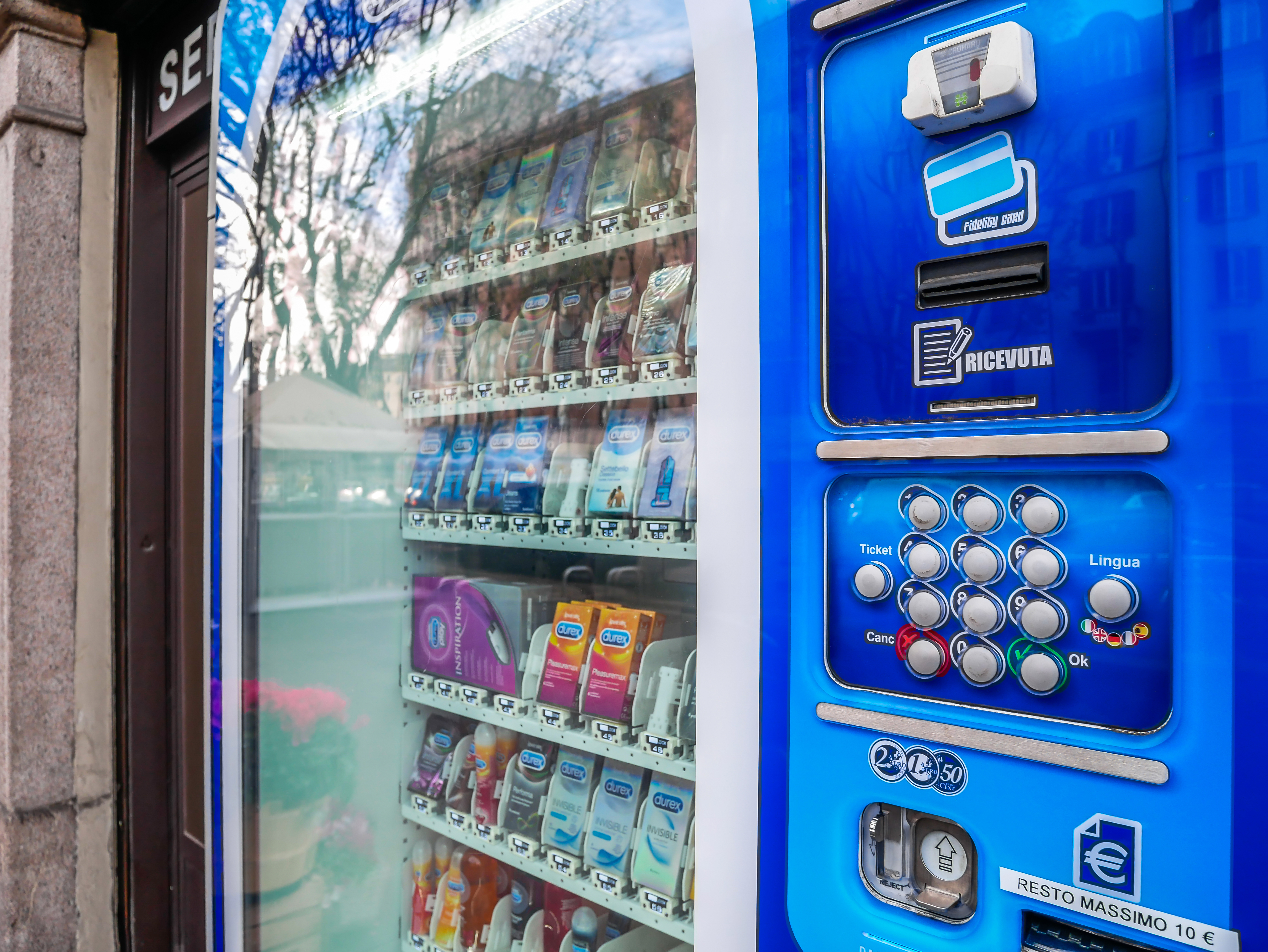 Even the gas stations route would eventually dry up, however, thanks to an increasingly cashless society. Without change in your pockets, buying from a coin-op vending machine becomes literally impossible, and with no stigma anymore, getting condoms at the gas station register isn’t a problem. Which brings us to another factor that’s affected condom-dispenser sales: pay at the pump. As Berg explains, “Now people only go in if they have to use the bathroom, but back when they had to go inside to pay, they’d just go to the bathroom anyway, and that’s really killed our business. It’s killed their business, too. People don’t go inside to buy pop anymore, they just fill their tank and leave.”

Although he still occasionally fixes up antique condom machines for collectors and sells a few on eBay, Berg sold his primary business in 2012 due to all the reasons listed above. “I got out just in time, too, as I’ve heard it’s gotten much worse after I left,” he explains. Which just goes to show, even a condom expert knows that pulling out at the right moment is sometimes the best option.