Ranking Indian Takeout Dishes by How Healthy They Are

Chicken tikka masala? Saag paneer? Samosas? Which will do my body as much good as it does my taste buds?

I got hooked on Indian takeout when I was much smaller and much younger than I am now. My dad would order my sister and me chicken tikka masala, garlic naan and a side of vegetable samosas — a rather tame order, from what I can tell — and I usually stick with that same order nowadays, occasionally replacing the chicken tikka masala with aloo gobi, a potato and cauliflower dish that makes me feel slightly better about myself.

But I want to start expanding my culinary horizons, and I want to be smart about doing so, which is why I asked Dana Hunnes, senior dietitian at the Ronald Reagan UCLA Medical Center, to help me rank an assortment of Indian takeout dishes by how healthy they are — from mega healthy to harmful in large amounts over an extended period of time.

If you have a thing for Indian food, too, follow along. 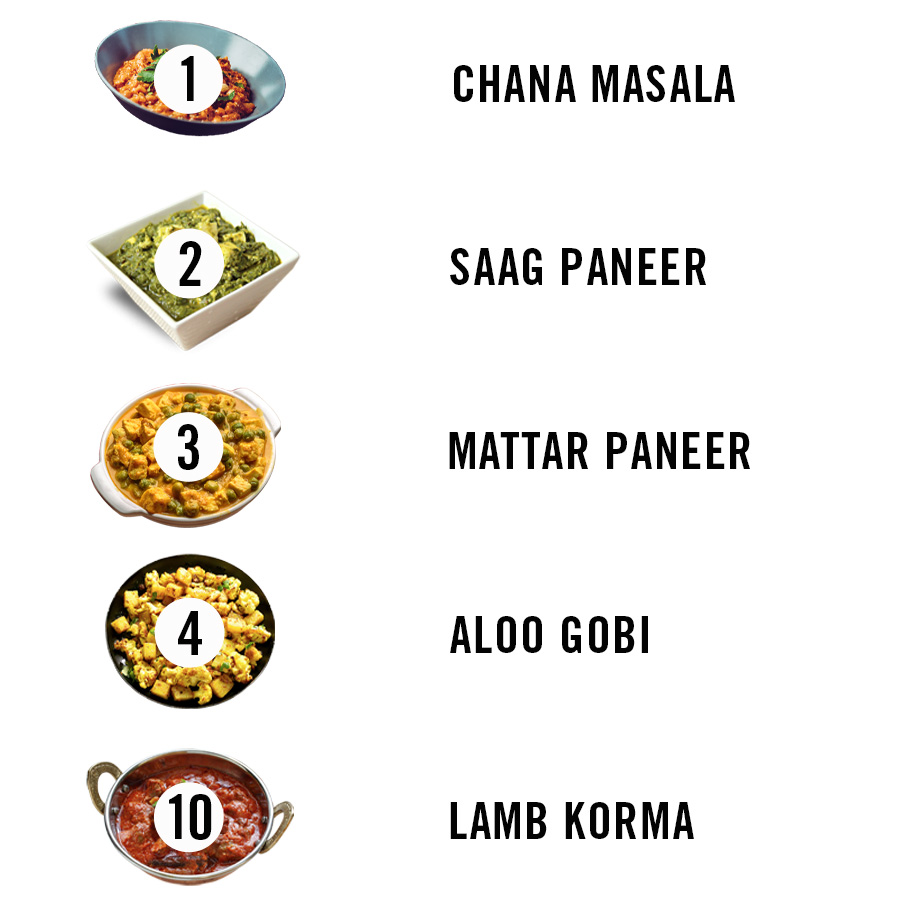 1) Chana Masala: According to Hunnes, chana masala — which typically consists of chickpeas, onions, tomatoes and a variety of spices — is the healthiest dish in our ranking. For starters, she explains that, compared to meat-based dishes, plant-based dishes like this one generally have less saturated fat, which might increase your chances of developing cardiovascular disease when consumed in large amounts. Furthermore, Hunnes praises chickpeas, calling them “a great source of plant-based protein and fiber.” Indeed, chickpeas are ultra healthy, and considering chana masala is basically just spiced chickpeas mixed in a vegetable-based sauce, this dish is a great choice.

2) Saag Paneer: Saag paneer is a dish consisting of cooked spinach and paneer cheese. Spinach, of course, is loaded with nutrients and antioxidants, but Hunnes says the addition of cheese sends saag paneer to second place, because cheese adds unhealthy fats to the mix and contains a potentially cancerous protein called casein. “The other reason why I put it in second place,” Hunnes adds, “is because it doesn’t provide as much protein as chana masala.” Put simply, saag paneer is simply a less substantial dish.

3) Mattar Paneer: While similar to saag paneer, mattar paneer replaces the spinach with peas and a tomato-based sauce. “This is a close third,” Hunnes says. “It has some protein from the peas, and a lot of fiber. I have nothing bad to say about this dish, but it doesn’t have quite as much protein as chana masala.” Again, chana masala is just more balanced.

4) Aloo Gobi: Ah, my friend, aloo gobi, the dish that makes me feel slightly better about myself — and for good reason, as it turns out. “This is a close fourth, because it’s a potato and cauliflower dish,” Hunnes says. “It’s very high in fiber and potassium [which regulates fluid balance and supports our muscles] and low in saturated fat, but also low in protein. Still, if you put the top four dishes together, you have a super healthy, plant-based meal.”

5) Samosas: Samosas are fried or baked pastries that come with a variety of fillings (usually, some combination of potatoes, onions, peas, meat or lentils). “These are often fried, so that makes them less healthy than the super healthy dishes above,” Hunnes explains (fried foods are high in calories and trans fats, which are awful for your heart). “However, if you get them filled with plant-based options, that would definitely be healthier than if they were filled with meat — and if you can get them baked, even better.” Thanks for always ordering the vegetarian ones, Pop-pop.

6) Naan: A type of flatbread, Hunnes says, “This is a white flour-based bread product, although so delicious.” White flour, mind you, is basically nutritionally void, meaning it might as well be empty calories. “I put naan in this place because it’s not particularly healthy, but it’s not super unhealthy, either. Try to limit yourself to a few slices.”

7) Chicken Tikka Masala: Chicken tikka masala consists of spiced chicken chunks in a (usually) cream-based curry sauce, and it saddens me greatly that it lands this low in our ranking. “Recent studies indicate that chicken may be just as deleterious for heart disease as red meat, so buyer beware,” Hunnes warns. “However, this item is typically non-dairy [when made with, say, coconut cream] and mostly just a spicy red sauce with Indian spices. So, it’s not as bad as red meat dishes, in that sense. Plus, it usually has less saturated fat.”

8) Butter Chicken: Similar to chicken tikka masala, butter chicken is chicken in a spiced tomato sauce, rich in cream and, of course, butter. “This isn’t a healthy dish at all,” says Hunnes. “It’s very high in saturated fat, dairy products that may promote tumor growth and calories. Though, I’ll admit, many years ago, when I was still eating chicken, I thought this dish tasted delicious.” And you thought right.

9) Lamb Vindaloo: As Hunnes explains, lamb vindaloo is “a lamb-leg stew in a tomato sauce.” She continues, “Lamb is very high in saturated fat and isn’t healthy. It’s red meat and may increase the risk of colon cancers. The one thing lamb vindaloo has going for it is that it’s usually cooked in tomatoes, which are high in lycopene.” Lycopene is an antioxidant that’s been linked to many health benefits, including reduced risk of heart disease and cancer, which is good considering lamb (and red meat in general) may cause those exact ailments.

10) Lamb Korma: Kind of like lamb vindaloo on flavor steroids, “This is a lamb-leg stew in tomato sauce and yogurt, which has the negatives of both high-fat dairy and red meat,” Hunnes says. “I’d limit or avoid this.”

Whew, sounds like I’ll be having a nice, healthy lunch of chana masala and saag paneer… with a side order of chicken tikka masala, garlic naan and vegetable samosas, obviously.