With Bennifer Back, It’s Time to Truly Grapple With ‘Gigli’

Supposedly one of the worst films ever, the 2003 bomb still beats whatever’s new on Netflix

Are Ben Affleck and Jennifer Lopez really “back together,” or is their allegedly rekindled love the most cynical sort of Hollywood publicity scheme, concocted to play on our nostalgia for the early aughts tabloid frenzy? I doubt if it really matters. Ben and Jen’s relationship is somehow more than the sum of two stars — a story that demanded the first celebrity couple portmanteau, Bennifer — and endures whatever their current feelings for one another. All that’s required is a few pictures of them in the same place at the same time; the audience does the rest.

The head honchos at Columbia Pictures and Revolution Studios were surely praying for this outcome in the weeks before the release of Gigli, a 2003 crime comedy featuring the pair as romantic leads. Sure, it’s a mess, they probably told themselves, but maybe the actors will dish enough sex appeal to save it. Instead, the movie became a popular punching bag, and its curious title a synonym for artistic disgrace. (Martin Brest, the screenwriter and director, despite enjoying earlier success with films including Midnight Run, Beverly Hills Cop and Scent of a Woman, has directed nothing since.) Adding personal insult to career injury, the reviews often charged that Affleck and Lopez lacked chemistry. This, however, is an oversimplification.

Having just watched Gigli for the first time, I can tell you that the spark between them at the time is very present — it’s just that everything around it is the weirdest fucking shit you’ve ever seen. 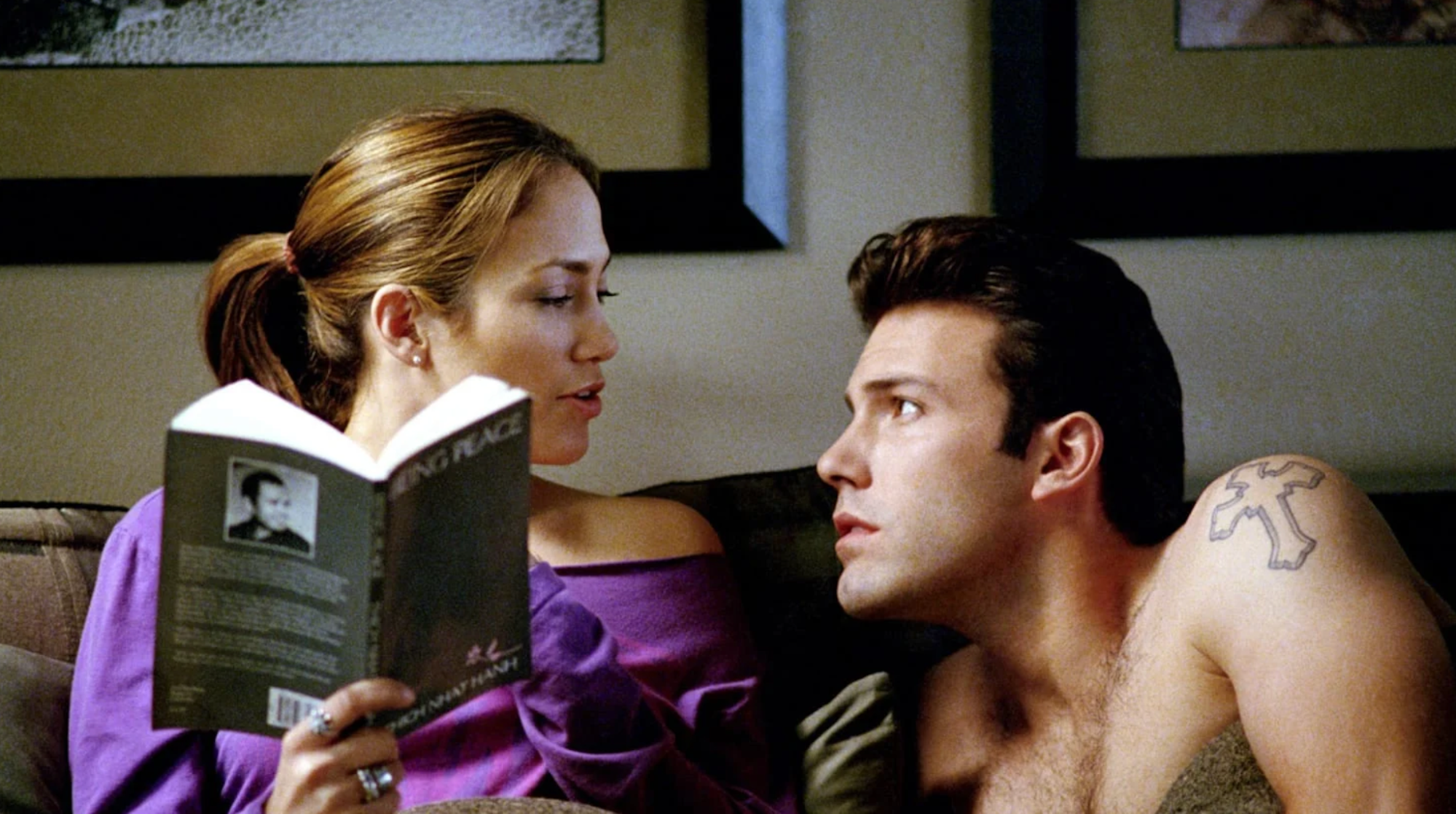 I’ll admit that as I rented it for $3.99, part of me wanted to like Gigli, even on a trollish, contrarian level. With America celebrating the return of Bennifer, I hoped their notorious bomb would make the case for its own (modest) redemption. Imagining that yesterday’s critics just couldn’t resist taking a hatchet to the hottest item in the industry, I asked myself, “How bad can it be?”

The answer: Quite bad, but bad in a way that makes you miss the bizarre, big-budget studio failures (it cost $75 million!) that have since vanished in a flood of superhero flicks and streaming content, all the algorithmic fan-service junk that entertainment brands know you’ll find blandly competent at worst. Against that backdrop, Gigli is special, and even — dare I say it? — fascinating. It steps on every rake in its path. They don’t make bad movies like this anymore.

Gigli’s awesome power is such that a cursory discussion of the plot is enough to get you cringing. Affleck is Larry Gigli (rhymes with “really”), an aspiring L.A. gangster whose boss instructs him to kidnap Brian (Justin Bartha), the intellectually disabled brother of a federal prosecutor, in hopes of quashing a high-profile mob case. Within 22 minutes of the opening credits, Gigli calls Brian a “retard,” and it’s honestly surprising this doesn’t happen sooner. Because Gigli’s superior thinks he isn’t up to the job, he sends another “contractor” to help keep Brian under wraps: a preposterously attractive woman (Jennifer Lopez), who identifies herself as Ricki and seems to be a far smoother operator than Gigli. The bulk of the movie concerns their adventures in babysitting, first as bickering odd couple, and then… well… yeah.

“Rom” supposedly meets “com” in Gigli’s efforts to sleep with his mysterious new coworker, initially foiled by the revelation that she’s a lesbian. Instead of any real plot to speak of, we find ourselves in a genre pile-up. There’s the quippy noir element, typically derided as a weak imitation of Quentin Tarantino; the broadly offensive caricature of a developmentally impaired man, which could’ve come from a Farrelly Brothers or Jim Carrey movie; and lastly, the quest to convert a gay woman, as if Affleck hadn’t already done that in Chasing Amy six years before.

Is Gigli, as they say, “so bad that it’s good”? I think this stock analysis is far too reductive. It’s not the anti-masterpiece of a deranged auteur like The Room, or a breathtaking boondoggle like Waterworld. And while it obviously takes place in the Entourage universe, it doesn’t stoop to the absolute nadir of the 2000s frat-bro aesthetic. Somewhere in there is a C+ movie struggling to be heard over the meddling of producers and focus groups, and you glimpse it in the actually funny gags (when Brian wants a bedtime story, Gigli, owning not a single book, has to read him the label of a tabasco bottle) and scenes that set us up for never-achieved consequences (early on, a detective played by Christopher Walken arrives at Gigli’s apartment, sniffing out leads on the abduction, but there’s no follow-up; Walken simply walks out of the movie). In its stubborn, maddening refusal to cohere, Gigli is like an avant-garde satire of the industry that created it.

And since it avoids most narrative or tonal continuity, the film is unpredictable and rarely boring. One minute it’s tootling along as a light-hearted caper, and the next, Ricki’s jilted ex-girlfriend bursts into Gigli’s apartment to slash her wrists, or Al Pacino — yes, Al Pacino! — blows someone’s brains out mid-monologue. The sex scene is both comically intense and brazenly unjustified, Brian raps “Baby Got Back” while Gigli cuts a thumb off a corpse in a hospital morgue, the score vacillates between cheesy lounge music and hyper-sentimental orchestration, Ricki describes the process for ripping an eye out so that the victim also loses their visual cortex and thus the memory of all they’ve ever seen and we are introduced to the ejaculatory euphemism “they make my penis sneeze.”

It is a hallucinatory experience, and the only payoff is for the single recurring bit that Gigli manages to preserve: Brian’s childlike belief that Baywatch depicts is a real destination he can visit. His wish is fulfilled when the trio spots a production crew shooting a music video on the beach, and our emotional high point is watching him wander onto the set and chat up a bikini babe as Gigli gazes on with nodding approval.

None of this is defensible. And yet, and yet. Given the choice of any new dreck on Netflix, the tenth installment of a multibillion-dollar tentpole franchise or a cinematic clusterfuck that is easily carbon-dated to its exact, embarrassing bygone era, I cannot pass up the historical artifact. Gigli isn’t, as many rushed to declare, one of the worst films of all time. Not even close. It is strange, risky, dumbfounding — or, as Roger Ebert generously wrote of the dynamic between Affleck and Lopez in 2003, “different, thoughtful and a little daring.” The shitty movies nowadays wish they were this interesting. Hard to deny this flop deserved the scorn, but maybe, in retrospect, it deserves a little love as well. Not like we’ll ever capture that magic again.

On the other hand, it’s Hollywood. A sequel is always on the table.