Matt Rogers and Dave Mizzoni, hosts of Quibi’s ‘Gayme Show,’ made the anti-‘Queer Eye’ — where straight men are the minority

Take the rainbow aesthetic of Jojo Siwa and combine it with the comedic timing of Bob Barker and a dash of reality TV allspice (RuPaul’s Drag Race, American Idol and The Price Is Right). What do you get? Gayme Show.

Hosted by Las Culturistas podcaster Matt Rogers and stand-up comedian Dave Mizzoni, Gayme Show is a comedy competition series on Quibi in which two straight men compete to become “gay as fuck.” It’s the land over the rainbow where straights are the minority, Vonzell Solomon is the true American Idol and knowing Kirsten Dunst’s oeuvre is a prerequisite for success.

Rogers and Mizzoni started Gayme Show as a live comedy event at Upright Citizens Brigade in New York in 2017, when the duo were dating. During the ongoing live show,  two straight male comics tackle queer culture touchstones like knowing how to make an entrance and surviving a gay pride parade. They’re given two lifelines: a “wise queer” and a “woman who gets it.” The rotating honorary panel includes Bowen Yang, Joel Kim Booster, Ilana Glazer and Rachel Bloom.

As hosts of one of Quibi’s first short-form mobile video shows, Rogers and Mizzoni are finding personal success in unprecedented formats. Rogers (who’s quarantining in Los Angeles) and Mizzoni (in New York) called MEL over Zoom for a conversation about their seven-minute game show. We talked about the episodes with more gay than gayme, why straight men need to learn to leave their masculinity prison and how Survivor became the most homoerotic show on TV.

Interview edited for length and clarity.

What was the inspiration for Gayme Show?
Matt: Dave was doing a bit of his stand-up called “Celebrity Essences,” which is a part of the Quibi show. I came to Dave with the idea that maybe there was a show to build around it. He actually had already had that idea, and we simultaneously came up with the same name: Gayme Show.

Dave: I immediately went to Google and was like, this has to have been done already. Somebody has to have done this on TV. It hadn’t been done.

Matt: While it wasn’t a groundbreaking title, we actually like that about it. This sort of dumb vagueness of it all was just really fun for a live show.

How did you make sure that these gay stereotypes weren’t offensive, but funny?
Matt: It’s queer people making it. Sometimes that’s getting lost in translation: “Because it’s straight people competing, straight people [must be] in charge of it.” We didn’t let a single straight men touch this damn show.

Dave: They hung the lights.

Matt: I wasn’t ever worried about it feeling too broad. Obviously there’s going to be sensitivity whenever anything queer is made, because we just don’t have a lot of examples of them.

Dave: That’s part of the reason why we developed the roles of the lifelines in the challenges. Matt and I represent a portion of the queer community, but there are also so many other parts of the community that make it the bubbly, fun place to do these kinds of games. Having different people in the “woman who gets it” role and having different “wise queers” come in, these are all people that are somewhere on the queer spectrum. They add that extra touch and that diverse energy we want in every single show. 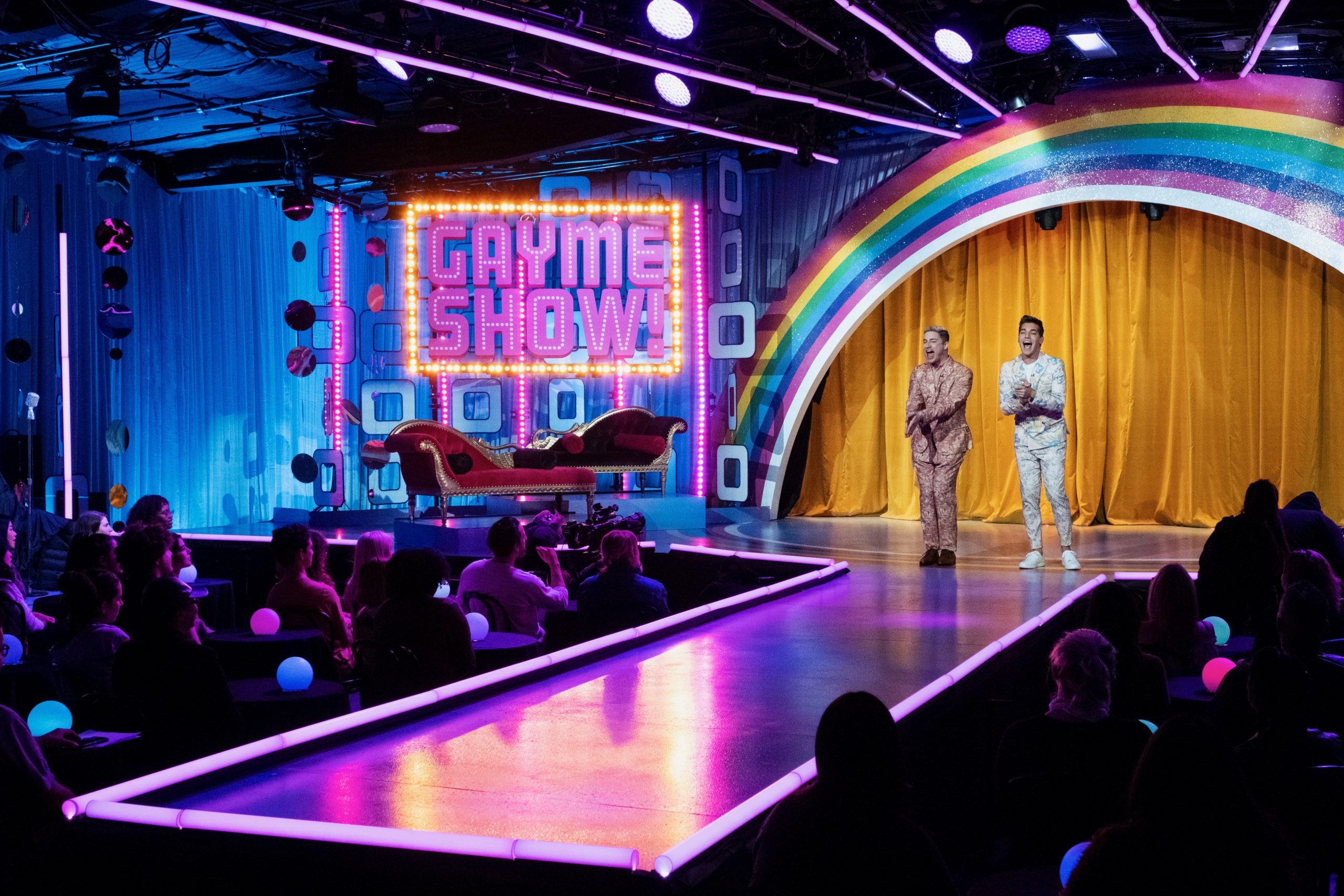 Tell me a little bit about the sketches and the challenges. The one I laughed most at was the Laura Dern button-down shirt challenge. How did you get so many button-downs?
Dave: Amazon, baby. We saw it like The Price Is Right meets Miss Teen USA. The most fun part of our shows is forcing the contestants to do things and leading them down the creek without any type of paddle at all.

There’s an amazing challenge called “Acting Battle.” All two-person scenes are a battle. There’s a winner, and there was a loser. So we asked the two of them to perform a scene from an iconic movie. Maybe I won’t reveal.

Matt: Not every game that we play has to do with the concept of knowing celebrities. This is not about these straights becoming gay in a sexual sense. This is about steeping them in every part of the queer culture. We have one game which is basically playing on the trope of a little boy who all he wants to do is dance and his father just will not accept him.

Matt: This is about reaching into the deepest parts of our identity and bringing it out, gamifying them and taking strength in these things that maybe have been painful or intimidating for us in the past.

Often, with queer shows, they’re either targeted directly for a queer audience and you’re expected to know the references. Or it’s targeted to a mainstream audience with “let me teach you” moments.
Matt: Quibi was very supportive about keeping the very gay, queer, wild and over-the-top energy of the live show. As someone who’s tried to get a lot of things made in this industry, I know how hard it is, especially as a queer creator. I did have my eyebrows cocked a little bit. I was like, oh really, you’re gonna let us do whatever we want?

Dave: It’s not even that what Matt and I do subject-wise in the show is particularly representative of the entire queer community. What unifies us is that it is what speaks to us specifically. Being unafraid to laugh about that together is part of what makes queer spaces so sacred.

Matt: Yeah, it’s about not taking everything too seriously. If you’re someone who does take things too seriously, then do some work on yourself before you watch this show.

So what is it like to be releasing your baby during a pandemic?
Matt: Of course, it’s difficult to appear enthusiastic at all at this time when so many people are going through so much. The challenges everyone is facing are so tough. If this gives you time and space to mentally remove yourself from what is a really daunting time then I’m really happy and proud of that, and I’m sure Dave is as well.

If you’re trapped at home by yourself without your queer family, what are some ways that you think people can be “gay as fuck” at home?
Matt: Well, you can start by watching this show, because I can’t think of a gayer thing to do than kick around this little program. I would say it’s always good to keep that skin right and start using those creams. Also maybe learn how to cook something flamboyant.

Dave: Absolutely. Get yourself a good retinol.

Matt: Good opportunity for skincare. You can just sit around.

Dave: Also a great opportunity to binge things that don’t matter that help you escape into a time when you were younger. Matt and I are currently bingeing Survivor.

[Gays talking over each other]

Matt: She is a woman who gets it.

Dave: We want her on the show. We will be getting her on the panel. Absolutely. We need a Survivor-themed challenge. That’s all I’ve been thinking about. What is our Survivor?

I didn’t realize how many gay people watch Survivor.
Matt: Very gay show, which is weird, because the show itself is truly a conservative nightmare.

[More gays talking over each other]

Matt: Every single time, you get, like, the aggressive young hot straight dude who dominates some challenges. Then a bunch of, like, shrewish women who are wondering, How are we going to do this? It’s so stock, but it’s so satisfying every time. And, like, one gay.

Dave: Yep, one gay who’s a flight attendant. There’s that one season with the two gays. What was it? The two hot ones.

Dave: Oh my god. My roots were, like, an inch and a half. I just kind of went for it. Now I’m buzzed, though I do love my blond look. I wanted to do it before I turned 30, as I am still 29, and I would like that first in the article.

Are you a gay in crisis?
Dave: Am I in a crisis? No, absolutely not. I’m thriving. The blond was an accentuation of my personality, and I wanted people to look at me and think, What a fag.

Who are the other “wise queers” and “women who get it” you would like to have on the show?
Matt: Because she was kind of interested in doing it but it didn’t work out scheduling-wise, we really would love to have our Quibi sister Chrissy Teigen. It would be even more fun to have her compete with her husband, EGOT winner John Legend. He can add “honorarily gay as fuck” to his EGOT, which I’m sure he’s really hungry for.

Dave: You get a crown, but you just have to give it back because we only have one.

Unlike the live show, the Quibi version ends with a strutting challenge called “Make an Entrance.”
Dave: Our finale for Quibi was always in the show and always one of my favorite parts. We’d have them come out to Demi Lovato’s “Cool for the Summer,” which we say is our generation’s “Somewhere Over the Rainbow.”

Matt: Our grandparents had “Somewhere Over the Rainbow,” and our grandchildren will have “Cool for the Summer.”

What have you learned working with these straight men as they investigate their masculinity?
Matt: It is so antiquated, the idea of what a man is. In terms of these straight men, I just appreciated that they were willing to go for it and not be like, “Oh hold on, what is this gay shit that I’m about to do that’s gonna make me look a certain way?” I really think we’ve moved past that. If you are still thinking about that, then nut up, dude.

Matt: The other thing is, like, this show is not Queer Eye. We’re not interested in rehabilitating straight men. What we’re interested in is having fun shows.

Dave: Moshe Kasher was like, “I really want to twerk at some point and could do some type of, like, ice entrance.” We were like, “Yes, absolutely.”

Matt: Max Silvestri was very enthusiastic about getting down to nary a little bathing suit.

Dave: We did not make him strip down. It was all him, baby.

Is there anything else to add?
Dave: Straight guys will do anything when you make it a competition.