So asks the demonic Black Phillip — the villain of the 2015 horror film The Witch — when converting a 17th-century Puritan colonist to the ways of evil. Everything about the signing-your-soul-to-the-devil pact is understood in this haunting (and heavily memed) question. When you cast your lot with Lucifer, life is going to taste a whole lot sweeter. That’s the upside.

The line echoes in my head whenever I think about a particular convenience store junk food: Fritos Honey BBQ Flavor Twists. They’re the basic Fritos, only made in a fusilli-like corkscrew shape, and, of course, infused with honey barbecue flavor (the seasoning ingredients include brown sugar, onion powder, tomato powder, garlic powder, honey solids, “spices,” salt and a good deal of artificial coloring, among other things). Nothing on the bag would lead you to think these corn chips are any more addictive than the usual savory snacks you buy on a road trip. 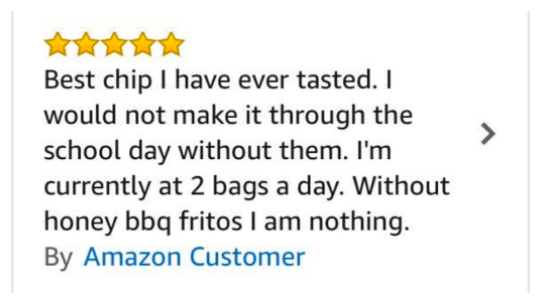 In January, when we all still had ambitions for the year ahead, I jokingly declared on Twitter that I’d become a “chipfluencer.” Someone who finds or receives the fanciest and most exotic chips to sample — or, failing that, just shares opinions of the chips he’s eating. Obviously, I wanted an excuse to maintain the diet of a city raccoon. And I did get some free chips out of it.

My content found a good audience. It wasn’t until late October, however, that I posted a bag of the Fritos Honey BBQ Flavor Twists, mentioning that I tried to stay away from them ever since developing an acute habit a few years prior. At once, my replies were flooded with people who had also fallen into the honey barbecue abyss, courtesy of Frito-Lay’s quietly addictive product. They called it the “crack cocaine of snack food,” remarked upon the impossibility of not finishing a whole bag and spoke of favorite pairings — everything from Diet Coke to ranch dressing.

What exactly is going on with these Fritos? They seem to activate a brain chemistry that overrides our better nature. Everyone turns into a pig when they tear open one of these foil pouches. Salty munchies are known to make you hungry, which keeps you coming back for more. But why would this variant of the corn chip be more irresistible than the original formula, or another flavor, like Spicy Jalapeño or Chili Cheese? Is it because they alone take the structure of  “twists”? Even America’s foremost stoner, Snoop Dogg, tweeted in 2009 that they are his “favorite snake.” Probably he meant “snack,” or maybe this is a casual distortion of the word, but also, the comment may have held a double meaning: It’s a snack with a coiled, snake-y appearance. Snake snack. I mean, think about it. The man is a poet, after all.

One redditor proclaims that the Fritos Honey BBQ Flavor Twists beat every challenger on the fundamentals. “The best flavor and crunch out of anything,” they write, breaking down said flavor as “the right mix of salty, sweet and tangy.” This feels correct, although it doesn’t solve the mystery. The researchers who developed this incredible item may have been surprised themselves at how taste testers gobbled it up. There’s a hidden X-factor that nobody can name. As a result, the twists are terribly dangerous — a key to some deeper, depraved level of snackitude that defies convention and possibly science. It’s like a secret we were never supposed to stumble upon. A face-melting Ark of the Covenant… but sold at 7-Eleven. 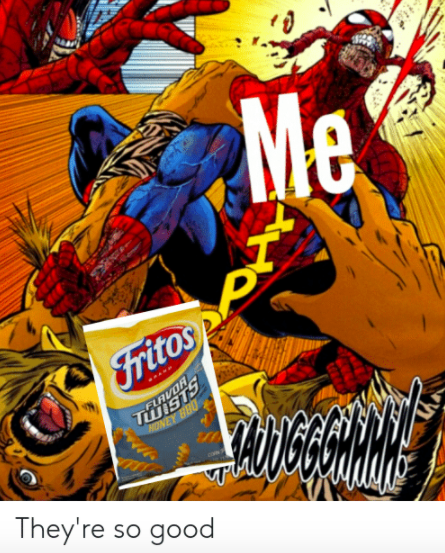 Short of a paranormal investigation, I’m not sure we’ll ever understand what we’re dealing with here. What I can say is: Be careful. The occasional bag of Fritos Honey BBQ Flavor Twists can become a weekly and then daily indulgence before you realize what’s happening. You’re playing with dark forces, and sooner or later, the devil will come to claim his due. It’s that much easier when he can catch you with orange-stained fingers. Hope snacking deliciously was worth it.