We Have to Stop Female Dirtbag Erasure

It’s too bad that online discourse can’t be harnessed as renewable energy, because a handful of topics will always spark a flurry of opinion, even if half the replies boil down to “why are we talking about this again?” The artistic merit of Marvel movies is one. So is the maximum allowable age gap between sexual partners. And then, of course, you have men’s beds.

To be fair, this is a nicer generalization than you find in the tweet’s many, many predecessors — the familiar trope is an unsheeted mattress on the floor — and it does exempt trans men, so, uh, an effort was made. But rather than rehash what men prioritize in their personal space, or even the ceaseless parade of “ugh, boys!” tweet-bait, I want to address the other side of this gender war. Because while we fight over dirtbag dudes, aren’t we’re forgetting the dirtbag dudettes?

Think, if you can, of any media representation for messy or squalor-dwelling women. It’s not easy! The first thing that comes to mind for me is the webcomic in which Max from The Goofy Movie sees Roxanne’s filthy apartment and candidly asks, “Damn, bitch, you live like this?” 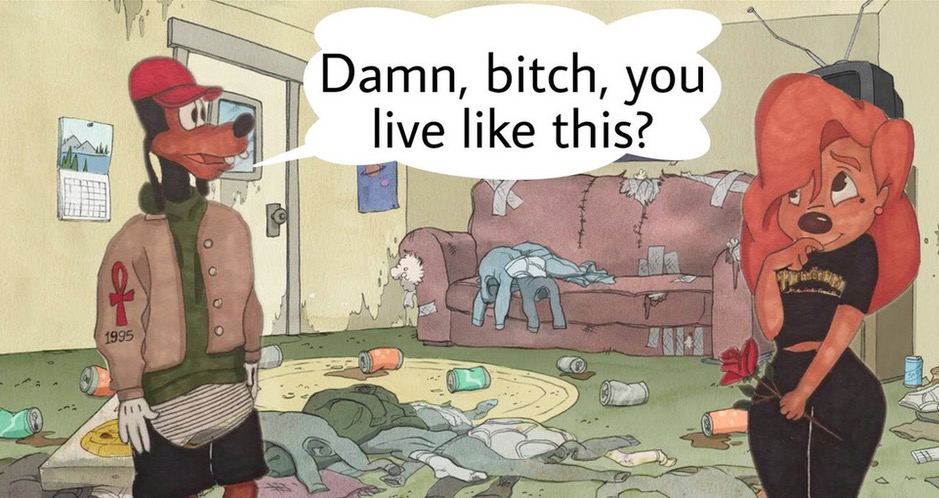 Yeah, it’s a cartoon, but it wouldn’t have any resonance or staying power if it didn’t convey someone we’ve all encountered and never seem to discuss: the hot girl whose home looks like a tornado passed through it. I used to live with a woman who wouldn’t throw away her trash, including snotty tissues — they just piled up in the crevices between couch cushions, or sometimes they’d cohere into a big, crusty wad. She wasn’t much for washing dishes, either. Once I went home with a woman who, I was horrified to discover, kept a few pet rats in a cage in her tiny Manhattan bedroom, and seemed perfectly acclimated to the stifling rodent smell.

Clothes strewn across the floor, refrigerators that don’t get cleaned out, missing phone cords and half-finished pizzas that stay on the coffee table… amazing. Women really can have it all.

From a casual survey, it appears that 80 percent of our exposure to female dirtbag energy on social media is cute mirror selfies with the caption “ignore how messy my room is.” Another 15 percent is people seeking advice for cohabitating with a girlfriend who won’t clean up after herself, and the remaining 5 percent is Facebook posts in which women say stuff like: “Who gotta vasectomy and get drunk with me tonight?” on their public timeline. None of this has prompted much in the way of men seeking viral success with sweeping announcements of women’s trashiness, immaturity or failure to care for themselves. It’s still just men’s mattresses.

The solution, of course, is not to start slagging off women as a group — that vile task belongs to the men of Red Pill and MGTOW forums, who indeed share screenshots of tattooed single moms on Tinder as “evidence” of abject femininity. Instead, we could stand to recognize that gender isn’t the best predictor of how a person maintains their living space: Economic status and mental health have much more to do with what you find in a person’s bedroom.

Lauren Lavín, the editor and writer whose tweet on “female dirtbag erasure” you saw above, in a DM to me notes some “weird moral purity and perhaps even subtle privilege guilt” in the ongoing “why are men” commentary. “The only reason this kind of stuff gets boosted is because of some final remaining uncannibalized #MeToo virtue-signaling that lets people think shit-talking the oppressors is the same as telling people you’re an ally or an activist or whatever,” she writes. “It’s often many of us in different groupings who find ourselves feeding it in some way or another, but in this specific context — and I can say this because I’m half white lol — overwhelmingly, white women do be sucking!”

And the more harmless form of suckage, I would submit, includes forgetting to take out the garbage, or letting the shower get a bit scummy.

If we can be forgiving of others’ habits, hygiene and preferred modes of comfort, we can move on from describing them as somehow systemic issues. And there’s always the chance that by occasionally pointing out where women are slobs, too, we’ll eventually quit holding them to a higher standard than men. The dream is to one day have everyone wallowing in filth together. Or maybe we already are, and we’re just afraid to admit it. Eh, I’ll do the laundry tomorrow.