Why Does the FDA Have a Flickr Page Full of Sketchy Boner Pills?

There’s something about gas-station sex pills that really gets my hog tingling. Maybe it’s the musclebound animals that line their packaging: hot-and-bothered gorillas, donkeys, dragons and rhinos. Maybe it’s the way the drugs are padlocked inside a cage in those piss-covered truck-stop bathrooms. Or maybe it’s the creative euphemisms for “hard” and “penis” that practically thrust out of the box, shaming me for not being fully torqued at that very moment. A great schlong supplement exudes danger and mystique. It brings out the inner eighth-grader in all of us: How could you not want to see what happens when you pop one?

Of course, that line of thinking can seriously mess you up. Without a doubt, these products are dangerous. They’re poorly regulated and often released to the public containing unknown amounts of drugs that are normally prescription-only. Guys who can’t take the real deal will buy these pills because the knockoffs don’t disclose the ingredients they contain — then they end up in the hospital. The U.S. Food and Drug Administration is forced to test the pills only after they’ve hit the market, and then warn the public when they contain harmful substances.

It’s a malicious industry, and the problem is widespread. A recent study on drug-tainted supplements found that those marketed for sexual enhancement were often the most tainted, followed closely by weight-loss and bodybuilding pills. From 2007 through 2016, of the 776 tainted dietary supplements identified by the FDA, nearly half of them were marketed for sexual enhancement.

So it’s not totally strange that FDA keeps an active Flickr account with nothing but photos of knockoff boner pills. 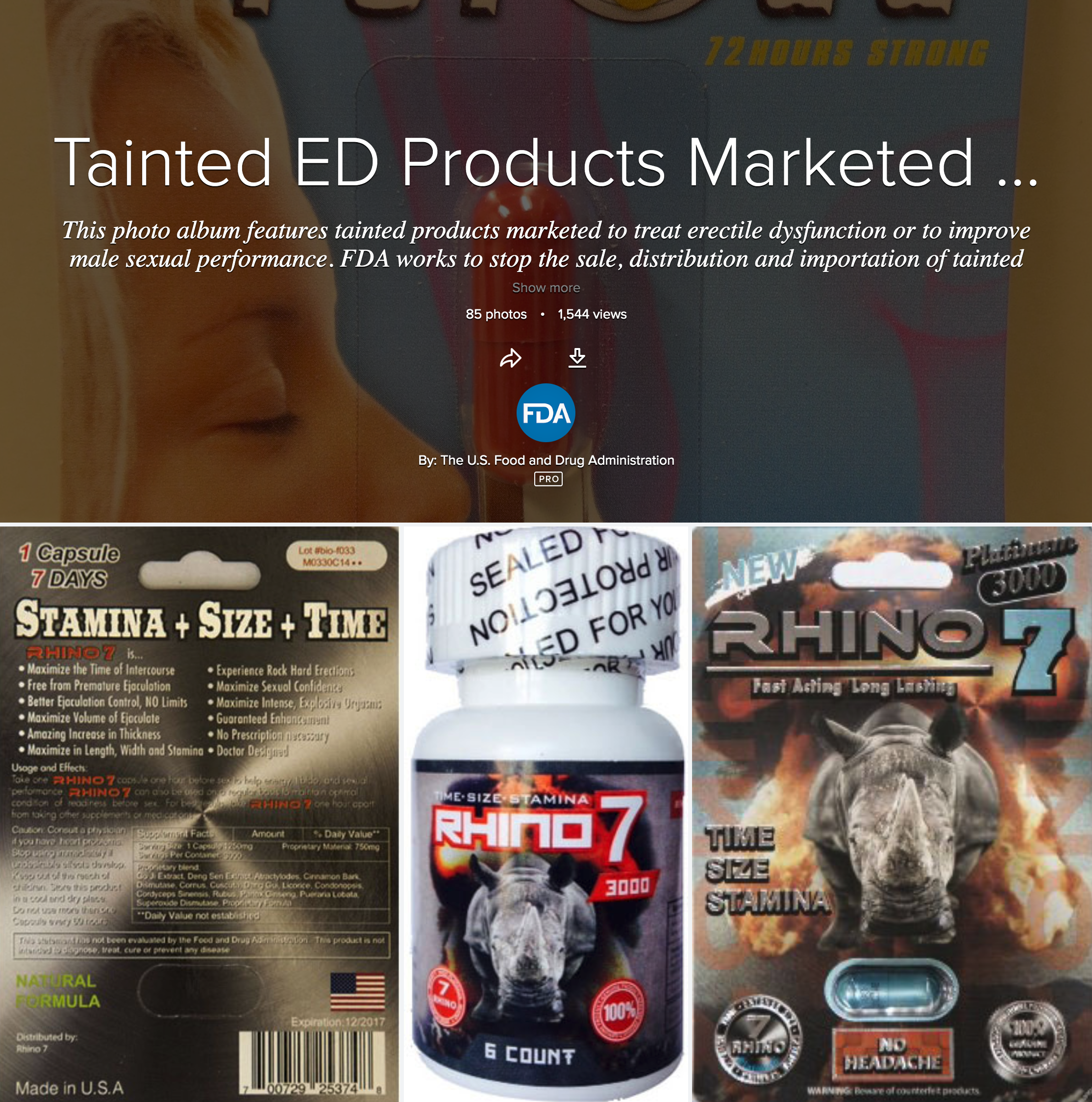 Nothing more, nothing less. No explanation of where they came from or what’s inside. Just a Flickr account — remember Flickr? — full of gas station boner pills, titled “Tainted ED Products Marketed as Dietary Supplements.” It’s a big ol’ collection loaded with image after image (about 85 in total) of products like “RHINO 7 Platinum 5000,” “Man of Steel” and “Man of Steel 2.” I needed to learn all about this delightful album and the working stiffs at the FDA who have to update it.

According to Jeremy Kahn, a representative for the FDA, the agency opened many social media platforms to share public health information years ago. The FDA is also on Facebook, Twitter and YouTube, he points out; Flickr is just one “vehicle we use to spread awareness of FDA’s public health mission.” The album of boner pills was created in June 2009, which means it’ll be celebrating its 10th birthday next month!

How much traffic could the FDA’s Flickr page actually get? Apparently, a lot: Kahn says the FDA’s Flickr account has been viewed over 30 million times. But the boner pill page has largely gone undiscovered. When I interviewed Kahn, the album had been viewed only 1,542 times, though some of the individual photos had about 4,000 views.

The products listed in this hall of shame aren’t just found in gas stations and convenience stores; they’re often sold on eBay, Amazon or even over the radio. “More recently, many of these products have been discovered as part of shipments intercepted by FDA investigators at our international mail facilities,” Kahn says. So it takes a pretty big network to stay up-to-date on all the supplements out there.

The FDA welcomes reports from the public — consumers and health care professionals alike. “Consumers who have experienced an adverse health effect that may be related to a dietary supplement, or who find defects in the quality or safety of a dietary supplement they’re taking, are encouraged to report it through the FDA’s MedWatch Safety Information program,” Kahn says.

If the FDA finds the ingredients in these dietary supplements to include anything unapproved or potentially dangerous to consumer health, they add it to their litany of potentially harmful products. This list is so long, in fact, that it spills onto a second page, titled “More Tainted Sexual Enhancement Products.”

So yeah, it’s funny that the straitlaced FDA has a public page of dick pills, but it’s important work.

In a blog post titled “FDA Lacks Ability to Effectively Safeguard Public From Risky Supplements,” the nonpartisan watchdogs at the Pew Research Center explain just how dangerous they can be:

Sexual enhancement (or “male performance”) supplements are linked to an estimated 500 or more emergency room visits annually. These products have been found to contain undeclared drugs, such as the active ingredients in Viagra (sildenafil) and Cialis (thiosildenafil), and sometimes in higher doses than in those prescription products.

In 2017, a 55-year-old man died after experiencing seizures caused by supplements for erectile dysfunction, including some that contained sildenafil and a related chemical. In some instances, men who cannot use Viagra or Cialis, because doing so could lead to harmful interactions with other regular medications, turn to supplements without realizing that they contain ingredients they should avoid.

However, Pew found that despite sending warning letters to manufacturers and issuing public health notices, “several brands continued to use the banned ingredients.”

Pew argues that posting pictures to a Flickr page and updating their website isn’t enough: “These problems stem in part from the agency’s lack of basic information about all supplements on the market and its lack of authority, according to its current interpretation of federal law, to order recalls of drug-tainted supplement products.” 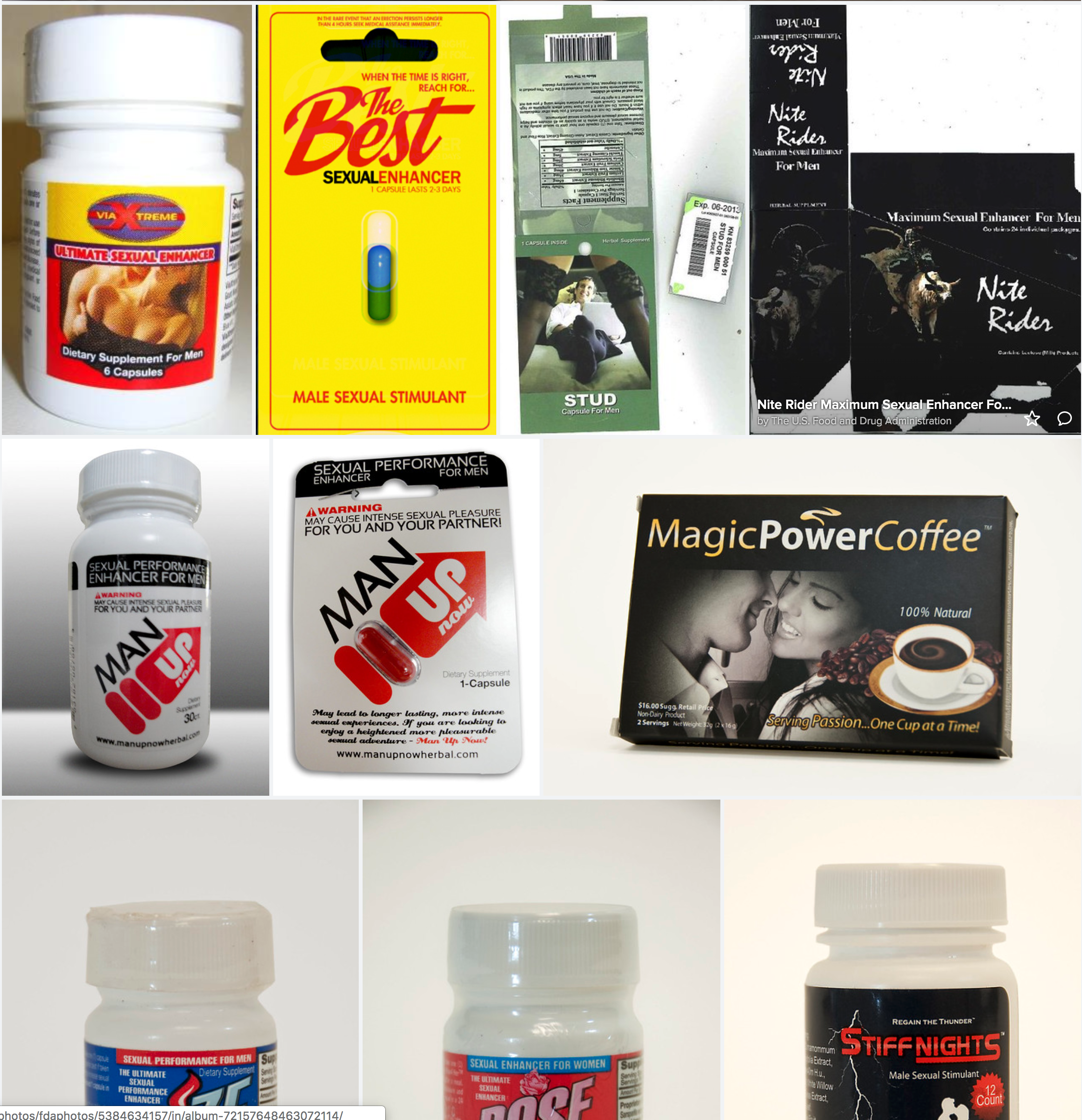 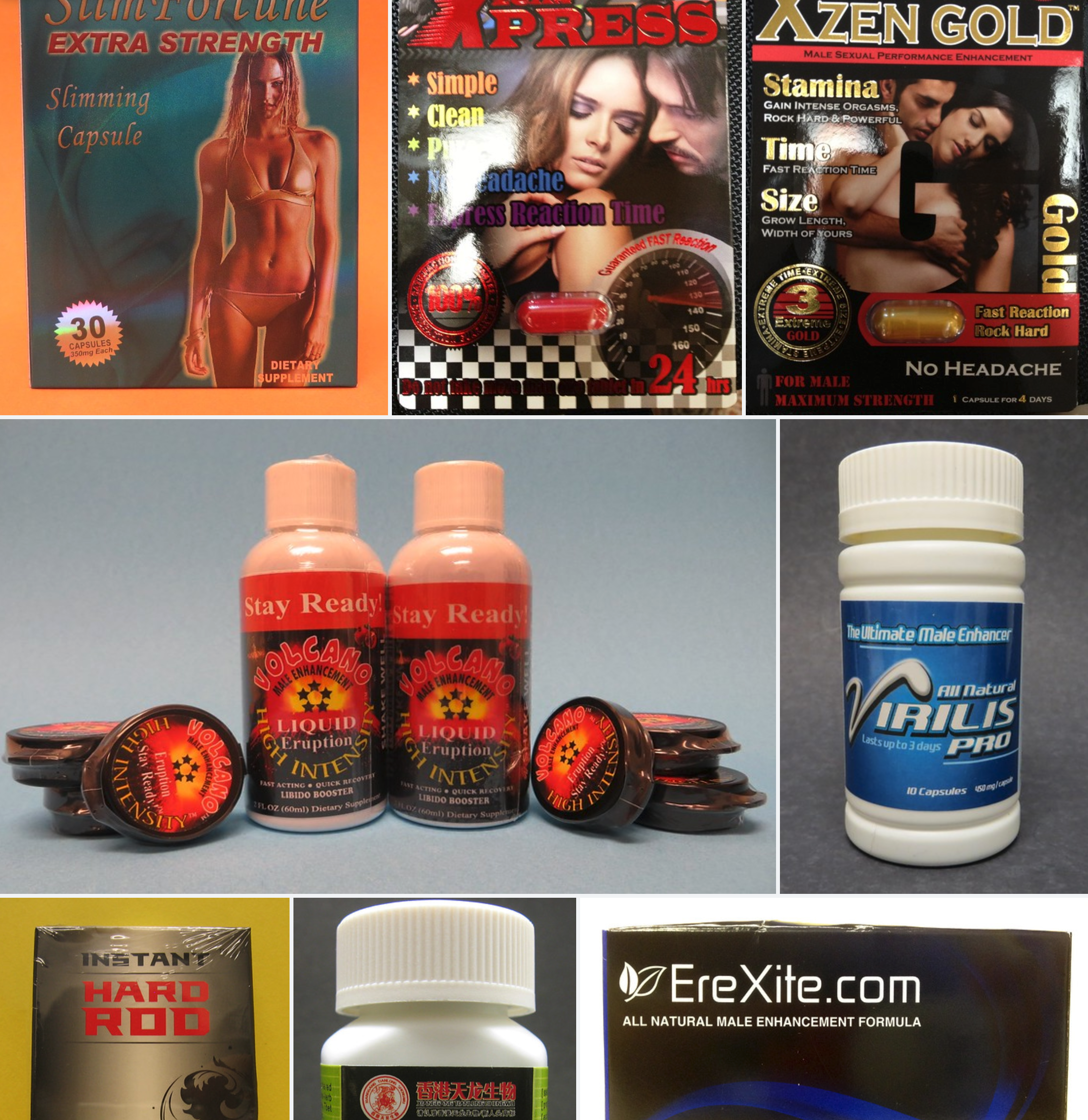 In other words, beyond simply issuing a warning, the FDA doesn’t do much. They don’t stop the distribution of these supplements or root out the suppliers — they just pray that consumers see their warnings before buying them. (Kahn responds, “[The] FDA may also investigate a specific product further, with the potential of taking additional compliance actions, if necessary.”)

Kahn points out that the FDA’s Office of Criminal Investigations has been “investigating a South Korean national living in the Los Angeles area for smuggling raw materials, producing Rhino capsules and distributing the misbranded drug products throughout the U.S. The case led to an indictment, which is being prosecuted by the U.S. Department of Justice.” The FDA, he says, is “committed to protecting consumers by identifying and removing these potentially dangerous products from the market. However, it is not possible for the agency to test and identify all tainted products.”

He advises anyone interested in products marketed as dietary supplements to talk to their doctor, do their research, report results to the FDA and “use common sense.”

“Claims that sound too good to be true probably are,” he says. “Search for information using non-commercial sites rather than depending on information provided by sellers.”

Take “Night Man,” a sexual enhancement product the FDA found to contain sildenafil. The box promises to “take effect in 10 minutes and last 72 hours,” but it also claims this: “Makes it big, long-lasting and increase sperms.” Might be smart to air on the side of skepticism for claims like that.

But before I let Kahn go, I couldn’t help but notice many of the packages were placed in front of a fabric I know too well: the boring off-white weave of an office cubicle. Does that mean the FDA has these in its office, and if so, what do they do after the picture’s taken for the Flickr account?

I ask Kahn three times what they do with the pills after they’re done photographing them. Each time, he dodges the question. Finally, I ask outright, “So they’re discarded after the FDA has intercepted and identified them?”

“Here’s what I can provide,” he says. “If an inspected mail package contains product(s) that appear to violate the FDA’s laws and regulations and the products do not meet the definition of a personal importation, the package may be detained. The FDA notifies the responsible party by issuing a notice of FDA action that will either state ‘detained’ or ‘detained/may be destroyed.’ For more information on the detention and hearing process, visit our Detention & Hearing webpage.”

So the mystery remains: Where are these boner pills going? Are they thrown out? Does the FDA throw raging, boned-up Skittle parties with them? Does some poor intern have an overflowing box of off-market boner pills on his desk “for record keeping”? How far does this conspiracy go?

Even electroshock dick therapy sounds better than that.