The Guys Who Pretend to Be Women on Twitter

Over the weekend, a mildly popular Twitter personality with the handle @ElleOhHell staged a bizarre late-night confession — one that was not received with the sympathy he appeared to expect. In a lengthy thread, he revealed that: 1) he had used the account to pose as a woman, 2) his avatars were most often images of his wife, and 3) the marriage had collapsed years ago, with divorce now in the offing. “Please note that I am not Gretchen and I did not try to get a girlfriend out of this,” he clarified at one point.

Who is “Gretchen”? Not the name of the soon-to-be ex-wife, as I first guessed. Rather, it was the chosen alias of another man posing as a woman — this time, tweeting as a grieving, elderly, well-to-do widow with a surprisingly crass voice.

Like @ElleOhHell, whose jokes occasionally made roundups like “The 20 Funniest Tweets From Women This Week” or “If These 2017 Period Tweets Don’t Make You Laugh, Then You’ve Probably Never Had a Period,” “Gretchen” filtered his humor through a lens of superficial femininity, amassing a sizable following. The ruse unraveled in December 2015, when “Gretchen” attempted to play matchmaker for a dude named Matt — the midwestern divorcé who had created her. MEL contributor Rachel Millman was one of the women to pull the mask off, as she recounted in a thread the following year. She also touched on the harm of Matt’s intimate deceptions:

That the man behind @ElleOhHell sought to put distance between his con and the Gretchen hoax by speaking to different intent — his account was “this creative outlet,” and “very liberating,” a path to “friendly” interaction — is itself fascinating. Because in a way, Gretchen-Matt’s horniness was the least of his crimes; it was the courting of trust in a simulation that really angered and baffled people. Moreover, @ElleOhHell was making a not-so-tacit claim that he couldn’t have had a positive experience on Twitter without swapping genders: “and honestly, who would want to be a man on the internet.”

In the early seasons of MTV’s Catfish, I was hypnotized by the social dynamics of seeking connection via disguise. Most of the catfish seemed to be experiencing a crisis of ego — they were so down on themselves that only by acquiring a false identity did they feel free to engage other people. What they had trouble admitting was that by entering into these unequal relationships, they exerted a corrupting power, not their “true” selves, as they often claimed. There is no road to authenticity that runs through a lie, yet when @ElleOhHell brought his to an end, men were ready to believe otherwise.

This commentary has the ring of unconvincing anti-racist sentiment — the “I don’t see color” or “I don’t care if you’re black, white, purple, green” talking point — and conveniently ignores the sexism baked into @ElleOhHell’s premise. In the first place, he operated from the assumption that in a public sphere, women wield greater control and influence, enjoying special liberties that an oppressed male class can only dream of. This is not only wrong on its face but a stone’s throw from so-called “red pill” ideology, in which young misogynists rant about how women get all the breaks and basically run the world. Then you have his puzzling segue into the disclosure: Early in his time on Twitter, another user allegedly told him, “some of us thought you were too funny to be a girl.” 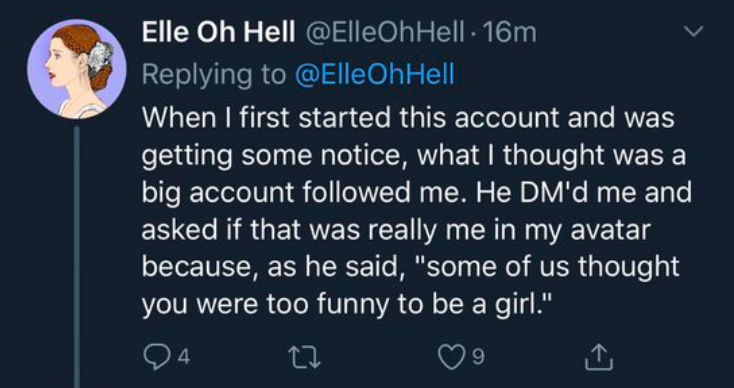 Why even mention this? Many who read the tweet in real-time imagined that @ElleOhHell was preparing to dox whichever skeevy bro had sent the DM. Instead, it was the launching pad for a come-to-Jesus talk, an acknowledgement of the @ElleOhHell character’s impossibility — you see, the author was simply too funny to maintain plausible femininity, and his natural talent pierced the veil. It would all come out sooner or later, so might as well be sooner. But is the nameless “girls aren’t funny” dick someone that @ElleOhHell believe they had betrayed? Did he feel guilt over the average dude comedian, who tries to make it big without total misrepresentation? Who was he even feeling sorry for, besides himself, a guy who has to give up his disturbing internet gimmick, which likely would have continued were it not for impending divorce?

It’s not as if he stood to gain much — at least not much you can’t attain as a guy.

Like the male authors who take gender-ambiguous pen names to publish their women-driven suspense novels, he slightly misjudged the material benefit to faking a female voice. Men are not constrained from publishing their thrillers or posting online in the hopes of sharing nice conversation. I can only conclude that, as with any other catfish, this wasn’t what @ElleOhHelle actually wanted. It was having the upper hand, the grand secret — not just talking to women, but women who thought of him as a woman — that he liked. And he clearly relied on this cover to flex his weird yet unmistakably male notion of authority, as you see in these DMs he sent years ago: 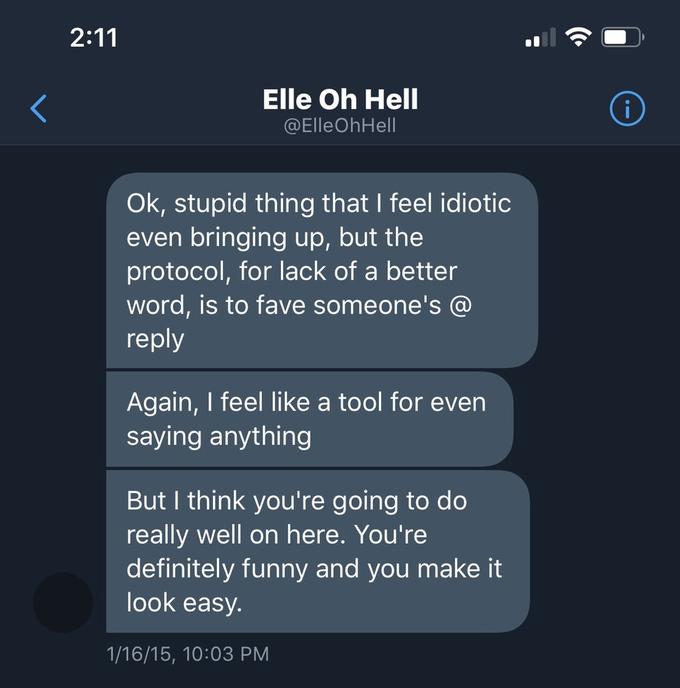 But no matter how often we exile creeps for this kind of behavior, we tend to see online strangers however they wish to be seen — until they give us a substantial reason not to. It’s the price we pay for the acceptance of our own profiles as genuine: affording that same generosity to everyone else. Dissembling has been the texture of the web for as far back as most of us can remember, and a whole generation came up scamming in AOL chat rooms, so it’s paradoxically easy to let your guard down, thinking you’ll spot the impostor a mile off.

What’s insulting in the @ElleOhHell racket and similar cases is the abuse of anonymity or pseudonymity, which have protected marginalized groups and individuals who cannot speak freely. We are willing to live with this obfuscation because we know it is sometimes necessary — and this has been exploited as a vulnerability by men who want attention, who have staked their success on the false idea that women are rewarded for their gender, not their achievement, and always have an edge.

To be honest myself, I’m still not sure how they came up with that theory.