Going Out to Eat Alone Is a Power Move

Have the confidence to dine in public on your own terms

A wholesome meme you may have come across this week spells out the opposing attitudes toward eating alone in restaurants. For some, the thought is mortifying, a nightmare of embarrassment and alienation. For others, it’s a chance to flex. 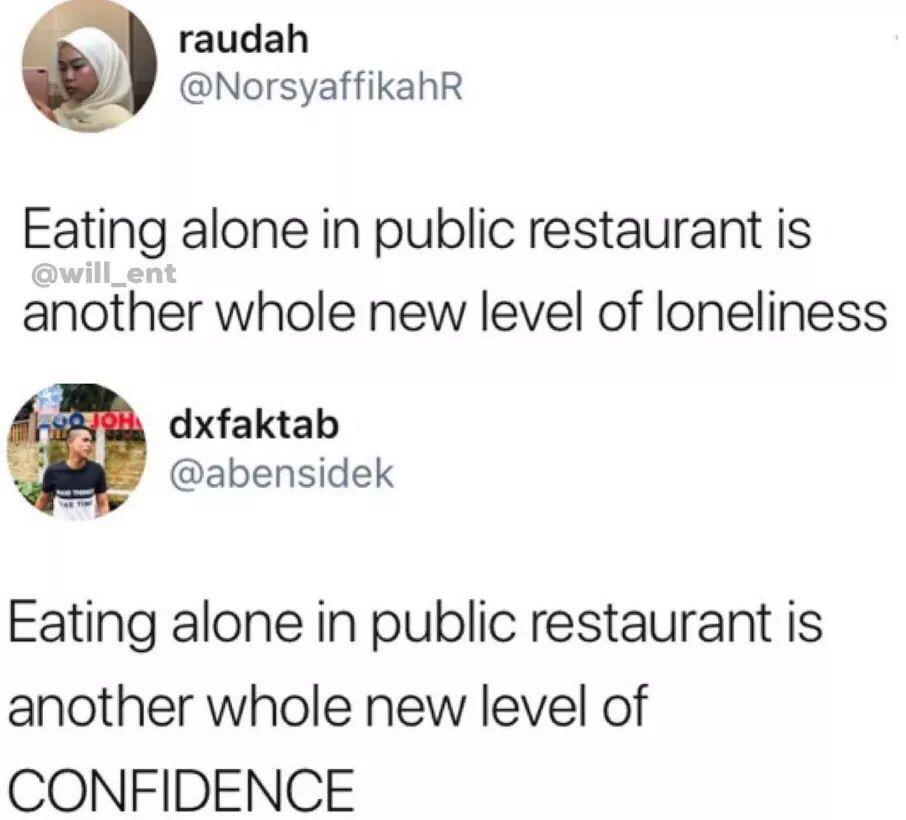 To be clear, the second opinion is correct. Going out to eat alone doesn’t project anything about you except that: 1) you’re hungry, and 2) you can afford to spend $14 on a bougie chicken sandwich. Staying in your apartment and ordering Seamless because it feels too awkward to say “Table for one” to a restaurant host? That ain’t it, chief.

Like a movie or a concert, food isn’t something that has to be enjoyed with a companion. Sure, a good meal brings people together — but it’s also a fine solitary indulgence. I remember a friend of a friend saying he liked to occasionally drop a tab of acid and take himself out for a several-course dinner in a high-end restaurant, savoring every bite without the imposition of a conversation. Personally, I’d find poring over a menu or pronouncing the names of French delicacies while tripping to be a bit much, though I get the idea. Sometimes you want the space to experience cuisine in a non-social way, without the worries of compromising on appetizers or splitting a check.

Though by the way, you’re still in public, which means you can eavesdrop on all the uncomfortable first dates and bickering married couples nearby. You could get a table by the window and watch whatever goes on outside. Or, hell, you’re free to ignore the surroundings entirely, dig into a book or play around on your phone. (I’m sure you’ve been meaning to delete some old tweets.) It all beats agonizing over what to cook at home, finally settling on yet another grilled cheese, and joylessly consuming it in your dark apartment as you stream an episode of The Office you’ve seen a few dozen times already. Don’t worry, Netflix and Hulu will still be there when you get back! Honestly!

Oh, and here’s an extra perk of eating out alone that you may not have considered:

Let me tell you about the bravest, coolest solo diner I ever witnessed. This was in P.J. Clarke’s, a legendary (though now overpriced and touristy) restaurant on Manhattan’s west side. As usual, the place was slammed. Right after my dining partner and I put our orders in, a single, average-looking dude is seated at the two-person table next to us. In a slight German accent, he asks the waiter for a cheeseburger, rare. When it comes, he dispatches it easily — not that he’s eating quickly, mind you, just with skill and purpose. The waiter inquires whether the cheeseburger, a behemoth that would have more than satisfied a substantial hunger, was prepared to his liking. “It was the perfect appetizer,” he replies, and proceeds to order a full rack of ribs as his entrée. We are awestruck.

Then the massive plate of ribs arrives, and he goes to work again. Within what feels like scarcely five minutes, he’s left with nothing but clean bones. Only now is he full. Bravo.

What I’m saying is, hitting up a restaurant without a crew is a king move. It’s a chance for you to do you. Nobody’s going to look your way and think, “Wow, what a loser, slurping down ramen without a friend to ask them how it tastes.” Especially not if you go to this ramen place where everyone literally has to sit in an individual booth. Anyone who can appreciate solitude while sitting on a park bench, riding a bike or thrift-store shopping can likewise master the art of chowing down independently in a local eatery.

You can do this. I believe in you. And for god’s sake, please get a side of garlic fries.