Eat Your Heart Out: Oyster Cóctel

‘These days, I think about it when I’m kicking it on a Sunday, there’s nothing on my plate and there’s nothing better to imagine than being teleported to that Mexico City street with an oyster cocktail in my hand’

Daniel Hernandez is a journalist, former editor of the news and culture site L.A. Taco, and most recently a New York Times Style reporter. Hernandez is Mexican American, born and raised in California, but he spent much of the last decade working for VICE and other outfits in Mexico. He is the 14th in a series of men we’ve interviewed about the dishes that — either through nostalgia or comfort — fill the soul.

I decided to move to Mexico City when I was 27. I’m 39 now, and moved back to L.A. only about three years ago, so it was a critical chunk of my adult life. Being U.S. born and raised, but also being Mexican American, I was always very curious about what that place was to me, or could be to me. I guess I was searching for a way I could situate myself within my culture. I wanted to find out if I was truly of Mexican blood, you know? Of course, in the U.S., I was told (and knew) that I was. But in other ways, it didn’t feel true at all.

It was a formative time, to say the least. It changed me in more ways than I can really articulate. I became the person I am today because of that place. I experienced extremes of both goodness and badness, not just of the contemporary state of affairs on this continent but about the human condition at large. It was a place where you’d find examples of both incredible hope and immense wealth — the very best of human nature and achievement — and then, in a literal hour, be witness to the absolute worst humanity can do or become.

Through that time, food became my anchor. After long, hard days, when you’re in need of comfort but just feel like the dumps, you need something to boost your mind and give your body energy. For me, that was the oyster cocktail from this little street stall by my apartment.

It’s a classic seafood stall named El Caguamo in downtown Mexico City, where the family that runs it has been overseeing it for ages. When I lived there, it was the most reliable place to go if I was rolling out of bed on Monday morning or Saturday morning, wanting to recover from a night of heavy drinking and eating. I knew I’d be treated well, while eating the best quality, cheap food you could have. Every time I go back down to Mexico, I make sure to stop by.

Funny enough, the oyster cocktail wasn’t something that was particularly nostalgic at first. I did grow up eating the standard Mexican shrimp cocktail, particularly in visits to Tijuana, and a lot of the mariscos I had were of that Baja style. But when I moved to Mexico City, a whole world of flavors and dishes became available to me. I learned one of the secrets for knowing whether a seafood cocktail was good or not — which is that it’s not overpowered by ketchup.

The oysters were perfect and came from La Central de Abasto, the original massive market in Southern Mexico City. As I understood, they use oysters from Veracruz that aren’t too big or small, just super fresh. The cocktail was maybe 80 or 90 peso [about $4.50], which is a step up from the usual 50-peso shrimp cocktail — so it wasn’t the cheapest food, but well worth it.

I think I’m always, in a vague way, looking for ways to replicate the flavors I became used to down there. And it’s hard! I don’t think there’s something particular about Mexican cuisines or the ingredients they have. Persian Americans feel the same after coming back from Iran, as do Korean Americans who eat Korean food in the homeland. It’s never quite as good without the local context — the sights and smells and space and feelings around you. Mexico is a place that’s constantly changing but stands still in time in some areas, too, and that contradiction makes for a rich eating experience.

These days, I think about El Caguamo when I’m kicking it on a Sunday, there’s nothing on my plate and there’s nothing better to imagine than being teleported to that street with an oyster cocktail in my hand again. A city like L.A. can be isolating, and it makes you realize that other places have developed in ways that are less dependent on personal vehicles, that have built up denser and haven’t had a resistance to public transportation. It’s not the same feeling here as just walking out onto the street in Mexico City and having these memorable culinary moments without ever making a plan. 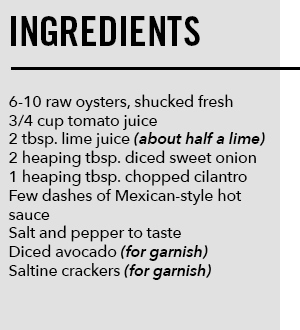 This dish hinges on you having the freshest oysters you can find. Get them live, keep them moist and cold in storage and shuck them by hand right before you serve. Look for smaller, sweeter specimens if possible, too. (Never shucked an oyster? Don’t be intimidated — try this guide.)

Open your oysters over a bowl, so you catch the delicious “liquor” as well as the meat. Pick out any shell fragments or dirt, and gently mix with all other ingredients, excluding the garnishes. Serve it with a chaser of crackers, some avocado on top, extra hot sauce and lime on the side if desired.