Will a Melatonin Skin-Care Routine Allow Me to Tan Without Any of the Sun’s Nasty Side Effects?

There’s an old wives’ tale about pregnancy that says that girls will “steal” their mother’s beauty. I know this because anytime my girlfriend gets a zit these days — she’s pregnant with our daughter — she reminds me about it and the master thief growing inside her.

The thing is, IMHO, I’ve also been robbed of my beauty. In my case, it was the six years I spent in the Bay Area in the mid-aughts, where I went from a tan adonis (admittedly, my words) to slightly pudgy and wicked pale.

The paleness really gets me. I’m not sure if it was San Francisco’s notoriously weird weather, or the fact that trying to get to the beach from my apartment in Russian Hill with no car was especially difficult, but the fact is, when I eventually moved back to L.A. in 2008, I was quite a few shades lighter than when I first headed north.

I can still get a tan, mind you — and a good one (thank God, too, because I look way better sun-kissed than vitamin D-deprived). Problem is, it’s gone a week later. That means I have to go back up on my roof weekend after weekend if I want to keep up appearances, which is a pretty good recipe for skin damage and/or cancer. The same can be said about fake tans, while spray tans are expensive and equally finite. Not to mention, my sunny rooftop deck has become a lifesaver after spending nearly every other waking moment indoors.

And so, cue the melatonin, which word on the street says should allow me to tan AND take care of my skin, serving as the perfect anti-sun-damage panacea. Yeah, I’m talking about the stuff you take to fall asleep, except in this case, you put it on your skin.

The Problem: I don’t want to feel bad about lying out for a tan.

The Potential Solution: Melatonin skin-care products. No, really — someone (probably an enterprising dermatologist) thought it’d be a great idea to take melatonin, a hormone that helps regulate sleep, and put it into different dermatological whosits and whatsits in order to ward off all the bad shit the sun can do.

Ever the creature of habit, I bought a melatonin-infused serum and a night cream, two categories of skin-care products I was very familiar with from my Korean beauty days. The serum was ISDIN Melatonik 3-in-1 Night Serum, which had come recommended; the cream was Peter Thomas Roth Green Releaf Therapeutic Sleep Cream Skin Protectant (with cannabis-seed extract — but of course). 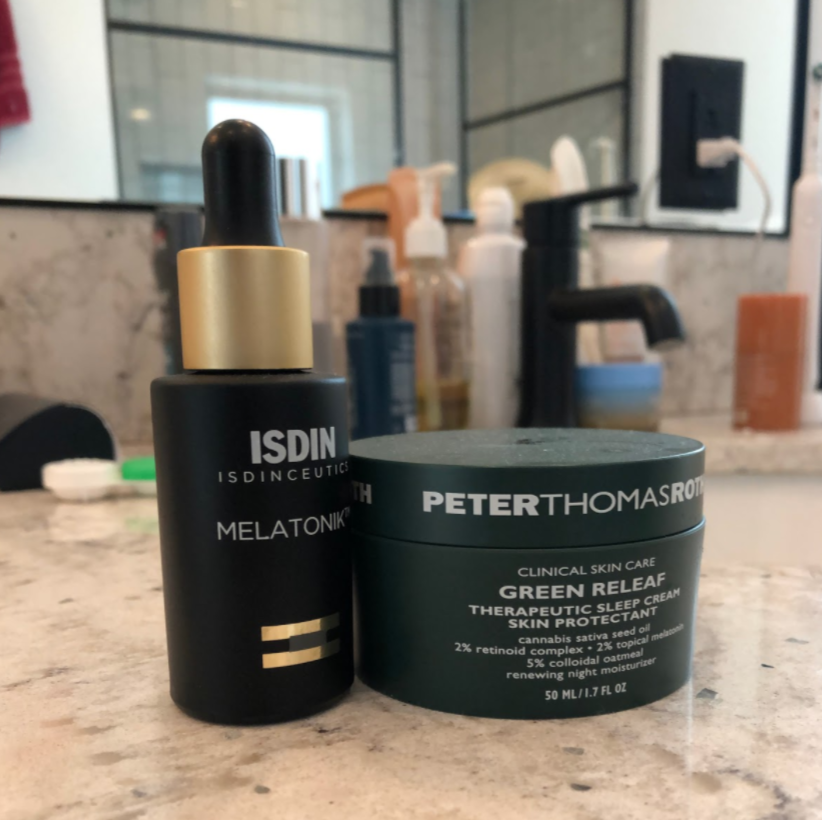 Cost of Preserving My Skin, and Ideally, Still Tanning at the Same Time: Priceless

What the Beauty Blogs Say: Elle says that topical melatonin products help “repair and restore your skin while combating signs of stress and pollution.” Shape says that melatonin promises to “repair mitochondrial and DNA damage.” InStyle says it can repair “pigmentation issues, and has demonstrated anti-tumor properties.”

No surprise that a bunch of beauty blogs hawking some melatonin skin-care products might sing the ingredient’s praises. But..

…What Does the Melatonin Science Say?: According to a study in IntechOpen, melatonin has been found to be “a highly effective antioxidant and free radical scavenger,” and boosts the production of other antioxidants like Vitamin C and E. That’s good for your skin, the thinking goes, because antioxidants can help reverse sun damage caused from powerful UV radiation.

So this is really going to work, right?

What the Board-Certified Dermatologist Says: “I’m skeptical,” says Robert Brodell, Chairman of the Department of Dermatology at the University of Mississippi Medical Center. “I’m skeptical, mainly, about a topical melatonin product being able to penetrate through the skin. Hormones are pretty large molecules, and they have to get past the stratum corneum and the epidermis. It’s like if you put a sheet of plywood between your skin and some medicine. Would that medicine get into your skin?”

Besides, he adds, “We already have something that works. We have tretinoin, aka, Retin-A. Tretinoin has been shown to pull out fine wrinkles and fade brown spots and maybe even help a little bit with precancerous, actinic keratoses in the skin.”

The One Thing That Melatonin Actually Does Really Well: Help you get to sleep, duh. No, seriously — take one or two 5-milligram tablets while you’re getting ready for bed, and by the time you get under the covers and halfway through an episode of Bob Ross, you’ll be down for the count, no matter your stress level. And it’s all natural!

The Experience: ¯\_(ツ)_/¯. Does it really matter at this point? The doc said topical melatonin doesn’t even work. Be that as it may, yes, I put both on every night for weeks in a futile attempt to counteract the sun damage I’ve experienced for three months now sitting on my roof for hours at a time.

Here’s my sun routine: I usually go up around 11 a.m., sit out for 30 minutes per side without sunscreen (feel free to sound off in the comments about how I’m giving myself cancer) before putting SPF15 on my face and body and sitting out another two hours. I know, it’s terrible for me… (That’s how we got here in the first place.)

Anyway, applying this stuff was at least nice. Particularly the serum, which smelled fantastic. The night cream, on the other hand, smelled like trash — and not like weed, to my surprise given it’s other active ingredient — and it made me mad to have to put it on after the serum each night (as my girlfriend likes to remind me, your skin-care routine should always go from the thinnest product to the heaviest).

If there was one thing that really annoyed me (other than the Green Releaf cream’s odor) was it always seemed to get in my eyes later on. Like, I’d be watching TV after getting ready for bed and I’d rub my eye, and the next thing I know, I’m doubling over in pain from getting this crap in my eye. Every. Time.

The Result: Unfortunately, I can’t speak much to the effectiveness of either product. First off, I assume that any wrinkle repair and brown-spot reduction would take months, if not years, of use. Nor did I notice any change to my skin color or texture — but then again, I’m no professional. That said, both the serum and the night cream made my skin soft and supple, without any dryness or tightness, which I thoroughly appreciated.

Second of all, even if it promised to start working in a week, the dermatologist says there’s no proof that the topical application of melatonin has the same antioxidant effectiveness that ingested melatonin does.

So, yeah, would I recommend it?

Hey, if you’ve got money to burn and like your skin feeling good right before bed, go for it. But if you’re not interested in blowing more than $200 on products that most likely don’t do what they’re marketed to do, maybe just spend a little less time out in the sun instead.