Can a Food-Sensitivity Test Solve All of My Stomach Troubles and Diet Woes?

Either way, I certainly bled for an answer

Don’t let anyone tell you different: What you consume as part of your diet and how that food affects your body is, in large part, a crap shoot.

Thirty years ago, for example, fat was the enemy. Now fat is good (within reason) and sugar is what we should all avoid. MSG was, for years, blood-pressure spiking poison and possibly carcinogenic; turns out, that was all racist fear-mongering, and MSG is a harmless flavor enhancer found in everything from the Doritos you snack on while you’re working from home to the tomatoes you put in your salads and pastas.

What’s that? Eggs are bad for you? Sorry, these guys say different.

It seems like a new study comes out every week about the foods we eat that turns on its head what we thought we knew about what’s good for us (and what isn’t).

So wouldn’t it be cool if we could take a simple blood test and definitively prove what our bodies can handle consuming, and what they can’t?

That’s where my head’s been at for a while now. Well, at least since I started watching what can only be described as a metric ton of Bravo since COVID took the world by storm. Watching said amounts of the reality TV behemoth (on the Bravo TV app, natch) exposes you to the same five or so commercials* that repeatedly run on the app.

Which is how I heard about Everlywell — i.e., through this very effective ad I’ve now seen, let’s say, 1,000 times:

Now, my tummy often doesn’t feel “right,” something I’ve long attributed to an addiction to spicy foods, cheese and bread. But, shit — you’re telling me it could be almonds?

Welp, Everlywell, you sold me: I gotta know.

The Problem: I get the tummy rumbles and I don’t know why.

The Potential Solution: The Everlywell Food Sensitivity Test, a finger-prick blood test that measures the IgG reactivity to more than 200 different foods, in order to determine what in the world gives you The Shits. Just kidding — not just The Shits, but any sort of negative reaction (bloating, fatigue, headaches, uncontrollable flatulence etc., etc.). 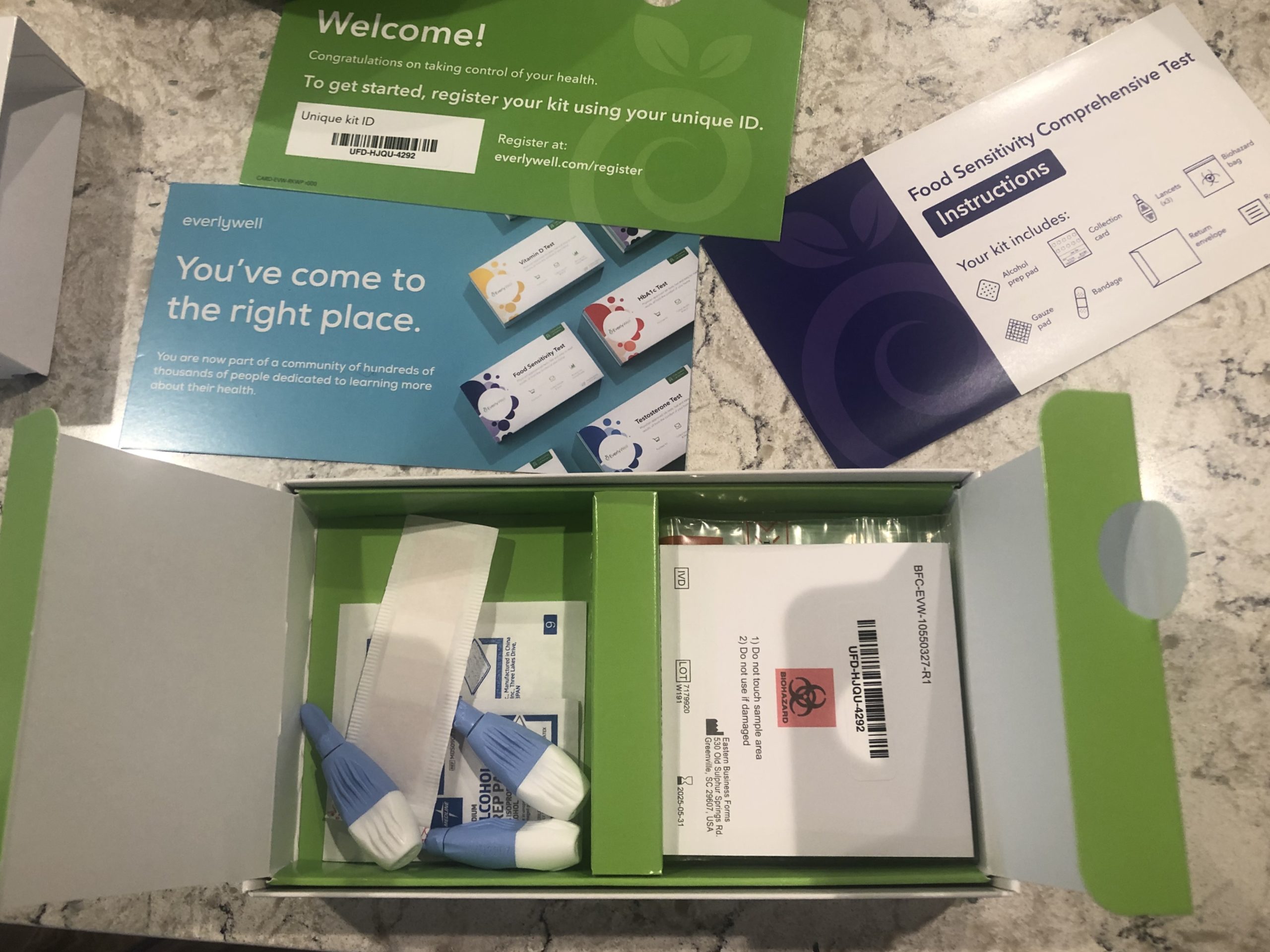 How it works is, they send you a testing kit with everything you need to prick your finger and draw some blood. Then you mail it back to them (after setting up a unique ID so they don’t confuse your blood with some other guy’s). Once they’ve received your kit, they re-reroute it to a CLIA-certified lab that tests your blood for high levels of Immunoglobulin G, an antibody that humans generate when something’s in their system that the body doesn’t like.

After your blood is tested, Everlywell provides a beautiful, easy-to-read and comprehensive report based on which foods had high, moderate, mild and normal reactivity levels, and a few articles on what your options are as far as what to do next.

Jeff’s Marketing Tips, Direct-to-Consumer Edition: As someone who’s worked in marketing for a well-known e-commerce brand, Everlywell really dropped the ball not trying to sell some sort of “fix” or subscription service at the end there to, you know, get their users hooked for life. Gotta talk to someone about that.

*Bravo’s Five Best (and Quite Literally, Only) Commercials, Ranked: We watch a lot of Bravo in our household, and I’m not ashamed to admit it — primarily, Real Housewives of New York/Beverly Hills/Potomac, Shahs, Summer House, Vanderpump Rules (shout out to Scheana Shay and DJ James Kennedy) and the boat shows (Below Deck and Below Deck Mediterranean).

But watching that much Bravo — specifically on the Bravo Roku app as we don’t have cable — you start to understand that the network only has, like, five ads running at any given time. You see them so much that it starts becoming unintentionally hilarious when you can recite all the lines and sing all the jingles. And, naturally, you start picking your favorites (and when I say “favorites,” I mean the ones that you hear playing in your brain in the middle of the night). These are mine…

1) Tecate: “Mexico is In Us.” The music is what does it for me. Well, that and a few nice flourishes — the ride across the 1st Street Bridge, the father-son bear hug. It’s touching.

2) Subaru: “Never Too Early.” We’re about to become parents, so this one gets us every time.

3) Everlywell: “#MyEverlyStory.” I bought the test, didn’t I?

4) Geico: “Idina Manzel.” This one should be higher (not sure why I’m telling you that, I made the list). Anyway, Idina Menzel has pipes, I never knew. What I do know, though, is every word to the show tune she sings. I especially like to belt out the “taxidermy/tax attorney” part.

5) CoverGirl: “Man’s World.” I just like this because of the Peaches song that sounds like a Runaways knockoff. Plus, there’s something funny about putting on makeup and then a helmet and doing laps on a motorcycle in what looks like Palm Springs in the middle of summer. But you do you, I guess.

The Experience: The best and worst part about the Everlywell test, at least for me, was the finger prick. I don’t like blood — or needles. And I certainly don’t like pricking my own finger, which is why I got my girlfriend to do it for me.

My first piece of advice if you ever decide to take this test (or any other test where you prick your finger, for that matter): Follow the instructions and prick the right finger. Evidently, if you don’t stab the right one — your ring finger — you won’t bleed as much as you need to in order to fill the TEN little circles that must be painted red “for the lab to get an accurate reading.” For what not to do, watch us royally screw this up:

Okay, enough of that nonsense, now watch what happens when you prick the correct finger:

That little stabber — known as a blood lancet — hurts. Call me a baby, but I feel bad for any diabetics out there. Not only does the prick hurt, but your finger hurts like hell for days afterwards. Which brings me to my second piece of advice: Prick the SIDE of your finger, not the pad. If you go head-on, you’ll be feeling it for days.

After I got done with the impalement and blood-letting, I sent off my kit to Everlywell for testing. Which brings me to my third piece of advice: Don’t pay money for a food-sensitivity test.

Why Food-Sensitivity Tests, As It Turns Out, Are Bullshit: Yeah, maybe I should have seen this coming. When I got my results back — surprise surprise — I didn’t have any sensitivities. Well, that’s not entirely true. I had one in the “moderate” category: 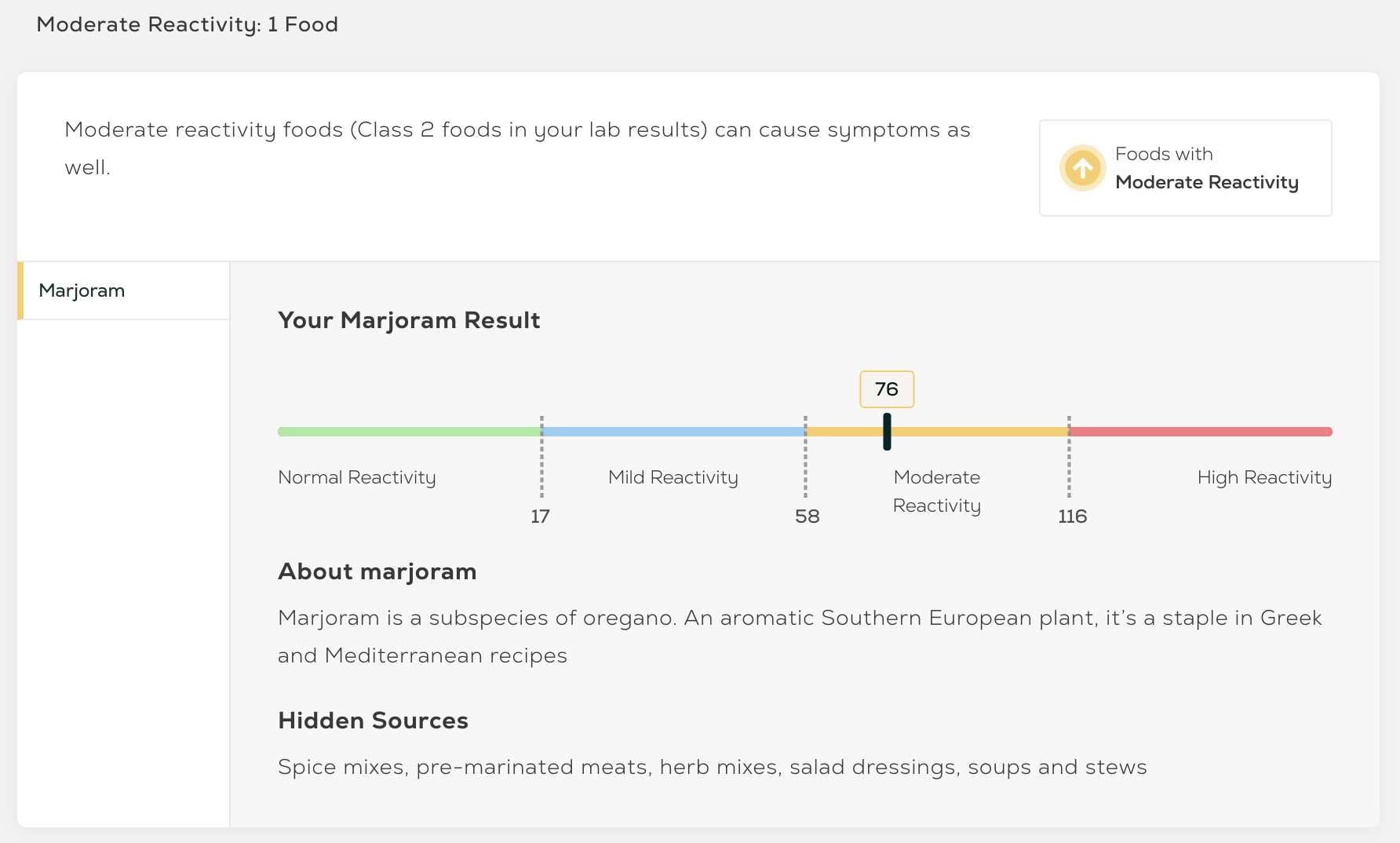 Sweet, marjoram. I think the last time I ate some marjoram was, shit, I can’t remember it’s been so long. I also had Brazil nuts in the “mild” category (another big part of my diet — jk, jk), but other than that, I paid $260 to find out I have moderate sensitivity to marjoram.

Frustrated, I got in touch with my favorite dietitian, Dana Hunnes from the Ronald Reagan UCLA Medical Center, to ask whether my not having any real food sensitivities was weird. “Yes, and no,” she responds. “It’s true that many people have some sort of food sensitivity, especially an intolerance toward lactose, since most people lose the lactase enzyme as they get older. But I wouldn’t worry about it, since this test you took doesn’t really have any valid or reliable results.”

“Food-sensitivity tests aren’t measuring much of anything other than the fact that a ‘foreign molecule,’ i.e, food, is in our body as opposed to any sort of immunological response to those foods,” Hunnes explains. “In the medical community, these tests aren’t considered reputable or reliable.”

Indeed, Hunnes sent me a link to the American Academy of Allergy, Asthma & Immunology (AAAAI) website, which goes into great detail about why these tests are bullshit. In short, they’re not scientifically proven to do what they say they do. And if they do show elevated levels of Immunoglobulin G, it’s “likely a normal response of the immune system to exposure to food. In fact, higher levels of IgG4 to foods may simply be associated with tolerance to those foods.”

Wish I had read that before I spent all that money and drew all that blood.

The Result: I think all of the above speaks for itself — the test was a waste of time, money and tears (from the blood, which was also wasted). But if there’s a silver lining, it’s that Hunnes did have one solid — and rather obvious — piece of advice: “If you find that certain foods cause you discomfort, don’t eat them.”