Inside the World of Bootleg Action Figures

Why wait for official action figures from your favorite old shows and movies when you could make your own (or pay someone hundreds of dollars to make it for you)?

No, The Sopranos creator David Chase never approved of the creation of a Paulie Walnuts action figure. Nor did he greenlight a toy of Bobby Baccalà in his conductor’s hat or Vito in head-to-toe leather, but if you want one badly enough — and you’ve got a few hundred bucks to spend — you can have one of your very own.

You’ll have to act quick though, as these sorts of toys aren’t only pricey, they’re extremely limited, with many even being one-of-a-kind. They’re also auctioned off much of the time, be it on eBay or in a gallery. That Vito toy, for example, sold on eBay for $855, while Bobby went for over a grand. Indeed, the world of bootleg toys has more in common with the art world than it does with anything you would have found at your local Toys ‘R’ Us. The reason for this is that, to many, these toys are a work of art — it just happens to be that the medium to make them is discarded portions of G.I. Joe and Star Wars action figures.

Not to be confused with the goofy knock-off toys that you might find for a few bucks at your local flea market — your “ninja tortoises” or “Specialmans” — bootleg action figures are part of a wider art scene known as “designer toys,” from artists who usually go by a pseudonym and who use plastic as their primary medium. In 2017, The New York Times published a piece offering an overview of this designer toy (or “toy art”) community, explaining the wide-ranging number of platforms consisting of resin sculptures, vinyl toys, plush dolls and a handful of others. No matter the materials used, though, what generally divides art toys from what you’d find in Target is that these toys are artist-centric, as opposed to being a toy from some established kids’ property. The toys are also limited and often numbered, much like high quality prints of an original painting. Similarly, the Times article chronicles the community’s struggle to be viewed as art, which echoes the same asinine conversations art critics have had for generations: Anyone even vaguely familiar with 1917’s The Fountain by Marcel Duchamp will know that the “But is it art?” debate is nothing new (and always pedantic).

When it comes to bootleg toys, they’re just one chunk of the designer toy world and, to outsiders, it’s probably the most accessible one, as bootlegs often touch upon pop-culture reference points. The Sopranos toys, for example, were created by an artist named Dano Brown, who explains to me that he got started making his own toys a few years ago after being inspired by another artist — Death By Toys — who made a series of Nintendo-based action figures. Over time, Dano’s work became popular and he began taking commissions, which is how his Sopranos line got started.

First up, he created Furio Giunta, Tony Soprano’s Italian-imported capo, as a commission piece. To do that, Dano followed the standard bootlegger practice of searching for a “recipe,” which means he looked through his trove of old, broken toys, as well as searching on eBay and the like to see if he could assemble something that looked enough like Furio to be satisfying. Ultimately, Furio was constructed out of a Twilight Zone figure and a toy from Buffy the Vampire Slayer. For the ponytail, Dano used a lump of clay, sculpted onto the back of the head.

Furio was originally supposed to be a one-off, but Dano created a second Furio when SopranosCon reached out and asked him to make another. Before doing so though, Dano says he got permission from the person who commissioned the original, as he’d promised them that Furio would be one-of-a-kind. The Paulie toy was also made for SopranosCon, constructed from the torso of Biff Tannen from Back to the Future, the legs of Lando Calrissian and the head of Ric Olié, one of the more obscure Star Wars action figures.

“Kitbashing” is the preferred term for this practice of assembling a new toy from existing pieces, sometimes with slight modifications (such as Furio’s ponytail). The toys are then painted to suit the subject matter. Kitbashing is one of the central actions that unite bootleg toys — that, and the fact that they’re totally unlicensed from whatever property it is they’re working from. “You’re stealing when you make a bootleg action figure,” explains Josh Kimberg, co-owner of Clutter Gallery, a toy gallery that dedicates an annual show to bootlegs. Kimberg explains that not only are bootlegs not approved by whoever owns the intellectual property, but that the artists are also stealing the parts from existing toys to create something else.

Because of this, Kimberg explains that the artists sometimes run into copyright issues, but these instances are typically rare because, generally, these bootlegs aren’t cutting into the sales of actual licensed merchandise. Also, he explains, “Most brands are savvy enough to know that allowing fans to use your work only enhances your brand. For example, by allowing [the artist] Sucklord to make bootleg Star Wars figures, it has contributed to a whole resurgence of Star Wars mythology in literally hundreds of artists. Along with Sucklord, these artists have made countless pieces of art that were sourced fundamentally out of the Star Wars universe.”

Sucklord, as Kimberg explains, is “the godfather of the whole scene. As far as many of us are concerned, he created the bootleg action figure.” Sucklord is a toy artist who’s been profiled by the likes of Entertainment Weekly and the Village Voice, also appearing on the Bravo show Work of Art: The Next Great Artist. He tells me, “Making toys has been a lifelong ambition for me. I was heavily influenced by Star Wars and a lot of my creativity was focused around Star Wars, G.I. Joe, He-Man and all that shit. Later on, in art school, I discovered that I didn’t have any talent, so I had to find a way to scam my way through, so I managed to convince enough teachers that making toy-related things could pass as art, and that turned out to be true.”

Following art school in the mid-1990s, Sucklord explains that he tried his best to break into the traditional toy scene, but failed to do so. He also tried to break into the art toy scene, which began to move over from Hong Kong in the late 1990s, but he also failed there. “I had something to prove and I knew I had something that no one else had, so I was forced to do it myself. I found the cheapest, hackiest ways to make multiples with silicone and resin and made angry little ‘fuck you’ toys.”

Silicone and resin, as Sucklord mentions, is a means by which artists can make multiples of their work. To do it, they create the original, re-assembled toy, then create a mold of that with silicone. Once the mold hardens, they can pour resin into the mold and create duplicates. Guys like Dano don’t do that, but many bootleggers do make multiples, though they’re often limited and all of them are hand-painted.

As for what “fuck you toy” means, well, Sucklord represents the other end of the bootlegging world. While a big chunk of the scene is dedicated to creating obscure characters from existing media, the other half of it is about parody, and creating toys that lampoon pop culture. Sucklord’s initial hit was back in 2005, when he introduced the Gay Empire line of toys, which was part tribute and part “fuck you” to his beloved Star Wars. The most famous piece from this was a neon pink Stormtrooper with a sizable codpiece. Since then, bootlegging has grown into its own community, with everyone from guys like Sucklord — who are looking to provoke and offend — to guys like Dano, who are looking to scratch the itch of fanboys who really, really want a figure of Bobby Baccalà.

Although the toys themselves seem to be the focal point, Sucklord stresses that the card art the toy sits on is just as important to the overall piece and in some cases, it’s more important (and not just because the toys aren’t intended to be opened). “The card art is advertising, and I love advertising — the typefaces, the graphic design. In a lot of ways, I almost feel like the packaging is really the important aspect and the figure is sort of there in a supporting role.” For an example, he cites an Old Bay Seasoning toy he made. “That [Old Bay] can is so iconic, so that one was about taking the layout and adapting it to fit the blister card. As for the figure, well, something has to go with it, so it’s something that looks vaguely like a crab — good enough.” 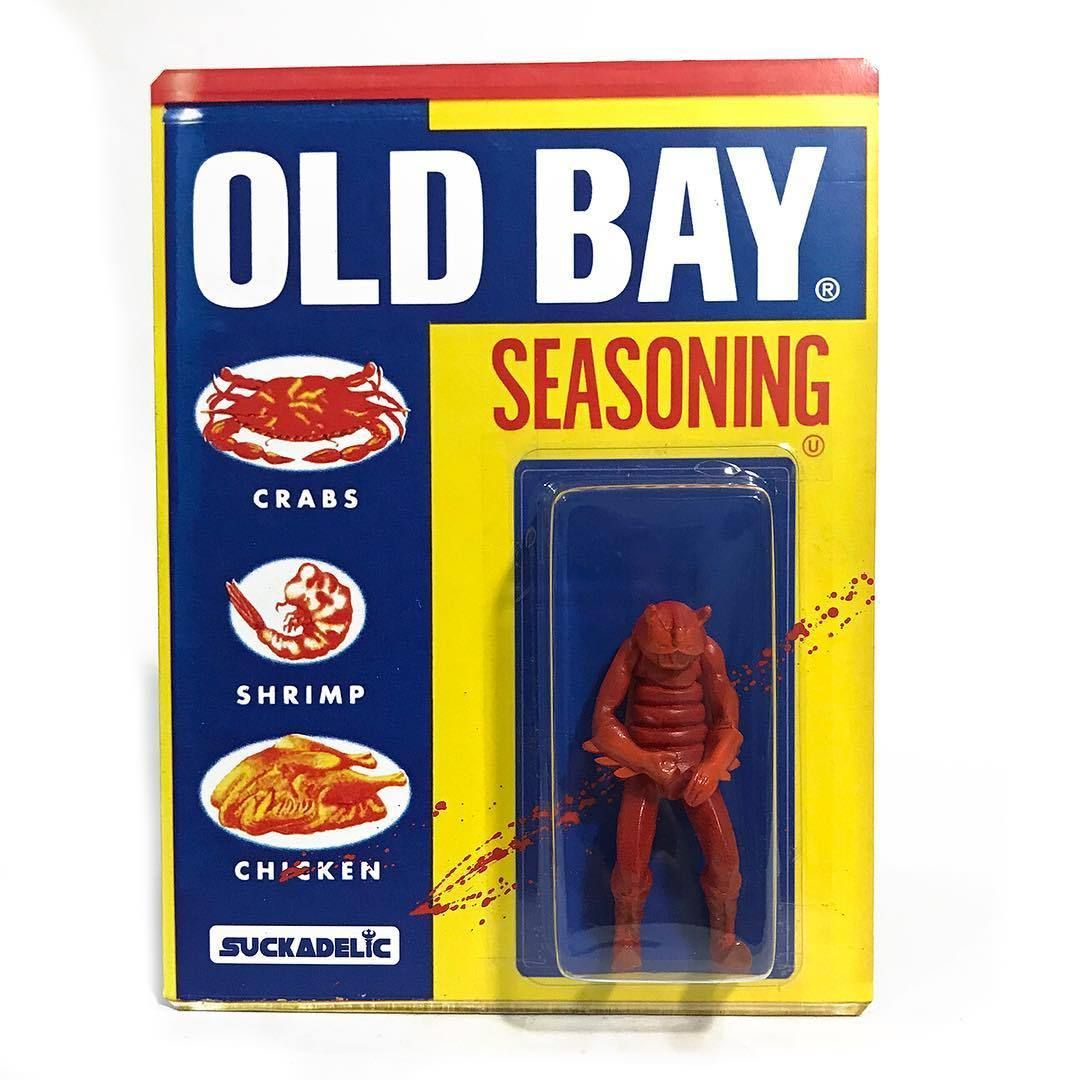 The Old Bay toy also neatly represents the central theme of bootlegging: the notion that anything can be a toy. For anyone who played with action figures as a kid — or who still collects them as an adult — the blister pack is a symbol for toys. As such, it’s become the platform for bootlegging, which is all about creating the toys that you’ve always wanted, but could never have.

Or as Kimberg explains, “Bootlegging comes from that primal teenage desire to have action figures that don’t exist and a whole community has grown out of this. All the bootleggers know each other and buy each other’s work and trade secrets and recipes. The best part about bootlegging, though, is that there’s no editor, there’s no barrier to entry and there’s no one to tell you not to do it. Unless, of course, your wife or mother comes downstairs and says, ‘What the fuck are you making?’”